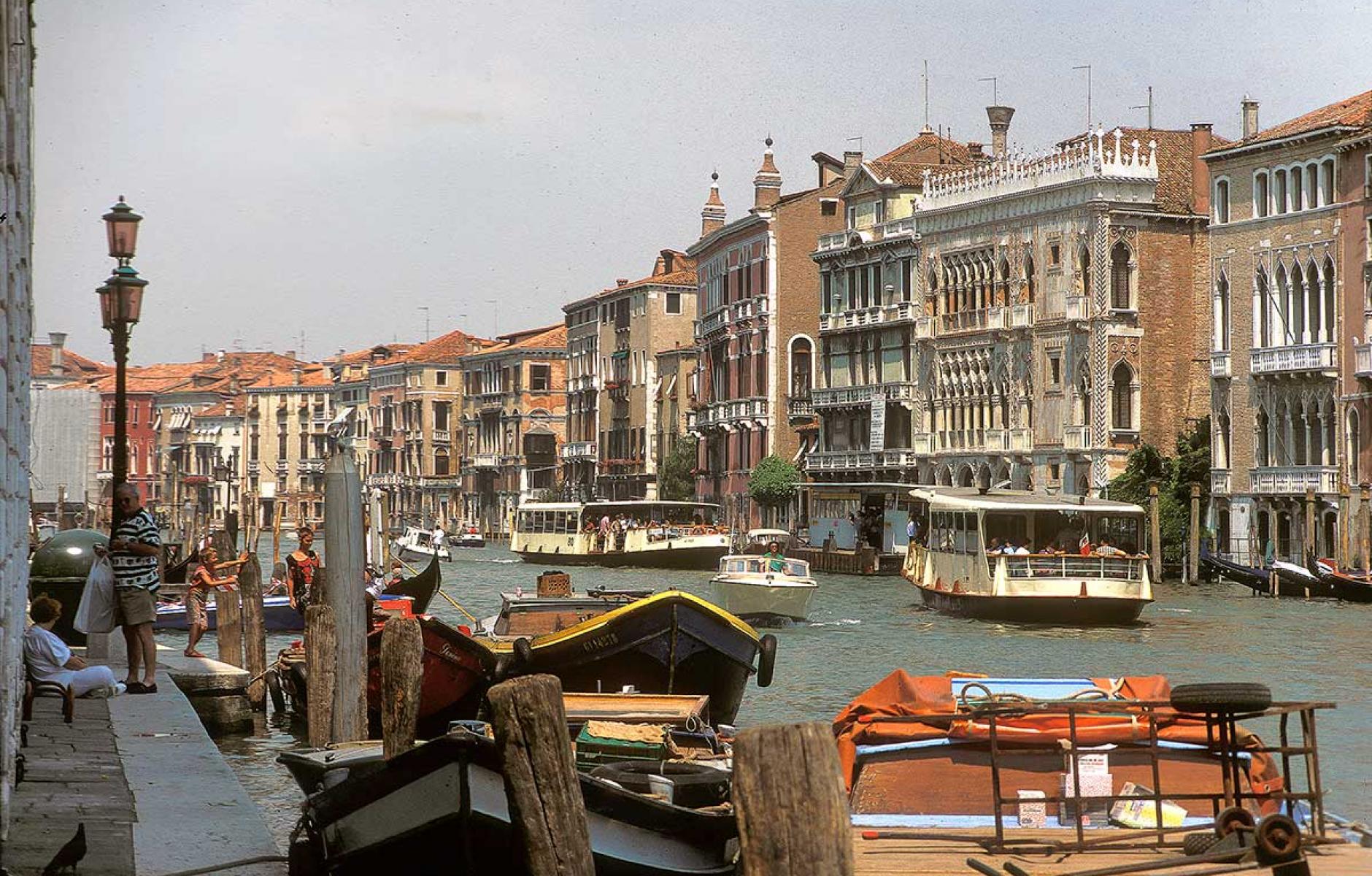 The Grand Canal in Venice. Source: Architecture & the City
Design

Architecture and urbanism in the climate change era

Architecture & the City, part polemic and part auto-biography, makes the case for how architecture should be taught and the city planned to address some of the world's biggest challenges—by learning from the past.
JOHN ELLIS   &nbspFEB. 22, 2021

A revealing pair of images in Michael Dennis’s magnificent new book Architecture & the City compare a selection of contemporary buildings from well known architects around the world with an image of Boston’s Back Bay. The former is a collection of weird freestanding sculptural shapes unrelated to place or climate in locations as diverse as Dubai, Bradford, or any Chinese city, while Back Bay’s rows of fine housing represent the virtues of the traditional city. Dennis is critical of how architecture and urbanism have been divorced from each other with the advent of modernism. The result has been the disintegration of the traditional city, sprawl and the lifestyles it has generated, which now threaten the planet through climate change.

Architecture & the City is an eloquent case for the rethinking of how architecture should be taught and for how cities are planned in an era of climate change. The book is part auto-biography and part polemic. Michael Dennis begins with his upbringing in a small town in Texas, his education at the University of Oregon and the revelation of what urbanism can be when he visits Florence for the first time. The delights of a compact, complex urbanism, rich in history and with buildings and public spaces deeply embedded in their urban fabric is the start of a lifelong journey of writing, teaching and practicing context-based architecture and city planning.

The book contains several of his well-known essays including a chapter from his famous book Court and Garden(1986) on the 17th and 18th century French Hotel; the history of the London’s Georgian terrace houses and squares; and the Venetian Façade. There are subsequent chapters on the history of the American town and campus design, which has been the main arena of Michael Dennis’ own architecture practice. In the chapter Lessons of the Lawn, Dennis explores the importance of Jefferson’s lawn at the University of Virginia and the figural space it creates in giving coherence to the whole campus through the design of the public spaces. He compares Jefferson’s plan with a fantasy plan without the lawn resulting in the incoherent jumble that is typical of many unplanned campuses. 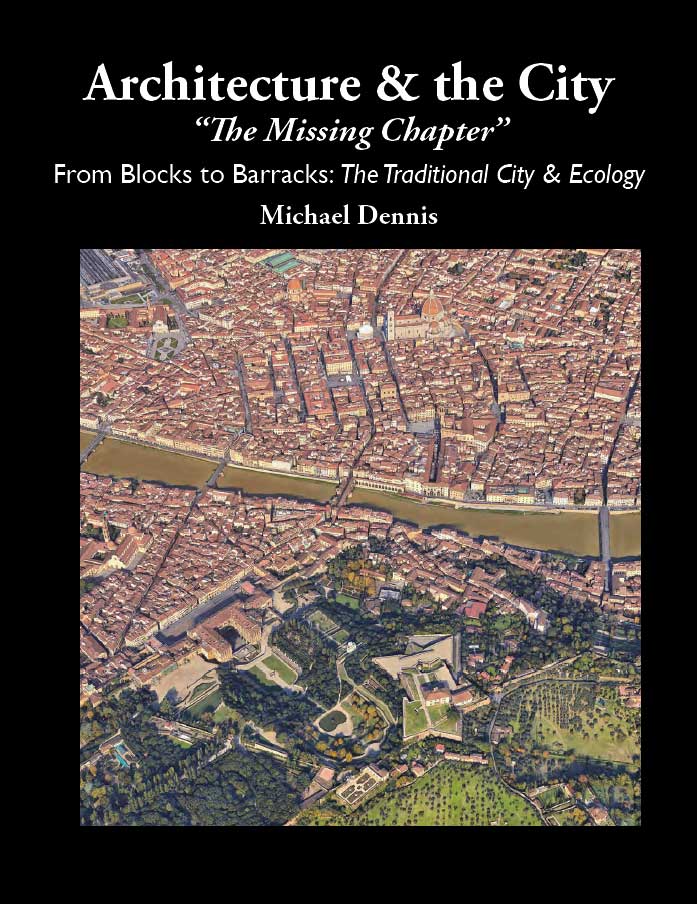 There follows a trio of chapters on Architecture & the City, Landscape and the City, and Urbanism and the City. They cover studios Dennis taught at MIT exploring research and design for a context based traditional urbanism in contrast to the modern city of CIAM-inspired design. Dennis pays homage to Colin Rowe and the Cornell studio and the impact this had on the rediscovery of the traditional city. He also acknowledges the importance of Leon Krier’s 1977 plan for La Villette in Paris that proposed a city plan composed of a street grid of small blocks organized around an armature of public space. In Landscape and the City, Dennis makes the case for rediscovering the tradition of the Garden in the City in contrast to the City in the Garden thinking behind the modern city. He illustrates examples and again contrasts Krier’s La Villette landscape designs to Le Corbusier’s Ville Radieuse. Urbanism and the City focuses on the tragic consequences of urban renewal and looks at the case of downtown Boston, where a third of the city’s historic fabric was erased in the name of progress and replaced with a placeless scattershot of object buildings. He comments that the destruction of so much of Boston in the 1960s would make you think that the city had suffered the ravages of WW2 bombing like so many European cities.

Another chapter covers examples from Dennis’ forthcoming book called Temples and Towns, a history of planned cities from Greek and Roman times to the present day. This promises to be a great teaching resource. It explores the models of Poggi’s plan for the 19th Century expansion of Florence and Cerda’s expansion of Barcelona. In both cases the lessons of city planning in terms of creating a coherent framework for development in the form of a street grid, appropriately sized blocks and public open spaces are presented as a model for contemporary needs. The chapter covers the history of planned cities, including: French Bastide towns, ideal Renaissance towns, Baroque new towns such as the rebuilding of Lisbon after the Earthquake of 1756, London’s Great Estates, Haussmann’s Paris, Vienna’s Ringstrasse, and, right up to present-day planning, places like Dubai.

This leads to the final section of the book which focuses on climate change and the prospect of a Sixth Extinction if we don’t change our lifestyles and reduce greenhouse gas emissions to sustainable levels. One of the most instructive sets of diagrams is a pair showing two ways of looking at Chicago’s greenhouse gas emissions. The traditional view is that the central city produced the most emissions, whereas in reality it is the most efficient in terms of auto use per capita, while suburbanites produce five times as much carbon as their urban neighbors. Dennis calls for an urgent refocusing on how architecture, city planning, and urban design should be taught and sets out the case for city building quoting Fred Koetter, who wrote that “the city is the greatest, the most complex, the most elaborate physical manifestation of human endeavor,” before going on to say that we must all be students of the city because this is where we learn our craft.

There follows a case study for the reconstruction of a typical small American town: South Bend Indiana, home to Notre Dame University. Like so many Rustbelt towns, South Bend has been hollowed out in the last fifty years as its former industrial core has collapsed, jobs and population have moved to the suburbs and the carcass of the city center has been replaced with parking lots and empty buildings. Dennis compares South Bend with Bordeaux in a pair of photo-shopped Google Earth aerial photos. Central Bordeaux has five times the population of South Bend with a tight urban grid, narrow streets, mixed-use districts and extensive public transit and is a beautiful livable city. South Bend is empty, monocultural, ugly, and unsustainable. Transforming South Bend will be a challenge, but Dennis illustrates examples of infill, including reducing the size of the excessively wide streets with new building parcels and creating a compact city fabric.

A potential missing chapter in this otherwise splendid book could include examples of sustainable urbanism from other parts of the world. Taking clues from work such as Harrison Fraker’s research in his 2013 book The Hidden Potential of Sustainable Neighborhoods there are examples of compact, transit-oriented urbanism with all the latest building technology in terms of energy efficiency, stormwater management, green roofs, and underground waste removal in places like Hammarby Sjostad in Stockholm, the Bo 01 district in Malmo and Vauban in Frieberg, Germany to offer a way forward. These examples together with a Green New Deal fueling a major program of public works infrastructure are needed to head off disaster in the next few decades as the realities of climate change threaten our survival.

This book is an essential resource for architects, students, and teachers. It covers a wealth of information, history and ideas that offer lessons on how we can address some of the biggest challenges of our times and to learn from the past. It is beautifully illustrated and designed with compelling text and commentary. A record of a life and career well lived. 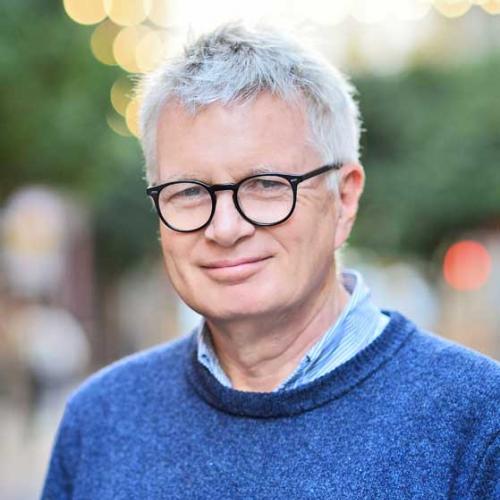