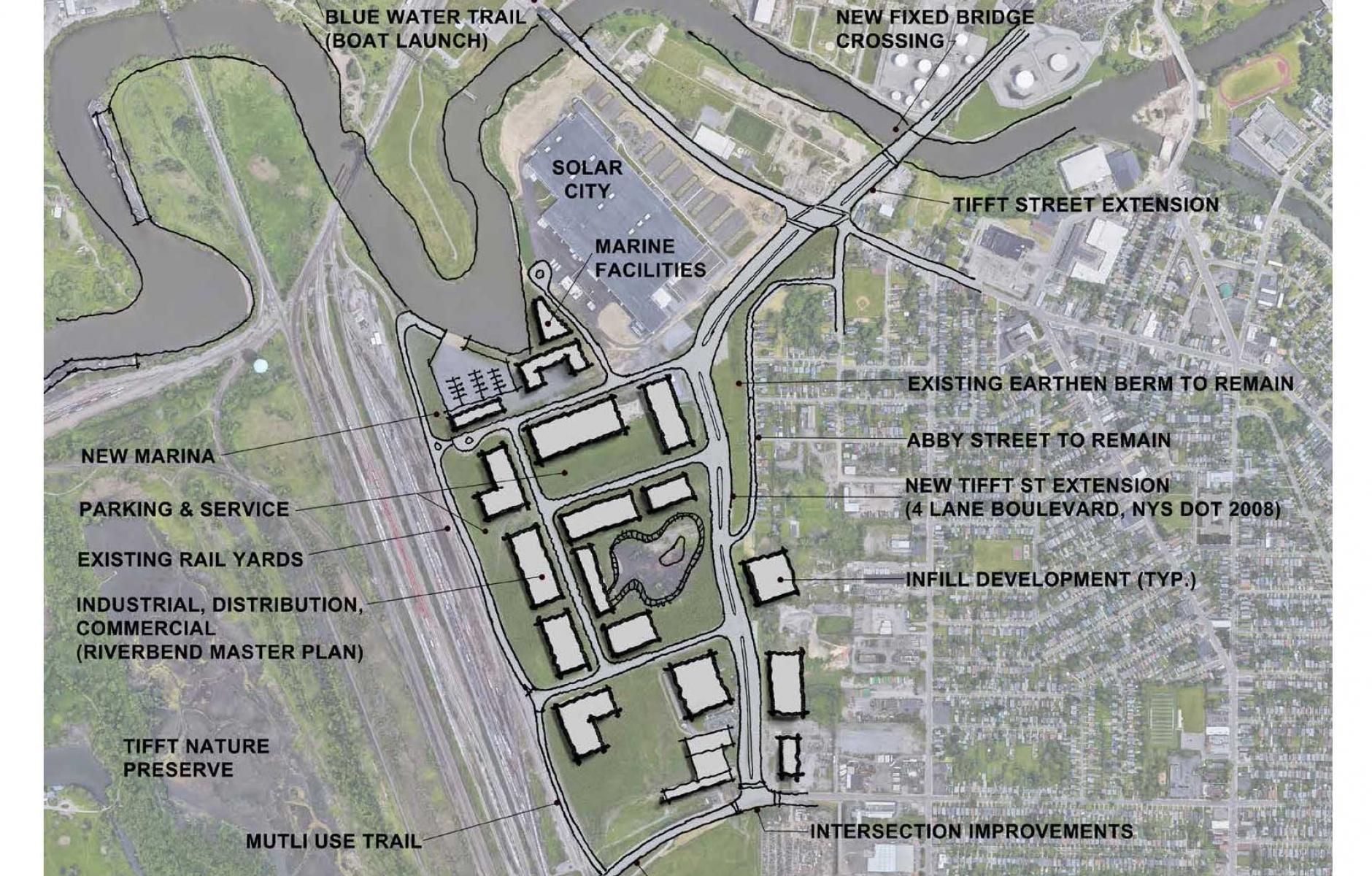 A new Tifft Street boulevard, from the City of Lights proposal in the Aim for the Sky design competition. NYSDOT has ignored designs like this and instead proposes new, highway-like streets.
Transportation

Current NYSDOT proposals prioritize the high—speed movement of automobiles—the design should be improved to focus on safety and community.
BEN CROWTHER   &nbspNOV. 17, 2020

Do you have a few minutes to spare for the City of Buffalo?

Two minutes, in fact. That’s all the additional travel time drivers will face if the NYS Department of Transportation designs a boulevard with a speed limit of 30 mph instead of 40 mph to replace the Buffalo Skyway.

At the end of August, NYSDOT released its scoping report that explores the removal of the Skyway, following Governor Cuomo’s Aim for the Sky design competition. The agency's willingness to remove the Skyway, an outdated piece of highway infrastructure at odds with the revitalization of Buffalo’s downtown, is commendable.

But NYSDOT has promptly disregarded all of the plans submitted as part of the competition, because they don’t fit nicely into its narrow assumptions for what a street should do (move cars at high speeds). The scoping report also operates on the false projection that the corridor’s traffic will grow, even though studies have shown declining numbers for the Skyway from 43,400 AADT in 2008 to 42,300 in 2019, and so dismisses every solution that doesn’t include building new roads, without even bothering to comprehensively model how upgrading currents streets would affect traffic.

Corporate interests are put before community interests, too. NYSDOT outright eliminates eight concepts that propose restoring the bridge on Michigan Avenue between Kelly Island and the Outer Harbor, which would provide the most direct connection to downtown for pedestrians, cyclists, and commuters. The reason? This connection has the potential to ‘inhibit’ the operations of the General Mills’ facilities on the island.

This leaves NYSDOT with two proposed alternatives to the Skyway, both of which prioritize speed over community and safety. The first alternative routes a new highway along the edge of South Buffalo; the second puts a high-speed, separated ‘boulevard’ along the same route. It is worth noting that the chosen route provides Tesla’s Gigafactory 2 easier access to Interstates 90 and 190, at taxpayer expense.

A highway to replace the Skyway is a non-starter. To start, it replicates the failed transportation policies of the past,which increase congestion by concentrating traffic along a single route. But more importantly, if the highway is built, around 270 South Buffalo homes will be within 1000 feet of the road, the minimum distance at which highway pollution is known to have severe negative health effects for residents, including increased rates of asthma, cancer, heart attacks, strokes, reduced lung function, and pre-term births.

That leaves the boulevard as the sole practical alternative if NYSDOT is committed to only these two options. But if it is to pursue this alternative, it needs to be a true boulevard, actually capable of supporting multiple modes of travel safely, and not a highway in disguise. Although details in the scoping report are sparse, it is sufficient to determine that what NYSDOT has proposed is a highway in disguise. The new ‘boulevard’ will feature speed limits of 40 mph as well as multiple on- and off- ramps. A shared-use path parallel to the ‘boulevard’ is a token gesture to the multi-modal demands of the Buffalo community.

If NYSDOT is serious about creating a true boulevard, there are several changes it can make to its proposed plans. The first is to design the boulevard for a 30 mph speed limit. Why is this important? Throughout the scoping report, NYSDOT makes nods to road safety and avoiding deadly conflicts between motorists and pedestrians and cyclists. The easiest way to achieve these goals for the boulevard is to design it for a reduced speed limit. At 40 mph, 80 percent of pedestrians hit by cars are killed. At 30 mph, that number is cut in half to 40 percent. Furthemore, this solution only adds another 2 minutes of travel time, if one was to drive the entire 2.4 miles of the boulevard. This seems like a more than reasonable tradeoff.

What does a boulevard designed for 30 mph travel look like? Examples can be found in the Aim for the Sky proposals, like the one shown above, but it is also useful to deconstruct the design features that make NYSDOT’s proposed boulevard unsafe.

To start, the boulevard cannot be separated. Separated roads present immense physical barriers to connectivity and encourage speeding in their vicinity, which results in a higher rate of cars injuring and killing pedestrians.

NYSDOT should then ditch any idea of 12’ travel lanes typically used for highway-like streets, which result in faster driving. The boulevard’s travel lanes need to be at most 11’ wide to encourage travel at the posted (and safe) speed limit. This is not a revolutionary concept; NYSDOT’s own highway design manual includes guidance for 11’ wide travel lanes on collectors, arterials, and truck access routes with a designed speed of 50 mph or less, which the proposed boulevard certainly qualifies as.

Next, NYSDOT needs to eliminate the ramps and slip lanes that connect the boulevard to local streets like Tifft Street and South Park Avenue. By not requiring vehicles to come to a complete stop before turning, these sort of designs once again prioritize speed over safety and increase the potential for drivers to injure or kill pedestrians and cyclists. Instead, NYSDOT should connect these streets to the boulevard through signalized T-junctures or traditional four-way intersections, which allow pedestrians to stop traffic and cross safely.

These fixes are much-needed improvements for this project, but they’re only necessary because NYSDOT continues to adhere to a model of road building that concentrates traffic along a single route. By limiting itself to solutions that only replicate the current conditions (i.e. a single street that handles all the Skyway’s trips), NYSDOT ignores other options and new ways of thinking about traffic. Rather than concentrating traffic, NYSDOT might consider dispersing it across several different routes, a method that other cities that have removed highways have found successful. There are additional alternatives out there, should NYSDOT choose to look for them.