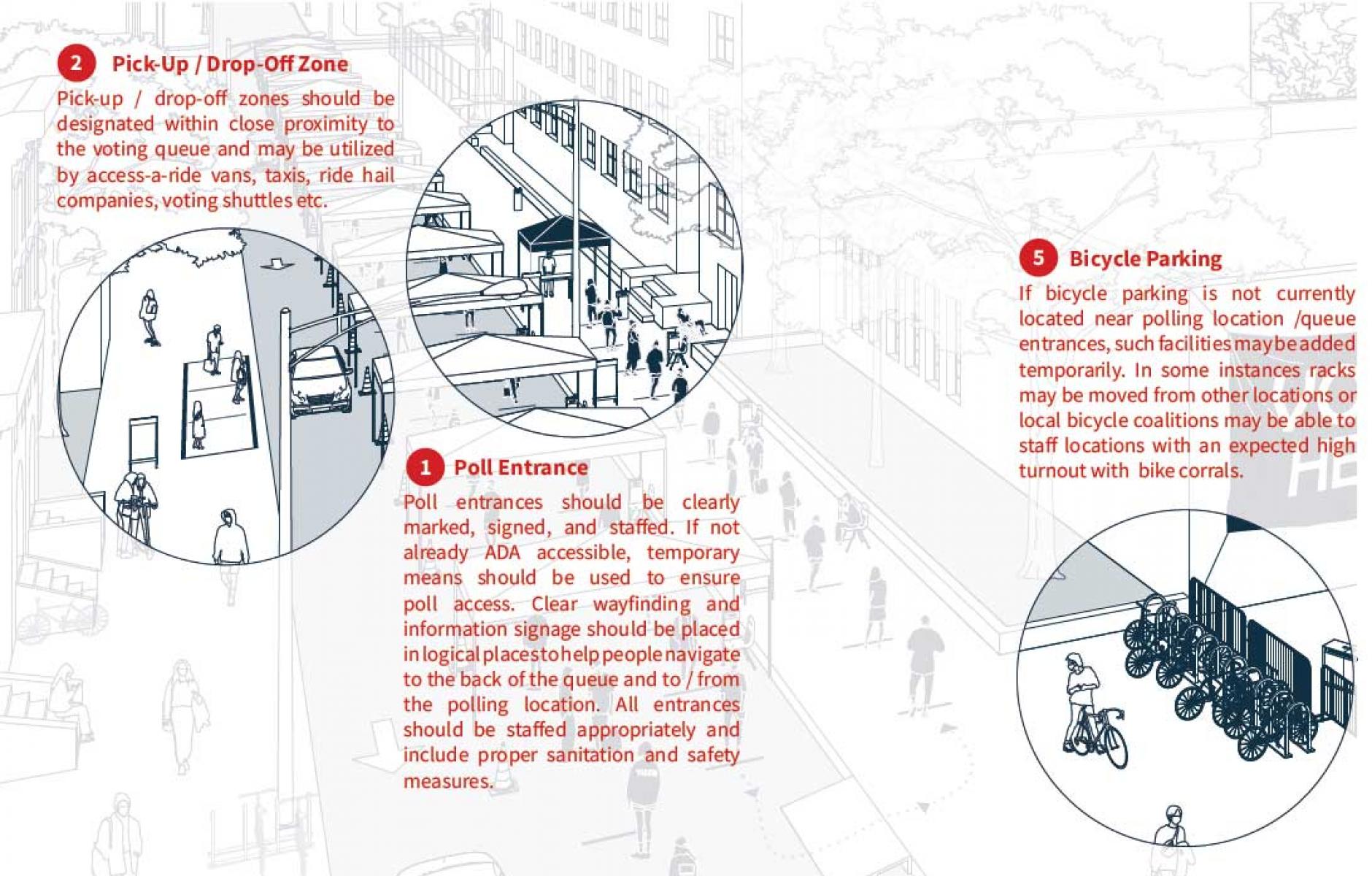 Streets for Voting is a useful tool for communities across the US struggling with new requirements for polling sites in a crucial election.
ROBERT STEUTEVILLE   &nbspOCT. 13, 2020

Whatever happens on November 3, we can be assured of big presidential election turnout. How do officials deal with lines at polling places that demand social distancing and protection of workers and voters during a pandemic?

Local governments and elected officials should consult Streets for Voting, a new report from the urban design firm Street Plans, in consultation with the Center for Tech and Civic Life, funded by the Futures Action Network. New configurations for voting aren’t just an idea—they are a requirement in 78 percent of states, the report notes.

This year’s challenges for polling include drive-through voting, combinations of indoor and outdoor voting, sanitation of facilities, social distancing in queues of people, and other requirements. Public spaces, including parking and travel lanes on some streets, will need to be reconfigured to add space for queues. For schools and other voting sites, traffic patterns will temporarily need to be altered and arranged for drive-through voting. The challenges are different depending on the context: Is the polling place downtown, in a dense urban neighborhood, a suburb, or a rural location?

The tools and practices of Tactical Urbanism, which focuses on fast and inexpensive changes to the public realm, are ideally suited to solving polling site problems this year.

While the problems are not overly complex given enough time and experience, communities do not have those luxuries. These challenges will need to be surmounted for the first time in living memory at tens of thousands of polling places across the US on a single day that is rapidly approaching. Nobody wants problems in any election—especially a high stakes election like this one—and officials need help in carefully thinking these issues through. The illustration of various scenarios is one of Streets for Voting’s best features. The report will help officials to picture the likely scenarios and the equipment that is needed (pop-up tents, social-distancing markers, traffic cones, spray chalk, hand-sanitizing stations, etc.), think through a plan that is time-and-cost-efficient, and implement that plan.

The report is useful, for example, in driving home the realities of queuing in drive-through voting or lines with six-foot spacing.

“Queuing cars are spatially inefficient when compared to people on foot or in wheelchairs. Indeed, voters arriving by car at peak voting hours may easily overwhelm a site’s queuing capacity. The average sedan is 15 feet in length so leaving just 10 feet between vehicles (front and back) yields a total of 35 feet of linear space per voting vehicle. Thus, what requires 600 linear feet for 100 voters on foot requires as much as 2500 linear feet, or 2/3rds of a mile in length, for the same number of people voting by car.”

Regardless of community type—city, suburb, rural—I urge local officials to download Streets for Voting and give it a read now. This could prevent problems on election day.