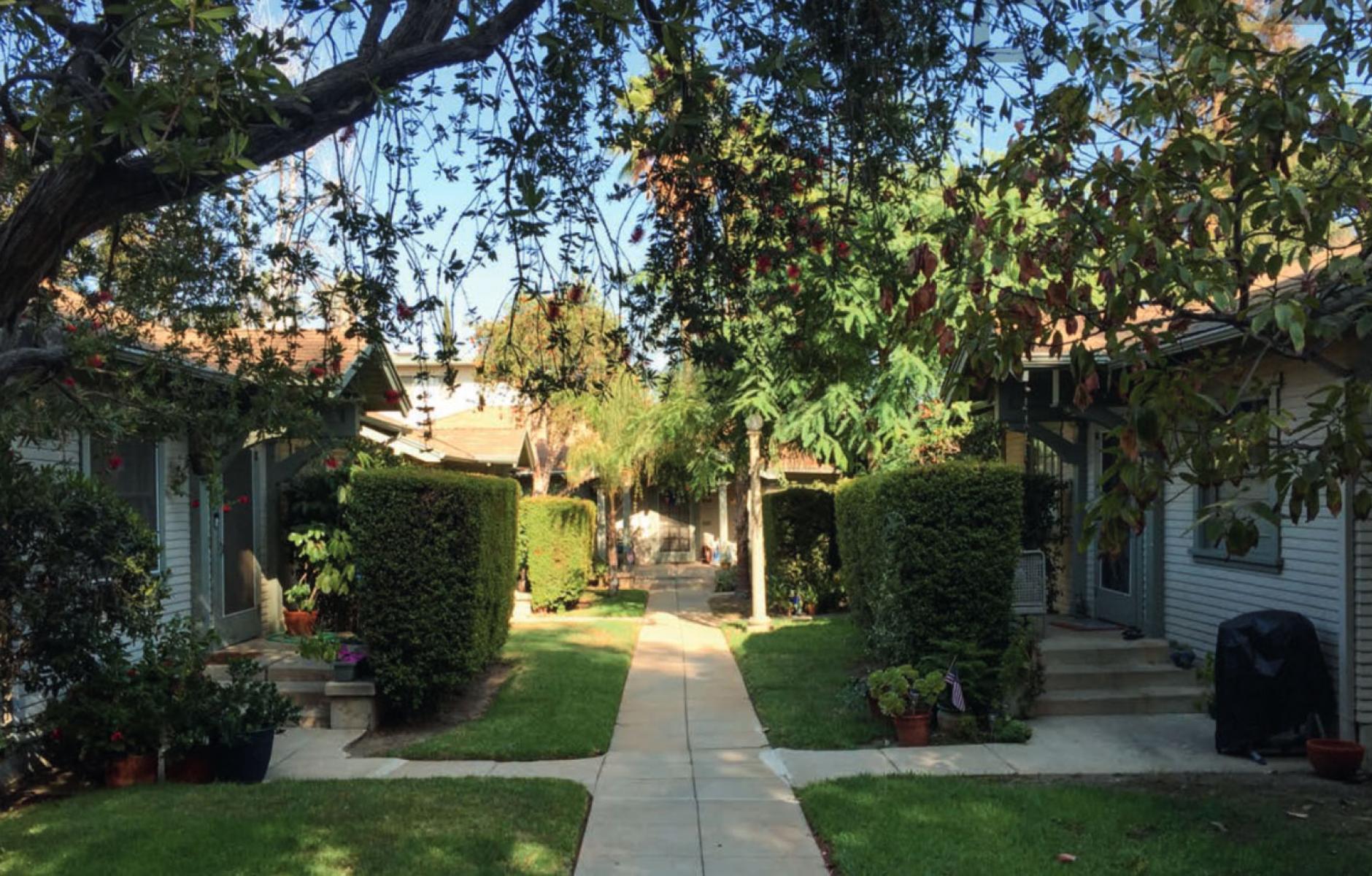 House-scale buildings with more than one living space can affordably shelter a broad range of families, revitalize communities, and profit builders throughout the 2020s and 2030s.
ROBERT STEUTEVILLE   &nbspAUG. 12, 2020

America has a surplus of large-lot single-family housing, both in cities and suburbs, and housing construction in coming decades will increasingly revolve around “missing middle housing” and other multifamily buildings. The missing middle—low-rise, smaller-scale multiunit housing—offers great promise for developers small and large to meet America’s housing needs, if public policies allow this housing to be built.

Parolek invented the term “missing middle housing” about 10 years ago, and it has since become a widely used term in the housing industry. The phrase is generally used to describe middle-density housing types between single-family detached dwellings and large multifamily developments.

Since the middle of the 20th Century, the production housing industry has focused mostly on the low- and higher-density extremes—hence the word “missing” in missing middle. Parolek describes missing middle as “house-scale buildings that happen to have more than one unit within them.” They look similar to, and can fit in with, blocks that include single-family houses.

Missing Middle Housing includes the technical details on design, construction, policy, and communication that will help professionals and policymakers. It belongs on the bookshelf or e-reader of urban planners, architects, builders, developers, code writers, and housing professionals. I can’t imagine a more useful—or readable—book will be published on these housing types anytime soon.

And yet, MMH can also meet demand of downsizing Baby Boomers, single-family households, and urban-seeking millennials—and these segments include the upper end of the market.

Within the same housing type or building, introducing a higher level of materials and finishes on the exterior and the interior of a unit, and sometimes adjusting unit sizes, is enough for the same unit to hit both [entry level and higher] market segments, the authors note.

The US housing market is shifting to favor missing middle housing, according to Nelson. Tens of millions of boomers and GenXers will downsize in the next two decades, away from single-family housing. Millennials and GenZ do not want large-lot single homes, at least to the same degree as previous generations, he says. Meanwhile, demand for walkable communities is growing. “The problem is that even if every home built between 2020 and 2040 were built in walkable communities (including MMH units and all other attached units), it simply would not be enough to meet the growing preference for housing in walkable communities,” he says.

The demand could be met, however, by retrofitting substantial numbers of former strip malls and enclosed malls—an approach that will require policy support, Nelson says.

The biggest challenge to building more MMH is the prevalence of exclusively single-family zoning. “It is illegal on 75 percent of the residential land in many American cities to build anything other than a detached single-family house,” reports The New York Times. Even if a city has zones intended to deliver small-scale, multi-unit buildings, development standards often include setbacks, maximum densities, minimum lot sizes, and parking requirements that hinder missing middle, the authors note.

Thoughtful parking approaches are needed. Reducing parking is usually possible due to the location in walkable neighborhoods; also, adjacent on-street parking is usually available; and, many one-person households choose to live in MMH. As a starting point, missing middle units should only be required to provide one off-street space per unit, the authors recommend. Ideally, there would be no off-street parking requirements at all—leaving this up to the market.

Additional barriers include impact fees based on number of units (thus penalizing smaller units), and communities where developers must expend considerable legal and entitlement resources to gain approval—putting small-scale developers at a disadvantage.

MMH is built with Type V, or simple wood-frame, construction. This means lower cost for developers, even while they achieve relatively high yields (i.e. density). Developers avoid the added financial challenges, complexity, and risk that come with conventional multifamily that is often falls into the Type I or III categories.

MMH can generate surprisingly high densities, even at two stories high: 16 to 35 dwelling units(du)/acre with one and two-bedroom units, and up to 85 du/acre with smaller units integrated, Parolek says.

Missing middle is often distributed on a block that also includes single-family detached houses. MMH can often be integrated on the short end of a block, or on lots adjacent to a commercial corridor or abutting higher density housing. A block with 18 single-family houses has a density of seven du/acre. Mix in missing middle and the block gets it 27 du/acre, even with seven single-family houses remaining. This block ends up with more living options, a greater diversity of households, plus some mixed-use. That density and mix support walking and transit.

On the cost downside, missing middle often exceeds thresholds that trigger different code requirements: the Fair Housing Act comes into play in any projects of more than three units; and the International Building Code is used with any building type of greater than two units. (One to two units is covered by the more lenient International Residential Code). Plus, providing public open space (inherent in some types like cottage courts) means that a condominium association may be required. This brings legal challenges and costs.

Fourplexes are “considered the Holy Grail of missing middle housing: very few for-sale fourplexes have been built recently due to many obstacles, and even newly constructed for-rent fourplexes with this stacked configuration are rare.” The fourplex is more efficient than four side-by-side townhouses, because it can fit on a narrower lot. Usually, the units are smaller than two-story townhouse units. “The value of this type is that it reads like a house from the street, but it has four units” thus generating the density required to support transit and mixed-use.

Most of Parolek’s missing middle examples top out at 2-2.5 stories. Only in carefully selected “Upper Missing Middle Housing” zones should these housing types be built at up to 4 stories, he writes. There’s a huge difference in perception between 2.5 and 3 stories, he explains.

The book provides case studies featuring some of the best missing middle designers. While the main part of the book is devoted to theoretical applications of the missing middle, the case studies show the true diversity of this concept.

Perhaps the most distinctive case study is Culdesac Tempe, a mostly “car-free” development “more in character with a Greek, Italian, or French historic village with irregular, narrow, meandering paseos … .” Culdesac Tempe “will be unlike anything built in the US in the past 150 years and unlike anything ever built in the Phoenix region because this region’s urban patterns have always been dominated by the accommodation of the automobile.” The residential architecture comprises seven variations of two- and three-story walkups that are directly entered from courtyards. There are mixed-use buildings as well. The development includes generous public and semi-public spaces, and is specifically designed for car-share, ride-share, biking, and is connected to public transit.

“Shared community spaces within missing middle housing foster a strong sense of community, which is highly prized for many renters and buyers, especially single women households,” according to the authors. Public space and a quality public realm are key, and they note that there are “diminishing returns on forcing too many units onto a lot.”