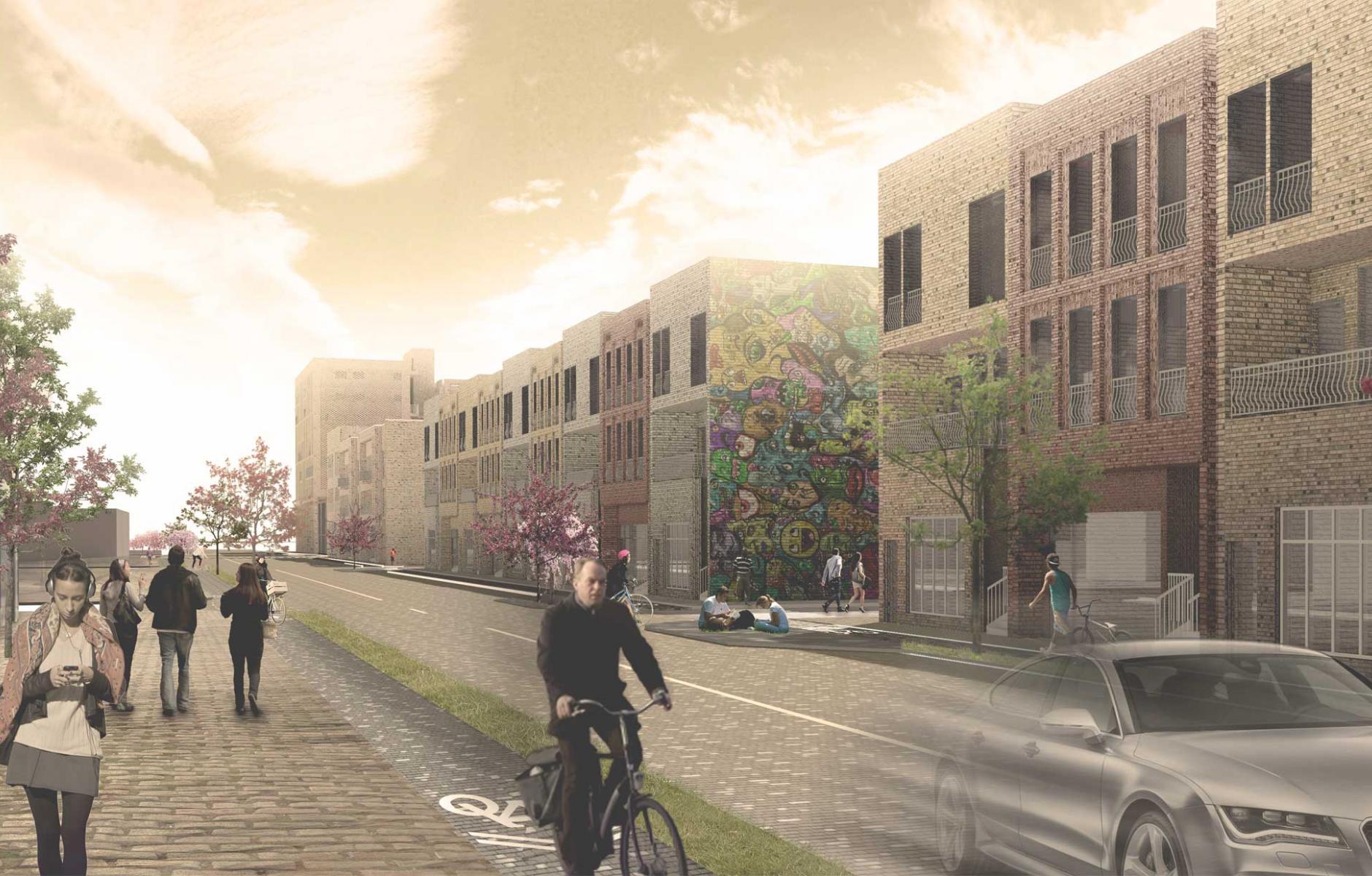 Along a commercial corridor, the students proposed walk-up apartments over retail that could be developed incrementally. (Project by Corey Blaskie, Adrian Bonnin and Frank Gibase.)
Equity

Using vacant parcels in a in a predominantly African American neighborhood in Northwest Detroit as a testing ground, a University of Michigan team modeled a development process that could support local residents as small-scale, novice developers.
KIT KRANKEL MCCULLOUGH   &nbspJUL. 9, 2020

One of the more pernicious forms of racial inequality in this country is the wealth gap between white and Black Americans. Income gaps aside, disparities in wealth are even starker, and worsening. Between 1983 and 2013, median Black household wealth decreased by 75 percent to $1,700 while median white household wealth increased 14 percent to $116,800.1 Much of the racial wealth divide is due to disparities in homeownership, the result of a long and deep history of racist housing policies. Nearly 75 percent of white households own their home, compared to 44 percent of Black households. This gap is even larger than it was when race-based discrimination against homebuyers was legal.2 The lack of ownership undergirds the crippling economic disparity that continues to plague Black America—without ownership it is harder to accrue wealth and pass it on to future generations.

This is why the work of groups like the Incremental Development Alliance is so important. Through training workshops and boot camps, often held in African American communities, IncDev gives individuals the tools they need to become developers and property owners. Small-scale development provides a path to ownership in accessible increments and builds wealth over time.

The public sector also has a role to play, through zoning and policy programs that can help create a fertile ground for small scale development and make property ownership more accessible. As cities reexamine the inequities baked into their zoning codes, we have an opportunity to explore how zoning and other city policies can increase Black property ownership and help close the wealth gap.

My students at the University of Michigan Taubman College of Architecture and Urban Planning sought to model an incremental development process that could support local residents as small-scale, novice developers. We used as our testing ground a stretch of vacant parcels in a predominantly African American neighborhood in Northwest Detroit.

At the time, out-of-town developers were assembling land to build large blocks of student apartments to serve the adjacent University of Detroit Mercy. While the city welcomed this investment, we argued the neighborhood would benefit more from an incremental approach that could help grow the wealth of the neighborhood residents by providing a path to property ownership. We identified eight steps to that approach:

1) Zone for types that are affordable to build

The students designed a neighborhood comprised primarily of smaller missing middle building types, including townhouses, fourplexes, and walkup mixed-use buildings. Zoning for smaller scale buildings not only allows smaller projects, but the buildings themselves are less expensive to build and can be financed more easily through standard mortgages. The lower development costs in turn can support more affordable rents.

In residential areas, the fourplex is an important building type. An owner may obtain a conventional FHA mortgage for up to four units. The owner can live in one unit and use the income from renting the other units to finance and pay off the mortgage. In Detroit, many residents own vacant land, often side lots acquired through the Detroit Land Bank Authority. An FHA mortgage for multiple units provides a means for developing their property.

The fourplex also helps meet the demand for rental units. The area the Taubman College students studied, adjacent to the University of Detroit Mercy, had been targeted by developers for student apartments. The proposed alternative—owner-occupied fourplexes—could provide rental units for students while ensuring the area doesn’t devolve into a student-only enclave, and at the same time create a stable place in the neighborhood for older residents who need to downsize. It is a way to build apartments for new residents without displacing the existing residents, who are able to strengthen their stake in their neighborhoods and build wealth through ownership.

Many cities, inspired by Minneapolis’ new zoning plan, are considering up-zoning their single-family residential areas to allow multiple units on a single lot. Not only does such up-zoning gently increase density and create more rental housing, it can help increase homeownership as well. Residents can build income-producing units that help finance their own homes. Black applicants are far more likely to be turned down for mortgages than other racial and ethnic groups, with the ratio of their debt to income the most common reason cited.3 Potential income from additional units can improve that ratio.

3) Zone for building types that support live/work and entrepreneurship

Individual entrepreneurship is central to the energy of Detroit’s neighborhoods. It is important for Detroit residents to be able to start businesses or make a living from home. Many of the buildings designed by the Taubman College students include spaces that could be converted from living or garage spaces to workspaces, workshops, and storefronts. Other buildings included small-scaled affordable retail on the ground floor.

Offering an easily understood and streamlined approval process is perhaps the most important thing cities can do to lower the barriers to the small developer. My students were inspired by Seaside’s simple, graphic zoning code to zone their site by type. Property owners could easily understand what is allowable to build.

A more recent example of zoning by type is the Midtown Pattern Zone in Bryan, Texas, created by Infill Group and Miller Boskus Lack Architects. The pattern zone stipulates a variety of pre-approved building types block-by-block within the zone. Additionally, the pattern zone includes licensed architectural designs and an expedited permitting system for four housing types. A small developer can get architecturally approved plans for a well-designed building immediately. The pattern zone makes it convenient to build incremental infill housing at scales appropriate to existing neighborhoods. The program reduces the administrative burden for the city and significantly cuts the design and entitlement costs for the small developer.

5) Take care of the parking

In planning the site in Detroit, a city where a quarter of households do not own a car, the Taubman College students assumed zero requirements for on-site parking. The provision of parking drives up the cost of development, and therefore the cost of housing. Additionally, private, on-site parking is inherently more inefficient than shared parking, and results in more parking overall.

Instead of parking on individual sites, the students assumed parking would be provided on street. Any additional parking was designed to be public and shared, in public lots and structures, and included spaces for shared cars like Zipcar. Such parking could be managed by a neighborhood organization, with the revenues used to support neighborhood improvements and activities.

Without required on-site parking, development becomes more feasible and affordable. Development, especially on small parcels, is more likely to pencil out, both financially and physically, without on-site parking requirements. Space that would have been given over to storing cars can be used to create more housing. Rents and home prices can be lower if they aren’t covering the cost of parking. Renters and homebuyers who don’t own cars aren’t forced to pay for parking they don’t need.

In developing their proposals, the Taubman College students were able to meet with the newly formed Live6 Alliance, a planning and development organization working to enhance economic opportunity in Northwest Detroit. Community economic development organizations such as Business Improvement Districts (BIDs) and Downtown Development Authorities (DDAs) recruit and develop local businesses. A neighborhood community organization can assist developers in attracting local entrepreneurs as tenants for the buildings they renovate or build. Once a tenant has built up their business, the community organization can help the tenant apply for an SBA 7A loan to buy the building from the developer. This frees up capital and credit for the developer to build or renovate another building in the neighborhood while the local entrepreneur is building net worth and creating local jobs.

Access to capital can be a major barrier to small development projects. Community organizations have an important role to play in encouraging and advising local lenders on the importance and possibilities of lending on small projects. The organizations can help cultivate local lenders and investors by identifying the least burdensome sources of debt and equity for small developers, from community banks and credit unions to crowd-sourcing and patient equity. The organization can also encourage investment in the neighborhood by “de-risking” investment for both community lenders and equity investors (including pools of investment capital from local professionals and businesspeople.) The training of developers and the pre-approved building plans mentioned above help to reduce risk for investors, as does spreading investment among many smaller projects.

Crowdfunding is one way to generate capital locally, by allowing neighbors to purchase equity in projects. An inspiring example is the crowd-sourced community investment model developed in Detroit by David Alade, Andrew Colom and Kim Dowdell of Century Partners (this model was featured in CNU’s Building Local Strength report). Century Partners works through a real estate investment trust in which residents can hold shares paid by cash or asset contribution. The developers set up an investment fund that allows neighbors to purchase equity in the homes Century Partners rents. Residents can also sell properties to Century Partners for 80 percent cash and 20 percent investment in the company, retaining a level of ownership. This investment model allows legacy residents to benefit from rising property values and build back equity. Additionally, Century Partners provides home buyers with mortgage counseling and facilitates financing commitments from local banks.

By purposefully directing programs that encourage incremental development toward African American communities, property owners and potential developers, cities can increase Black property ownership and help increase the access to wealth their white counterparts have long enjoyed. Such programs won’t completely erase the wealth gap or overcome the long history of racist policies that have led to economic inequality, but it’s a step in the right direction. 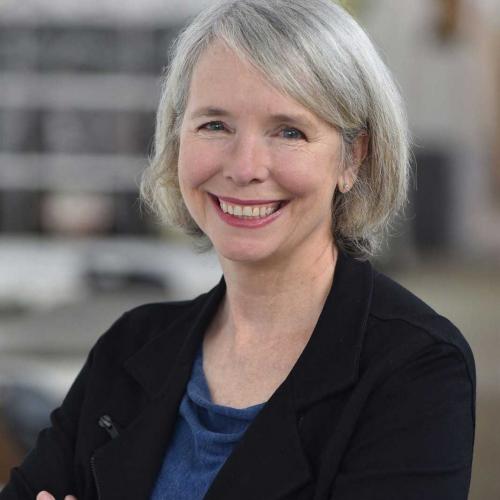