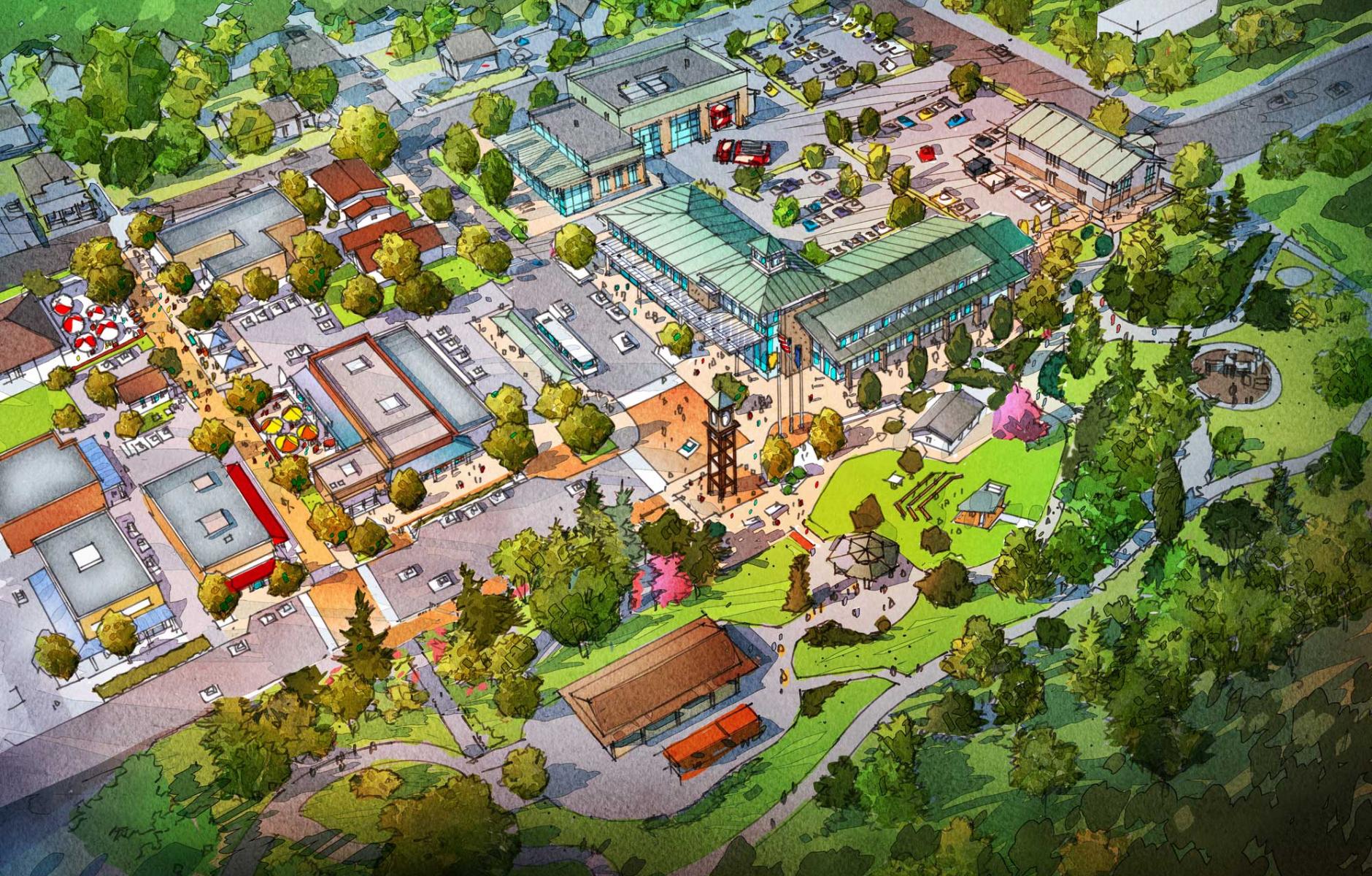 An unprecedented public process created a long-term recovery plan for the California municipality leveled by fire—and sets a model for responding to a changing world.
ROBERT STEUTEVILLE   &nbspNOV. 8, 2019

A year ago November 8, the Camp Fire swept through Paradise, California—and there may be no community that was destroyed as thoroughly in any modern US natural disaster. The working-class town of 26,800 people (2018 estimate) lost 85 percent of its buildings in a fire that claimed 86 lives. Although the fire raged for 17 days, most of the destruction occurred on the first day.

Paradise will receive major government recovery aid, yet there was no public funding available for planning—which is a necessary first step for getting public aid. Instead, the long-term recovery plan facilitated by the new urbanist firm Urban Design Associates (UDA) was paid for through the Butte Strong Fund—supported by the Sierra Nevada Brewing Co., the North Valley Community Foundation, and the Aaron Rodgers NorCal Fire Recovery Fund.

UDA of Pittsburgh, Pennsylvania, was selected because of their work with brewer Sierra Nevada—a developer of Meriam Park, a traditional neighborhood development in Chico, about 10 miles away.

The planning process was extraordinary. Nearly the entire town, including all of the council members, were made homeless. Residents are spread across 48 states. The process took 14 weeks and the town adopted the plan in June. In seven listening sessions and community meetings, residents had the opportunity to identify the strengths and weaknesses of Paradise, choose goals for recovery and prioritize individual projects.

Despite the scattered population, some of the meetings garnered 1,000 attendees. Other residents participated online or in virtual meetings. To ensure input from all attendees, UDA trained 60 volunteer facilitators, many of them Chico State University faculty. “The volunteer facilitator program very successful,” says Barry Long, principal at UDA. “One of the best outcomes of the entire process was just listening to residents.” The plan is a road map of 39 projects—prioritized as tiers 1 (highest), 2, and 3—some of which will be led by the town and others by private agencies.

UDA brought urbanist expertise to Paradise, including an emphasis on walkability, connectivity, and downtown planning. Yet much of the plan has less to do with urbanism than restoring basic needs. For example, the potable water system for the town must be restored at an estimated cost of $53 million, and schools must be rebuilt. The electrical system by Pacific Gas and Electric (PG&E) that caused the fire will be rebuilt and buried underground.

Most of the plan—90 percent—can be categorized as either mitigation or adaptation to the event, which is partly attributable to a changing climate. This kind of plan “might be the future with climate change,” says Long. “There’s sea level rise, inland flooding, hurricanes, and wildfires. The issue of adaptation is huge and we as urbanists have to get our arms around it. We have to evolve more quickly, so that these events don’t have as big an impact. The sad thing is that it is very difficult for communities to adapt ahead of a disaster.”

Among the basic adaptation strategies is to recognize that climate change is leading to more frequent wildfires in the west, he says, and new construction will meet a higher standard of protection. Most of the Paradise buildings and landscape did not meet the current codes for the wildland-urban interface (WUI). That means rated roofs, ignition-resistant siding, tempered windows, and better maintenance of trees and ground cover. Also, evacuation infrastructure will be improved.

Even before the fire, Paradise was a low-density suburban community in the WUI. The fairly extreme topography makes a grid of streets impossible—except in limited areas like downtown. Paradise has every kind of use typical in a municipality of that size, including substantial commercial development that serves a larger area—especially houses further up in the Sierra Nevada mountains.

Lack of walkability was identified by residents as a major weakness of Paradise, as was a dearth of “planning and vision.” Creating a “safer street network—sidewalks, street lights, and better connectivity” was the highest community vision priority. A walkable downtown was also high on that list.

“As urbanists, we helped them to embed significantly increased walkability—also mixed-use and diversity of building types—in the plan,” says Long. “There is a traditional neighborhood structure built [into the downtown]. It may not be what we would do in planning a new community, but from social standpoint there is remarkable cohesiveness.”

Paradise may also have been the largest city in the US without any sewerage, Long says. The plan includes a new sewer system in commercial areas of the town, which will allow for greater mixed-use, density, and walkable urbanism. It will also reduce environmental impact and incentivize growth.

Additional projects for the downtown include a new civic center that would house a cluster of fire-resistant government buildings. The plan also includes, as a Tier 3 project, a performance/events venue called the Norton Buffalo Hall and Gold Nugget Museum featuring a commercial kitchen, cultural center, and exhibit space.

The burying of utilities by PG&E creates an opportunity to build a network of pedestrian/bicycle paths on major thoroughfares—paths that will also improve emergency access and evacuation. The paths will be built above the utility channels.

About half of the thoroughfare system gets very little traffic. People walk on the edges of these informal roadways. Pedestrians only encounter barriers at the more heavily trafficked town roads, and that’s where the system of paths will begin. Without the path system, Paradise had “virtually no pedestrian network,” Long explains.

The plan also proposes the construction of six missing road segments to improve connectivity—especially for emergency access and evacuation. This is a high-priority project. The plan also requires two means of access on long dead-end streets to boost connections and fire access.

Forty percent of housing in the town was rental single-family units, and this was “naturally occurring affordable housing,” Long says. This provided workforce housing for Chico businesses such as the Sierra Nevada brewery, where 15 percent of employees were made homeless by the fire. This housing “can’t be rebuilt at the same price point, and that’s a huge challenge,” Long says. Homeowners are covered by a range of insurance for rebuilding. A Tier 2 project calls for replacement of Paradise Community Village, an affordable housing project, for an estimated $11 million (not including soft costs and infrastructure).

A single resource center for rebuilding, including permitting and housing issues, is a Tier 1 priority for the town. This “one-stop shop” is designed to optimize housing reconstruction.

The question may be asked: Why rebuild the town at all? A door-to-door survey in April 2019 found only 2,034 residents—less than a tenth of the pre-fire population. “They are rebuilding the town because 15 percent of it didn’t burn and significant commercial properties are still standing,” Long says. “Also, Paradise serves as a town center and commercial hub for residential areas located above it in the Sierra Nevada mountains.”

So far, building permits are approaching a thousand—while 9,000 buildings were destroyed, Long says. Nevertheless, the fire “created unbreakable bond from residents who are going to rebuild. Paradise will be vibrant community in future. And it will be wiser and more self-aware. Residents acknowledge the risks of the area they live in.”

The fire brought home the realities of a changing climate, Long says. “In Paradise, they are believers. They have to adapt and mitigate.”