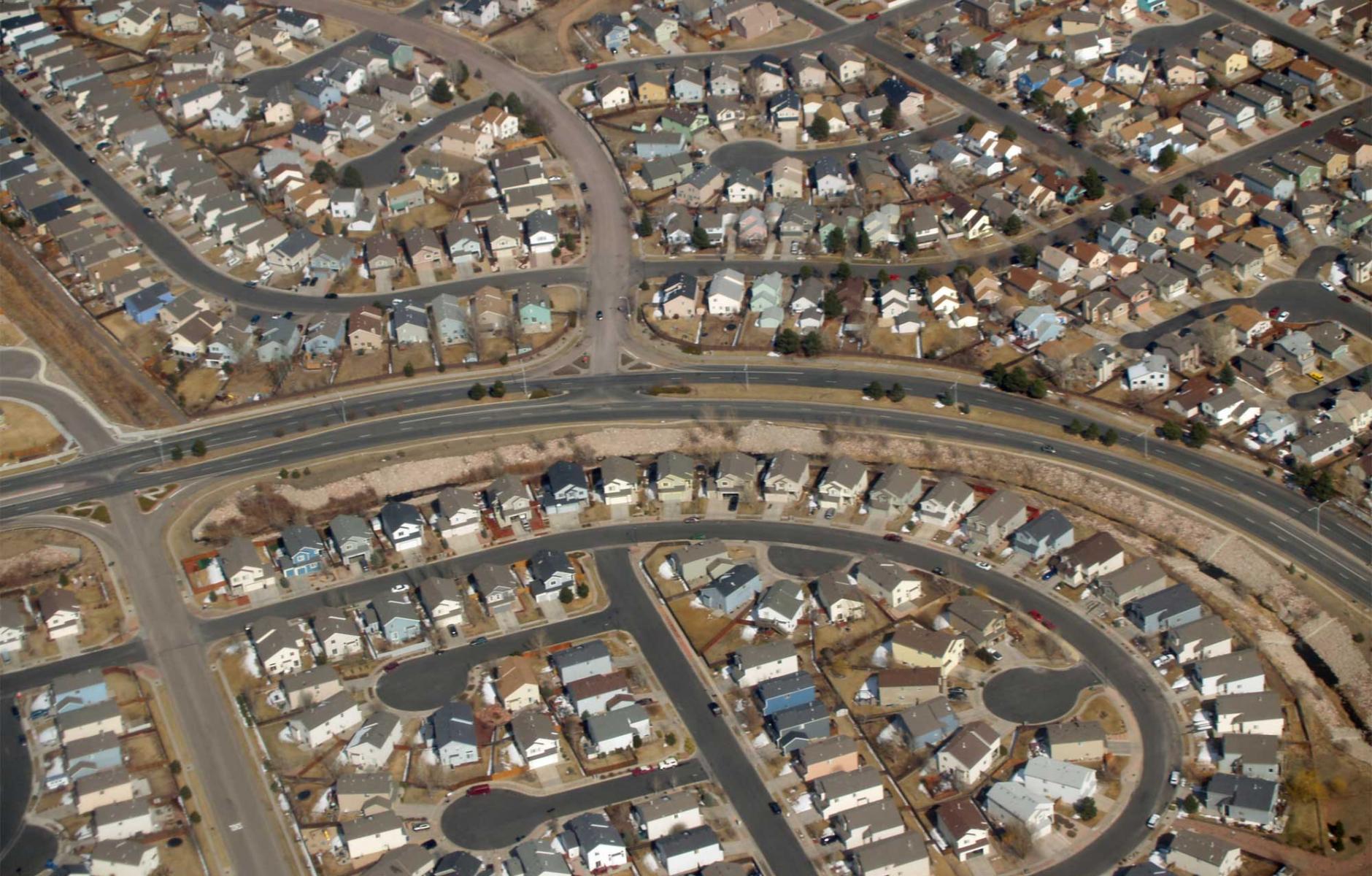 To fix suburbs, first define them

Suburbs may be defined in many ways, and a focus on walkability yields robust data aimed toward making better communities and sustainable regions.
ROBERT STEUTEVILLE   &nbspSEP. 25, 2019

What’s the best way to define suburbia? The answer depends on who is asking the question and what biases they bring to the table. A Harvard paper by Whitney Airgood-Obrycki and Shannon Rieger describes three methods currently in vogue in academia. Each of the methods yields different definitions. They all have their purposes, and some are more useful than others.

A suburb is best defined relative to a city or town. The name implies something that is less than urban—the “sub” prefix refers to “under, beneath, or below.” When people think about the suburbs, they often picture subdivisions, shopping centers, office parks, and other buildings spread across a landscape punctuated by lawns, garage doors, and parking lots—an environment where the automobile is necessary for most trips. That image makes sense, because more than 90 percent of US metro areas are composed of “drivable suburban” places, otherwise known as conventional suburban development (CSD).

Therefore, the definition of a suburb should recognize the radical changes in land-use patterns in the second half of the 20th Century that surrounded walkable cities and towns with sprawling, automobile-centric development. CSD poses problems for fiscal and environmental sustainability and equity. Since CSD is spread out, it requires a lot of infrastructure that must be maintained long into the future. The automobile dependence means higher per capita carbon emissions. CSD imposes high transportation costs on low-to-moderate-income families.

I will briefly discuss the methods described in the Harvard paper, their advantages and drawbacks, and then suggest ideas for defining suburbs that are useful in ongoing efforts to make suburbs more sustainable. The methods described by Harvard either ignore CSD, stereotype it, or fail to recognize its ongoing potential to transform.

CSD is like “the elephant in the living room.” That metaphor is often used to describe families with addiction. In some sense, we are addicted to our current living arrangements, because we are invested so deeply in them. Our economy, culture, and way of life are entwined with how we have built suburbs over the past 70 years. It may be easier, in defining suburbs, to ignore CSD—and doing so makes as much sense as ignoring addiction.

The first method, which the authors call “census convenient,” defines suburbs as anything outside of the principal city of a metropolitan area. As the name suggests, this method simplifies data gathering and analysis. That quality makes it popular among pundits looking to broadly characterize cities and suburbs without going into the details. This definition relies on political boundaries—one city stands for everything urban in a particular metro, while many jurisdictions and counties stand for everything suburban.

This method leaves a lot to be desired. Beyond the central city, suburbs are diverse. They include smaller historic cities and towns, and denser, more connected, “inner ring” suburbs. They also include the vast sprawling outer ring, in addition to places that are reforming and becoming more walkable and mixed-use. Central cities, also, vary significantly. Many have expanded over the years, incorporating broad suburban areas—while other cities retain historical boundaries. The “census convenient” method is too coarse-grained to clearly highlight the diversity in the built environment—and therefore is of limited use in devising strategies to make the suburbs more sustainable.

A second definition deals with markers of lifestyle, specifically single-family dwelling occupancy, homeownership, automobile commuting, and middle-class status. Dubbed “suburbanisms” by Airgood-Obrycki and Rieger, this method employs a stereotype of suburban living. Focusing on “suburbanisms” fails to acknowledge the diversity of lifestyles and neighborhoods, and how they change over time, in both suburbs and cities. Many historic cities include large areas of single-family houses and a high rate of homeownership. Both suburbs and cities are changing demographically—the former growing less wealthy and the latter less poor. CSD does generate a high rate of automobile commuting, but conflating these characteristics yields a muddy view that is too close to the tone of the dated 1960s protest song, “Little Boxes.”

Finally, the authors describe a method based on development eras, which they call the “typology” definition. Areas built prior to 1950, whether inside or outside the principal city, are defined as “urban.” Places built roughly between 1950 through 1969 are defined as “inner ring” suburbs. Developments from 1970 onward are called “outer suburbs.” These three eras strongly correlate with walkable, traditional neighborhoods (pre-1950), denser, more connected suburbs (1950-1969), and the most sprawling areas (1970-present).

While the typology method has merit, the definition is rooted in a static view of place—yet cities and suburbs are changing all of the time. There was a time, not long ago, when planners and developers were busy tearing down historic neighborhoods to build parking lots and wider roads, making them more like conventional suburbs. Now the reverse is happening in many suburbs.

Many thinkers and researchers are defining the suburbs in ways that directly address the unsustainable development patterns found across the suburban landscape. Not highlighted by Harvard, this work builds on new urbanist theory, which recognizes the importance of walkable neighborhoods and urban place types, using the rural-to-urban Transect, and connecting regions through transit-oriented development.

This approach identifies CSD and walkable neighborhoods throughout regions. By looking at fine-grained physical characteristics such as block size and proximity to transit, and using web-based walkability scores (which are flawed by still useful), researchers can determine what is needed to reform CSD in any given location—if reform is the desired outcome. Furthermore, walkable neighborhoods are comprised of many parts and come in a variety of types, which may be analyzed through the Transect and direct observation (using tools like synoptic surveys).

A great deal of research, analysis, writing, and observation, supports this approach to defining suburbs. A method developed by Christopher Leinberger of George Washington University, and LOCUS, a part of Smart Growth America, is one example. Leinberger calls CSD “drivable suburban” and calls traditional neighborhood development “walkable urban places (WalkUPs).” He and a team of researchers, including GWU data scientist Tracy Loh, have looked at all major metro areas and found robust economic and social impacts related to walkability. In a series of reports over the last decade, this team has determined that WalkUPs continue to grow across the US and demand for walkable urban places is rising. The researchers argue that developing more WalkUPs is a key strategy to making more sustainable regions and boosting social equity.

The Center for Neighborhood Technology’s Housing + Transportation Affordability Index (H+T Index) also employs new urbanist theory to analyze suburban and urban places in all US metro area. The H+T Index reveals that walkable places substantially reduce combined housing and transportation costs. Similarly, the index provides data on the reduction of household carbon emissions, based on walkability and other factors.

Urban3, based in Asheville, North Carolina, has developed an innovative method for analyzing metro regions and their suburbs, with a particular focus on fiscal sustainability. This “geoaccounting” method graphically demonstrates the fiscal strength of downtowns, urban neighborhoods, and walkable towns throughout regions.

Those are three examples of methods that help to define suburbs by highlighting the physical environment. The methods identified by Harvard are all useful in their own ways—and definitions that build on new urbanist theory, focusing on walkability and the impact of traditional neighborhoods and downtowns, are particularly robust and effective.