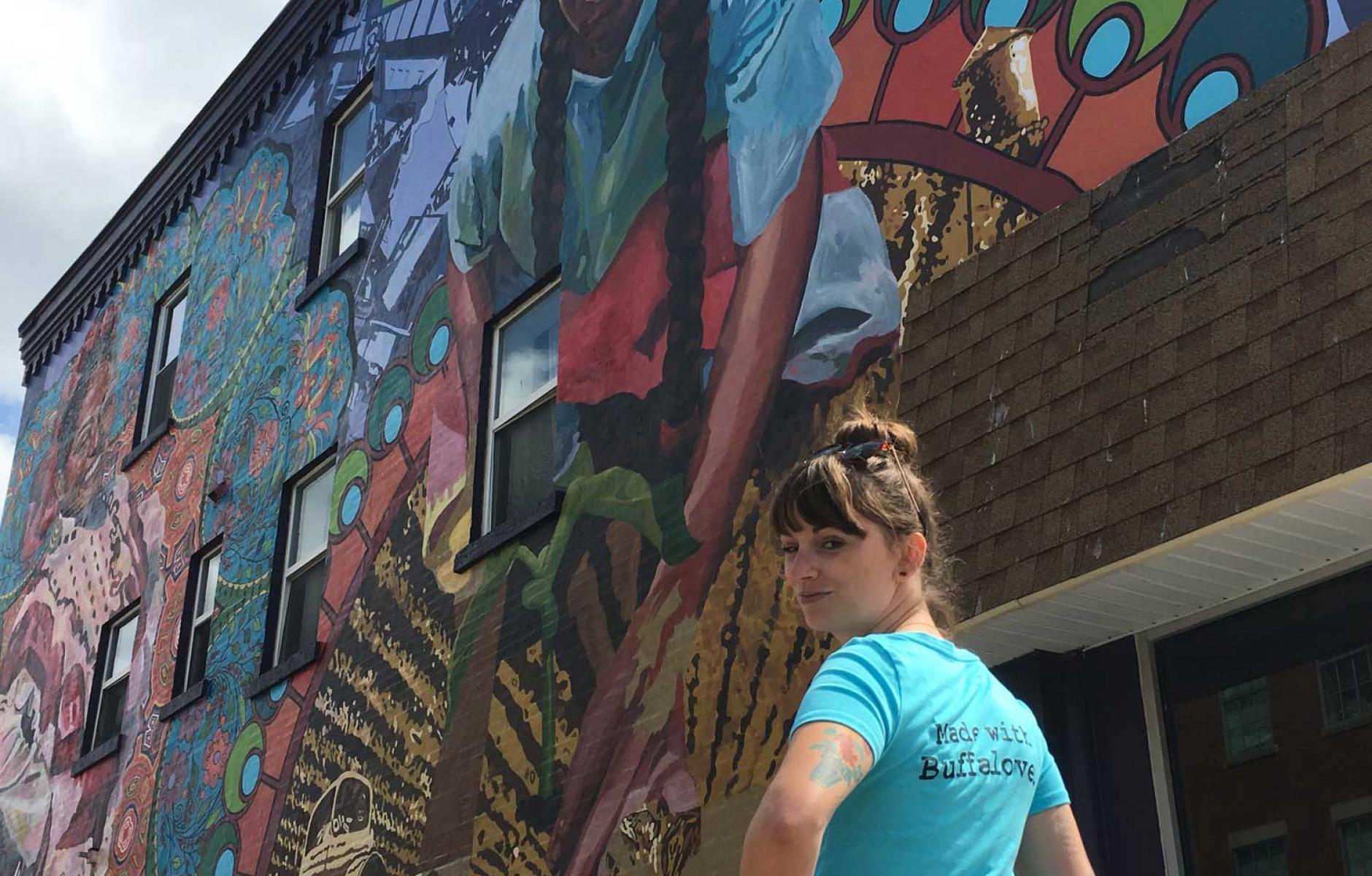 Bernice Radle at a mural on one of her development projects. Source Baffalovedevelopment.com
Development

Three women developers from across the US are helping to bring back their home cities.
JESSICA CREANE   &nbspJUL. 31, 2019

I am not a developer and I have never been a developer, however, the beauty of CNU is that it provides a well-rounded liberal arts education on urbanism—you can still take a class in a subject even if you’re not going to major in it.

At CNU 26 in Savannah,I dipped a toe into the development pond when I attended the Rapid-Fire Stools-by-the-Pool with Developers chat, and for the first time in my life thought kindly of developers, yet I couldn’t help but wonder, while I was listening to seven white men in a row talk about community engagement, where the female, non-binary, LGBTQ+, and developers of color were. So,when I saw the session Less Talk, More Rock: Getting Sh*t Actually Done—The Lady Developer Edition at CNU 27 in Louisville, I made it a priority to attend.

When I enter the room, t-10 minutes to the start of the session, it is already full of chatter. The panel—Bernice Radle, Allison Thurmond-Quinlan, and Jenifer Acosta—are joking around with each other, the holy name of Beyonce is invoked twice inside of a minute, and from the back of the room Allison’s three-month-old, immune to her father’s arm rock, is testing her lung capacity. Three-quarters of the seats in the room are already filled. The vibe is less like a conference than a holiday party. The speakers’ infectious energy has everyone at ease and it’s easy to see how these three rockstar women are wildly popular and effective developers in their hometowns. In fact, they make community engagement look effortless.

The session that follows pulls back the veil of that ease and illuminates the incredible effort behind the veneer. This is the brilliance of the panelists: they are fearless in showing the moving pieces of their lives. As the ladies share their hard-won wisdom and tales of battle from the trade, they continue to practice what they preach by sharing stories of what it takes to be a community-centric developer while activating and engaging with the community right there in the room. While each of the speakers is slated to speak in succession, it quickly becomes an open conversation between the three of them and, eventually, the audience.

Allison begins the session talking about goat ambassadors, which, for the un-anointed, are perfectly suited to human community building. Allison brought baby goats to the first property she purchased as a developer and set them the dual task of eating up all of the poisonous plants on the land (a particular expertise of goats) and being just weird and adorable enough to draw the public in for a conversation. Those who came by to pet the goats would end up learning about Allison’s development work in her hometown of Fayetteville, Arkansas, a city voted number 4 most livable in the United States by U.S. News. At the end of a month long ambassadorship, she created a pop-up petting zoo and invited the local school children to come pet the baby goats, thus securing her role as the local St. Francis of Assisi.

Allison, a founder of Flintlock Architecture & Landscape, also introduces the crowd to the acronym C.A.F. (Cute As F*ck). “We make everything C.A.F.” she says. “If it’s C.A.F. it will sell.” She shows us pictures of a few of her projects and they are, indeed, cute as f*ck.

Where Allison started her life as a developer slow and steady with one residential project, Jenifer, founder and CEO of Jenifer Acosta Development based in the great lakes region of Michigan, was less moderate. A self-described “one-woman operation,” her first project was a massive historical reconstruction. She shows us before- and after-photos that illuminate the journey from W.T.F. to C.A.F. Her eyes glaze over as she emphasizes the importance of “by-right” development that allows property owners to build on the land with a zoning permit rather than having to make an endless and expensive stream of appearances before various commissions with a team of lawyers, engineers, and architects to help plead your case. Jenifer emphasizes knowing what one is getting into when undertaking the redevelopment of historic buildings, making it clear that she has seen some things in her time.

Bernice, who is the lead facilitator of the panel, is the last to present. She is a true Boss in the best sense of the word. Not only does she run both Little Wheel and Buffalove Development in Buffalo, NY, she does so with the competence, enthusiasm, graciousness, and love for of her community that exemplifies inspirational leadership. In creating a company that is 50 percent female on the admin side and up to 100 percent female when it comes to crews of painters and construction teams, she enlisted the help of a village and gave back as much as she asked. Her work as a developer has her handling not just buildings and community development but HR and all of the other responsibilities of a small business owner with 20+ employees. She exudes infectious enthusiasm for everything from construction work to mural arts and it’s easy to see how her community work has led her to a place of organizational and community leadership.

Bernice, Allison, and Jenifer all subscribe to the Find Your Farm model of development; the idea that developers should be investing in one community—their own—and getting to know the needs of that community before deciding what to build there. It is a lifelong process and the speakers acknowledge that there are far more lucrative life paths and faster ways to turn a profit than small scale development. They also acknowledge that it is love of their communities that makes it all worthwhile.

After walking us through their origin stories and war stories, the women answer a series of rapid-fire questions, led by Bernice, about the challenges of developing on a small scale, work/life balance, and the pros and cons of being female in a male-dominated field. Allison pulls no punches about what it takes to make this lifestyle work. “This life is only possible because we have a nanny, a house cleaner, and someone who mows the lawn,” she says. Her husband has a job that provides healthcare benefits for the family. All three women are white and possess a myriad of privileges, as do most CNU attendees, making their acknowledgement of the hard work, ingenuity, determination, and privilege that has made this kind of community-centric development work.

After the talk, Jenifer tells me that there’s a local meet-up for female CEOs in her area that she and some of her tenants are a part of. There are no boundaries between her role as a landlord and her role as a community activist. She is activating her community by inviting other women into the conversation about the pros and cons of being a female CEO and she is risking vulnerability in talking about her own struggles with her tenants. When an attendee asks her what she wishes she’d gotten to talk about more during the session she pauses thoughtfully and says that she wishes they’d had time to talk about how essential it is that women lift each other up, not tear each other down. Even without direct acknowledgment of this topic during the session, the panelists’ actions conveyed this message loud and clear.

It is refreshing to be in a room that embodies the spirit of community engagement. As someone new to the fold of CNU, it is extremely helpful to hear from innovators in the field who are mid-process; who are still in the thick of the hard work and giving reports from the battlefield. As a female-identifying human, it is all the more powerful to hear from women working in the field. My hope is to attend more CNU sessions in the future that amplify the voices of women, non-binary, LGBTQ+, and people of color that have been shut out or privileged out of this work in the past; particularly those who occupy more than one of those spaces and run up against a Venn diagram of prejudices and obstacles. CNU’s mission is to “build places people love;” it is one I believe in, and I look forward to more sessions and plenaries in the future that amplify the voices of those who are most in need of lovable places. 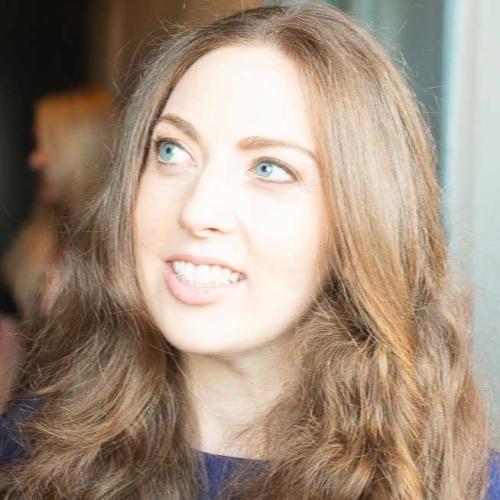