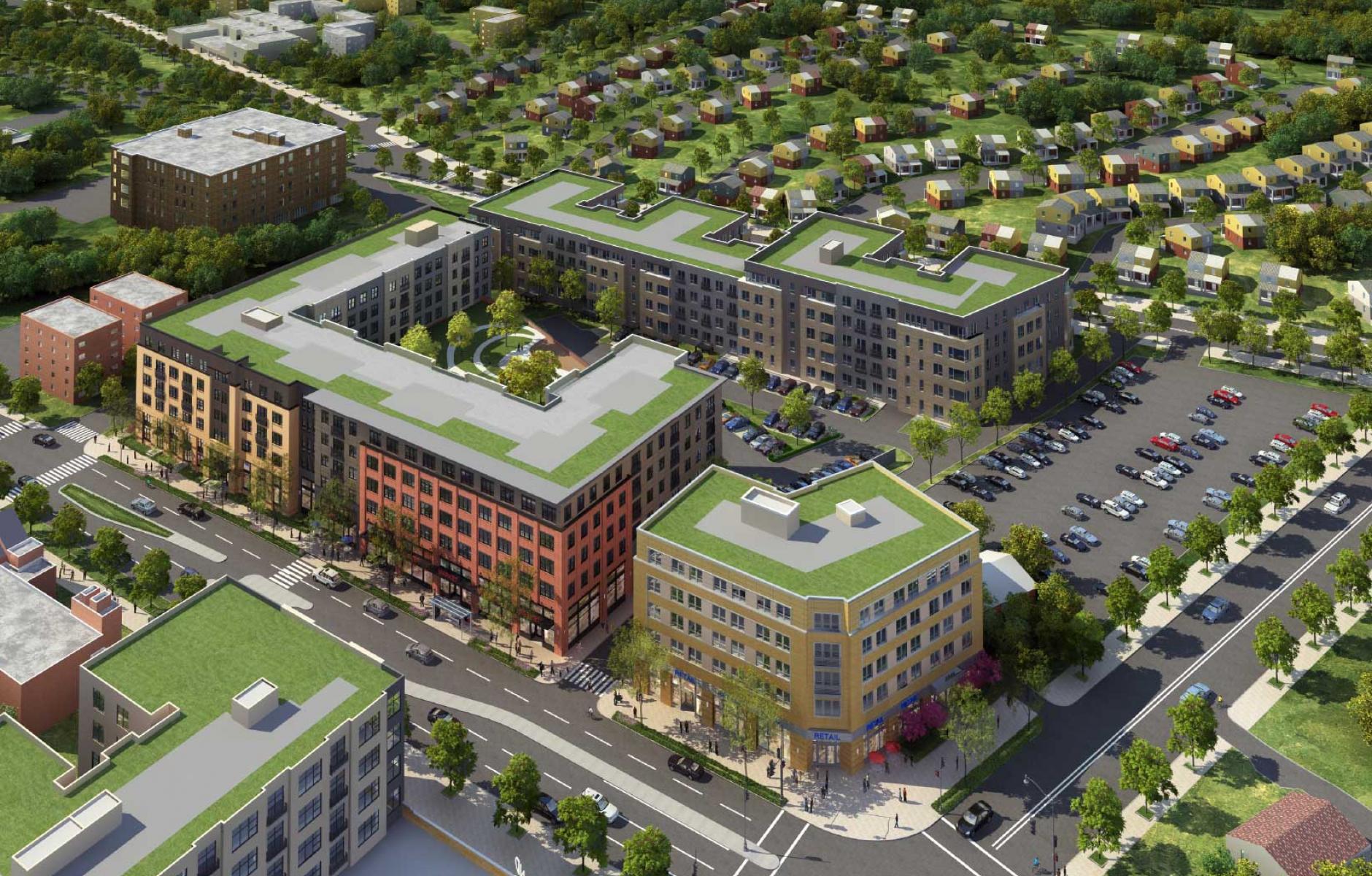 That’s the approach in Deanwood—a neighborhood east of the Anacostia River in Washington, DC. That area long suffered disinvestment and declining values—but now it is on the upswing and, like much of Anacostia, it is an Opportunity Zone.

There are 8,700 Opportunity Zones around the US, created by a 2017 change in federal tax law, and selected by states mostly in low-income parts of cities, suburbs, and rural lands. In DC, all Opportunity Zones are located on the east side of the city.

Four projects designed by Torti Gallas + Partners are underway or built in Deanwood, creating more than 500 low-income and affordable living spaces along with new retail, educational, and community uses. These projects and others are transforming the heart of the neighborhood.

The Deanwood neighborhood “is an example of how multiple projects can create the critical mass that spurs community change,” note Gallas, who is CEO, and Cheryl O’Neill, a partner. The neighborhood’s transformation began with significant city investments, including streetscape and pedestrian improvements that transformed a major arterial, Nannie Helen Burroughs Avenue, into a multi-modal urban boulevard. The neighborhood’s signature open space, Marvin Gaye Park, was also renovated.

Recent construction on or near the avenue, in the neighborhood town center, includes The Residence at Hayes, which provides 150 affordable apartments, including two, three, and four bedroom units designed for families. The scale of the building is broken down by three courtyards that face the street, including one that terminates the view at the end of 52nd Street. The courtyards and the four “fingers” of the building that front on Hayes Street serve to modulate the scale of the building, vary the pedestrian experience along the street, and maximize green space for both the building and the neighborhood. The site was a former trash transfer station—so the building displaces no one and is a big step up for the neighborhood. Many of the units include patios and balconies.

Fronting Nannie Helen Burroughs Avenue at Division Avenue NE, a key intersection, Deanwood Town Center includes new mixed-income residential units including one, two, and three-bedroom apartments. The largest apartments, for families, were designed as ground floor townhouses with independent access. The development will include 16,000 square feet of retail, including a grocer (the area was a “food desert”). A large courtyard above the parking will create new recreation space, a secure play area, and gathering space. Sixty-one of the new units will be “build first” public housing replacement units, as part of the city’s New Communities Initiative for nearby Lincoln Heights/Richardson Dwellings.

The Nannie Helen at 4800 is a mixed-use project with 100 percent affordable housing, and one-third of the units are replacement public housing units. The 88,900 square foot building contains 70 living spaces, an 800 square foot fitness center, 41 parking spaces, plus office, retail, and amenity space.

Located on the campus of the Progressive National Baptist Convention (PNBC), Providence Place is a new 93-unit building of mixed-income housing that will further the mission of the historic congregation, and provide new housing for the surrounding community, including Lincoln Heights replacement units.

Three of these developments are part of the “build first” program that provides replacement housing ahead of the redevelopment of aging public housing. This “Build First” strategy in Deanwood will add affordable housing, including replacement living spaces for 40 percent of the low-income families needed for the anticipated phased public housing redevelopment.

“The new mixed-income housing has been a boon to the neighborhood, as evidenced in Redfin’s recent designation of it as one of the ten hottest housing markets in the country,” note Gallas and O’Neill. “Incorporating low-income housing as a core of the development program, the City and their development partners preserved existing affordable units and allowed legacy residents to remain in the neighborhood and benefit from its resurgence.”