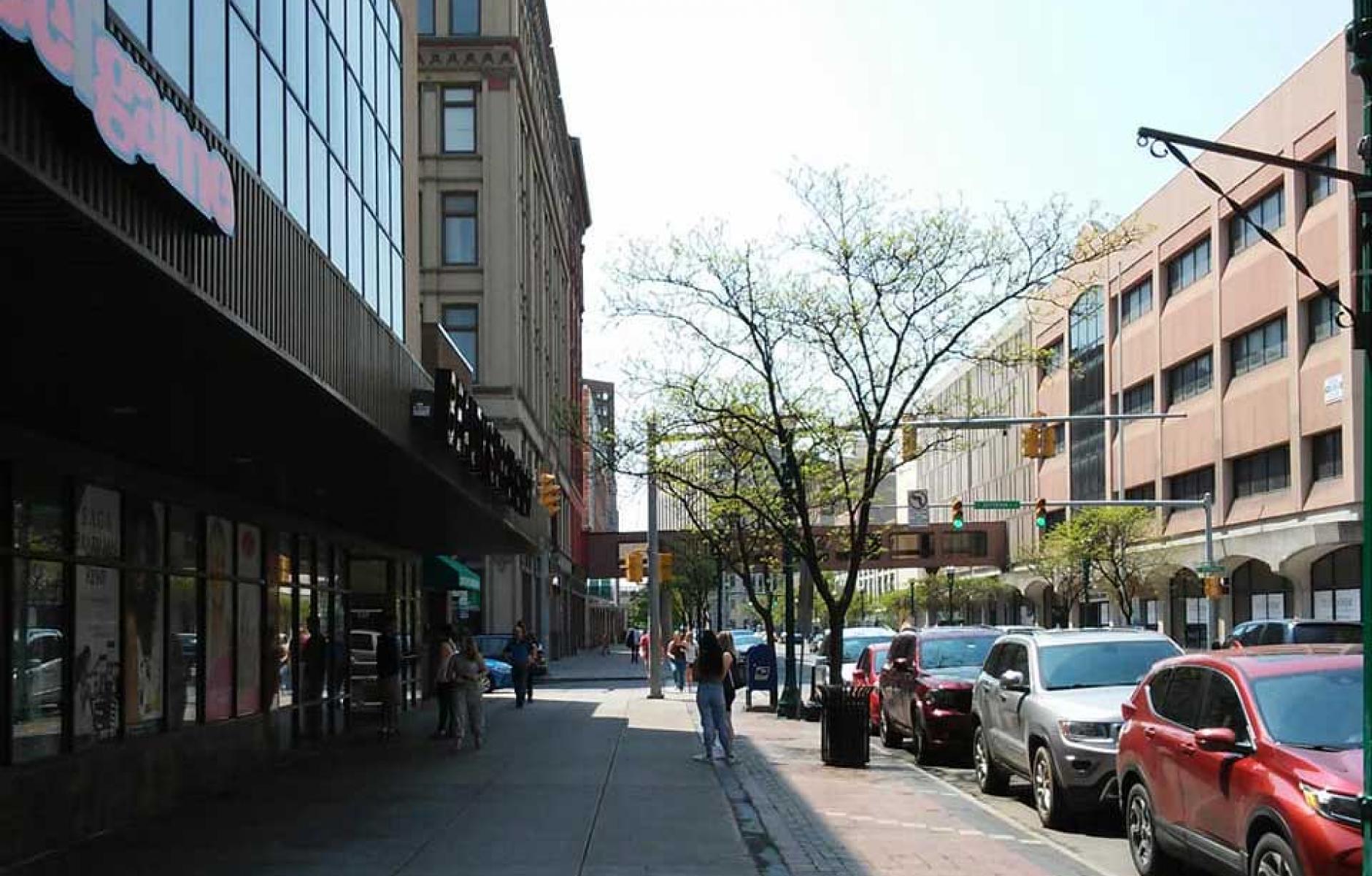 Syracuse street with an urban public frontage—a model for restoration of the city's grid of streets. Photo by Michael Lewyn.
Freeway transformation

Public comments are now being accepted to influence one of the most important Freeways Without Futures projects ever, and the design ideas and expertise of new urbanists are needed.

New York State Department of Transportation (NYSDOT) has endorsed the “Community Grid” option for transforming the elevated viaduct of Interstate 81 that penetrates through the heart of Syracuse, New York—but initial visions work against the intent of a grid of community streets.

Restoring the grid would enable the city to acquire land for public spaces, development that serves the public interest, and civic buildings. NYSDOT currently envisions an unnecessarily wide thoroughfare that would use up most of the right-of-way for non-tax-paying uses—limiting public land acquisition. About 90 miles away, the Inner Loop project in Rochester—another important freeway transformation—is experiencing similar problems. Syracuse could learn from Rochester’s experience and plan the Community Grid to boost mixed-use development and add value to the city.

A restored grid of streets—especially one that is close to downtown—calls for public frontages that are urban and walkable. Current plans show a parkway lined with grassy tree lawns. Such a thoroughfare would move traffic at a relatively high speed and pose a barrier to building a more walkable, human-scaled city.

In 1957, I-81 leveled African-American and ethnic neighborhoods, cut off downtown from the east side and its major employers, disrupted the historic network of streets, and contributed to the city’s decline. The DOT endorsed the Community Grid came in a draft environmental impact statement (DEIS) in April. The plan to transform the highway has strong political support in the city. The project has been listed in every CNU Freeways Without Futures report, including the recent 2019 report.

The Community Grid would cost about $2 billion, according to DOT. An alternative plan—building a tunnel—would cost $5 billion and was called “unreasonable” by the state. A solution is needed, because the viaduct is more than 60 years old. The Community Grid would shift the Interstate to the current I-481, a route that would move the through traffic around the heart of the city.

The DEIS is not finalized (that’s why it is called a draft), and therefore the fate of the highway is not yet sealed. Even assuming the viaduct is replaced with surface streets, the design will be critical to the project’s success or failure.

CNU members, including local representatives from Syracuse, held a 3-hour workshop at CNU 27 to explore design issues and ideas related to I-81 in Syracuse. The following are major issues identified at that event.

The highway corridor passes through various neighborhoods, and this should influence the design. Like any urban street, the context and public frontages of Almond Street—which would replace the highway, should vary and respond to the context of each segment. The workshop identified three distinct neighborhoods along the route.

Much of the highway divides downtown from the adjacent medical/university district and other intensive uses to the east. While the context zones may vary, this section would likely see the most mixed-use development.

Another section goes through Pioneer Homes, one of the oldest public housing projects in the nation, built from 1938 to 1940. Pioneer Homes includes 607 living spaces, including townhouses and three-story walkups. Some of these units sit very close to the highway. This section of the thoroughfare calls out for special design sensitivity, yet the transformation could offer the opportunity for additional housing and other uses.

A third neighborhood development opportunity arises because the project also includes the reconstruction of a section of Interstate 690, an east-west freeway to the north of downtown, opening up several blocks for redevelopment near the Erie Canal Museum.

For maximum benefit to the citizens, the city, and the city’s future, new thoroughfares created through the community grid must be as comfortable and appealing as possible to pedestrians and bicyclists. This is a critical design issue that will have a major impact on the success of the project. Pedestrian-friendly streets would reknit the city socially and economically. The Community Grid should resemble, in important ways, the historic grid of the city (see photo at top), although the style of the architecture may vary.

DOT calls for two travel lanes in each direction on Almond Street, in addition to a center turn lane. Assuming that five lanes are needed, the question becomes how to make that street as pedestrian-friendly as possible. A design that keep speeds low and pedestrian crossings short would help to achieve that goal.

Lane width is a detail that has profound effects on speed of traffic, public safety, and pedestrian comfort. The current plan assumes 12-foot lanes, the same width as the current Interstate highway. Yet the National Association of City Transportation Officials (NACTO) recommends a maximum of 10-foot lanes on city streets—the only exception being a major bus or freight route, where NACTO recommends only one 11-foot lane in each direction. The recommendation in NACTO’s Urban Street Design Guide is based on solid research showing that narrower lanes are safer for everybody, because they slow traffic speeds. Speeds of 20-30 mph have high capacity, because the distance between cars is small. The Institute of Transportation Engineers (ITE) takes a similar approach to NACTO regarding lane width in its Implementing Context Sensitive Design on Multimodal Corridors: A Practitioner's Handbook.

The replacement of the current 12-foot lanes with 10-foot lanes (and perhaps one 11-foot lane) would increase safety and reduce crossing distances for Almond Street. That approach follows best practices of the major street design and engineering organizations today. Incidentally, it would also reduce paving costs.

The design for Almond Street includes 14-foot-wide “buffers,” essentially tree lawns, on both sides of the edge of the thoroughfare. These buffers have little place on an urban street, especially where the street traverses the most intense development areas between downtown and the university/medical districts. The purpose of these buffers is to separate high-speed traffic from other uses and modes of traffic, but the street should not be designed for high-speed traffic in the first place. The buffers will only serve to widen the street, promote higher traffic speeds, make pedestrian crossing more difficult, and inhibit mixed-use development (Urban storefronts do not thrive with tree lawns and buffers—they like wide sidewalks interspersed with tree planters). Eliminating the buffers would provide the city with substantial land for mixed-use development and make a better streetscape.

The current plan calls for a wide, landscaped median in the middle, of 18-30 feet, in addition to a 12-foot turn lane. A more urban street could combine these two and use short turn lanes at intersections with a median mid-block. This combined median/turn lane could be made considerably narrower—the width of the turn lane. Details such as a different pavement treatment of the turn lane would reinforce the slow speeds and pedestrian safety of the center of the street.

The grid as a mixed-use setting

Both the buffers and the medians raise the question of whether NYSDOT and its contractual engineers are fully considering the grid as an important setting for mixed-use buildings and public spaces, as opposed to merely a corridor for automobiles. Gridded urban streets serve many purposes, and a critical one is providing sites for buildings with commercial, residential, and civic purposes. The public frontages either support or hinder mixed-use development. You can’t have a walkable city or a Community Grid without mixed-use buildings and neighborhoods.

A successful street in a grid is no wider than it needs to be. A grid disperses traffic rather than concentrates it, allowing individual streets to be smaller and more human-scaled. This raises the question of whether five lanes are even needed. At the CNU workshop, some suggested that the actual traffic levels on Almond Street could be adequately served by three or four lanes, which would make the street better for pedestrians and provide the city with more land to aggregate for development with a public purpose—such as affordable housing or public spaces. Rethink 81, the leading organization that has promoted the grid proposal, is looking into ways to study future volumes of traffic that take into account a reduction in demand due to walkability and traffic dispersion. The track record of highway transformation shows that much of the traffic will simply disappear.

The DEIS has a substantial section on “loss of parking” that would result from the Community Grid. There is little but surface parking in and around the viaduct because the highway destroyed property value (Land values near the highway are worth only 12 percent of those immediately to the west and east). Reduction in surface parking, replaced by more productive uses such as mixed-use buildings, would be good for Syracuse, not a “loss.”

The DEIS also assumes that all existing parking under the viaduct would be lost. This is not true, because a restoration of the grid could contribute substantial on-street parking. Unlike off-street parking, on-street parking contributes to walkability by protecting pedestrians from moving vehicles, and slowing down those vehicles. Rather than recognizing the potential for on-street parking, DOT recommends “development of new parking supply in the form of surface lots or parking garages.”

The CNU workshop was too brief to get into design details, such as whether roundabouts would be appropriate. Roundabouts are used in many cities to slow traffic and reduce pedestrian crossing distances—while at the same time improving traffic flow. Whether roundabouts are used or not, the designs for intersections will be key. Crossing distances should be as short as possible on Almond Street, and curb extensions and appropriate curb return radii will help to achieve that goal. In general, narrow overall street sections will contribute to smaller and more pedestrian-friendly intersections. In a Community Grid, streets should be as connected as possible.

CNU experts, and others, can comment on the plans for Route 81 in Syracuse by following this link. Public comments will be accepted for a period of time—likely several months—but the exact deadline for comments is not known as of this date. This time frame will be determined by the schedule of a future hearing, and a period of 45 days after that hearing. Readers can view the full DEIS by following this link. The full DEIS is some 15,000 pages, but some of the key design sections include Appendix A-1-4 (Highway plans, profiles, and typical section for the Community Grid), Chapter 6-4-3 (Visual resources and aesthetic considerations), and Chapter 5 (Transportation and engineering considerations).

The transformation of Route 81 in Syracuse is far from settled. The local proponents for transforming I-81 in Syracuse have won an important battle, but the next few months will be critical to achieving the underlying goal of Freeways Without Futures—building a better city.