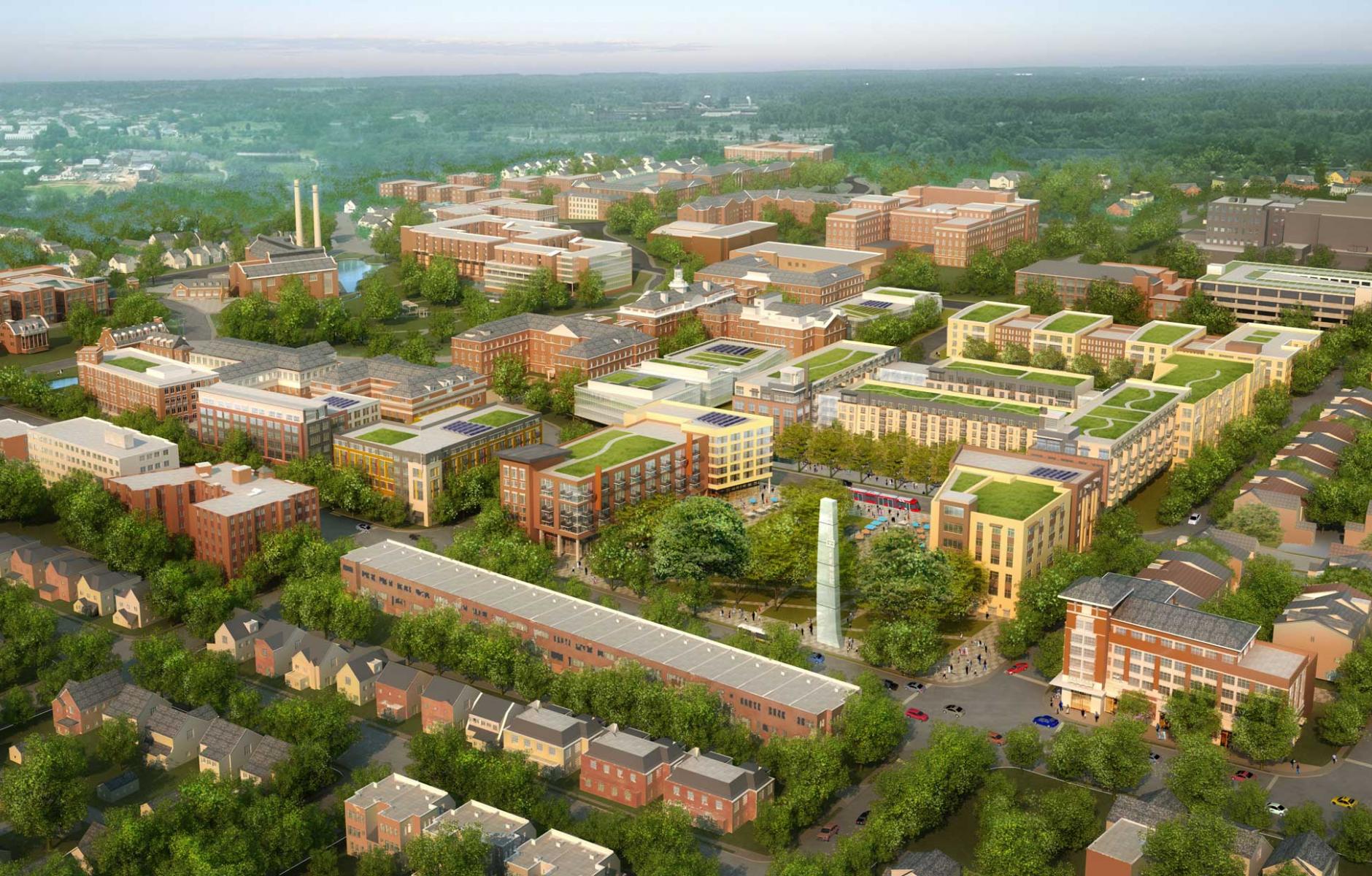 Urbanism and preservation of a historic landscape and medical buildings add up to a unique redevelopment underway in Washington DC.
ROBERT STEUTEVILLE   &nbspJUN. 4, 2019

The Parks—Historic Walter Reed is the adaptive reuse and redevelopment of a historically significant medical campus: the primary US Army medical center of the 20th Century, in Washington DC. The campus was originally built with Georgian-style brick buildings on a north-south axis, serving veterans of the World Wars and victims of the Spanish flu. Many of the early buildings were demolished and the axis was spoiled with the 1970s construction of a monolithic brutalist hospital—out of scale with even the large historic buildings.

After the 67-acre site was decommissioned in 2011, the city acquired the property, developed a Base Reuse Plan, Small Area plan, and the Walter Reed Zone, followed by the selection of a Master Developer team to reuse the site and connect it to surrounding neighborhoods. The redevelopment has begun with the demolition of the huge hospital, which restores the north-south axis and allows a street grid to be established on the northern part of the site.

The approximately three million-square-foot development is designed with a full spectrum of uses to provide for daily needs and even special occasions, with expected completion in 2024. The project includes employment, job training, medical care, medical research, a hotel/conference center, a charter school, arts programming, historic interpretation, social services, and a museum. Nearly 2,000 planned residences include townhouses, condominiums, apartments, and housing for low-and moderate-income veterans, senior citizens, and other households.

More than 260,000 square feet of retail, including a grocery store, will be built around a town center that includes a village green, splash fountain, ice rink, band shell, and transit stop. The southern part of the site will be maintained as a campus, with two great lawns, an extensive arts park and plaza anchored by a brewery/distillery, outdoor performance opportunities, and community pool. The entire site will preserve large trees and walking paths connecting residents to adjacent Rock Creek Park and an interstate network of bike trails.

New street connections open the once-gated campus to surrounding neighborhoods. The plan is integrated with the Washington Area Metro transit system, and bicycle and active transportation networks provide a range of mobility options.

The development preserves and enhances vistas to many of the key buildings, incorporates extensive sustainability features designed to make this project a net-zero energy user by 2030, and creates historically sensitive guidelines for historic/new landscapes and historic/new buildings. The Parks— Historic Walter Reed will transform the northern sector of DC through architecture, urban design, and a construction program that honors the historic significance of the site.

The Parks—Historic Walter Reed won a 2019 Charter Award from the Congress for the New Urbanism (CNU) for Torti Gallas Urban. The developers on the project are Hines, Urban Atlantic, and Triden Development Group. The historian is EHT Traceries, Inc.; the landscape historian is Heritage Landscapes, LLC; and the landscape architect is OEHME van SWEDEN Inc. The winners will be formally recognized on June 14 at CNU 27 in Louisville.