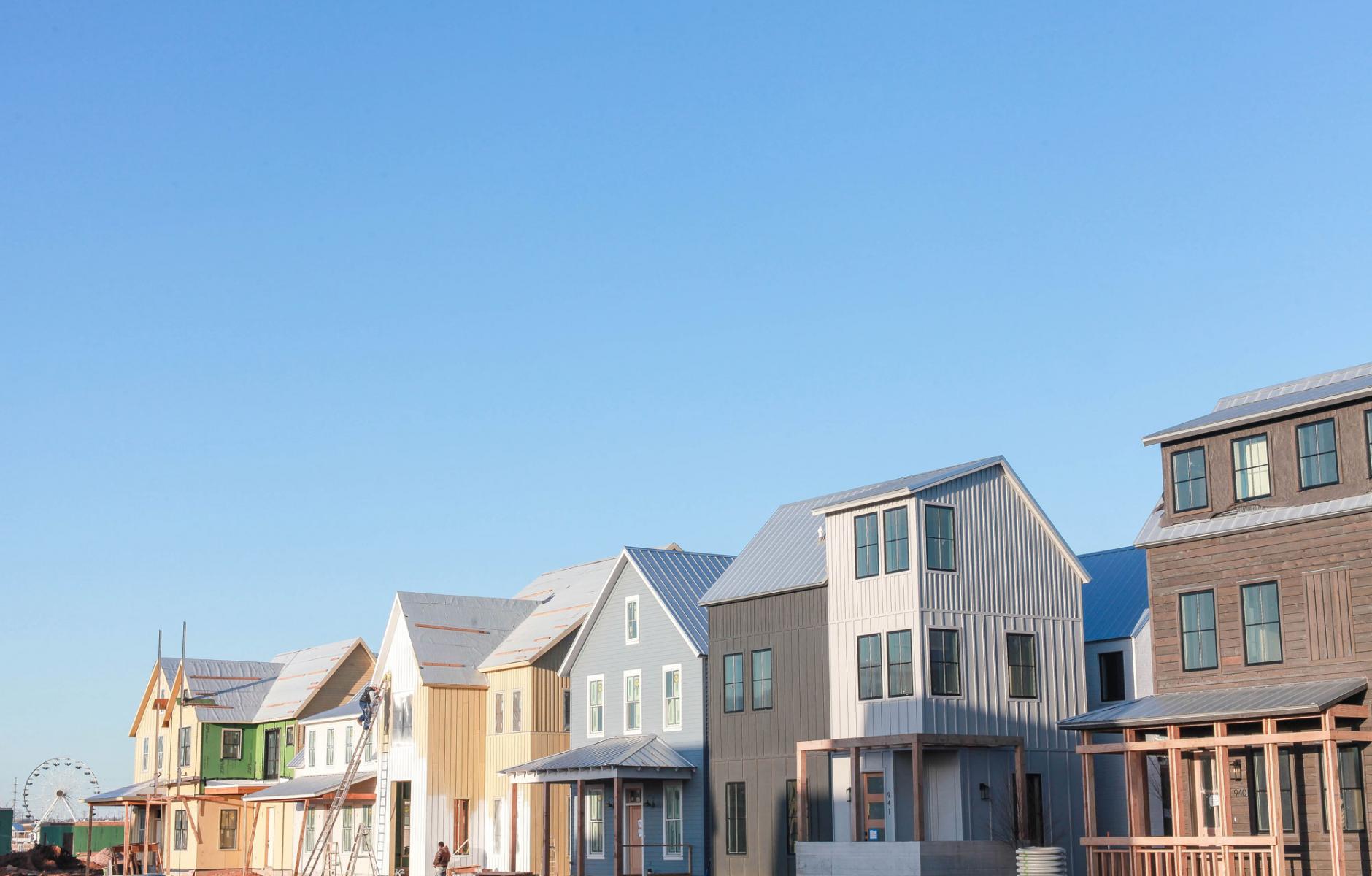 A large new urban project on a former airport near downtown Oklahoma City, the Wheeler District is off to a strong start.
ROBERT STEUTEVILLE   &nbspMAY. 1, 2019

A charrette more than four years ago envisioned a new neighborhood on a 135-acre vacant tract on the Oklahoma River, surrounded to the south by existing neighborhoods. One mile from downtown on a former airport, the neighborhood was christened the Wheeler District, after a historical figure in the city, and the centerpiece of the plan was a waterfront park with a Ferris wheel—a highly visible amenity that ties into the name.

Today the Ferris wheel proudly fronts the river, and new residents are moving in. “We only started construction seven or eight months ago, and we are already 65 percent sold out in phase one,” said Josh Kitchen, vice president of Wheeler Home, in February. “We are meeting the need of Oklahoma City residents who want to be near downtown but don’t want the headache of plumbing that’s 85 years old.”

The ability to purchase a newly constructed house in a location so close to downtown is highly unusual, agreed Jonathan Teal, a homeowner, in a recent news video.

Despite the under-construction appearance of the homes and public spaces, the signs of a strong new urban project are emerging. The houses look good and the streets and public spaces look appropriately scaled—and that’s not easy to do. That implies deviation from new construction norms in many respects.

The plan was created by Dover, Kohl & Partners for Blair Humphreys, one of a pair of brothers who are implementing New Urbanism in Oklahoma. Grant Humphreys is building Carlton Landing in Pittsburg County, using Light Imprint civil engineering techniques for the streets and public spaces. Future CNU attendees will be able to see the city and its new and old urbanism at CNU 29, which is scheduled to take place in Oklahoma City in 2021, with specific dates to be determined.

The Wheeler District charrette participants, about 500 of them, supported a new neighborhood with public plazas and squares along the river connected to existing neighborhoods. The plan calls for traffic on a busy road providing access to the site is calmed with a roundabout.

Former runways are transformed to tree-lined avenues. Overall densities range from 15 to 22 units per acre. Wheeler is an “aggressive expansion” of the redevelopment that is already taking place downtown, but it is also filling in a large gap on the south side of the river, Kitchen says. Soon the developers will start construction of apartments, condos, and a school, followed by mixed-use, according to the news report.

Since the 2008 housing crash, New Urbanism has focused on smaller-scale projects, filling in gaps in existing neighborhoods and downtowns, and creating mixed-use centers in the suburbs.

The Wheeler District is the rare full new neighborhood in a city. The project broke ground on infrastructure in 2017. It’s good to see the wheels turning and shifting to a higher gear so soon after the start.