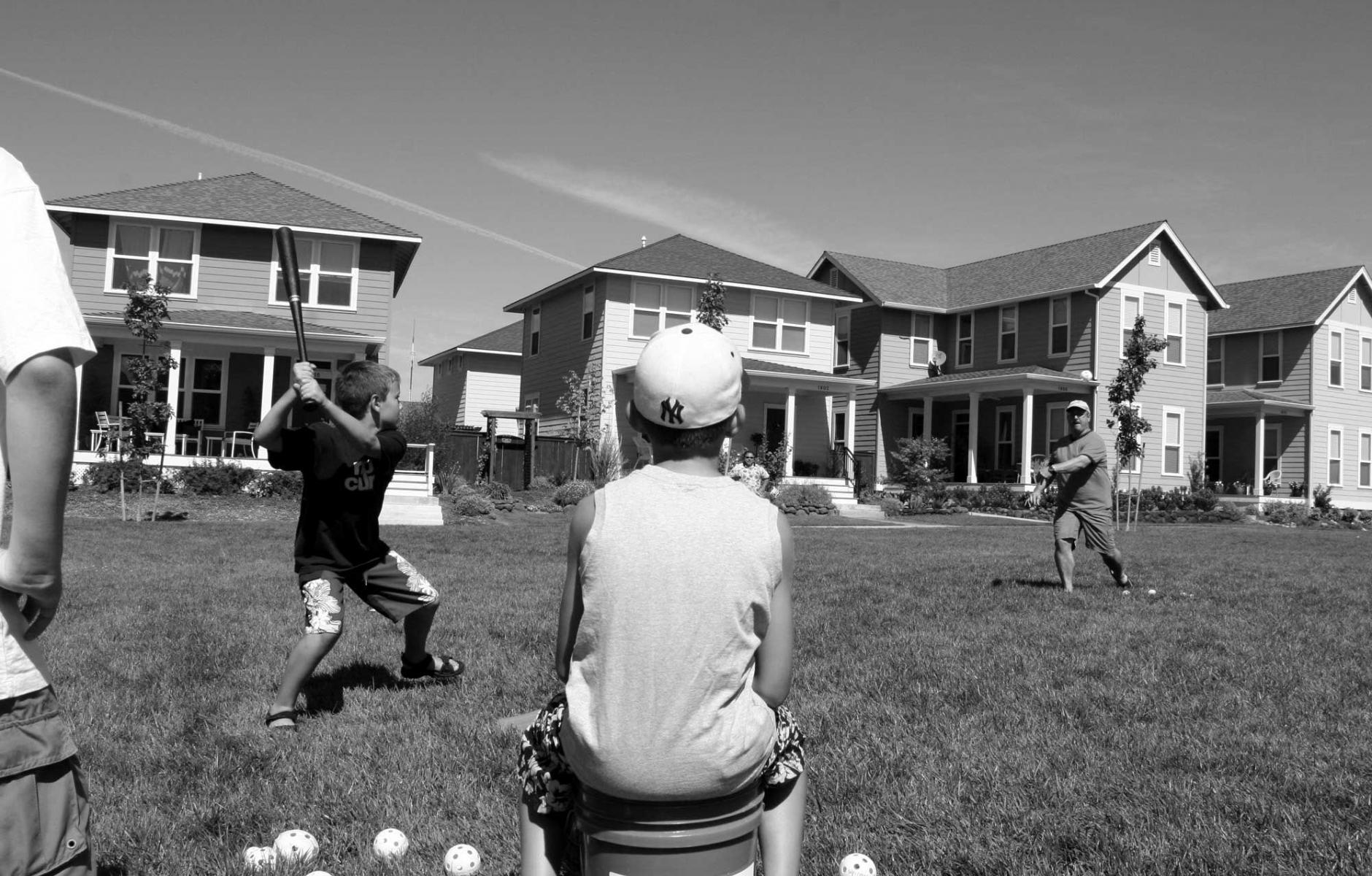 A park in Doe Mill, California, designed for children to play outdoors
Community

Our built environment separates everything to reduce conflict and make us safe—it may instead do the opposite.
ROBERT STEUTEVILLE   &nbspOCT. 23, 2018

I am reading The Coddling of the American Mind by Greg Lukianoff and Jonathan Haidt, which speaks, in part, of the culture of “safetyism” that has taken hold in American discourse and higher education. The authors draw from ancient wisdom, psychological theory, and science to make the case that it is bad for human beings to be made too safe. Research has recently shown that diligently keeping young children away from peanut products—the norm since the 1990s in the US—has vastly raised the prevalence of peanut allergies. Similarly, it is psychologically harmful to protect students from ideas that challenge their worldview and that they may find offensive, the authors say. To put it succinctly: What doesn’t kill us makes us stronger.

The book draws on theories of author and polymath Nassim Nicholas Taleb, who says that people are “anti-fragile”—which means that they thrive on a certain amount of conflict and challenge. People get stronger, for example, by going to the gym. Sitting on the couch too much will make you weaker and ultimately kill you.

Haidt and Lukianoff discuss many ways that safetyism has impacted our culture, including not letting children out to play without supervision, attitudes towards eating and health—but they don’t mention how we build communities. For me, it is not hard to see a parallel in community design.

Since the second half of the 20th Century, we have designed towns and cities for safety in ways that often makes us less safe. Based on the idea that lives were saved and health was improved by separating out heavy industry (prior to environmental regulations), zoning laws isolated more and more uses throughout the 20th Century. We separate apartments from single homes, duplexes from triplexes, small stores from residential, and big stores from office buildings, etcetera. Schools are placed away from where people live, as are churches and town halls. The theory is that separation reduces the potential for conflict. That may or may not be true, but it also reduces the day-to-day practice of working things out among individuals and groups. The more we separate, the more people seem afraid. I have been to a room packed with single-family dwellers who were terrified of the prospect of duplexes being built across the road, some distance from their homes. NIMBYism, which is making community building difficult all over, feeds on the idea that separation is normal.

A similar approach was adopted for street and road building—and thoroughfares form the structure of communities. Sometime in the last century we switched from the age-old practice of streets that intersect to those that channel traffic to control and reduce conflict. To get from one use to another you generally have to drive from local streets onto an arterial thoroughfare. Drive is the key word, because walking and bicycling are dangerous on fast-moving arterials.

At the same time, we built roads wider using the theory of “forgiving design,” which means that if a driver loses control they can correct that mistake without crashing into a tree or a lamppost. The problem is that “forgiving design” just makes people drive faster—and speed is deadly. This obsession with separation—of uses, building types, transportation modes, thoroughfares—is based on the idea that communities and humans are essentially fragile and are best treated like porcelain teacups.

On the contrary, studies by University of Connecticut and University of Colorado researchers have looked at cities laid out before and after this new community design philosophy took hold—essentially pre-1950 communities compared to post-1950 communities. It turns out that separation of uses and channeling traffic does not make us safer. Three times as many people die from traffic accidents in post-1950 cities. This method of community design also impacts health. The post-1950 communities experience higher obesity, heart disease, and other ailments—probably because people walk less and get less exercise as part of their daily routines.

Community design geared toward safetyism may have other impacts as well. Since about the 1980s, parents have been reluctant to send their children out to play. Walking and biking to school has plummeted, and is now down at around 13 percent. Children at appropriate ages need to push their boundaries—such as going to the store, library, park, school, or the house of a friend without help from the parent. But if the community is not designed to be walkable, how can children do this?

As Haidt and Lukianoff report, safetyism has many causes, yet communities are the physical places where we navigate our daily lives. Community design affects our habits and resilience. Safety is important—for everybody. Yet if humans are anti-fragile, then safety isn’t everything. If taken too far, it becomes harmful to both people and communities.