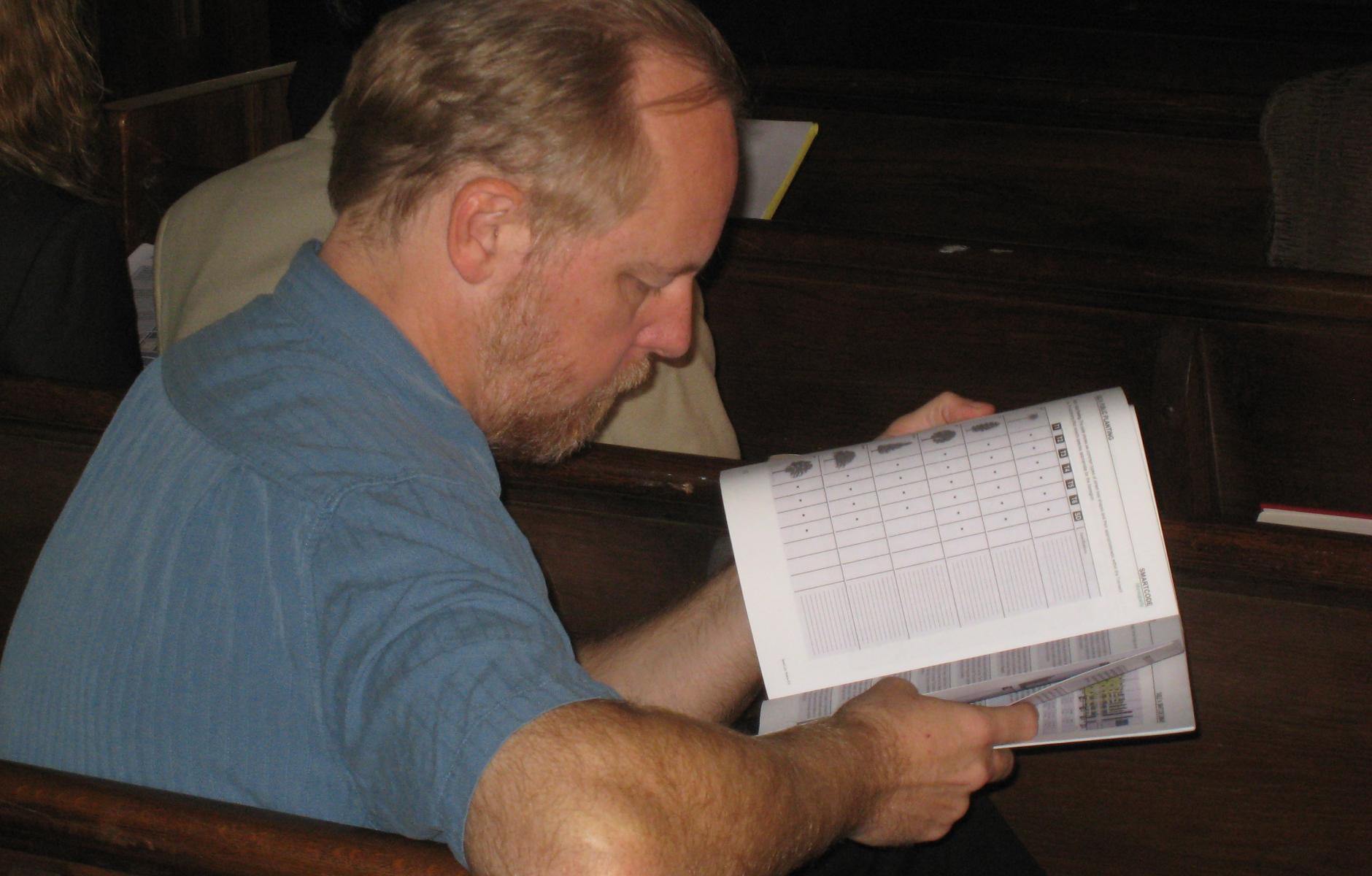 A lucky boy who will be missed

Bill Dennis was one of the first people I met in New Urbanism, when I stopped in at the charrette for Lakelands and Kentlands' Market Square in Gaithersburg, Maryland, in March of 1996.

Andres Duany introduced me to Bill, an architect and urban designer, because he was a cool guy and a key practitioner at that event and hundreds of other charrettes for new towns, neighborhoods, town centers, transit-oriented developments, and infill projects, nationally and internationally, over the course of his career. He had a hand in many new urban projects that have since become well known and won awards.

He said that charrettes are great fun, "but it takes weeks to recover." I laughed, then he added, "If you think I'm kidding, I'm not." But his tone had a hint of kidding, which may have been aimed at Andres, his employer for the event, who was standing there.

In a Congress for the New Urbanism debate on street grids, Bill took the side opposed to grids. He was fully supportive of well-connected street networks, but he favored more organic patterns with irregular blocks. He asked the audience: "How many people here are rectangular? Raise your hands." Everybody laughed, even as we sat in a rectangular room, with rectangular doors and windows.

Since Bill's passing on August 9, some said that he had the best sense of humor in the New Urbanism. In the crucible of designing communities on deadline, he inspired confidence while lifting morale. In the photo at top, he is reading the Smart Code, a form-based code, shortly after it was published. That's ironic, because he often said at charrettes: "I don't need no effing code," according to a friend. And he didn't. If everybody were as good a designer as Bill Dennis, land-use codes would be unnecessary. 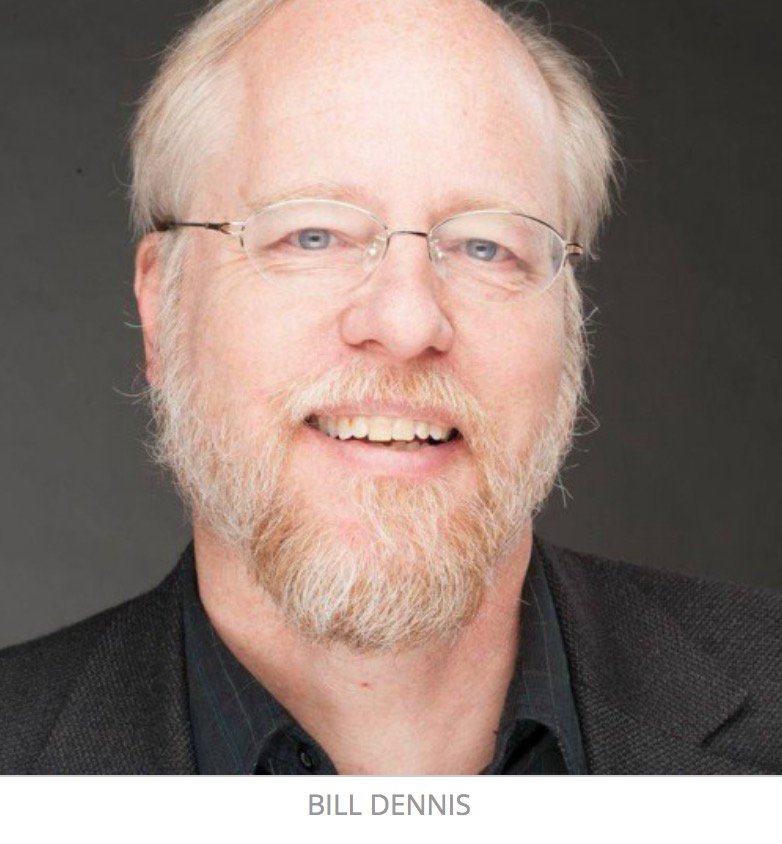 In late winter and spring of this year, when Bill Dennis became ill, he wrote a few Facebook posts. His playfulness and courage in the face of a news that would crush a lot of people are plain to see. In the first post, in February, "A stroke of good fortune," he writes about struggling to talk after what he believed was a stroke:

"I will have some speech therapy, but they felt it was minor. It has continued to get better, and may spontaneously be restored as before (which honestly, wasn’t THAT great, so maybe they can goose it up a bit—like add the ability to speak French or something…)."

I love that he described himself in the post as a "Cynical Optimist (“I wake up in the morning know full well that I will get screwed by something or someone during the day, but choose to be cheerful anyway.)" That sounds like a healthy personal philosophy.

Bill continued to work and travel from his home in Providence, Rhode Island. He attended the Seaside Prize ceremony in Seaside, Florida, and participated in a charrette in Fresno, California. On April 13, he posted again, revealing that "stroke" was a misdiagnosis. He had brain cancer.

"It is discouraged to post too much sympathy for me and my situation. Save it for the many billons of people who deserve your empathy (deduct how ever many you wish due to assholes).

None of us are guaranteed another day.

So I experience with a full heart the terrible beauty that is the world and the universe, as long as I have the great fortune to gather another day.

For indeed, I am a lucky boy."

In a follow-up post, Bill wrote about his treatment, adding: "I'm even having fun! (Although I always have fun…)."

Last year I lost my wife to this same disease. It wasn't a lot of fun. But even being able to say that you are having fun, and to emphasize how lucky you are to be alive at such a time tells you most of what you need to know about Bill Dennis. The other part is that he was very talented and committed to making the world a better place.

He also attended CNU 26 in Savannah in mid-May, where he saw many of his favorite people and colleagues for a last time. Bill was indeed lucky, and so were we all.

Next year in Louisville, at CNU 27, Bill Dennis's excellent drawings will be shown (for more on this, read below). Those who have originals of his work and would like them to be part of this show please email Howard Blackson <hb3@me.com>, who is organizing the show. 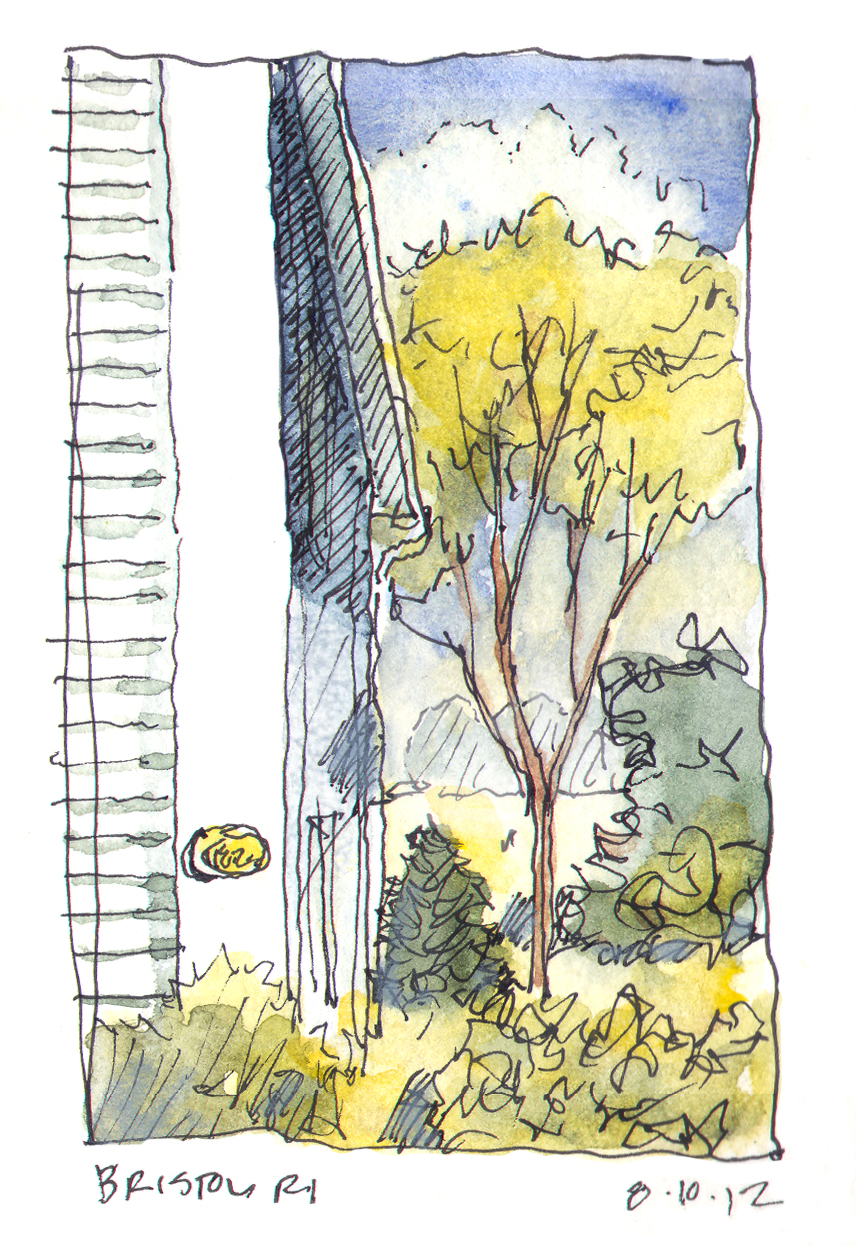 Bill Dennis was principal of his own firm, B. Dennis Town & Building Design—and was affiliated with Sargent Town Planning, serving as lead designer for selected projects. He was a founding member of CNU.

After Bill Dennis's passing, many urbanists were moved to write tributes. Below is one from Victor Deupi, an architect based in Miami.

A fond farewell to a friend

I’m not sure when it was that I first met Bill Dennis, though in the late 1990s I certainly saw him at any number of CNU or Modern Classical conferences and gatherings. I distinctly recall a lecture by Stefanos Polyzoides where he discussed the Civano project in Tucson, and Bill’s contribution as the lead designer of the team. Shortly after that presentation, possibly at whatever conference it was, I met Bill (and Mary–I loved how they traveled together for work) and was immediately taken by his sincerity and wit. His presence was that of a gentle man.

At some point around 2005 Bill and I started crossing paths more regularly, either as New Urban Guild members or as participants in the Seaside Institute trips. I recall New Urban Guild charrettes with Bill (and Mary) at Elim Valley, Utah, Blakely, Georgia, Omaha, Nebraska, and Lawrence, Kansas. In all of these, Bill played a lead role in coordinating the master plan while the rest of us were frantically designing building to slot in as necessary. Bill was the obvious choice for so many reasons, but I believe at the top of the list was his genuine affability and remarkable capacity to work with anyone - especially hot-headed, ambitious, young architects like me. Bill exercised authority with grace and subtlety and therefore garnered the respect of everyone working with him. I don’t recall there ever was a conflict when Bill was in charge. But what I remember most of those charrettes was the sociable side of Bill. He really was a funny bloke and never took himself too seriously.

Perhaps because Bill was ultimately an urban designer, he had a secret desire to produce work that was more tangible, more visceral, more “dirty” as he would have said with a straight face. I think that is why we began drawing and watercolor painting more regularly as it was a way of satisfying a certain hunger for in-the-flesh expression. Through several Seaside Institute trips to Pienza and Paris, Bill and I - and usually David Brain as well - would spend our days sketching buildings, landscapes, and public spaces. Bill took to watercolor quickly, and after a summer at the Tuscan Classical Academy in Capitignano (near Florence), a program that I organized for several years, Bill was hooked. His creative output flourished, and we would frequently discuss such arcane notions as point of view, atmosphere, value, and color. But most of the time, we would simply sit still for long periods of time, without saying anything, just focusing on the task at hand with the occasional “hmm,” or “awh,” as the water and pigment dictated our emotions. There is a special bond that occurs when two people are drawing in tandem, as if they are bound on a journey to some unknown place. Bill and I shared that ride on many occasions and I will never forget those drawing expeditions.

The last time I saw Bill was about five years ago when I was living in Newtown, Connecticut. He and Mary were passing through on their way to someplace for the July 4th holidays, and I was home alone–my wife encouraged me to forego a family excursion so that I could work on a book manuscript that needed to come to an end … that, and to feed the cats while she and the children were away. In any event, Bill and Mary stayed the night in our Connecticut farmhouse. We cooked, drank Brunello wine (Bill was not only hooked to drawing and painting in Italy), and the next morning we toured some of the lesser-known villages of northern Fairfield County. It was the perfect tonic for what was otherwise a grind of a time for me.

Thank you, Bill, for your kindness, grace, and friendship. Thank you for teaching me how to be a better person, architect, teacher, husband, father, and friend. I am a better man because of you.