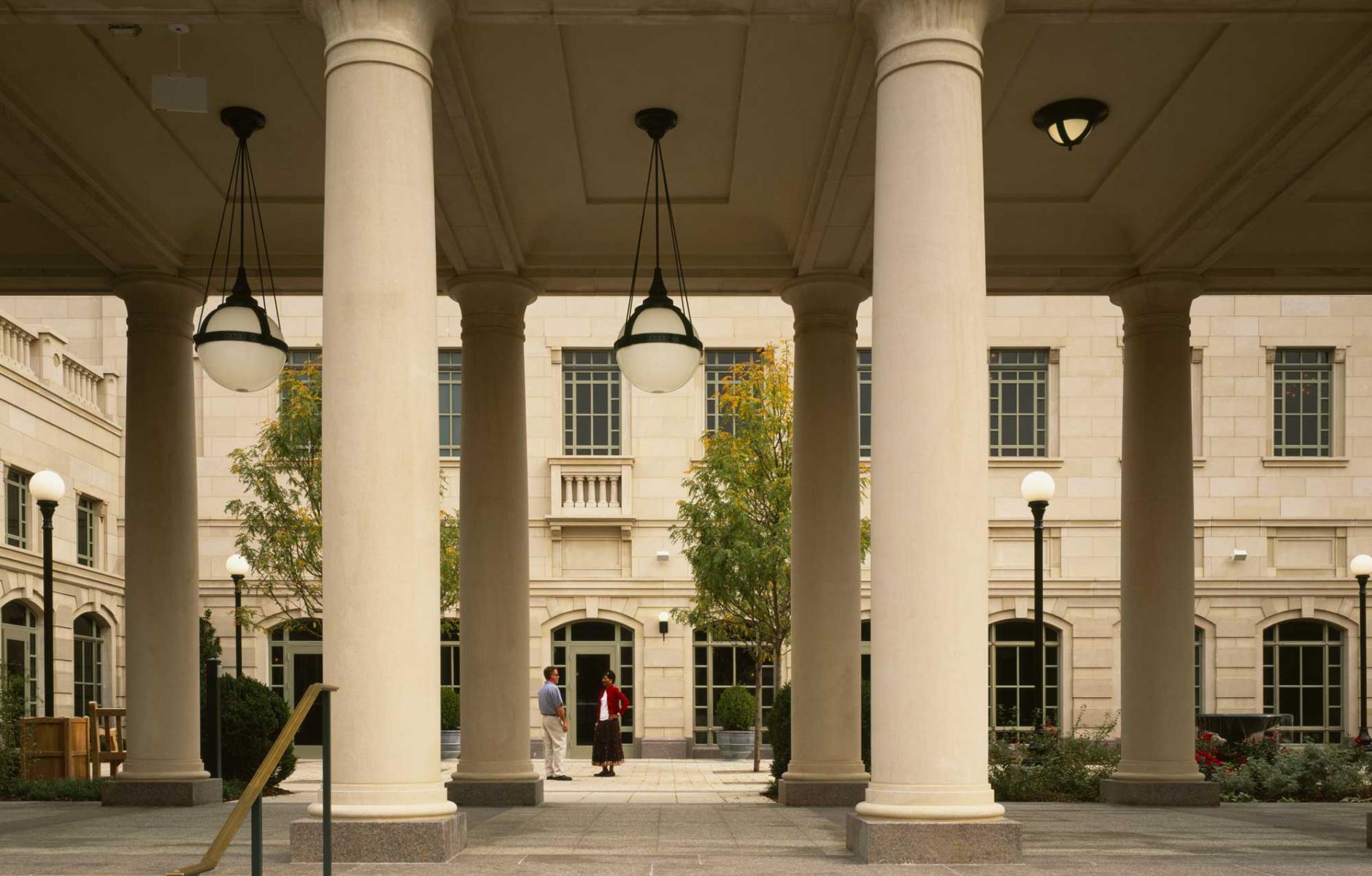 The survival of live classical music depends on many things, not the least of which is the design and urban planning around concert halls.
ROBERT STEUTEVILLE   &nbspMAY. 29, 2018

During any CNU Congress, its impossible to hear all the information provided or meet all the people who attend. Over several months, Public Square is highlighting people and ideas that CNU 26.Savannah attendees may have missed.

High culture is supported by walkable cities and human-scale architecture, according to analyses of the Future Symphony Institute, which is studying and promoting strategies for the renaissance of live classical music. Public Square editor Robert Steuteville interviewed Andrew Balio, who founded the Future Symphony Institute and is principal trumpet with the Baltimore Symphony Orchestra. Balio explains why concert hall architecture and urban planning are important to orchestras, the mistakes that have been made in the the design and location of these halls, and how these mistakes are being rectified. Balio attended the recent CNU 26.Savannah and performed a trumpet duet with Dan Cathy, chairman and CEO of Chick-fil-A Inc., whose foundation was a major sponsor of the event.

What does classical music have to do with urbanism, and how is the Future Symphony Institute addressing that connection?

Balio: Our primary concern with the institute is to ask the question ‘how to increase demand for classical music.’ Another way to put it is to ask what are the obstructions to people attending classical music concerts. We discovered that both the concert halls and the urban planning around the halls can either be a major stimulus to participation and audiences, or it can be a major impediment. It is not a black and white, however. You can look at any number of concert halls. Maybe they succeed as a hall but didn’t succeed in terms of being connected to the street or being part of community. Look at the Los Angeles Philharmonic hall, designed by Frank Gehry. That’s a kind of modernism that may not work anywhere else, but it is perfect for LA. Because the orchestra has such deep pockets due to owning the Hollywood Bowl, they were able to weather the 20 years until their neighborhood caught up to the Disney Hall. Now a tremendous amount of development is taking place and no doubt it will stimulate more people to attend. The concert hall will be an iconic building that will be part of pedestrian life in the area.

Sometimes investments are made on a concert hall on cheap land in the hopes that the neighborhood will catch up. It doesn’t always work out that way. Sometimes concert halls are stuck in urban dead zones, and it really suppresses the ability or orchestras to attract audiences.

That’s not intuitively obvious because if you really want to experience the symphony, you wouldn’t necessarily be discouraged if it is in an out-of-the-way location. Yet your research has led you to see this connection between urbanism and how well the symphony is doing.

Balio: If you really want to get to the symphony, you will find a way. You are talking about a segment that we call the zealots. There are people who love classical music so much that even if you had all your concerts in a secret location in an underground bunker, they would find it.

But because of the way our culture has gone in so many directions, it is a challenge to get people to want to go to a concert. Culture isn’t dictated from the top down, it grows from the bottom up.

Are there other market segments that might be influenced by where the hall is located and whether there is a neighborhood around it that is walkable?

Balio: The next layer of audience members we would want to get would be the friends of the zealots. Why aren’t they coming? These are people who are going to look like the audience you already have. As you go further out, we have people who already have these proclivities, yet they may never have gone to a classical concert. You will never have a perfect place for a concert hall, but you might as well put it as close as possible to the people who are supporting the institution. Generally they are part of city centers. We would also like to get the orchestras as community members to be part of the larger conversation of how do we make the cities livable again.

The Civic Center in Savannah is a good example. The location is marvelous, but the building doesn’t relate as a good neighbor to what is around it. It’s a big blocky thing dropped into a human-scale place. It should fit into the local language.

That must be difficult, because you are talking about putting a large-scale concert hall into a neighborhood with smaller buildings.

Balio: If it is done well, it would be like a large church. A cathedral is still human scale, but it’s multiplied out.

What is the strategy of the Future Symphony Institute in dealing with these issues?

Balio: We aren’t the experts, but we know who the experts are. We are trying to raise awareness among the classical music community and say, “This is Leon Krier, this is Dhiru Thadani, this is Roger Scruton, these are people we could learn a lot from. They have already thought through many of the issues we struggle with.” Orchestras struggle to deepen their connection with their own communities. The people I named have described how architecture and urbanism contribute to an orchestra being a part of a community. When I look at orchestras that are struggling, if they have a badly designed concert hall or are located in a lousy part of town, the new urbanists know how to heal that. As they say in retail, 90 percent of the sale is getting somebody on location.

It strikes me that a concert hall could be an anchor to a community that is revitalizing. And, as downtowns are coming back to life with people moving in—that must be good news for orchestras.

Balio: One of our sayings is that as the city goes, so goes the orchestra. Our destinies are very much tethered to the direction of the overall city. Certainly a hall can be an anchor institution, but if nothing is going on inside the hall most of the time, then it is dead space. It is important that as we design these halls they can be used throughout the day. One of the things that I am trying to do is to re-imagine the foyer of the concert hall as a shared workspace. It could be like a public library, where pretty much anyone can go in there. What if we were to merge public libraries and concert halls so that the experience is like going into a learning center that has a concert hall within it? The hall is the orchestra’s home and we need more people coming in. Even if they have no interest in music we might be able to entice them.

Are the managers of concert halls and those who contract to have them designed and built—are they aware of these issues that you are talking about?

Balio: I know they have really good intentions. Our institute would like to intercept these people when they are in the early stages of planning. Hopefully they will download some of our materials. In a way, we are a think tank, trying to take an enormous amount of information and distill it down to something that is easy to digest.

How do concert halls go wrong?

Balio: Because there is so much money involved and so many constituencies with a concert hall, the bigger the project the worse they tend to get. They want to overcompensate. When it takes a tap of the hammer they take a sledgehammer out. When the hall goes over-budget, they start cutting out the very things that would have made the facility function well. Because they are afraid of screwing up, they always look at other concert halls and replicate their mistakes. The glass box, for example, just keeps replicating. But at night nobody is looking inside a concert hall, and nobody is looking outside, either. You have all this light that reflects off the glass, and it just looks like a mirror.

Are there a couple of concert hall projects that you would point to as really doing things well?

Balio: Boston Symphony Hall is perfect. It was built over a hundred years ago. It is acoustically one of the top three concert halls in the entire world. It is a simple double cube. It just has perfect acoustics and it is gorgeous. They need a lot more space so they just added all of these additions on to it using historically relevant designs or connecting to nearby buildings. When they open the doors to let people out, you can look inside and still see the orchestra on stage from your bus stop. The Cleveland Orchestra has an incredible hall that architect David Schwarz renovated. He also designed one in Nashville (Schermerhorn Symphony Center) that was a real design challenge. It wasn’t a great piece of land for a hall, but they made the best out of that situation. It really added a huge amount of value to that part of town.

What’s coming up with the Future Sympony Institute?

Balio: We would like to be part of the new urbanist conversation. Quite often these concert halls are anchor institutions in communities with much larger goals. We’d like to help all parties get it right. I see a great deal of alignment. Our work is to try to take your world and convey it to this finite community of musicians, managers, board members, and architects to help relay these messages.