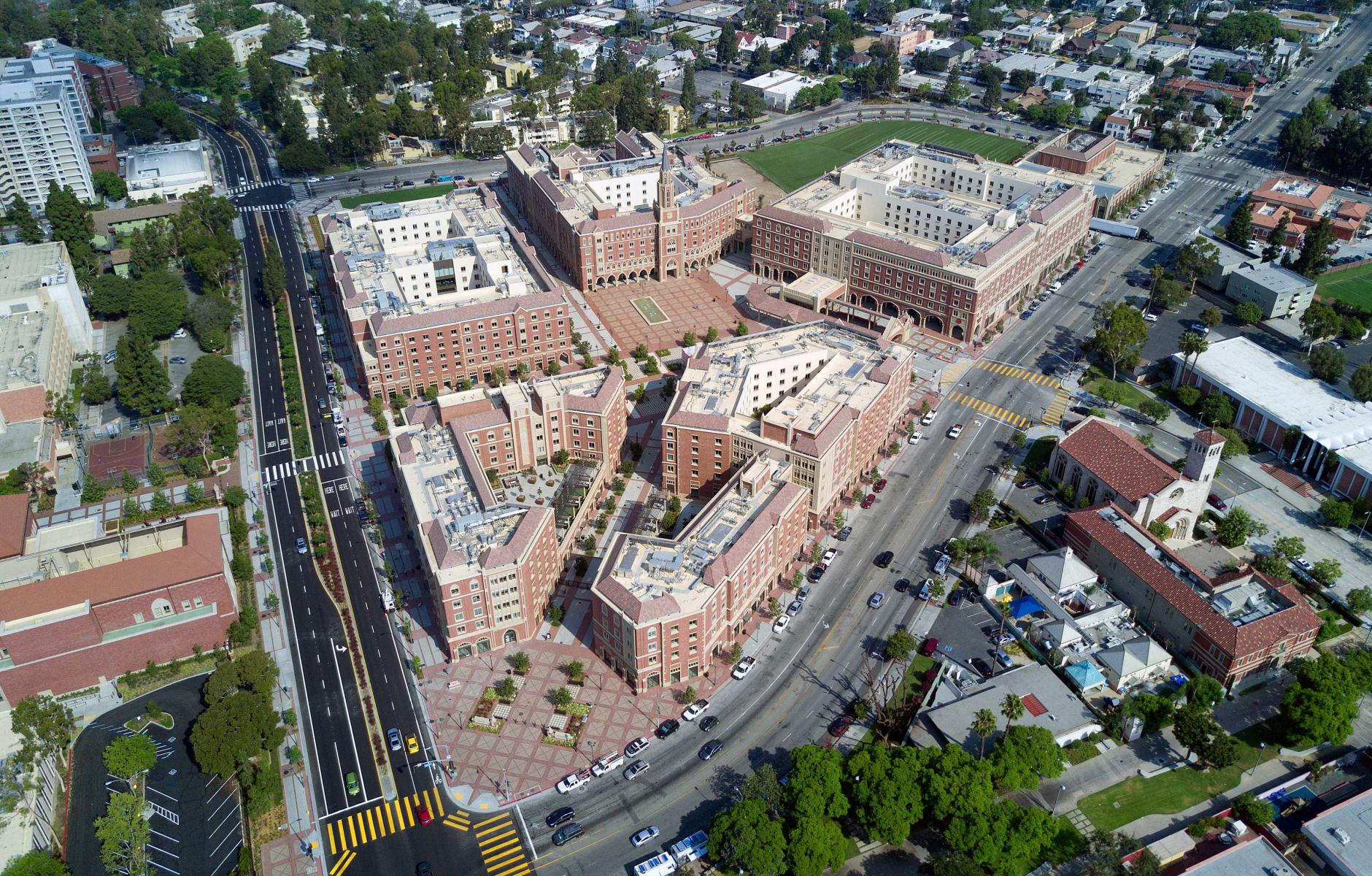 University builds a transformative development in an area that hasn't seen much investment in recent decades.
ROBERT STEUTEVILLE   &nbspMAY. 22, 2018

The New York Times calls USC Village, which opened in 2017, "an ambitious test of a public-private partnership hoping to remake a historically underserved neighborhood."

The $700 million project designed by Harley Ellis Devereaux creates housing for 2,500 University of Southern California students, 8,000 permanent jobs, the first sizable grocery store built in South LA since the 1960s (Trader Joe's), and public spaces that are accessible to the city during the day and evening.

The residential units occupy upper floors above a ground floor comprised of retail, classrooms, fitness center, and other amenities. Below grade parking is provided for 467 vehicles along with indoor parking 1,260 bicycles.

Previously, the 15-acre project site had been occupied by a low density retail strip-center with internal circulation bounded by service areas and parking lots facing the surrounding community.

The building facades are designed in "collegiate gothic vernacular" style, which fits in with USC's campus across the street. Completed in 2017, the Village is the largest development in the history of South Los Angeles, the design team reports.

The "guiding vision" is to build community; internally—within the USC campus and student-resident communities, and externally—between the University and the surrounding neighborhoods of University Park, Adams-Normandie, and South Los Angeles, note the designers, Harley Ellis Devereaux.

New crosswalks on West Jefferson Boulevard and Hoover Street site help to make the busy LA thoroughfares more pedestrian friendly. Public spaces, pedestrian paths, and paseos open up the interior of USC Village from every angle—especially where streets intersect. A large clock tower, water fountain, and other architectural features terminate vistas from the outside. USC Village has major public spaces that will be shared by students and the general public, although internal public spaces and passages will close to non-students after 10 p.m.

"USC has long been criticized for being an inward-looking institution, one that insulates itself from South LA. Its new expansion project, USC Village, is hailed for changing that," notes LA Weekly.

Project site planning reflects its location at the intersection of two city street grids; the newer grid that organizes most of the city, and the grid of the historic Spanish Pueblo that was oriented to leverage prevailing winds for summer cooling, note Harley Ellis Devereaux. Operable windows provide natural ventilation in all units. An analysis confirmed cooling from prevailing winds during hot summer months for courtyards and residential units.

The NYT story outlined agreements with the community on jobs and other issues:
Among the commitments the university made was a $16 million fire station built on university land and at no cost to the city, as well as a $20 million pledge to Los Angeles’s Affordable Housing Trust Fund, which is meant to offset concerns about how the addition to the neighborhood could drive up the already prohibitively high cost of housing. The university also promised that 30 percent of workers employed for the project would be from the local area.

As a result, of the 4,000 construction workers who helped build USC Village, 38 percent were from within a five-mile radius. Many of them have gotten work with other contractors in the area after their various parts of the project were finished.

The project’s labor agreement also includes stipulations for preferential hiring of military veterans, the formerly incarcerated and “disadvantaged” workers, including minorities, people with disabilities and those with a history of homelessness.

In all, combined with the influx of retail tenants at USC Village, another 8,000 permanent jobs are being added, and will be filled with the same local-hire provisions as the construction work. 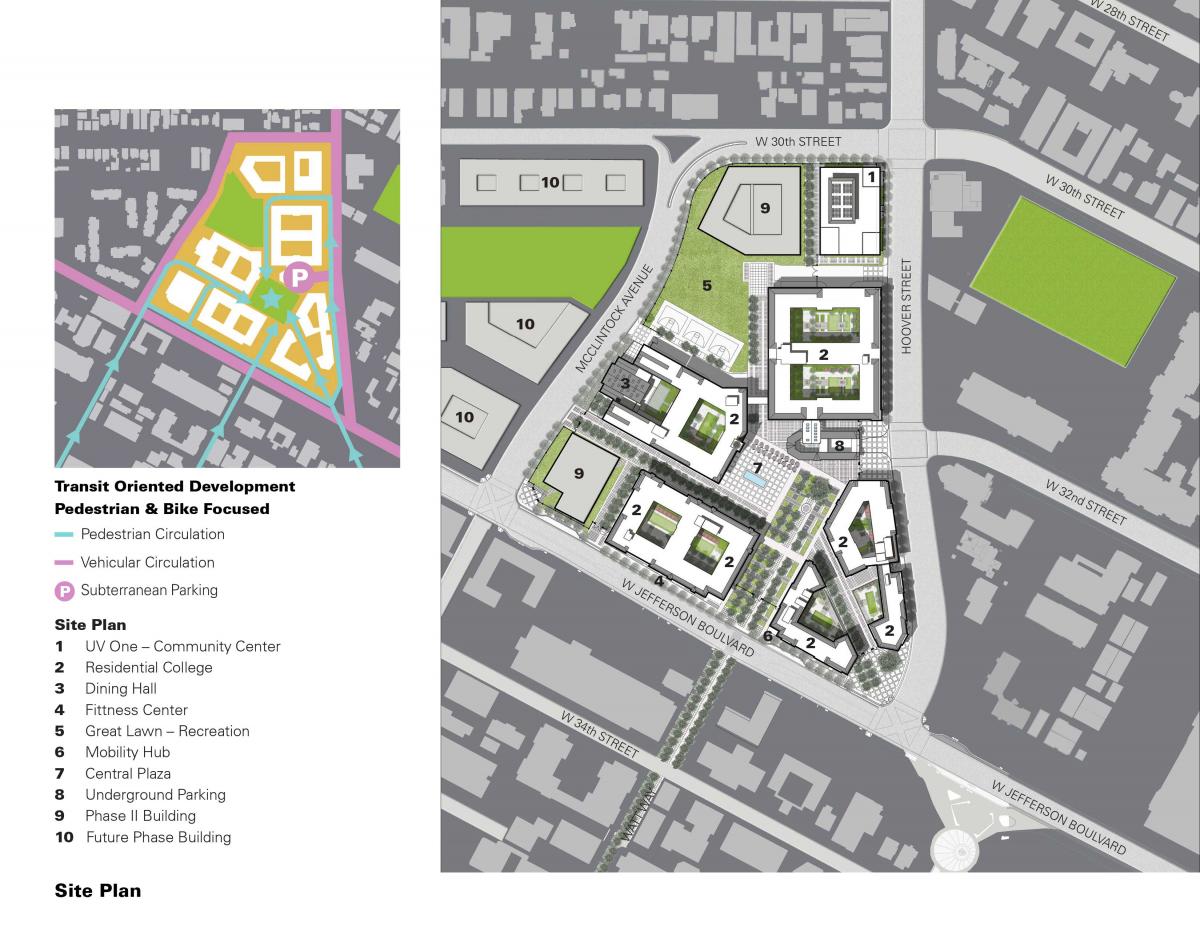