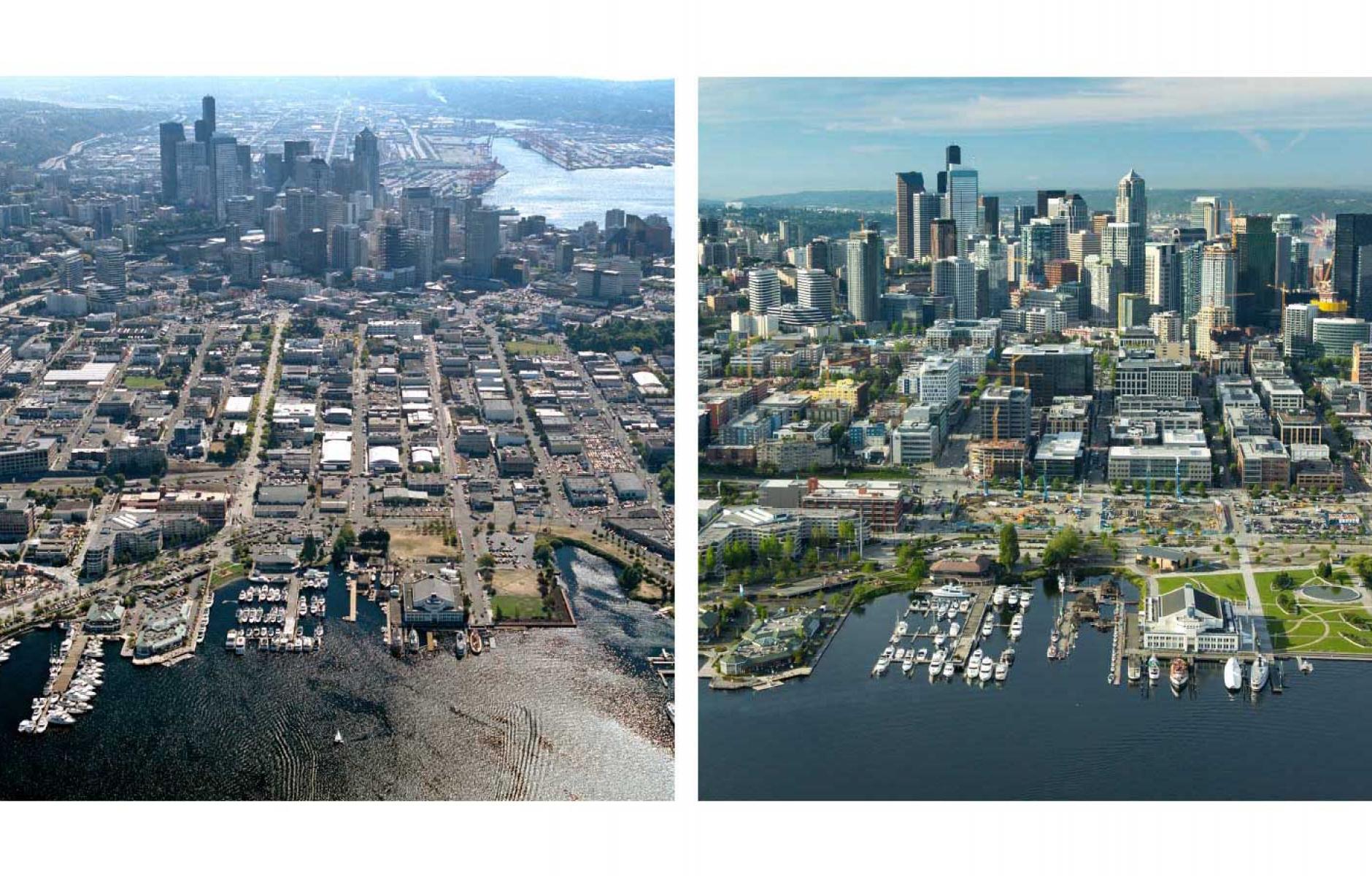 South Lake Union in Seattle, before and after redevelopment. Source: Catalytic Development
Development

Why did Dan Gilbert invest billions in downtown Detroit and stake his home-loan empire on a city going through bankruptcy? Financial experts would caution against such a move—but it appears to be paying off as Gilbert buys more and more property and announces ever larger deals.

Gilbert’s Rock Ventures have acquired and rehabilitated more than 90 buildings and brought more than 16,000 employees to Detroit’s now resurgent downtown and owns more than a quarter of the land inside the city’s People Mover transit loop.

Catalytic development often takes place in a languishing downtown or district where a lot of money is invested in jobs, housing, public spaces, and often transit, catalyzing economic substantial growth and value.

Released today, the report is by real estate expert Christopher Leinberger and Tracy Hadden Loh, a data scientist with George Washington University. In recent years, Leinberger has researched and promoted the idea of Walkable Urban Places (WalkUPs), regionally significant mixed-use urban centers, which have been the biggest trend in commercial development since 2008, he says. Catalytic development is one strategy for WalkUPs. Catalytic development does not work in automobile-oriented, drivable suburban places.

Catalytic development rests on a “three-legged stool” of patient equity, integrated development, and employment—and that gives this process its “stability and speed.” Leinberger and Loh write. Catalytic development requires more planning and yields lower returns in the early years—therefore requiring investors with a long-term horizon. But over time it can yield enormous returns. Superior value creation and long-term cash flow are why walkable urbanism “the basis of most of the substantial real estate fortunes of the past centuries and the current group of long-term owners today,” the authors note.

The investors must assemble mixed-use parcels in close proximity, playing multiple integrated development roles as required to transform a place. “As one real estate asset begins to perform, it helps the adjacent assets in the upward spiral of value creation.” And, unlike downtown revitalization efforts of the last century, catalytic development beings with employment—not urban entertainment.

The report lists details six case studies of “catalytic development,” three of them located downtown, and three in neighborhoods near downtown. Three examples are from major cities, and three from small-to-midsize cities:

In other cases, the main investors were nonprofits or institutions.

“A walkable urban place requires a dense street grid with small blocks and many pedestrian connections. A historic neighborhood like Over-the-Rhine, no matter how distressed, is a candidate for catalytic development because of the enduring value of the pre-automobile layout of narrow streets and frequent alleys. The “cataclysmic” developments of the urban renewal period were problematic in part because they removed streets and consolidated superblocks that reduced the walkability of an area. Catalytic developers today, because they are horizontally integrated, bring a unique capacity to restore street connectivity and establish pedestrian connections that a smaller scale developer might not have the capacity to do,” the report says.

The authors stress the potential social equity benefits and the importance of addressing such issues. Catalytic developers can "do well by doing good" when they invest in people and local enterprise, the authors note.

The driving force behind revitalization of Over-the Rhine in Cincinnati, 3CDC has a conscious strategy to hire local residents. "When asked what revitalization means, Steve Leeper of 3CDC simply said: 'Employment. Most people are now outsourcing clean and safe services ... We stopped doing that. We brought everything in-house. That allows us to hire from the neighborhood. It also means we can hire people who, when you do their background check, it might not be coming back so clean. That’s all part of our mission. When you see the people that are living in a mixed-income project now working over in the civic space, that, to me, is what revitalization is.' "

Catalytic development allows for the “pushing of the fast-forward button” to achieve critical mass, the authors say. "This translates into improved economic development, increased social equity (if there are conscious affordable housing, workforce, and entrepreneurship programs in place) and is an important means of addressing climate change. With probably 20 to 30 years of pent-up demand for walkable urban development until it is satisfied, and hundreds of WalkUPs throughout the country that need expansion and creation, this new model of development comes along at a propitious time for the economy, society, and the environment."