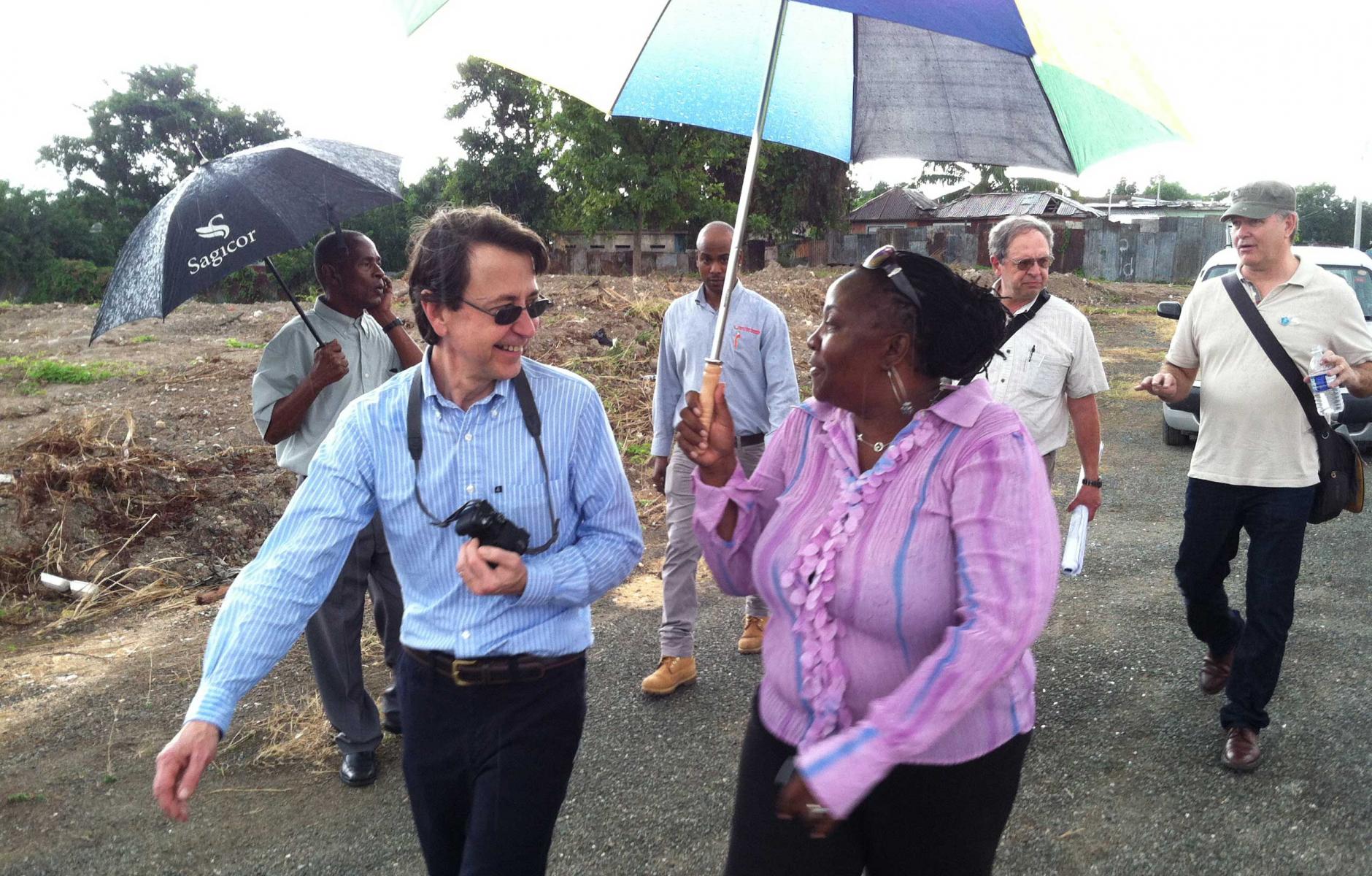 Hank Dittmar in 2013 with a neighborhood leader in Rose Town, Kingston, Jamaica, where the Prince's Foundation was touring the area for a design charrette. Photo courtesy of Paul Crabtree.
Community

New urbanists lost a respected and capable leader early this week. Hank Dittmar made a difference in urban planning and transportation on both sides of the Atlantic.
ROBERT STEUTEVILLE   &nbspAPR. 4, 2018

Few urbanists anywhere could boast the wide-ranging influence and experience of Hank Dittmar, who died during the night Monday in Scotland after a long illness. He advised Prince Charles and the Clinton Administration. He was the third director of the influential Surface Transportation Policy Project (STPP) and he cofounded Reconnecting America, a nonprofit that strives to link cities and regions through rail and bus lines and transit-oriented development.

In the 2000s, he used tremendous energy and organizational skills to chair the Congress for the New Urbanism in the US while directing the Prince's Foundation for the Built Environment in London—serving as a leader in the top urbanist organizations in both the US and UK.

Dittmar was an early advocate for transit-oriented development—he co-edited the 2003 The New Transit Town, one of the first books on the subject. He was Prince Charles's right hand man on architecture, urbanism, and sustainability from 2005 to 2013.

In the last five years he founded Urban Futures, an international urban planning consultancy, and helped to lead the Lean Urbanism movement that was initiated by Andres Duany. He chaired the CNU board from 2003 to 2008. He won the Seaside Prize in 2008, among the highest honors for new urbanists.

"His passion and desire for urbanism were enormous," says Lynn Richards, President and CEO of CNU. "His contributions to this cause span decades, from organizing the STPP to leading the charge on Lean Urbanism."

My first memory of Dittmar was at a session on transportation policy in 1997 in Maryland, where he led a discussion on strategy. He was a ball of federal transportation policy energy, and it seemed everyone in the room was calling out his name. I was surprised to see him turn up several years later at CNU, also knowledgeable on urban design.

"Every year I give a lecture to my students on people I consider heroes of our professions. Hank is one of those heroes," says Kit McCullough, a lecturer in architecture and urban design at the University of Michigan. Dittmar had "a rare combination of incredible professional skill and intellect, and a modest, down-to-Earth manner," wrote architect Kevin Klinkenberg. Both statements were made on the Lean Urbanism listserve, where Dittmar was an active participant.

A day before he died, Dittmar posted a substantive listserve comment on edible plantings on urban streets in Britain. "The Incredible Edible Network has grown to over 50 groups, and has a network to help people start up in their community, providing the roadmap. and they have gotten funding to provide technical assistance to new groups," he wrote on April 1. "Full of life to the last day," commented architect and urban planner Steve Coyle.

I sat in on the CNU Charter Awards jury in 2016 chaired by Dittmar. He was already physically ill, but you wouldn't know it by his management of the  jury of prominent urbanists. With a firm and confident hand, he used the power of persuasion to close out arguments and reach reasoned decisions on award winners.

Born in Oklahoma and trained as a communicator and debater at Northwestern Univesity, Dittmar then earned a masters degree in urban planning at the University of Texas. He cut his teeth professionally in California, where he worked for the mayor of Santa Monica, says Scott Bernstein, founder of the Center for Neighborhood Technology and a close friend. The city has a municipal airport, and Dittmar had to get a pilot license to negotiate with the other pilots. Takeoffs and landings at odd hours were disturbing residents of nearby neighborhoods, says Bernstein. Dittmar solved the scheduling problem and turned underutilized hangars into money-making municipal assets—one became an aviation technology school, another a business incubator, and a third housed fine restaurants.

Dittmar then worked for the Metropolitan Planning Commission in the San Francisco Bay Area, where he helped to manage an $11 billion budget, Bernstein says. That was excellent preparation for running STPP.

"The built environment has many dimensions to it, including getting the buildings right in a walkable urban environment, transportation planning and design, the utilities below ground, and the quality of the natural environment above," says Bernstein, who hired Dittmar as executive director of STPP. "Hank lived and breathed all of the aspects of the built environment. He really knew them well. He also knew the policy side of things. He was the most effective lobbyist we had in transportation reform."

Bernstein added: "Hank was a great leader even before he fell in love with New Urbanism. He was a terrific colleague and collaborative to a fault."

Dittmar was a life-long learner, always striving to take on the next challenge. As the Chief Executive of the Prince's Foundation, he ran their small accredited design school. There, he learned the skills of an architect as he managed projects throughout the former British Empire, Bernstein explains. In his final years he worked on a book on "do-it-yourself urbanism," the idea that with flexible, common-sense rules, ordinary people can build cities and towns.

"Hank lived by the credo, 'first listen, then design,' explains Bernstein. "He was really good at that, and he didn't know any other way."