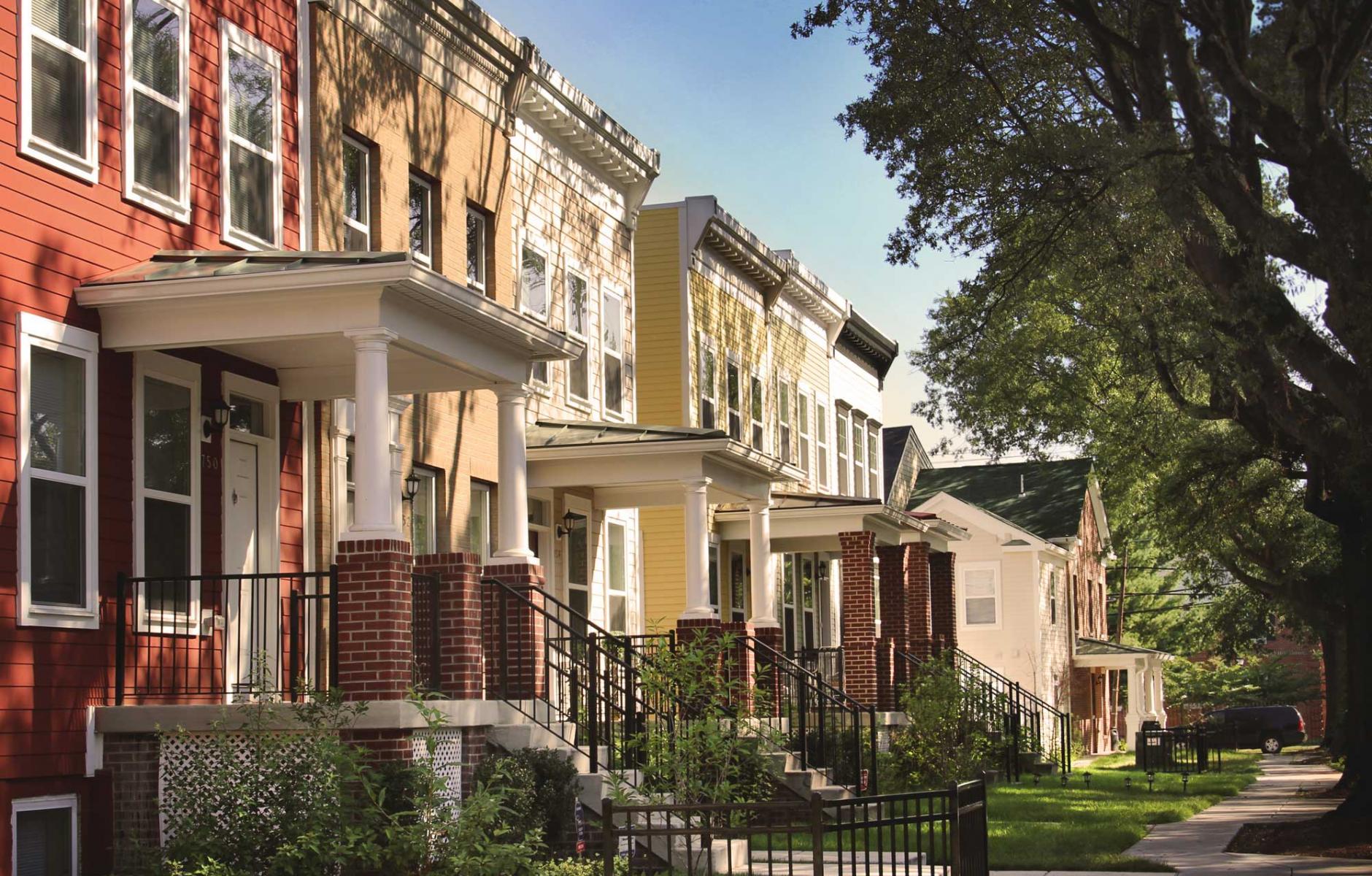 On the East bank of the Anacostia River, just a few miles from the US Capitol, Pollin Memorial brings a historically sensitive approach to affordable development in Washington, DC. Serving one of the country’s most challenged urban neighborhoods, the project has provided 83 for-sale townhouses to District employees, emergency response professionals, teachers, and nurses—in addition to 42 flats for public housing residents.

“It has been transformative for the neighborhood and meets a real need for the city,” says Christine Madigan, Executive Vice President of Enterprise Homes.

The $34 million project was made possible by a donation from affordable housing pioneer Abe Pollin, a long-time champion of underprivileged DC residents, in memory of two of his children. “I’ve had people come into the sales office crying, saying, ‘Oh, Abe is still doing it.’ He was so great to the community,” notes sales manager Tawnya Brown.

The buildings’ style consciously derives from the “Wardman townhouse,” a type built all over Washington, DC, by a prolific developer at the turn of the 20th Century.

The architects carefully studied the context, including the key architectural features of porch-and-stoop townhouses, the block and street patterns, and the disruptions caused by a 1960s highway. Homes can be purchased by eligible residents for as little as $500 down.

Saving existing trees was an important goal, and the framework of blocks integrates Pollin Memorial into the city. Residents are just a five-minute walk to the Metro, accessible urban shops, and an adjacent public elementary school and charter school.

The public, semi-public, and private realms are carefully designed, and a nature path connects the homes to the nearby Anacostia River Park, a regional open space amenity. Part of the 9-acre site is preserved as open space and wetlands.

The team synthesized the input of stakeholders, city and federal agencies, and the various professions involved in design to improve the project. Countless challenges—including issues of land title, previously undiscovered soil pollution, and multiple layers of complex financing— were overcome to bring this affordable, sustainable, outstanding development to fruition.

Pollin Memorial is sited next to an existing affordable new urban development called Parkside. These projects show the cumulative value of New Urbanism in a transit-supportive, in-city context.

Pollin Memorial won a 2016 Charter Award for Torti Gallas and Partners from the Congress for the New Urbanism.