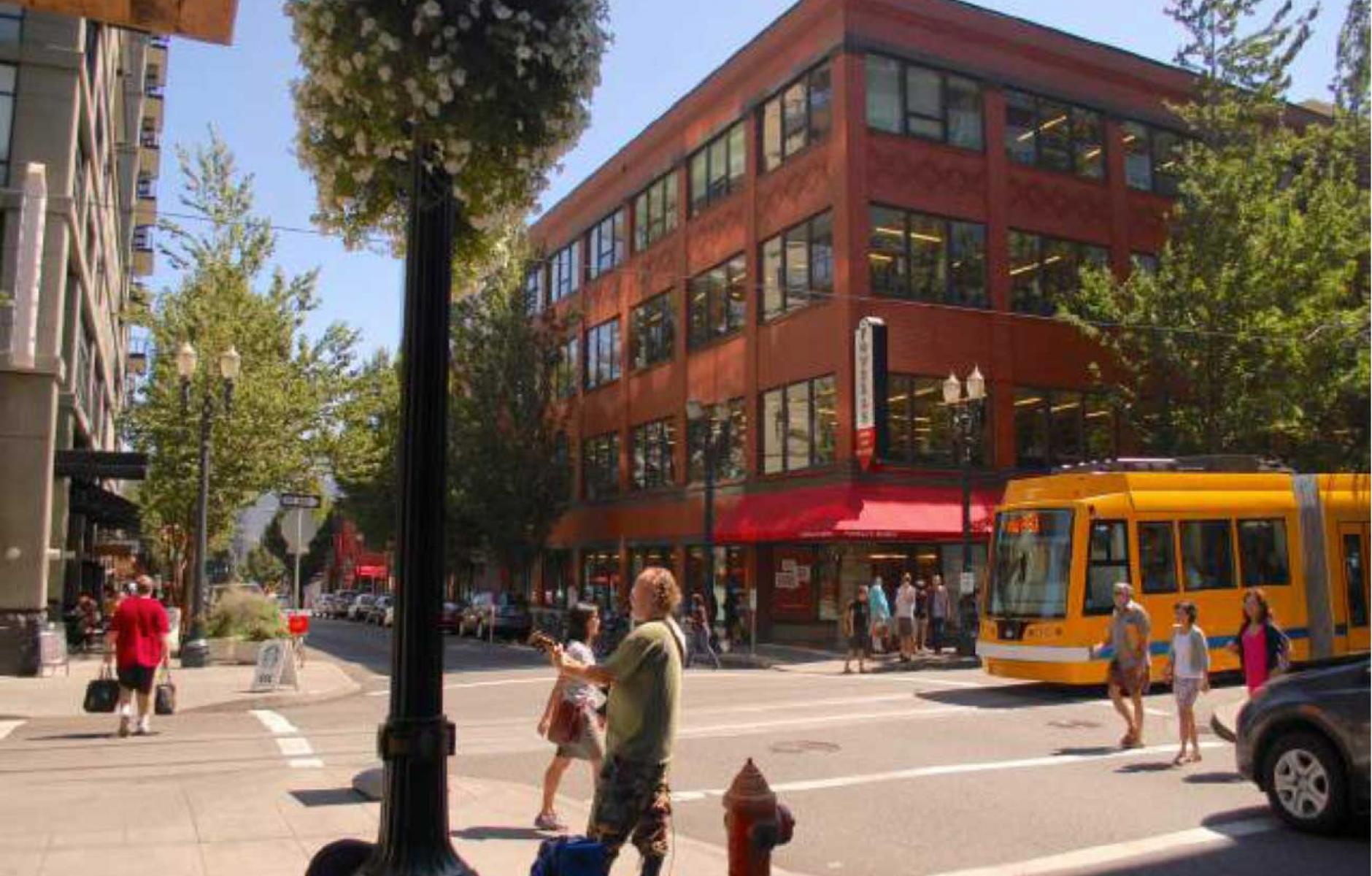 The Portland Pearl District, a similar of the new urban renaissance with its streetcar, bikes, pedestrians, and musician. Photo courtesy of Michael Mehaffy.
Design

I realized soon after I delved into Cities Alive that I was reading an important analysis for urbanism—now and in the coming decades. Those in the land-use planning and development business know the stories of urban renewal damage, the failure of modern urban projects like Pruitt-Igoe, and the consequences of suburban sprawl. Most are are familiar with Jane Jacobs's The Death and Life of Great American Cities and Christopher Alexander's A Pattern Language, both of which have been influential in urban planning, architecture, and other fields.

But something was going on at a deeper level that underlay the dysfunction Jacobs and Alexander fought from the 1960s onward. Cities Alive by Michael Mehaffy examines Jacobs and Alexander together to get at the root philosophical problems that created erroneous thinking in city building in the 20th Century, continuing to the present day.

Historic cities and towns were built by centuries of knowledge encoded into culture. Conscious and unconscious, that culture produced plazas of great beauty in Tuscany hilltowns, the winding and intimate back alleys of Beijing, and iconic US main streets. Beauty itself is not merely aesthetic, Mehaffy explains, but rather a marker for what is good for us as human beings. Nowadays when we want a plaza or main street we outsource the job to architects and engineers who use theory that they learned in school that often has nothing to do with centuries of encoded culture. They bypass what makes human communities successful. The result is a 21st Century built environment that is full of dysfunction and disorder that we read as ugliness.

Mehaffy compares and contrasts the ideas of Jacobs and Alexander, tracing the roots of their thinking and the problems they identified back to Plato and Aristotle, through the Enlightenment and Modernism and finally post-modernism.

I've read Death and Life and have a thorough understanding of Jacobs's ideas on cities, but I'm less familiar with her influential work on urban economics. I've read some Alexander, but never explored the depth of ideas described by Mehaffy. My understanding of these polymaths—Jacobs with little advanced formal education and Alexander with graduate degrees from world-class universities in physics, mathematics, and architecture—is greatly enhanced by Cities Alive.

Philosophically, both Jacobs and Alexander are "structuralists," Mehaffy explains. They examined and understood cities through their physical structure and the language we use to describe that structure. Jacobs, for example, applied structural thinking when she asked about “the kind of problem a city is,” the ultimate chapter of Death and Life. To Jacobs, cities were not machines, as modernist planners thought. They were more like organic life forms.

The machine-view of cities and towns came through a hyper-rationalist approach that rejected historical placemaking wisdom in its entirety. In the early to middle 20th Century the world was going through massive technological changes that often brought miraculous and mind-blowing advances: Penicillin, air travel, mass communications, highways and automobiles, and the hydrogen bomb. Traditional knowledge was out and the technical expert reigned supreme.

In Alexander's influential essay A City is Not a Tree, he explores the structure of cities and the mistaken ideas of modernist planners, who thought of planning in terms of hierarchical branching patterns. Picture the dendritic street patterns of modern cities and suburbs that lead to monotonous similarity in sprawling places. Settlements actually work best as "semi-lattice" structures, he explains. Think of the connected networks of streets in traditional cities and towns, a pattern that leads to more complex social and economic connections.

But just as Jacobs and Alexander were gaining a wide audience with their brilliant observations in the 1960s, something strange was about to happen to academic philosophy in general and the study of architecture in particular. Post-modernism and post-structuralism, in the 1970s, critiqued structures themselves and focused on power hierarchies and language. Stripped of a serious structural analysis, architecture became ironic and, to a degree, nihilistic. Mehaffy quotes big-name architect Rem Koolhaas in the mid-1990s.

The seeming failure of the urban offers an exceptional opportunity, a pretext for Nietzchean frivolity. We have to imagine 1,001 other concepts of city; we have to take insane risks; we have to dare to be utterly uncritical; we have to swallow deeply and bestow forgiveness left and right. The certainty of failure has to be our laughing gas/oxygen; modernization our most potent drug. Since we are not responsible, we have to become irresponsible.

In other words, architects should be free-form artists and have fun. Jacobs criticized this attitude. Art is vitally important, she says, but it is only part of the city's whole. Art is not life, while the very purpose of the city is to support life. While the city is constantly growing and evolving, buildings designed as sculptures in their final state have a quality of deadness. She scathingly referred to this approach as "taxidermy."

More so than Jacobs and Alexander, Mehaffy addresses cities and towns at all scales. Cities are going through a renaissance in the US and elsewhere, brought about in no small part by these two thinkers, who challenged the dominant forces of architecture, starting in the mid-20th Century.

"In this renaissance, Mehaffy says, "as in the more famous one half a millennium ago, the phenomenon of beauty will play an outsized role. It is the deeper beauty of a life well lived, of a street full of people and vegetables and sunlight and energy. It is something much deeper than the superficial and manipulative beauty of a consumer product or even an exotic artwork."

This reminds me of a quote from an Andres Duany plenary speech at CNU's Congress a few years back. "You can turn the pall of today’s crises into virtues. The virtue of opening a window, or a beautiful sweater, or a front porch, or walking to things, or localized agriculture."

Worldwide, meanwhile, the forces unleashed by suburban sprawl are still churning up the landscape, especially in developing countries. "Of course it is possible, up to a point, to replace the diversified, continuous public realm of urbanism, and the catalytic growth it produces, with a system of segregated, machine-like capsules: automobiles, isolated offices and campuses, suburban housing monocultures, and the like," Mehaffy writes. "It is possible, in other words, to trade away a 'natural human-capital city,' for an artificial kind of city that is nonetheless economically productive, at least in the short term. Indeed, we can see many examples in the US and other countries.

"But this economic development is only possible with massive injections of resources — notably fossil fuels — at unsustainable rates. We could think of this this model as the “crack cocaine” of urban development: it will certainly produce a very quick and intense high, but one followed by a disastrous (in this case planetary) hangover.

"This is the urban crisis that we now face. The world is rapidly urbanizing according to precisely this addictive model. We are on track to produce more urban fabric by area in the first five decades of the 21st Century than we have produced in all of human history."

So the world is at a crossroads. On the one hand Jacobs and Alexander and like-minded thinkers—notably the new urbanist movement that Mehaffy describes in detail—have brought a renewed appreciation for cities and towns and how they function. The machine of sprawl—aided by international finance, the land-use professions operating in silos, and government investment and regulation—is more powerful than ever worldwide.

The answer lies in moving forward with the sophisticated thinking of Jacobs and Alexander—particularly the "patterns" of Alexander that have widely influenced computer programmers, Mehaffy writes. Alexander explains how these same patterns shape our world. Mehaffy says that architects and planners can make them living patterns:

"These coded bits of knowledge are surprisingly sophisticated and powerful, and we are beginning to recognize that our own supposed 'modern' practice of sweeping away all traces of 'historicism' is, from an evolutionary perspective, actually quite primitive and foolhardy. A more sophisticated, nuanced and complex approach would open us up again to the vast repositories of history and nature."

Just as we have been the authors of destruction in our world, we also hold the keys to the revival of sustainable community building. There is much more to Cities Alive than I was able to describe in this review. It is worth a read.