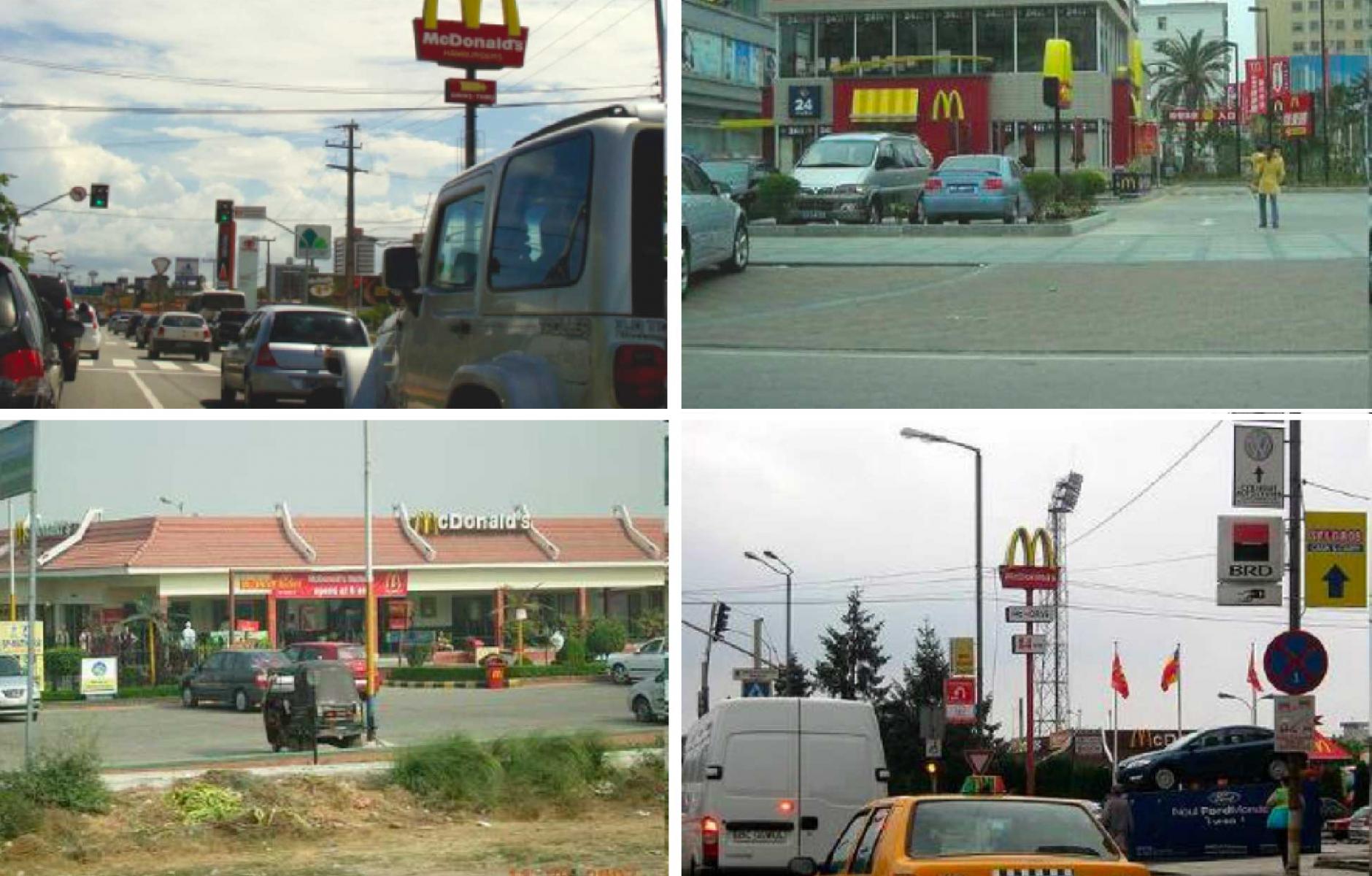 The drive-through lifestyle, exported by America and adopted worldwide, is the "operating system for growth" that is a root cause of rising carbon emissions.
MICHAEL MEHAFFY   &nbspNOV. 13, 2017

A few years back I conducted a little experiment. I went onto a popular image-sharing website to see how difficult it might be to find new drive-through McDonalds restaurants in four different, rapidly-growing parts of the world: Brazil, India, China, and Eastern Europe. My goal wasn’t to look at the McDonalds restaurants per se—they’re all pretty standard—but to look at the recent urban patterns that were developing around them.

Unfortunately, it was all too easy to find the places shown in the top series of photos.

I wasn’t aiming to pick on McDonalds restaurants per se—they are of course just one “indicator species” of a much wider “drive-through” pattern of consumption and settlement. As we can readily see from the examples, that pattern includes car dependence, limited walkability, fragmented low-density form, disposable packaging, heavy meat-eating (with the exception of the Indian restaurant, one supposes), and other high-consumption, high-emissions impacts.

Of course we would be wrong to focus too much on just the automobiles—or on just the meat, or any other single variable. The point is, we are observing a system, in which many factors interact and compound to produce a complex result.  That result includes a number of desirable or undesirable consequences—and often a mix of the two.  In this post, I am discussing the impacts on climate change, but of course I could also be discussing impacts to human health, or resource depletion, or any number of other interrelated factors.

In the case of climate change, the causes of greenhouse gas emissions are also multi-faceted.  For that reason it would be wrong to over-focus on just the tailpipe emissions from cars. We can’t overlook the embodied energy to make the cars, or the roads, or the buildings; the “operating energy” of infrastructure (water pumping and the like); the amount of energy used to heat and cool the buildings (which varies in part by density); the often higher transmission losses of lower-density development; or many other small factors that, in combination, have big impacts.  We have to take a “systems approach” to understand what’s going on.

Then there is the even slipperier—but no less important—question of consumption behavior. The McDonalds examples show intuitively how a “drive-through” lifestyle entails a lot of other patterns of consumption along with it. Again, driving is just the beginning of the story, and to that we have to add eating patterns (like convenient fast food with high meat content), shopping at convenient volume retail facilities, living farther away from work (because you can drive farther), buying a bigger house (because you can now “drive ‘til you qualify” for a bigger one), filling that bigger house with even more goods from the volume retailers, and so on.

The point is, this is a global inter-locking system, working as a kind of “operating system for growth.” We call it “sprawl” for shorthand—but as most of us recognize, it’s not just low-density development, but an entire inter-locking, now international system of physical and economic development. It includes all the economic practices, lending rules, engineering standards, zoning codes, and all the other “operating system” elements, at local, national and international scales.

It also includes a number of feedback reinforcements that tend to greatly magnify certain outcomes. For example, “drive ‘til you qualify” links bank lending rules, mortgage interest deduction laws, and transportation engineering practices, to reward exurban growth. This feedback reinforcement is great if you’re trying to sell more cars or houses or hamburgers—not so great if you’re trying to curb greenhouse gas emissions. (Or prevent a global financial crisis, which is what started in these same “drive ‘til you qualify” suburbs in 2008.)

The other important thing to note about this system, as most of us know but tend to forget, is that it didn’t just happen: it was planned. The system of sprawl, the current “operating system for growth,” was not the natural outcome of American consumer tastes or inevitable market evolution, as some mythology still holds. It was created consciously by businesspeople, politicians, architects and planners, for what seemed like good reasons at the time.  It was and is a choice, one that is now being made on a global scale, as the McDonalds examples show. And it was and is immensely profitable. Of course, the problem is that it is fundamentally unsustainable, and it incurs other catastrophic costs—like climate change.

This year’s devastating hurricanes, wildfires and record heat waves have certainly brought into focus the catastrophic potential of future climate change events. It is tempting to look for actions that we can focus on immediately, particularly when we feel powerless to affect the titanic long-term forces of the global economy. In that sense, the tendency to focus on adaptation actions (like flood protection, shade structures and the like) is understandable, and they are certainly reasonable actions to take in their context.

But we can be guilty of too much single-variable thinking with adaptation, just as we can with any other single factor. Of course adaptation will do little good if the effects of climate change become so catastrophic that they overwhelm our other efforts—if, say, we build a sea wall, only to find that we are suffering from a catastrophic drought and crop failure instead. Then we are in danger of becoming like the children who play the Whack-a-Mole game, whacking one mole down only to see another pop up in an unexpected location.

That is the danger of single-variable thinking. While adaptation may be necessary and appropriate (I certainly think it is), it may not be adequate, as a way of responding effectively to the challenges of the future.

The same danger of single-variable thinking applies to climate change overall. We must remember that if we were able to “solve” climate change tomorrow, we would still have grave challenges of resource depletion, ecological destruction, contamination, and other aspects of an unsustainable civilization to contend with. We cannot deal with any of these challenges, except as “joined-up” problems.

One might think the same is true for sprawl, and in a sense it is. Yet as we discussed, sprawl is not one thing, but an inter-locking system, and one that was created consciously for what seemed to be good reasons at the time—more prosperity, more convenience, more efficiency. Now we know the hidden costs, and the unsustainability of this now-global enterprise.

We also know something else very important. As I pointed out, this system was created by choice—and we now have other choices. We have the option of a truly more urban model—with more transportation choices, more diversity and mix of uses, more walkable streets and public spaces, and more vitality and “critical mass.”  Those things are all very good for climate change—and the other challenges we have discussed. (As my research showed, they help to explain why cities like Stockholm have much lower greenhouse gas emissions per person than American cities—by multiples of 3 or more.) 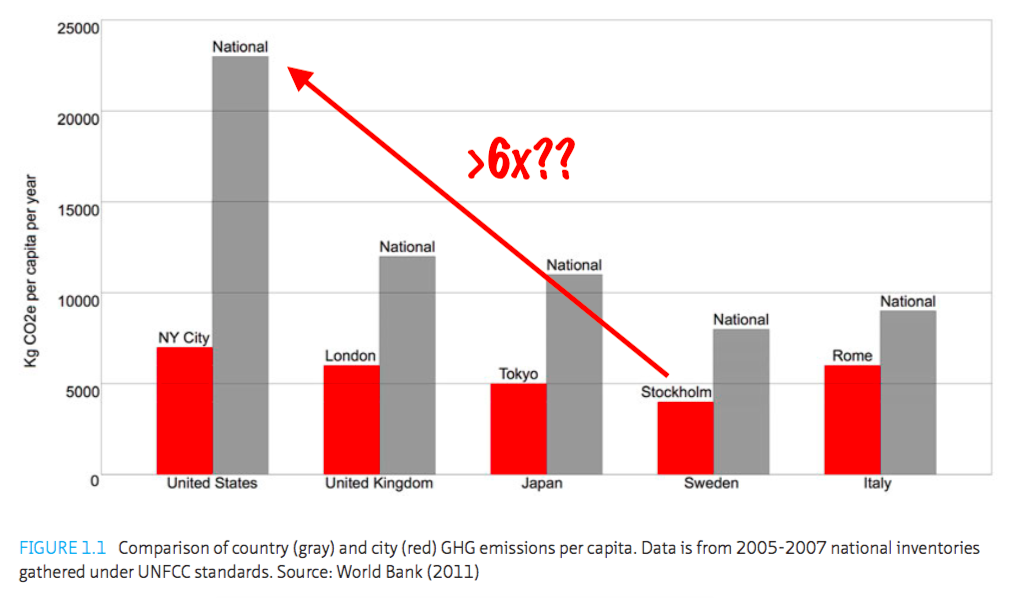 But as the members of the CNU know very well, saying we want more true urbanism is not the same as producing it. To get anywhere, even locally, we actually have to take on this massive “operating system for growth,” and go through its codes line by line—street standards, fire standards, zoning codes, bank lending rules, incentives and disincentives, tax policies, and so on. (My own interests lately have focused on economic incentives, land value tax, and other so-called “Georgist” reforms.)  We have to focus locally, but we have to see the aspects that are national (like US mortgage interest deductions) and international (like global capital markets and their incentives).

We now have a historic opportunity before us.  Last year, all 193 member states of the United Nations adopted by consensus the “New Urban Agenda” – a policy document that enshrines in international policy the reform model of mixed use, mixed mode, compact and walkable urbanism.  That document also makes the explicit connection to greenhouse gas reductions, and other ways of fighting climate change through reducing sprawl (including both adaptation and mitigation).  It also links to other sustainable development goals, which were also adopted by the General Assembly the year before.

Joined-up problems require joined-up responses, and so we now have the opportunity to join up with UN-Habitat, and with many other organizations around the world.  This year’s “Climate Summit” was an important start in a larger response, bringing the CNU together with a number of allied organizations.  While others might focus on renewable energy, ecosystems restoration, and related reforms, there is an urgent need for us to champion urbanism – to be “the urbanists in the room.”  We can join with others who believe that urbanism, as an alternative to sprawl, is the most important reform we can bring about, to combat climate change and to meet other challenges of the future as well.

For my own part, I have been working closely with a number of international partners, including UN-Habitat and others who are seeking to implement the New Urban Agenda.  Our Future of Places forum, a partnership of UN-Habitat, Project for Public Spaces, and Ax:son Johnson Foundation, brought together a number of New Urbanists and others to help to shape the text of the New Urban Agenda. Now that this is done, we are working through a new research center focused on implementation, the Centre for the Future of Places at KTH University in Stockholm, and we look forward to working further with the CNU and other American allies.

The United States was, unfortunately, the post-WWII birthplace of the global phenomenon of sprawl, and is still a major exporter.  So it is not surprising that the CNU, as a US-based organization, has done some of the most advanced work in reforming this system.  The CNU can offer its considerable technical expertise, working with other allies who may be more advanced in other respects.  We need not be apologetic about our own mixed national history, nor should we be arrogant in our own international power and influence.  Rather, we can continue to champion, and to offer concrete, effective steps toward, a new generation of more vibrant, livable, sustainable human settlements.