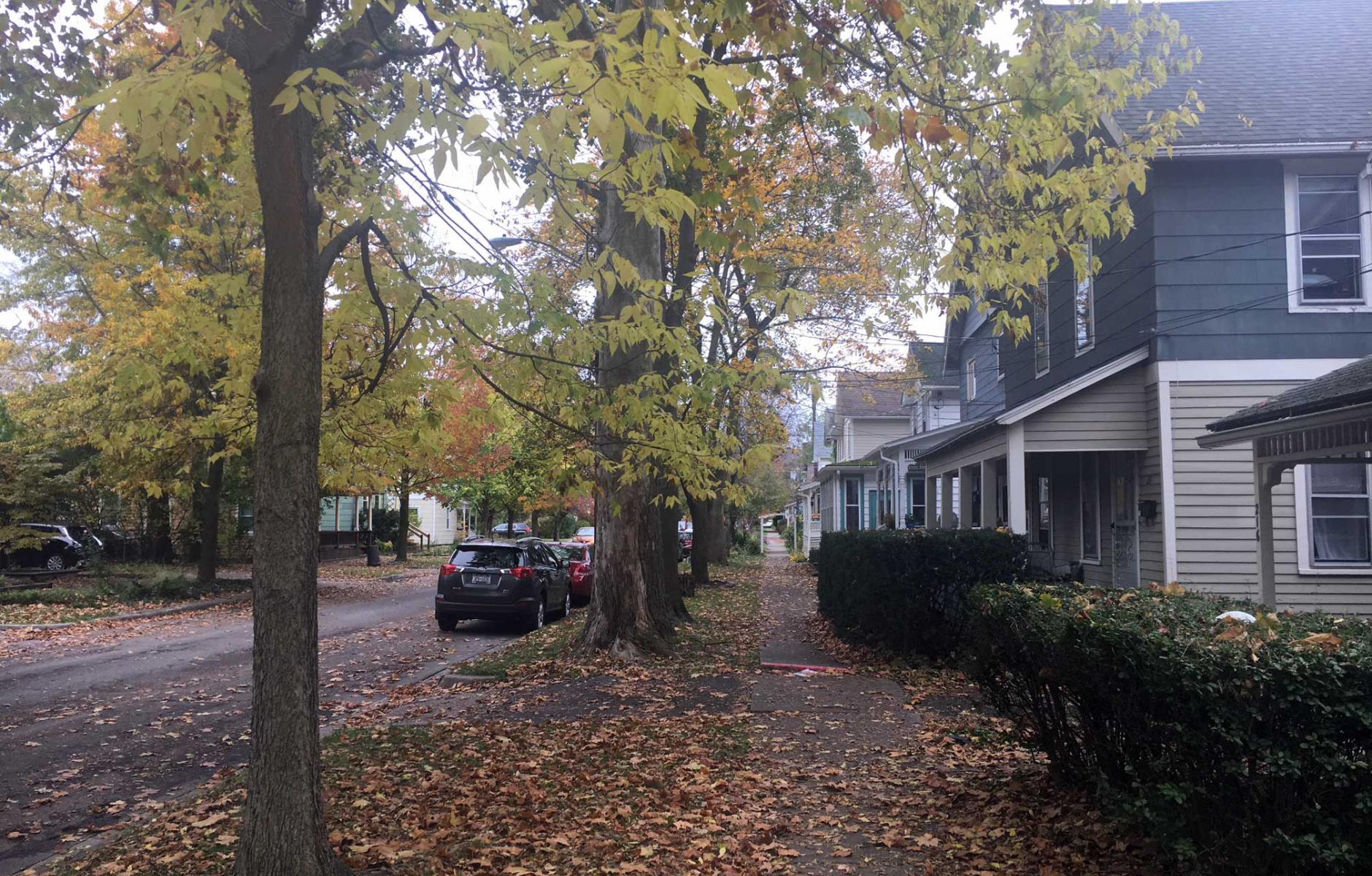 The 200 block of Utica St. in Ithaca, NY
Community

Critical data points for my street

One gaggle of girls, 270-plus trick-or-treaters, 20 pies, and one streetwise cat are vital statistics for this urban thoroughfare.
ROBERT STEUTEVILLE   &nbspNOV. 7, 2017

Last week NACTO (National Association of City Transportation Officials) released a report that said data is key to the function of streets, now and in the future. Data may be more important, NACTO says, than pavement itself:

Data is replacing concrete, asphalt and steel as the foundation of 21st Century urban transportation planning and management. … Billions of detailed, street-level data points are collected in real time daily on everything from traffic speeds and volumes to travel patterns and transit use. The data is vital to the operations and management of streets, regardless of the entity generating them.

I live on an urban thoroughfare called Utica Street in Ithaca, New York, that is six blocks long. I'm not sure how much data is collected on Utica Street to date. For one thing, Uber and Lyft are illegal in Upstate New York. Here's my contribution to the billions of data points that will be absolutely vital for proper operations and maintenance of Utica Street in the near future, if not today.

• There is one cat, Simon, who lives across the street and uses the crosswalk, looking both ways. There are other cats and dogs living on the street, but I haven't counted them and they don't usually cross at crosswalks.

• The house next door has three children, our house has two, and there's one child two doors down. The two houses across the street have a total of three children. At the corner as many as five children regularly gather on nice days and play informally, often building forts on the large boulevard strip between the sidewalk and the street. Two rope swings are tied to trees near the corner.

• Two portable basketball hoops are set up on Utica Street, both short of the 10-foot regulation height. In years past, there have been as many as four hoops. One time somebody drew a handball court on the street in chalk. My daughters and I used to play frisbee on the street, hitting at least two or three cars in the process, and we hoped that not one car owner saw it happen.

• On Porchfest, our block has at least five musical acts performing, two at our house. I have been performing a duet with my daughter for the last  five years. Our porch, at 55 inches high, is a little too far off the ground for performing, so we come down to the edge of the sidewalk. The concept of Porchfest was created in our neighborhood in 2007 and has now spread to about 100 cities and towns across the US.

• Too many musicians live along our street to count. Last night, on a walk, I heard a French horn on the next block. My daughter, Robin, who has very sharp hearing, swears she heard a full brass band playing classical music two nights ago at midnight. I heard something too, but I couldn't tell exactly what I was listening to.

• Our street is sandwiched between a "bicycle boulevard" and a street with bicycle lanes in both directions. I much prefer cycling on Utica Street, which has zero bicycle facilities, because cars go slower and traffic is lighter.

• How fast do cars go? I usually drive under 20 mph, and that's about the upper limit. The official speed limit is 30 mph. There's only room for one car passing at a time, so cars pull over in the on-street parking gaps.

• The street is 26 feet wide, with parking on both sides. That leaves about 12 feet between cars for two-way traffic.

• Twenty-six feet is not too far to have a conversation with a neighbor across the street in a fairly normal speaking voice. The last street we lived on is 36 feet wide, and the extra 10 feet means that someone would have to cross the street to talk. We rarely had those conversations.

• About 42 percent of residents of Utica Street walk to work, if Utica is representative of the city as a whole.

• One block party is held annually, in August, when about 20 pies are entered into a contest. One baker wins the contest each year.

• One gaggle of teenage girls walks down the street each morning, heading for middle school, which is 1.2 miles away.

• People on our street meet by chance at Wegman's at least once a day.

• One drugstore and one park are each one block away, and one coffee shop is a block and a half away. The coffee shop has five outdoor tables except in winter, when the piles of snow are sometimes more than two feet high.

• In six years of living on the street, I am aware of no injury automobile crashes. My daughter, learning to drive last year, backed into a parked car, causing zero damage.

• We bought 270 decent-sized pieces of Halloween candy at Wegman's, but we ran out of candy by 7:30 pm, even though we limited each trick-or-treater to one piece.

The last data point is absolutely critical if you plan on moving to Utica Street before next Halloween. Be prepared!