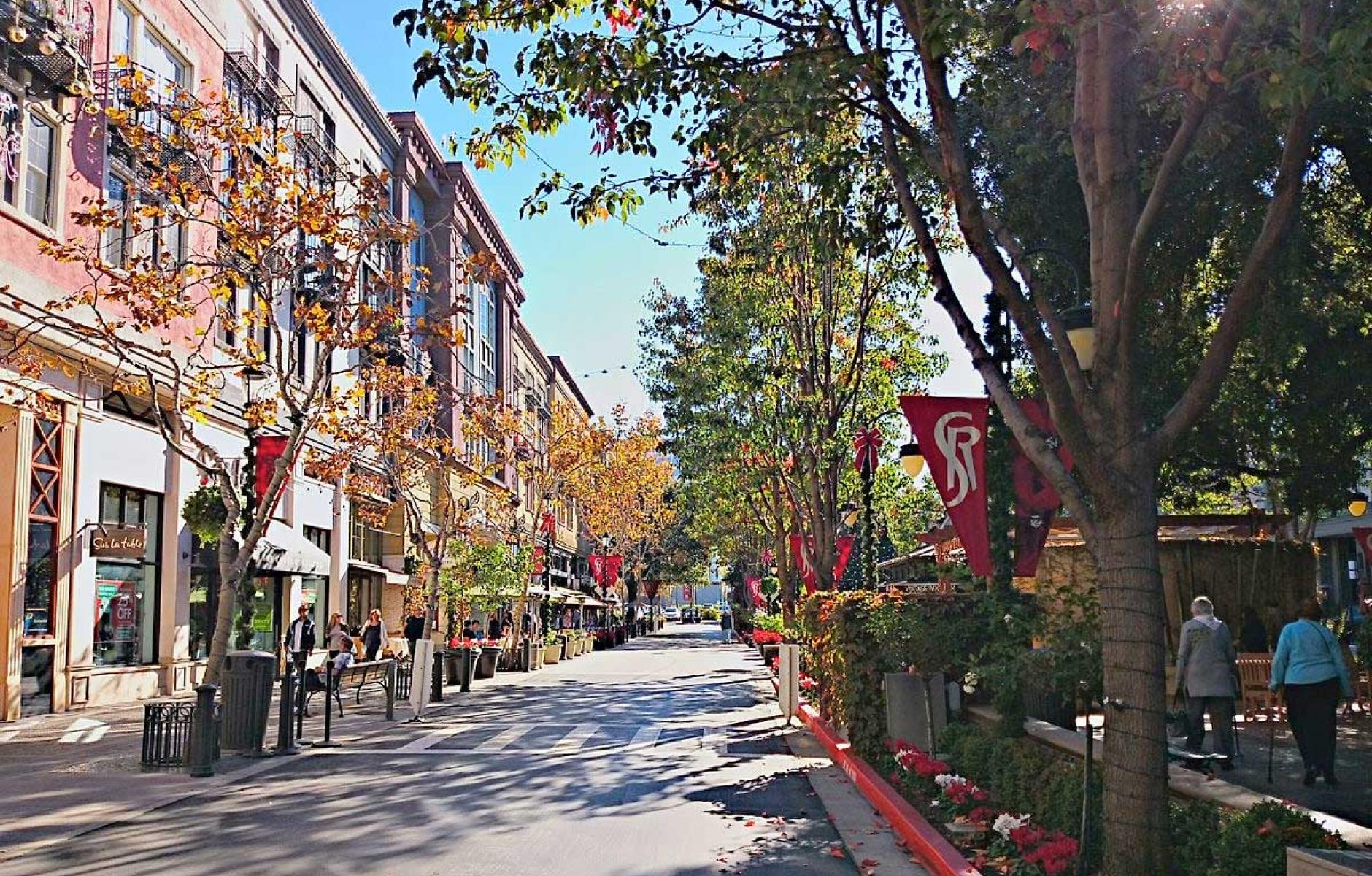 Genuine change or lipstick on a pig?

A well-known new urban project has begun to reshape the relentless sprawl around it, but communities shouldn't wait for that to happen.
ROBERT STEUTEVILLE   &nbspSEP. 19, 2017

A criticism of Silicon Valley planning, housing, and community culture led to a critique last week of Santana Row, a prominent new urbanist development in San Jose, California. Santana Row is better than the usual Silicon Valley sprawl, but does it represent real progress—or is it merely dressing up a mess of disconnected development?

CityLab writer and Bay Area resident Daniel Harris called out Silicon Valley for, among other shortcomings, its “soul-crushing, NIMBY-inducing, place-agnostic sprawl.” Harris also had this to say about the large-scale new urban project: “At our best, Silicon Valley can produce the likes of Santana Row, a mixed-used development in San Jose. ‘The Row,’ the offspring of a one-night stand between a European city and an airport duty-free store, offers an al fresco pedestrian treadmill where visitors can window-shop and stroll in circles—constrained on all sides by parking lots, malls, and an eight-lane road. This, like other developments scattered across our suburbs, may boast a ‘Live, Work, Play’ lifestyle, but the reality is more in line with ‘Commute, Work, Netflix.’ ”

I like Harris’s turn of phrase, but is he on the mark? Silicon Valley is largely developed in the form of conventional suburban development (CSD). San Jose, where Harris works, has grown by more than 10 times in population since 1950. About 90 percent of that city was built like the majority of America during this time period. Subdivisions and shopping centers branch off of large arterial roads geared to automobiles—a sameness of character that one can find from San Jose to Dallas to Virginia Beach.

The tech industry did not create sprawl. It accelerated sprawl by creating hundreds of thousands of high-paying jobs that kicked housing demand into overdrive. But CSD was formed by, among other factors, government-adopted zoning codes and publicly built road systems that funnel traffic from housing and shopping pods onto large, wide thoroughfares.

Santana Row faces two such thoroughfares—Stevens Creek and Winchester boulevards. The developer of Santana Row, Federal Realty, is not at fault for the arterials or the surrounding land uses, which go on for miles. The CSD was established long before Santana Row got off the ground in the early 2000s, and Federal Realty could not have changed the basic context. To their credit, Federal Realty decided to build something different (see photo at top, compared to the photo below).

But the questions remain—to what extent is Santana Row an improvement? And is it causing a positive impact beyond its borders?

The questions are critical, because new urbanists aim to influence the broader world—not just build isolated islands of urbanism. New urbanists have pursued that goal in many ways—from form-based codes that have been adopted by hundreds of municipalities to manuals like Designing Walkable Urban Thoroughfares and to influencing the “complete streets” movement. The reality is that new urbanists have made far less impact on transportation engineering than they would like. Practices in that field are slow to change even though the research has long demonstrated that small blocks and connected streets networks are safer in general—as are narrower travel lanes.

Santana Row is a big improvement over the strip mall that occupied the site before. Residents of the area get a very limited urban experience in Santana Row—but that experience is the only one available for three miles, until you get to downtown San Jose. Unlike the strip mall it replaced, Santana Row includes more than 800 housing units on the 42-acre site, in a region that is severely short of housing. The housing is not very affordable, mind you—but it does fill a need on a site that had none.

Yet is Santana Row having a positive impact on surrounding sites? The answer is yes, more so than most similar projects, according to Ellen Dunham-Jones of Georgia Tech, one of the nation’s foremost experts on suburban retrofit.

There are two predominant ways to create good urbanism on an automobile-oriented arterial, she explains. The first is to build a walkable main street one block away. That pattern tends to reinforce the drive-only character of the arterial by placing parking lots and parking structures on that thoroughfare. The other way, employed by Santana Row, is to create a perpendicular main street, which at least allows for the possibility of connecting across the arterial. Santana Row, “urbanized” its big box stores by building them up to the sidewalk of the major arterial and having them turn the corner onto the main street, she explains.

Santana Row has had several expansions since opening, broadening the walkable area. “Urban housing has been built on two more blocks of surface parking lots on its eastern flank. Urban office has been built on a large surface lot to the southwest, adjacent to the movie theater, and new office space was built on top of a parking deck immediately south of the theater. The big expansion now involves the construction of way more office across Winchester Boulevard.”

That is a big deal, Dunham-Jones says, because “Having created an attractive urban seed, Federal Realty is now leveraging it for high office rents in an area (Silicon Valley) where that’s very rare.” In doing so, the developer is reinforcing connections across at least one of the arterial roads. On the public sector side, she notes that since the project’s success the city has designated Santana Row and the Valley Fair Mall across Stevens Creek Boulevard for higher density. There is a Winchester “corridor plan” underway and new Bus Rapid Transit on Stevens Creek planned now that the mall and several nearby properties are expanding or redeveloping, including the recently approved plan for retrofitting properties along the next three miles west of Santana Row into Stevens Creek Urban Village.

In addition to seeding these changes in its immediate context, Santana Row also proved the market for mixed-use, walkable development in the area—and this may have contributed to the revitalization of the city’s downtown several miles away, she says.

Santana Row’s impact has really taken off now that the community itself has taken the initiative to do more. It has taken San Jose a decade and a half to leverage the impact of Santana Row, and therein is a lesson for municipalities.

Expecting a developer to solve a thoroughfare or context problem that exists at a far larger scale than the development site is unrealistic. The developer has no leverage to change the culture of an institution like the local, state, or federal Department of Transportation. Even if DOTs would be willing to change, politics are involved. By taking the lead in transforming a major thoroughfare, the developer risks additional opposition to their project. There might be good reasons for a developer to attempt that—and I hope they do—but the developer would be crazy to try it without strong support from local leaders.

The community that wants to see a major thoroughfare transformed but waits for a heroic developer to solve the problem is even crazier.

And maybe that’s the point that Harris was making in CityLab. The people of Silicon Valley have to take responsibility for the kinds of cities and towns they are building, and the impact on diverse residents and their children’s future.