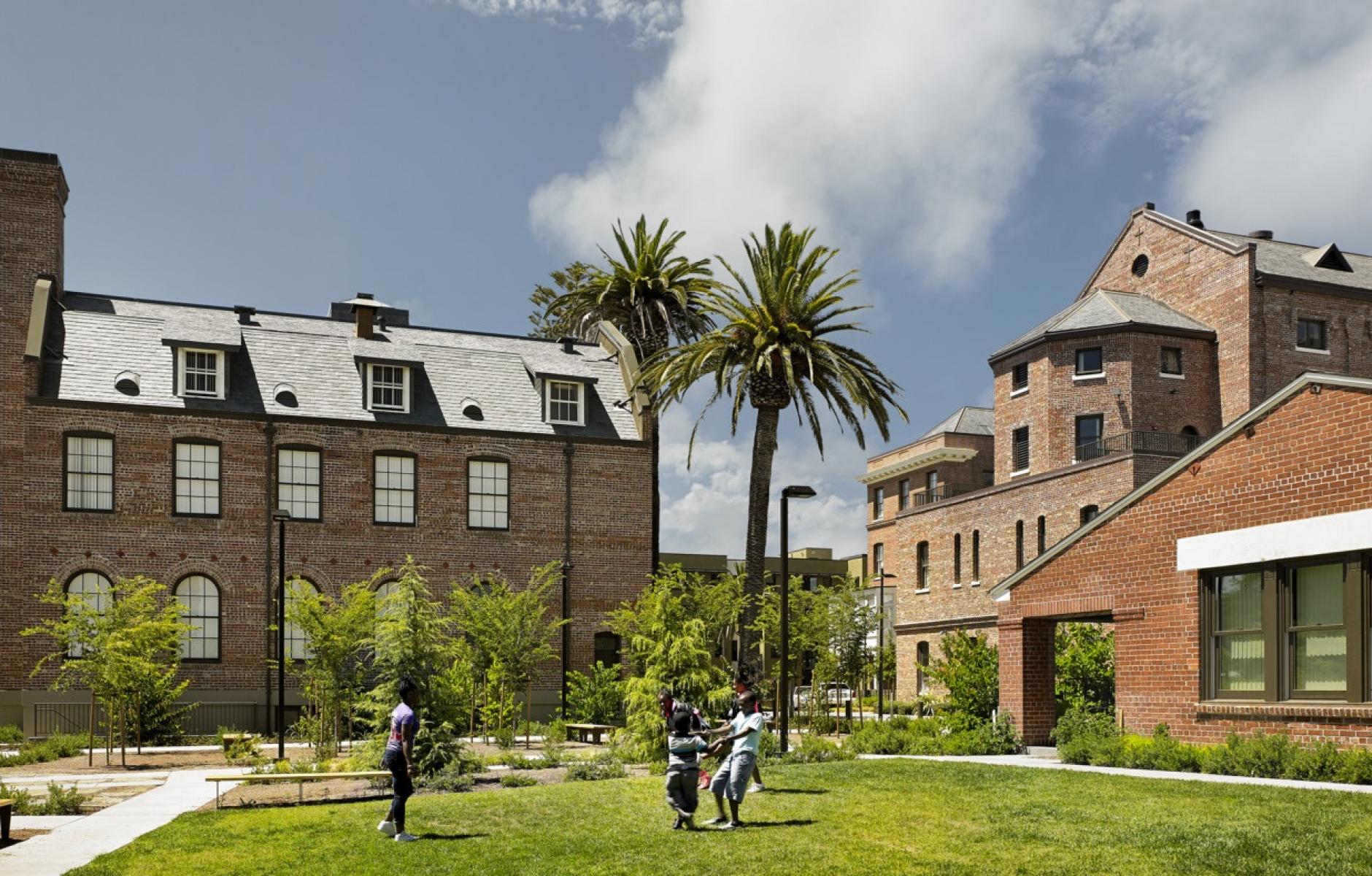 A rare combination of National Historic Landmark buildings and infill a fordable housing, the St. Joseph’s Redevelopment transforms a dilapidated former convent and convalescent home into a mixed-use asset for a distressed Oakland, California, neighborhood.

The physical pattern of St. Joseph's, the way it connects to and improves the neighborhood, supports affordable housing and revitalization.

The unique character of St. Joseph’s provides a strong sense of place in the city's Fruitvale area. Five historic buildings, dramatic trees, and the rumble of the nearby trains contribute to a cohesively designed site that includes new construction, landscaping, and restoration. The neighborhood thoroughfares surrounding the 3.3-acre block are vastly improved, with new entrances, new uses, and more people ofering “eyes on the street” at all hours of the day.

St. Joseph’s was built in the early 20th Century as a small campus of well constructed Georgian Revival buildings surrounded by a perimeter masonry wall. When the facility was reused for offices in the 1970s, the design was compromised: The main entry stairs were torn down and the entire site—excluding buildings—was paved for parking. Streets became automobile oriented and lifeless while the offices sat inactive at nights and on weekends.

The main building was healed with a rebuilt entrance. The resilience of the historic structures is proven by their a fordable regeneration into new and unexpected uses. This is exemplified by the small, freestanding, brick guardhouse—which was converted into an art room next to the children’s play area.

The new building architecture is purposefully understated. A simple massing with punched openings neither conflicts with nor detracts from the historic structures. The design preserves views of, and lines up with, historic buildings. The scale is modulated with entries, modest balconies, simple cornice lines, and enough rhythm and variety to capture the interest of passersby.

The old perimeter wall has also been restored, sometimes even forming the base of new buildings. It becomes a unifying element to the design—but never a barrier to the surrounding neighborhood.

“This ground-breaking development is expected to trigger redevelopment in the community while also providing a fordable housing for seniors and the families who will reside in this transformative, multigenerational housing campus,” says US Rep. Barbara Lee, congresswoman from Oakland.