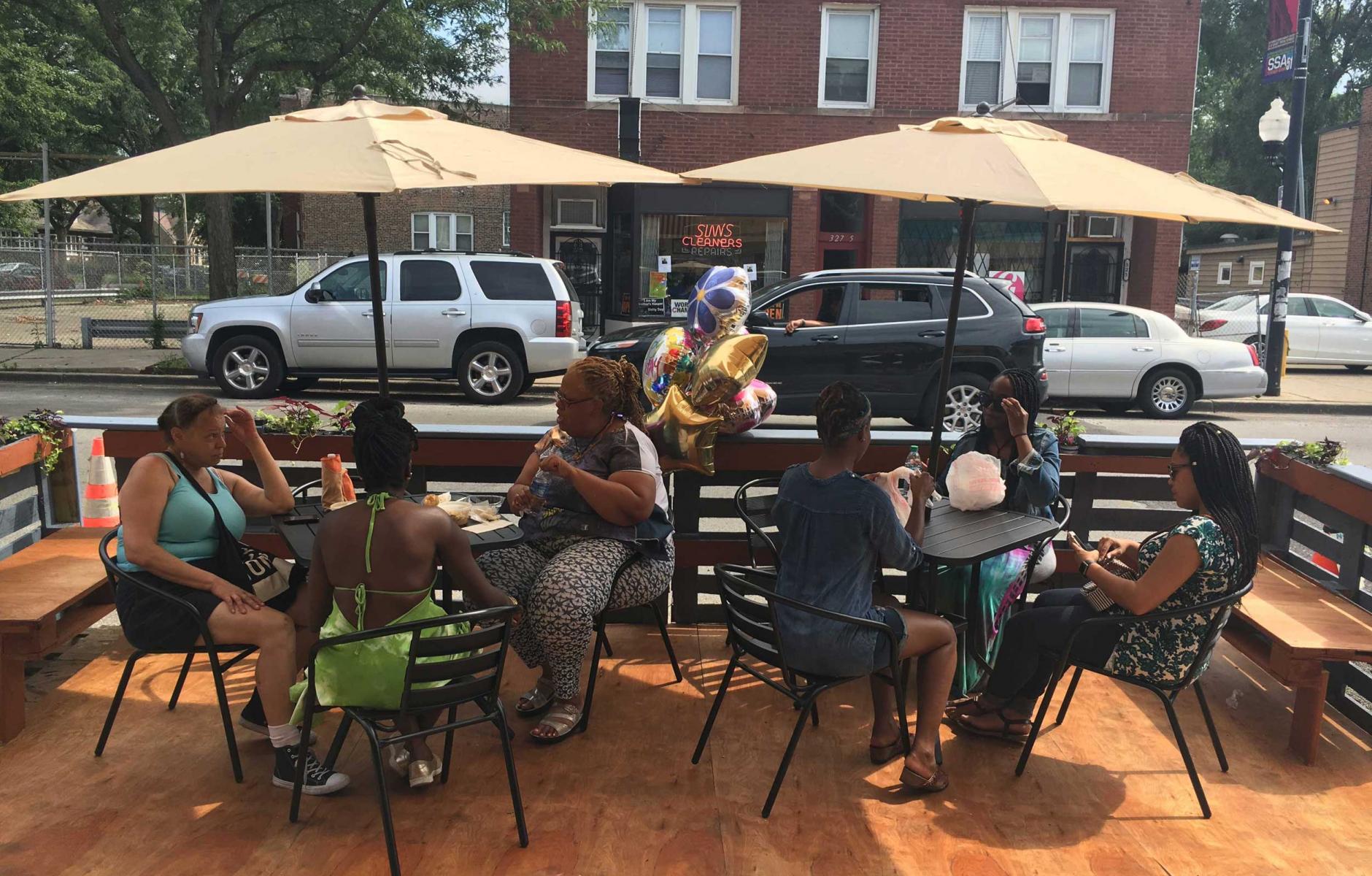 How urbanism can bring hope and change to a working-class African American neighborhood.
ROBERT STEUTEVILLE   &nbspAUG. 16, 2017

Temporary parklets and outdoor cafes have recently boosted sales and street life on three blocks of a working-class African American community on the Southside of Chicago.

The tactical public spaces in front of businesses on 75th Street in Chatham, set up for a long weekend starting July 20, were extended through Labor Day by the city of Chicago at the request of business owners.

Some visitors describe a new "vibe" in the area akin to more prosperous neighborhoods in the Northside of Chicago—or in other cities like DC. The new seating areas give community members a reason to hang out on a commercial street that boasts a long history and good "bones" of a walkable urban place. "There's tons of potential in this area—it was a beautiful neighborhood in the 1990s," noted one commenter among hundreds who used the seating areas during the first weekend.

The Congress for the New Urbanism (CNU) and Farr Associates, in partnership with the city and the Greater Chatham Initiative (GCI), organized the parklets, cafes, and activities, including community visioning. The effort is part of a CNU Legacy Project, where CNU works to empower local leaders, advocates, and residents to implement New Urbanist principles and build thriving places.

The Chatham project was funded with a $2,500 grant from the Driehaus Foundation, based in Chicago, matched by $2,500 from GCI. CNU approached the city and solicited the help of Chicago-based Farr Associates for design and implementation. The event was branded "Dining on the 5." It takes advantage of the transformative effect that outdoor seating can have on a main street.

Stephanie Hart, owner of Brown Sugar Bakery, sees more children and families enjoying the street as a result of the parklets, which extend beyond the curb and take up one parking space. "It has raised the level of awareness of what is possible in the community, which I am doing back-flips about," she says. "People stop me in other places and say they were on 75th Street and how vibrant it looks because of the seating and flowers."

As Hart was talking, a nursery school class sat down to have their lunch. "I never saw this class walk this street before," she says.

Business at Brown Sugar Bakery increased 25 to 30 percent on the first weekend, and 12 percent since. "That's pretty amazing. The reason people have outdoor cafes is that they generate money." Hart intends to make outdoor seating permanent and petition the city to continue the parklets next year.

"The biggest measure of success was the businesses came together and asked for extension," says Aly Andrews, project manager for Farr Associates, which is working pro-bono. Five parklets transformed three blocks and they calm traffic also, she says.

Outdoor seatings areas are step one of a revitalization strategy that Farr Associates calls TLC, standing for Tactical, Lean, and Climax. The tactical step is temporary, testing the potential for urbanism to transform an area. Step two, Lean, includes design guidelines for facades on 75th and 79th streets (another commercial street in Chatham), repair of facades, and continuation of outdoor seating. Step three, Climax, envisions redevelopment of vacant lots on the corridors—informed by the design guidelines.

One goal of the Chatham project is to formalize techniques for doing similar tactical projects elsewhere in Chicago, allowing neighborhoods to bring street life to struggling main streets.

Chatham is eight miles and a world away, economically and culturally, from The Chicago Loop. But 75th Street has a concentration of small businesses that have survived through hard times.

One of 77 community areas in Chicago and with a population 31,000, Chatham retains relatively strong homeownership, a working class culture, and a large number of black-owned businesses. The median household income has fallen in the last quarter century and now stands at $32,057—about 38 percent below the national average. Chatham has suffered from crime and disinvestment, yet its population did not drop as precipitously as other community areas with similar demographics.

Dining on the 5 has faced some challenges. On the first night, a bar dispute spilled out on the street and shots were fired after midnight. A number of residents were initially suspicious of the parklets and worried that they might bring outsiders into Chatham. "Some told me they felt as though they were visitors in their own community and neighborhood," says Juantiki Jones of CNU.

Hart says the gunshots had nothing to do with the parklets, and she pointed out that a similar incident occurred two weeks before this project began. "If we occupy our street, the less lawbreakers will occupy our street. I think we focus on the fact that no more more problems have occurred, so that was an isolated incident."

Hart hopes that the vibrancy on the street will attract more businesses that want to locate in active, thriving places. "I am so glad that we had the opportunity to test this out. I plan on investing in outdoor seating, plan on outdoor events, along with some of the other businesses," she says.