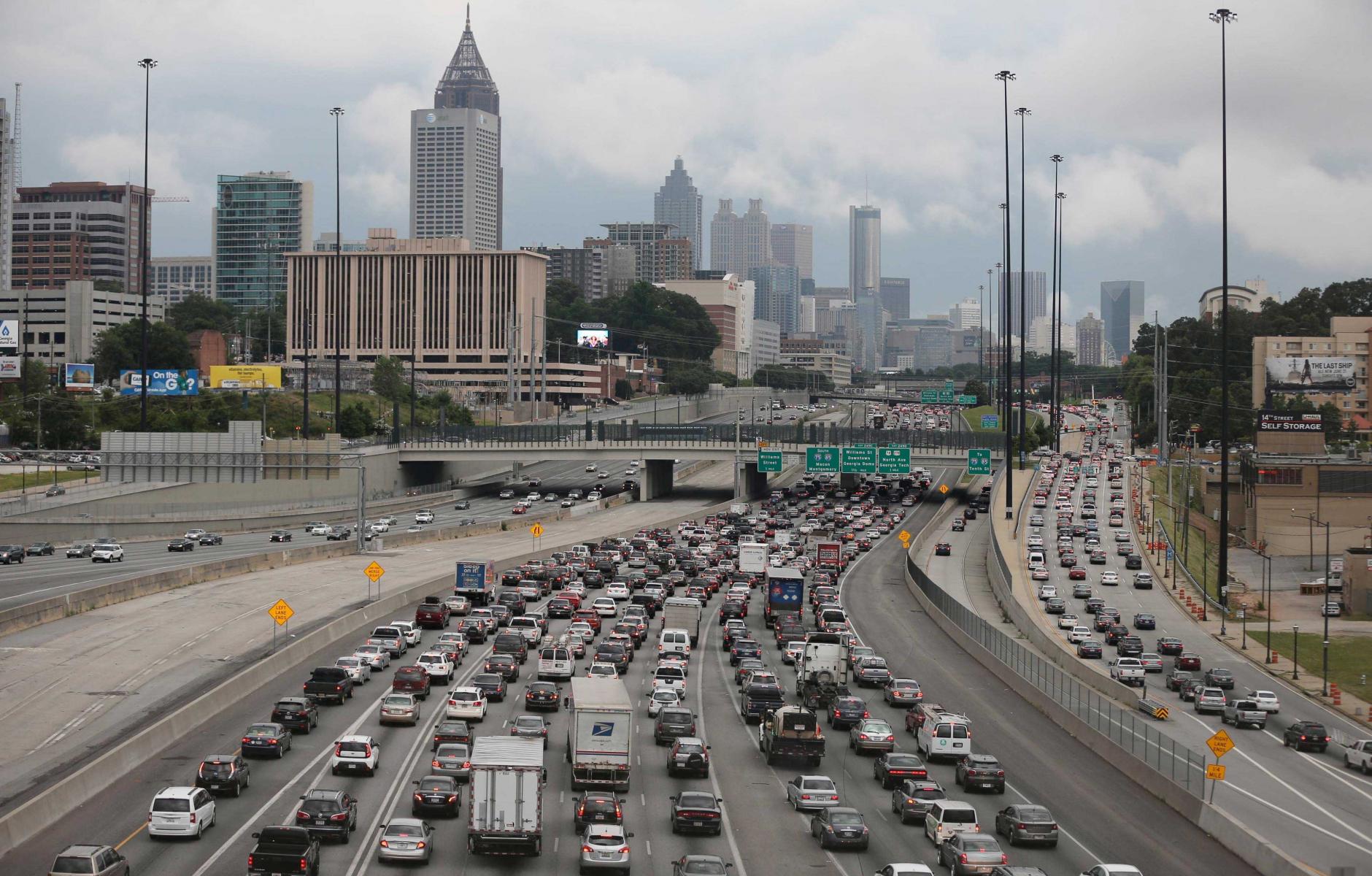 Why urban freeway expansion is futile

Everyone hates freeway traffic congestion. Highway engineers promise to fix this problem by widening freeways and building new ones. For the past 80 years, engineers have been promising that the next round of freeway expansion will solve the problems. This has never worked. A few of the many examples where this has failed are presented in the table below. 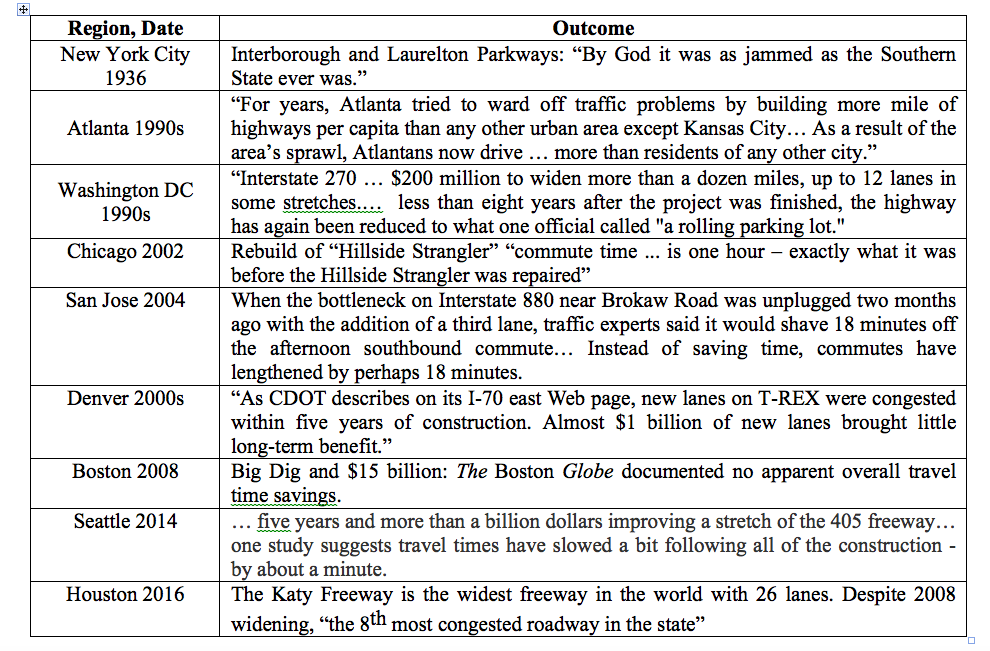 In fact, additional freeway capacity cannot solve traffic congestion. In 1992 Anthony Downs coined the term triple convergence in his book Stuck in Traffic: Coping with Peak-Hour Traffic Congestion. Triple convergence describes how peak period traffic congestion is inevitable because drivers will compensate for capacity increases by (a) shifting routes, (b) shifting time of travel, and (c) shifting travel mode. After capacity expansion, the new equilibrium will be just as congested as the old equilibrium.

Downs writes that drivers will choose “limited-access roads that are faster than local streets if they are not congested,” but the attractiveness of such routes will cause them to become congested “to the point where they have no advantage over the alternate routes.” This means that freeways posted at 55 mph or higher will instead operate at the same average speeds as local streets during peak travel periods. We call many of these roads “Interstate Highways” but very little peak period traffic on these roads is long-distance travel. Most of the traffic is from residents making routine daily trips. Adding freeway capacity sucks more of these local travelers onto the freeways. It does not reduce congestion.

Freeway congestion is not uniform but instead is focused at and behind bottlenecks. Many of these bottlenecks recur daily, with common locations including backups behind on-ramps, ahead of on-ramps, in merge and weave areas, and in lane drops. Driving on the freeway system during peak periods typically includes experiencing multiple bottlenecks. If congestion is not too severe, traffic moves relatively smoothly in stretches – until the next bottleneck is reached.

Those who drive daily in congested conditions have very complex mental models of freeway congestion. We consider the bottleneck locations and estimate delays behind these bottlenecks based on the day of the week, the time of day, the weather, and special events. We also consider uncertainty. For example, if we get on the freeway and congestion is worse than usual, there could be a very long delay. To avoid this risk, we might instead use a non-freeway route. In addition to our mental models, many also are now using Google Maps and other GPS apps to help plan routes based on real-time traffic data.

Given the sophistication of our mental models and real-time traffic apps, it will be very surprising to most that the computer models relied on by highway engineers for freeway planning are much more simplistic and wrong. Despite enormous advances in computer hardware and software, highway engineers are still relying on a 50-year-old algorithm called Static Traffic Assignment (STA). STA does not consider bottlenecks at all. Instead, it tries to estimate congestion delay by estimating delays for each road segment separately and adding them together.

STA does not work for congested freeways. For example, I-35 in central Austin, Texas, is one of the most congested in the US. For northbound traffic in the peak period on a weekday afternoon, STA estimates over twice the actual traffic throughput counted, and a speed of 39 mph—almost twice the 20 mph actual average speed. STA overestimates traffic throughput because it does not properly constrain traffic at bottlenecks. It underestimates delay because it does not account for traffic backup delays behind bottlenecks. These STA problems are present in every region in the US.

It is incredible that STA does not constrain throughput to capacity. When highway engineers talk about how a certain freeway will have traffic volumes 20 percent over capacity (or more) in 20 years if the roadway is not widened, they are talking nonsense based on STA. In the real world, future traffic volumes cannot exceed capacity. That is what “capacity” means – the traffic volume that cannot be exceeded. Sometimes when it is pointed out that future traffic volumes cannot exceed ultimate capacity, the numbers are reframed as “demand” or “latent demand.” This is wrong. As economists tell us, there is no absolute “demand;” instead demand is a function of supply.

There is a much more sophisticated algorithm called Dynamic Traffic Assignment (DTA). DTA properly models bottlenecks and delays behind bottlenecks. It does not allow traffic volumes to exceed capacity. DTA should replace STA in all freeway planning work. (For more information about DTA see my paper, Realistic Analysis of Urban Freeway Expansion and Downsizing.)

STA and DTA lead to completely different conclusions about freeway expansion. The Arkansas Highway and Transportation Department is proposing that the 6-lane I-30 bridge over the Arkansas River between Little Rock and North Little Rock be replaced with a 12-lane bridge. In addition to I-30, there also are 2 4-lane street bridges within a mile of I-30 and 2 6-lane beltway bridges in the region.

In contrast, STA shows significant traffic growth in peak direction, peak hour traffic on I-30 whether the bridge is expanded or not because it fails to constrain traffic volumes to capacity. This exaggerated traffic throughput in the 2040 No Build alternative translates into extreme congestion. This unrealistic congestion can then be mitigated in STA by widening I-30. STA alone produces false benefits, but STA + microsimulation is even worse. The model was fed traffic volumes 20 percent over capacity, and ridiculously long delays are calculated.

The information presented above is very relevant to freeway downsizing. Some cities have already successfully removed freeway capacity without increasing congestion by replacing highways with surface streets like boulevards. Many in other cities would like to follow suit, but are told by highway engineers that this is not possible.

In the Little Rock region, advocates have proposed replacing I-30 with a 6-lane boulevard and constructing another 4-lane street bridge. Analysis with DTA shows that this alternative would provide adequate capacity, and would not increase regional congestion. 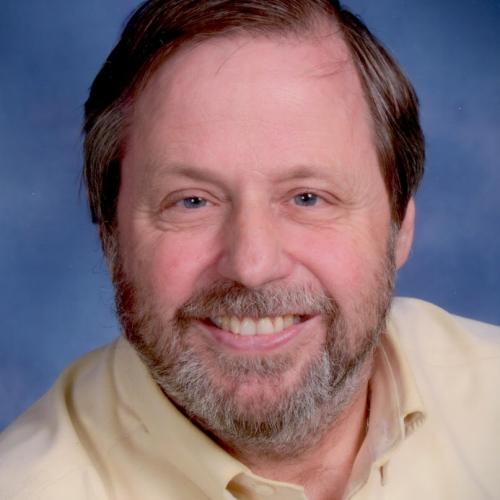