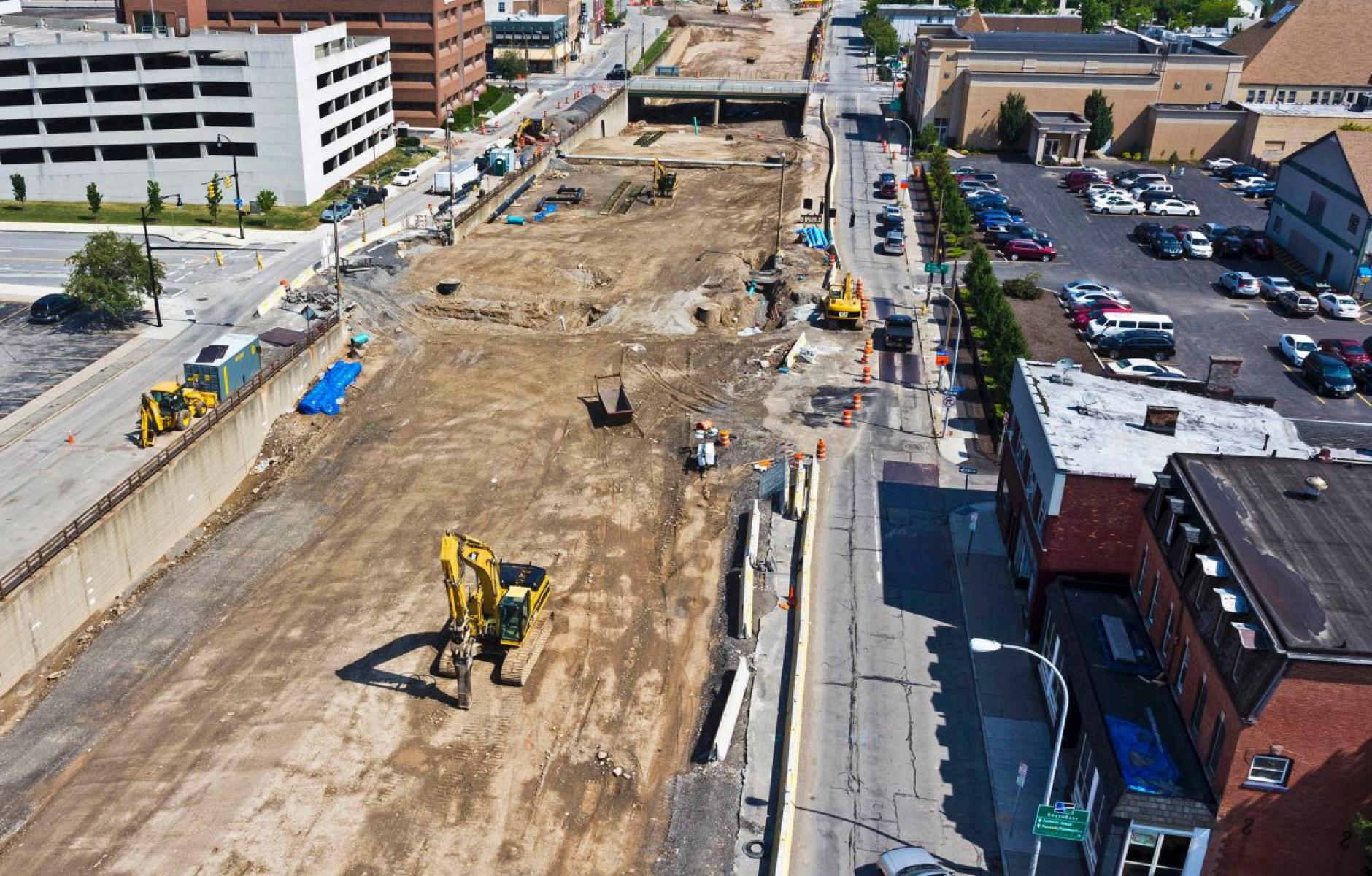 The noose around Rochester's downtown has been partly removed, breathing oxygen into the repopulation of the city center.
ROBERT STEUTEVILLE   &nbspJUL. 6, 2017

First completed in 1965, the Inner Loop of Rochester, New York, was designed to wrap like a noose around downtown. Combined with the rolling demolition of urban renewal, the Inner Loop served to lure and siphon residents out of the city center—and Rochester’s downtown population plummeted. “We built an evacuation route,” jokes Rochester City Engineer James McIntosh. “It worked. Everybody evacuated.”

In the past decade, however, downtown Rochester has staged a dramatic comeback. Business and retail activity has returned to the city, and its downtown population is expected to rise more than 400 percent by 2020, to a population of about 10,000. The partial removal of the Inner Loop has helped drive that renaissance.

In late June 2017 City Council approved the sale of a 1.3-acre parcel of land along the former highway segment for mixed-use development including 120 units of housing. Twenty housing projects are in the works downtown and many more developers are interested, according to the Rochester Downtown Development Corporation.

With community support and funding assistance via a USDOT TIGER grant, a one-mile segment of the Inner Loop was filled in is being rebuilt as a walkable, multimodal at-grade boulevard. While the original highway boasted twelve travel lanes despite only carrying 6,000 vehicles per day, the replacement boulevard design will require only three lanes of space—plus on-street parking, sidewalks, and green space. The Inner Loop made CNU's Freeways Without Futures 2017 list.

While other cities have removed elevated and surface highways, Rochester may be the first to fill in a below-grade highway, according to The New York Times. As part of the Inner Loop conversion project, north-south streets are being reconnected for two-way traffic for the first time in more than 50 years. In effect, the project has reopened downtown for residents of Rochester’s neighborhoods.

Thanks to the project, six acres of government-owned land, and more private land, is available for redevelopment. Every parcel has a developer on board, with a mix of residential, retail, commercial, and civic uses planned. One large residential project has already completed its first phase, featuring 70 new market-rate apartments, and additional for-sale townhouses and affordable apartments are planned.

“We had a moat that separated the East Side neighborhood from downtown,” Rochester Mayor Lovely Warren told The New York Times. “Filling in the Inner Loop gives people the ability to more easily get around. It gives us more space to develop. Before this, businesses had to stop development. They had nowhere to go because of that highway.”

Now, the City of Rochester wants to fill in the northern section of the Inner Loop, which carries just 20,000-25,000 vehicles a day, and replacing it with a surface street—reconnecting the entire east and north side of downtown to nearby neighborhoods. Studies have shown that the majority of the traffic can absorb into the downtown street grid, which is well-equipped to handle the load.

Beyond even that section, the remaining Inner Loop continues to pose physical barriers between the downtown and adjacent neighborhoods, and much of the land on the corridor is vacant with an opportunity for development. The Inner Loop transformation may continue to drive Rochester’s growth in the future—revitalizing neighborhoods, bringing businesses, and adding jobs.