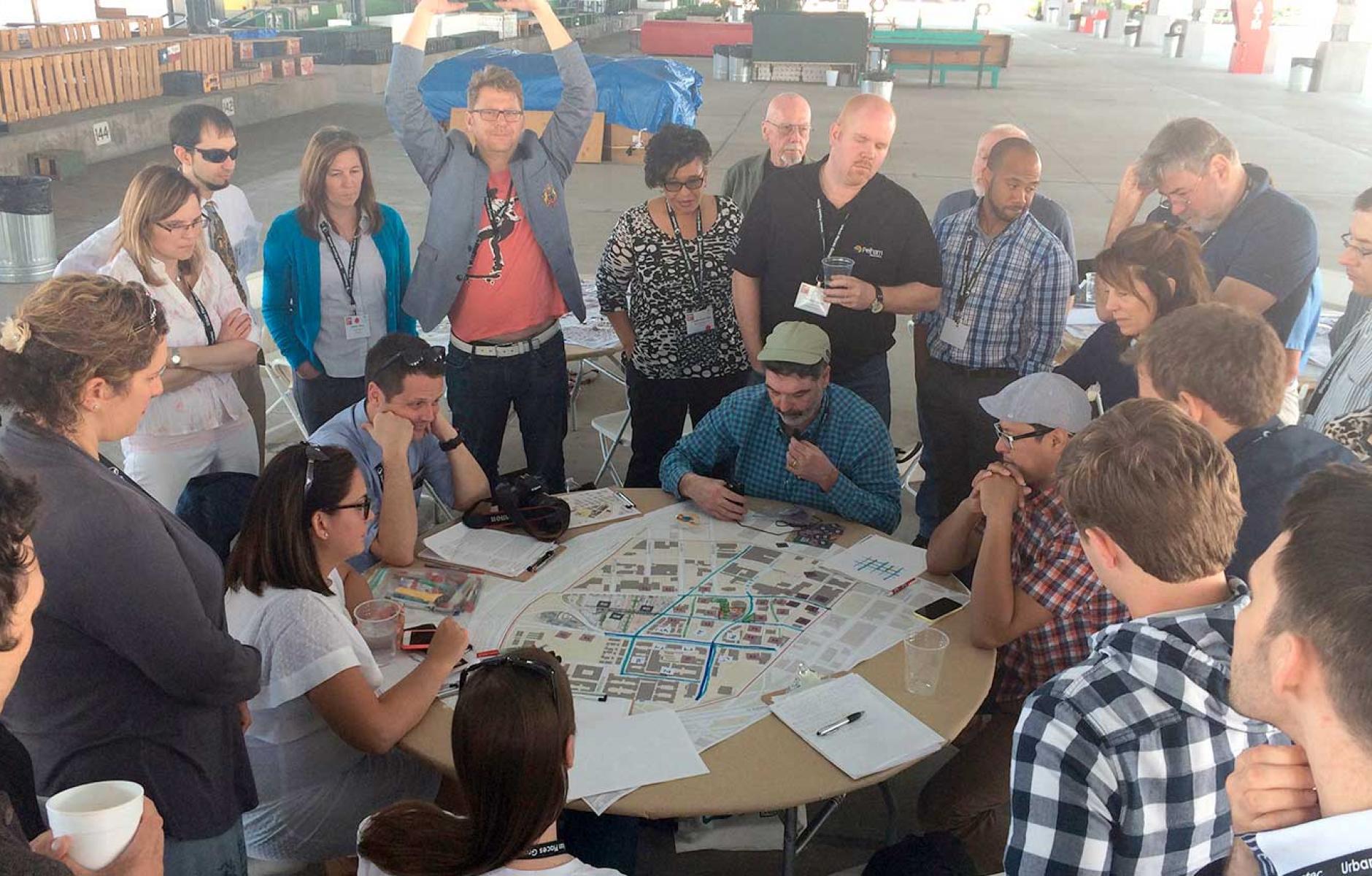 Code workshop at CNU 23 sponsored by DPZ and Placemakers
Policy

Andres Duany offers more than 20 reasons why urban design coding is necessary—and he hopes that someday it will no longer be needed.
ANDRES DUANY   &nbspJAN. 25, 2017

Within the last half-century, some 30 million buildings have degraded cities and reduced landscapes. Must we tolerate this comprehensive disaster in exchange for the, perhaps, three thousand great buildings that great architects have produced? Such a win-loss ratio is as unacceptable in architecture as it would be in any other field. We are compelled to intervene and have found that codes are the most effective instruments of reform.

We must code because the default setting in contemporary design is mediocrity and worse. Those who object to codes imagine that they constrain architectural masterpieces (their own, usually). But great buildings are few and the more likely outcome is kitsch. Codes can assure a minimum level of urban and architectural competence, even if in so doing they constrain certain possibilities.

We use codes because those who are charged with designing, supervising and building communities tend to ignore education and avoid exhortation, but they are accustomed to following codes. It was the achievement to the mid-century generation of planners to have embedded codes in the political and legal process. We must take advantage of this.

We code because ours is a nation founded on law. We prefer to work within known rules rather than be subject to the opinion of boards, politicians and bureaucrats.

We code because bureaucracies cannot be (have never been) dismantled.  They will however, willingly administer whatever codes are in hand. This has a potential for reform more efficient than education.

Codes are currently pervasive. Replacing them with a void is legally unsustainable. It is for us to re-conceive the codes so that they result in better places to live.

When architects do not control the codes, buildings are shaped by fire marshals, civil engineers, poverty advocates, market experts, accessibility standards, materials suppliers and liability attorneys. Codes written by architects clear a field of action for typological and syntactic concerns.

We code because unguided towns and cities tend, not to vitality, but to socioeconomic monocultures. The wealthy gather in their enclaves, the middle-class in their neighborhoods, and the poor in the residue. Shops and restaurants cluster around certain price-points, offices find their prestige addresses and sweatshops their squalid ones. Some areas uniformly gentrify, while viable neighborhoods self-segregate and decay. This process occurs in historical cities no less than in new suburbs. Codes can secure that measure of diversity without which urbanism withers.

We make use of codes as the means to redistribute building design to others. Authentic urbanism requires the intervention of many. Those who would design all the buildings themselves produce architectural projects – monocultures of design – but they are not involved in the practice of urbanism.

We must code so that buildings cooperate towards a spatially defined public realm. This no longer occurs as a matter of course unless coded to be otherwise. The demands of parking and the arbitrary singularity of architects tend to create vague, sociofugal places that undermine the possibility of community.

We must code so that private buildings achieve the modicum of visual silence which is a requisite of an urban fabric. Conversely, codes must also protect the prerogative of civic buildings to express the aspirations of the institutions they accommodate and also the inspiration of their architects. This is the dialectic of urbanism.

We code to protect the character of specific locales from the universalizing tendencies of modern real estate development.

We code because the location of the urban and the rural is of a fundamental importance that cannot be left to the vicissitudes of ownership. Codes and their associated maps address the where as well as the what.

We must code to assure that urban places can be truly urban and that rural places remain truly rural. Otherwise, misconceived environmentalism tends to the partial greening of all places; the result being neither one nor the other, but the ambiguous garden city of sprawl.

We must code so that buildings incorporate a higher degree of environmental response than is otherwise warranted by conventional economic analysis.

We must code so that buildings are durable, and also mutable, in proper measure. This is crucial at the long-range time-scale of urbanism.

Without codes, older urban areas tend to suffer from disinvestment, as the market seeks stable environments. The competing private codes of the homeowners associations, the guidelines of office parks, and the rules of shopping centers create predictable outcomes that lure investment away from existing cities and towns. Codes level the playing field for the inevitable competition.

We must prepare the new private association codes of developers because it is they who have built our cities and continue to do so. The profit motive was once capable of building the best places that we still have. Codes can assist in the restoration of this standard.

We code in defiance of an avant-garde culture that prizes the alternating extremes of unfettered genius and servility to the zeitgeist. There are positions between. Urbanism intrinsically transcends the limits set by our time. We know that it is possible to affect the current reality and we accept the responsibility.

We code because we are not relativists. We observe certain urbanisms that support the self-defined pursuit of happiness (the stated right of Americans). We also observe other urbanisms that tend to undermine that pursuit. Through codes we attempt to make the first a reality.

We prepare codes because it is the most abstract, rigorous and intellectually refined practice available to a designer. And because it is also verifiable: by being projected into the world, codes engage a reality that can lead to resounding failure. In comparison, theoretical writing is a delicacy that survives only under the protection of the academy.

We code because codes can compensate for deficient professional training. We will continue to code, so long as the schools continue to educate architects towards self-expression rather than towards context, to theory rather than practice, to individual building rather than to the whole.

We look forward to the day when we will no longer need to code.