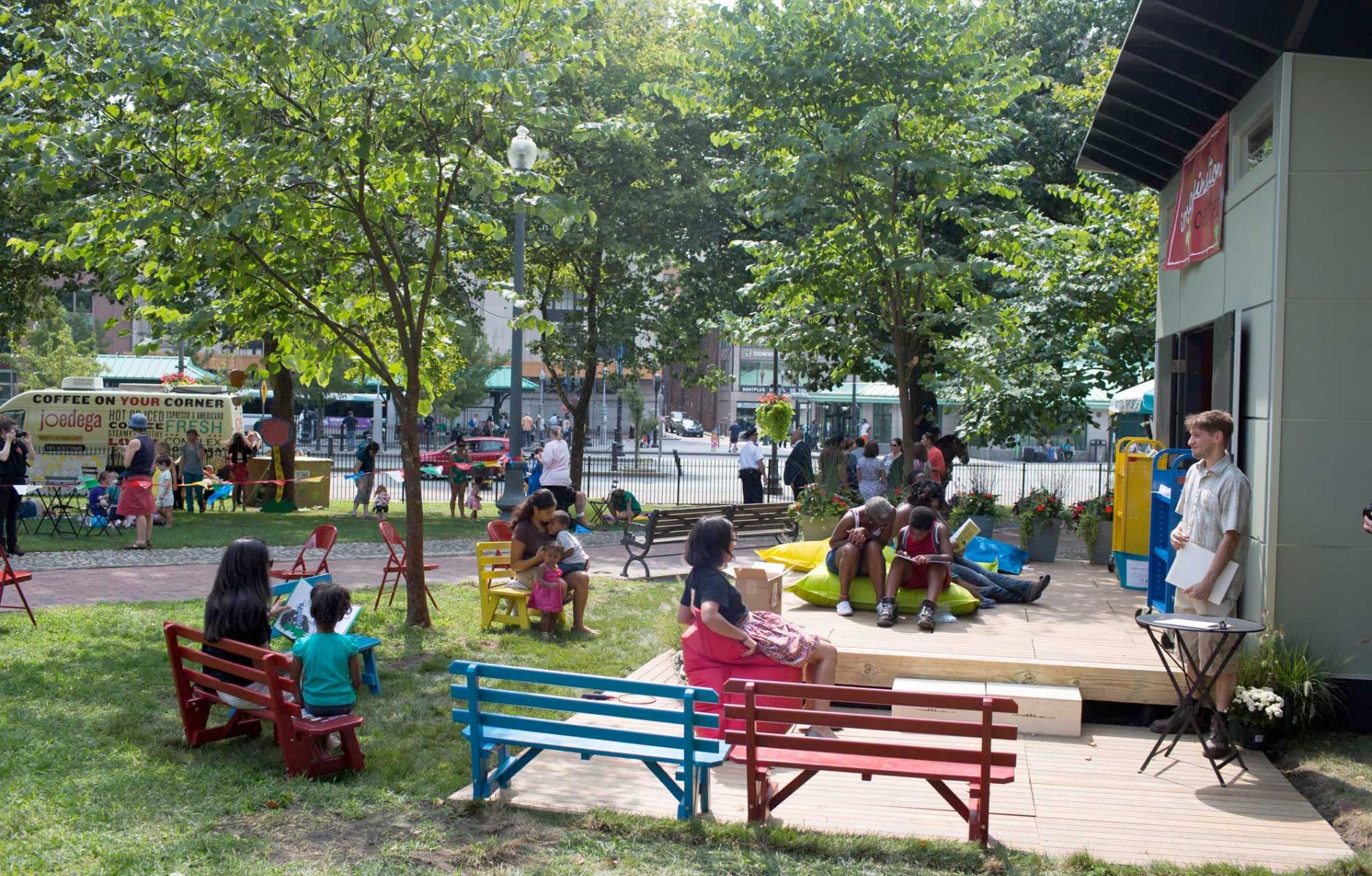 Photo courtesy of the Project for Public Spaces
Community

There are two models for development of cities and towns. One, the neighborhood model, founded on thousands of years of trial and error, brings people together.
ROBERT STEUTEVILLE   &nbspJAN. 17, 2017

We build cities that bring us together or push us apart. "Gated communities" are an obvious example of building to isolate, but other methods are also common. Streets that are too wide, with fast moving traffic, divide us. So do zoning codes that separate uses and housing types. Berms, buffers, setbacks, limited-access highways, and massive parking lots, when used routinely, put barriers and distance between people.

Mixed-use neighborhoods and great public spaces, on the other hand, bring citizens together in real communities. Here are the ten best reasons to design and build places that support community:

1) For freedom and choice in mobility

When you live in a place designed to keep people apart, you have to get around by motor vehicle. When you live in a walkable neighborhood, you can still drive if you want to. But you can also walk, ride a bike, hop on a bus or train, and often take car-share or bike-share.

Humans are social, yet this primary fact of life is oddly absent as a core consideration in modern urban development regulations that separate uses and housing, notes Steve Price, principal in the firm Urban Advantage. Price has gathered impressive research on how land-use policies that bring us together can reduce loneliness and social deprivation.

You know when you are in a great public place, and the pure joy that it brings is palpable. People flock to these places. There is nothing like great public places to bring people together, but activating such spaces requires people living and working in proximity—it requires the neighborhood model.

Places where people walk 10,000 steps per day as part of their daily activities have been proven to be healthier than those where people walk less, all other things being equal, notes architect Steve Mouzon. Living in a walkable place myself, I walk and ride a bike nearly every day for transportation. But I also run regularly, and the convenience of simply stepping out my door and jogging a few miles in pleasant surroundings contributes to my health. If I had to go to the gym, or drive someplace to run on a trail, I'd do it less and maybe not at all.

5) To reduce cost of living

The average car costs more than $9,000 a year. When you live in a walkable city, you drive significantly less or may even live without a car. Transportation costs are significantly reduced, which cuts combined housing and transportation (H+T) expenses. My analysis of the 25 largest US traditional cities shows combined  H+T costs of 40.4 percent of median income—that's 19 percent lower than the 25 largest sprawling cities (49.9 percent of median income). Living in a traditional city generates a lot of discretionary income to save or spend.

6) To protect the environment

Places that bring us together benefit the environment in several ways: Every trip on foot or on a bike burns fat instead of gas, keeping us healthier and the air cleaner, observes Mouzon. Also, when we spend time outdoors, he says, we get acclimated to the local environment so that when we return indoors we may be able to throw the windows open and leave the air conditioner off. Heres a graph that quantifies how transit-oriented neighborhoods reduce carbon emissions.

7) For long-lasting value and to build the tax base

Joe Minicozzi of Urban 3 has documented the productivity of American development patterns—and the most productive parts are mixed-use downtowns and neighborhoods. He has modeled scores of US cities and the data is clear: Single-use development has lower financial productivity. See below for the relative performance of Walmart compared to a downtown building in Asheville, North Carolina.

Our cities are drowning in unproductive liabilities, says Charles Marohn of Strong Towns. One reason is that we built infrastructure inefficiently during the Age of Sprawl that is now requiring maintenance. See the graph below for the amount of fire hydrants and water piping in Lafayette, Louisiana, in 1949—when the city was compact and walkable—and today.

When cities and towns are designed for separation, inevitably the thoroughfares are built for faster moving traffic. People have to drive farther, at higher speeds—multiplying risk for everybody on the roads, including those who must walk in difficult conditions. This costs lives. University of Connecticut researchers examined 24 cities in California, half built mostly before 1950—where people can drive less, walk, and use transit more—and the other half mostly after 1950. The 12 pre-1950 cities had traffic death rates of less than one-third those of the post-1950 cities.

10) To make your community unique

The more we build to separate, the more every place looks like every place else. It's hard to distinguish between shopping centers, strip commercial corridors, subdivisions, and office parks in Virginia, Oregon, Colorado, or Connecticut. But when you build and revitalize mixed-use main streets and focus on placemaking, the unique qualities of community are enhanced. That gives people a reason to go to a community, experience something different, and invest.

Bonus reason: Because it is the source of civilization. For ten thousand years we lived in settlements that brought us together in ways that allowed culture and collective memory to flourish. Traditional communities generated innovation, ideas, and new technologies, among other benefits. For the last three generations, we abandoned the time-tested patterns of building in favor of physically divided subdivisions and commercial strips. It's a form of social engineering based on theory and without precedent. Is it any wonder that our nation is divided and the "civic fabric is in ruins"?

There are two models for development of cities and towns. One, the neighborhood model, founded on thousands of years of trial and error, brings us closer together. It includes buildings and yards that allow for privacy, but also forms an intricate public realm that supports community. The other, conventional suburban development, generates a public realm that is mainly suited for driving through. It became dominant in the middle of the 20th Century, supported by zoning codes, public infrastructure, and policy at every level of government.

We need to finance and legalize development that builds community and brings people together. If we don't, we lose.