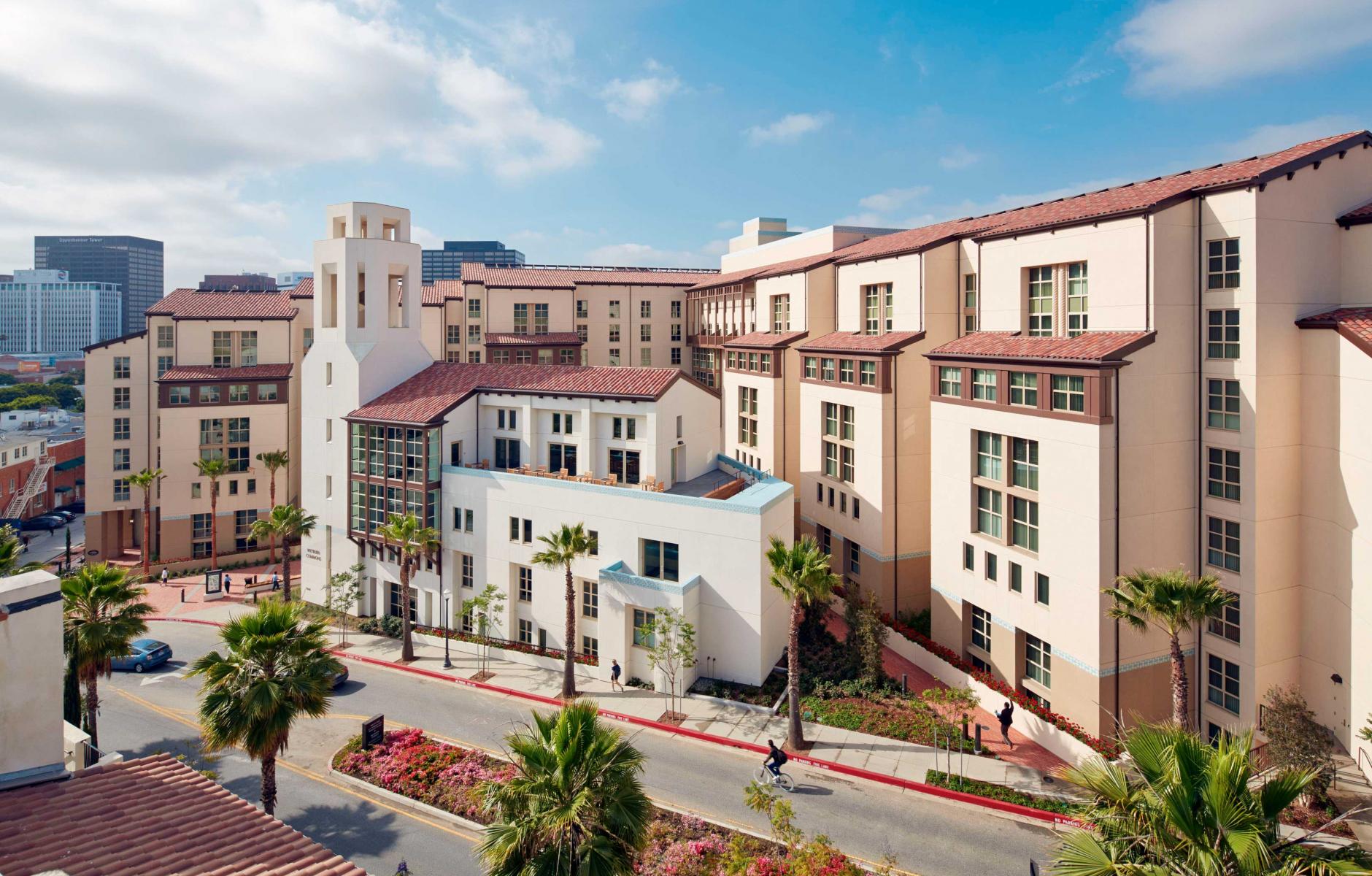 From parking lot to urban tour-de-force

Urban design and architecture on a leftover parcel bring a campus and a Los Angeles neighborhood closer together.
ROBERT STEUTEVILLE   &nbspOCT. 3, 2016

For the University of California in Los Angeles, UCLA Weyburn is more than just graduate student housing. The 500-unit apartment block and community building ties together a fragmented part of the university’s campus, realizing the vision of a thirty-year-old master plan. Built on what was formerly a two-acre parking lot on the edge of the UCLA campus, UCLA Weyburn is a landmark for the surrounding neighborhood.

Thirty years ago, an ambitious campus master plan proposed a pedestrian-friendly “spine” connecting different destinations. The plan was mostly ignored, save for one building that created a beautiful, isolated arcade. UCLA Weyburn, designed by Mithun|Solomon with STUDIOS Architecture, builds on this arcade to link the walkable southwest campus to the heart of the Westwood neighborhood. The new building is organized around a grand public paseo, providing a view of the tower of Westwood’s landmark Fox Theater two blocks away.

The graduate students who live in the building come from all over the world. They need a sense of community and place amid surroundings that are foreign. The new building provides appealing outdoor public spaces, a community building with gathering places for students, and a level of access and walkability that integrates residents into the neighborhood. “The high amount of building perimeter also provides abundant daylight for all the units,” Mithun notes.

Though the project is large, a sensitive plan and design articulations comfortably mingle UCLA Weyburn with smaller buildings in the neighborhood. The campus becomes a good neighbor, adding value to the town—both economically and socially. The building’s innovative serrated footprint more than doubles the density that the university expected on this awkward remnant site.

“My office looks onto the south elevation, so it’s always in view. It’s one of my favorite UCLA projects,” says Kathleen FitzGerald, UCLA’s director of project development, capital planning, and finance.

UCLA Weyburn represents a contemporary, community-focused interpretation of the Southern California Mission Revival tradition—showing that this style can be an inventive, living architectural language. By reimagining a leftover parking lot as a new residential and educational center for the campus and neighborhood, the project does a service to its community.