Ten acres that transformed a city 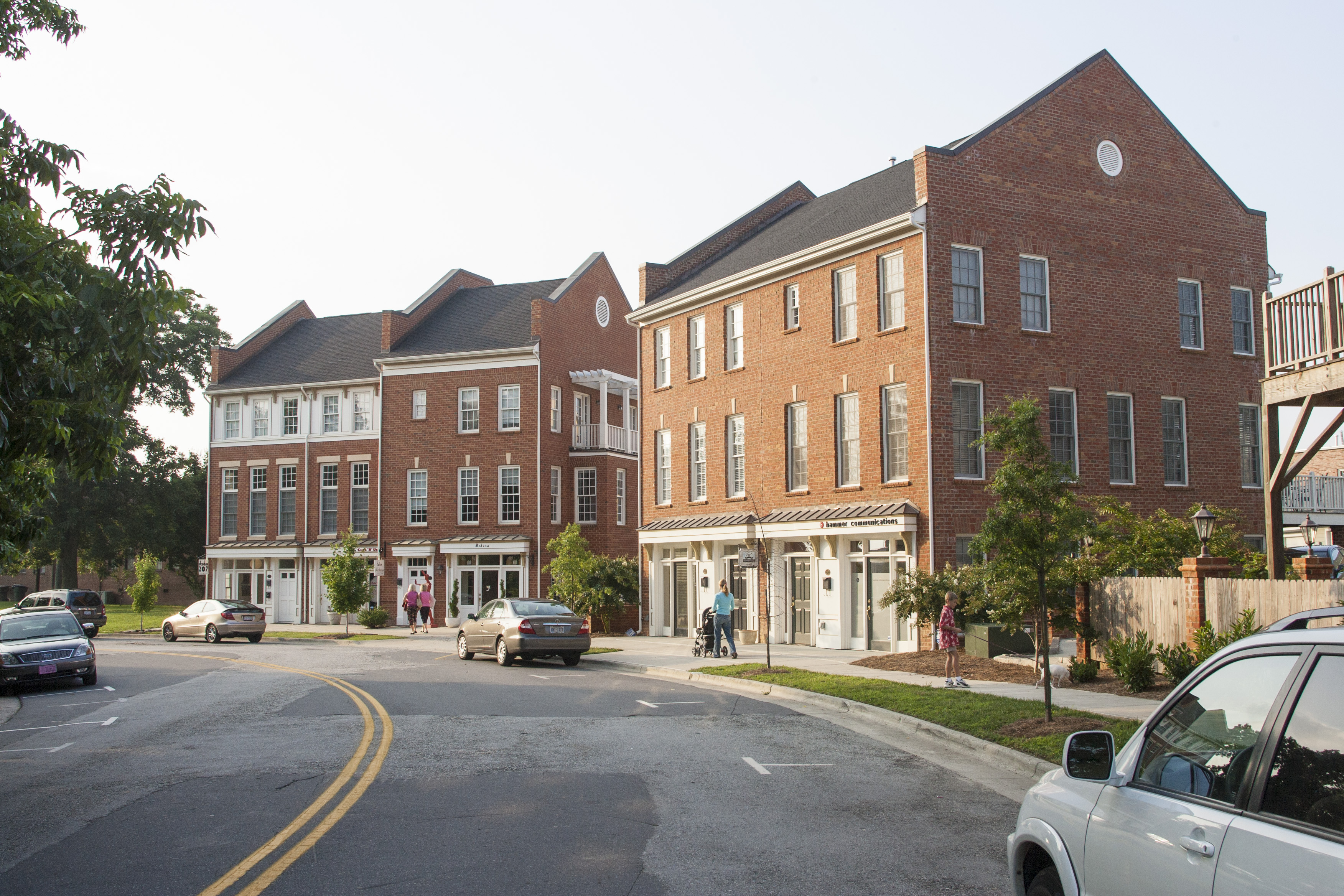 When the city purchased properties and sought a private developer to rebuild a small neighborhood just south of downtown, builders thought the city had lost its mind. The area harbored prostitution and crack use, but few long-time residents. There was little interest from the local firms—but, to the city's surprise, a suburban developer from Charlotte, 90 miles away, stepped in.

Developer Nate Bowman was immersed in the practice of traditional neighborhood development, or TND, and worked with the similarly forward-thinking architect Thomas Low. Low applied TND concepts to improve the city's plan, which already included ideas drawn from New Urbanism. 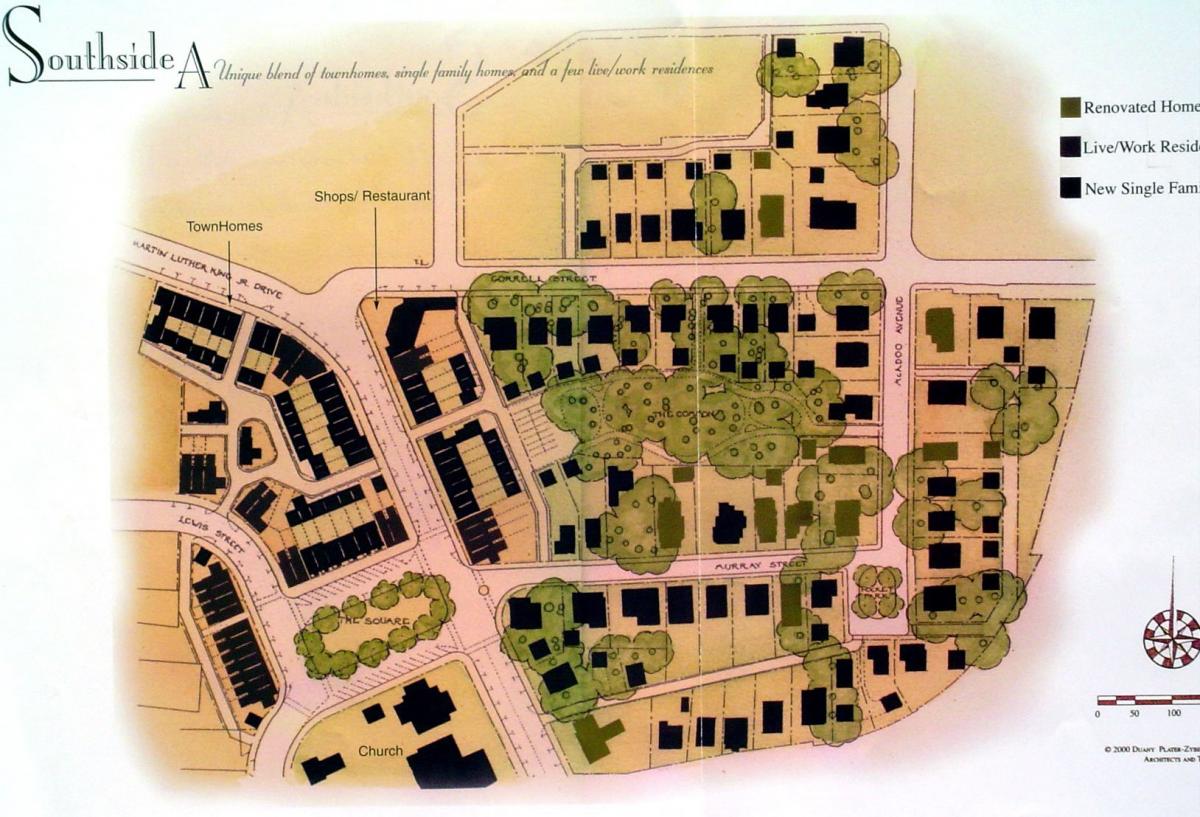 The 2000 Plan of the Southside Neighborhood. Source: Tom Low.

Bowman's 7-block project was a big success. Property taxes rose 800 percent over 1995 levels, according to a 2005 report. The heart of Southside—largely vacant in the 1990s—saw values rise more than 11 times with new townhouses, live-work buildings, and condominiums. Southside had an even bigger impact on downtown as a whole.

"Southside began the renaissance of downtown," Scott says. “There's been lots of changes in downtown since 1990s, but it really started when people saw this project was successful. It was almost like old-fashioned urban renewal, but it was so well done. There was a strong community investment, and it did so well financially. The city recouped its investment many times over. The area has grown beyond our fondest dreams."

At the time, Southside included large Victorian homes cut up into boarding houses. Historic preservationists pushed for houses to be restored, and Bowman preserved enough homes and built new ones with compatible architecture. "It's hard to tell the infill from what was there," Scott says.

Transportation was a challenge. The historic block-and-street structure remained intact, but the primary through-street—Martin Luther King Drive—felt like a car-oriented arterial. To tame MLK Drive, the team worked to bring buildings up to the sidewalk—and adding on-street parking. 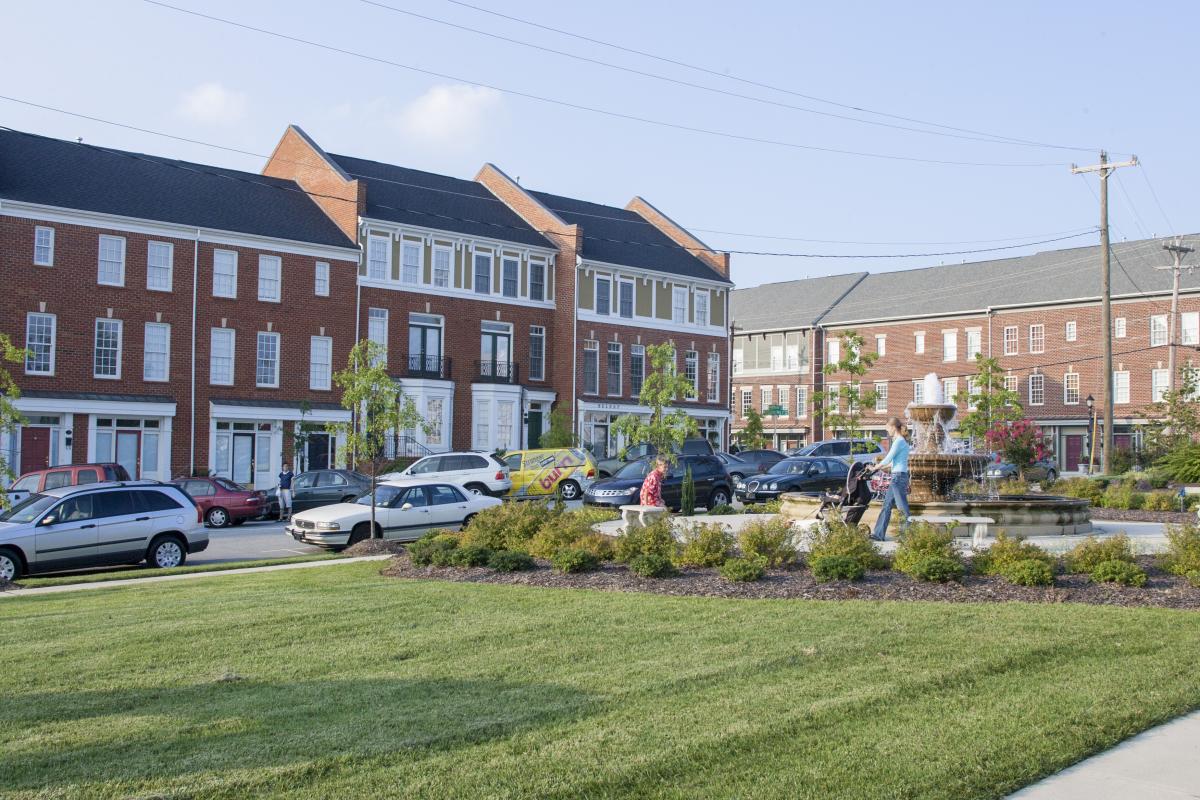 Engineers, concerned about turning sight-lines, sought to eliminate most of the on-street parking in the plan—which, Low says, would have resulted in speeding and reduced values on the thoroughfare. On-street parking was saved by making some streets one-way. Today, MLK Drive has a strong sense of place.

The city made an early decision to go with TND, notes Sue Schwartz, Southside project manager and now head city planner for Greensboro. When officials realized that TND would require multiple variances, Greensboro adopted a TND code (before the term form-based code was coined). Low's plan included alleys—although the city previously abandoned its alleys—generating opposition from the trash collection department. "Introducing alleys to Greensboro in 1999 was not easy," Schwartz says. The city toured suburban TNDs like Southern Village in Chapel Hill to prove that traditional neighborhoods could be built and sold again.

The best decision was working with Low and Bowman, who hired Low a local general contractor named Bob Isner. "No idea was too crazy for Nate,” says Schwartz. “We had a talented designer (Low) who elevated the plan. If Bob had not built that first group of live-work units with such excellent quality, we might not have gotten past that stage.”

Southside is now a mixed-race, mixed-income area—a melting pot, Scott says. It has no dedicated affordable housing, but adjacent neighborhoods still have considerable affordability. “It has aged well,” says Schwartz. “It is truly multicultural and multigenerational neighborhood. We never thought that it would attract families, but a ton of kids live there.” 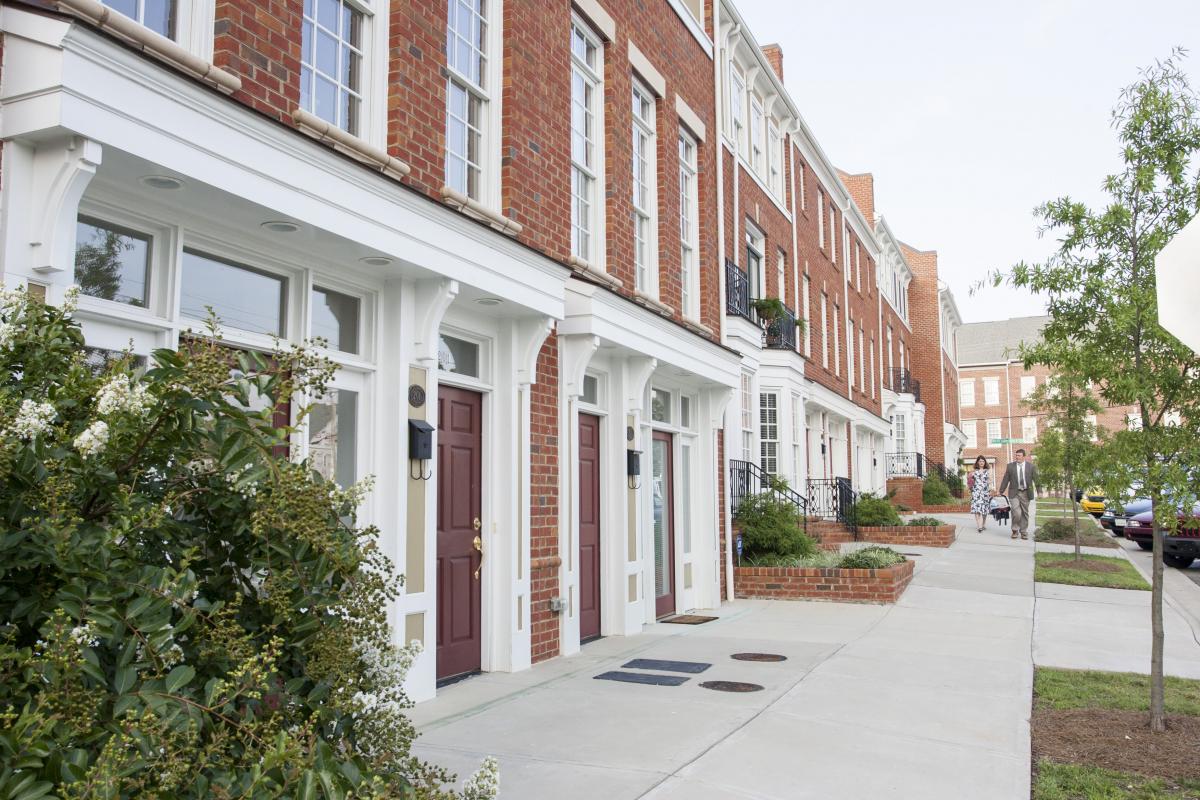 In North Carolina, most of the construction is still in the form of production houses on car-oriented subdivisions by national builders. "One thing cities can understand is this does represent a lifestyle. It's not what everyone wants, but there is a very strong market of people who want to live like this—with the transport options, location, and access to goods and services," Scott says.