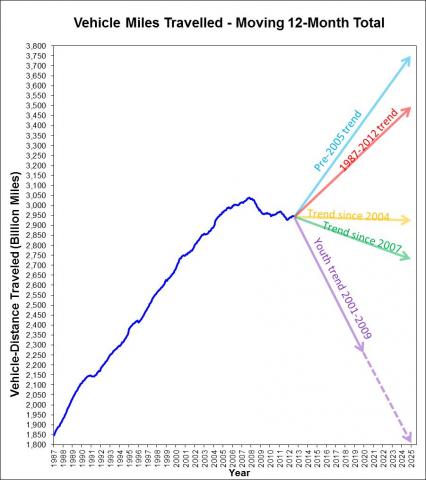 A recent blog from Twin Cities Sidewalks highlights growing evidence that vehicle miles may have peaked. If the right policies are put in place, vehicle miles can go down even as the population and economy rises. The graph dramatically shows the historical trends of vehicle miles traveled in the US and how they have changed in recent years. Young adults, who may set the direction for generations to come, are on a steep downward trajectory. After that graph came out, the Federal Highway Administration reported that only 67 percent of 16-to-24 year olds had driver's licenses in 2011, the lowest level since statistics have been kept. For cities, where more alternative transportation options are available, the trend is potentially stronger: from 2005 to 2009, as the population of Washington, DC, grew by 15,000, car registrations in the District dropped by 15,000, according to Jeff Speck in Walkable City. This adds impetus to getting rid of policies like minimum parking requirements (why turn America into even more of a parking lot than it already is?). Let's, instead, go with the flow and spend more on walking, biking, and mass transit, and less on expanding highway capacity for cars that likely will not be there.

• Subscribe to Better! Cities & Towns to read all of the articles (print+online) on implementation of greener, stronger, cities and towns.

• Get New Urbanism: Best Practices Guide, packed with more than 800 informative photos, plans, tables, and other illustrations, this book is the best single guide to implementing better cities and towns.