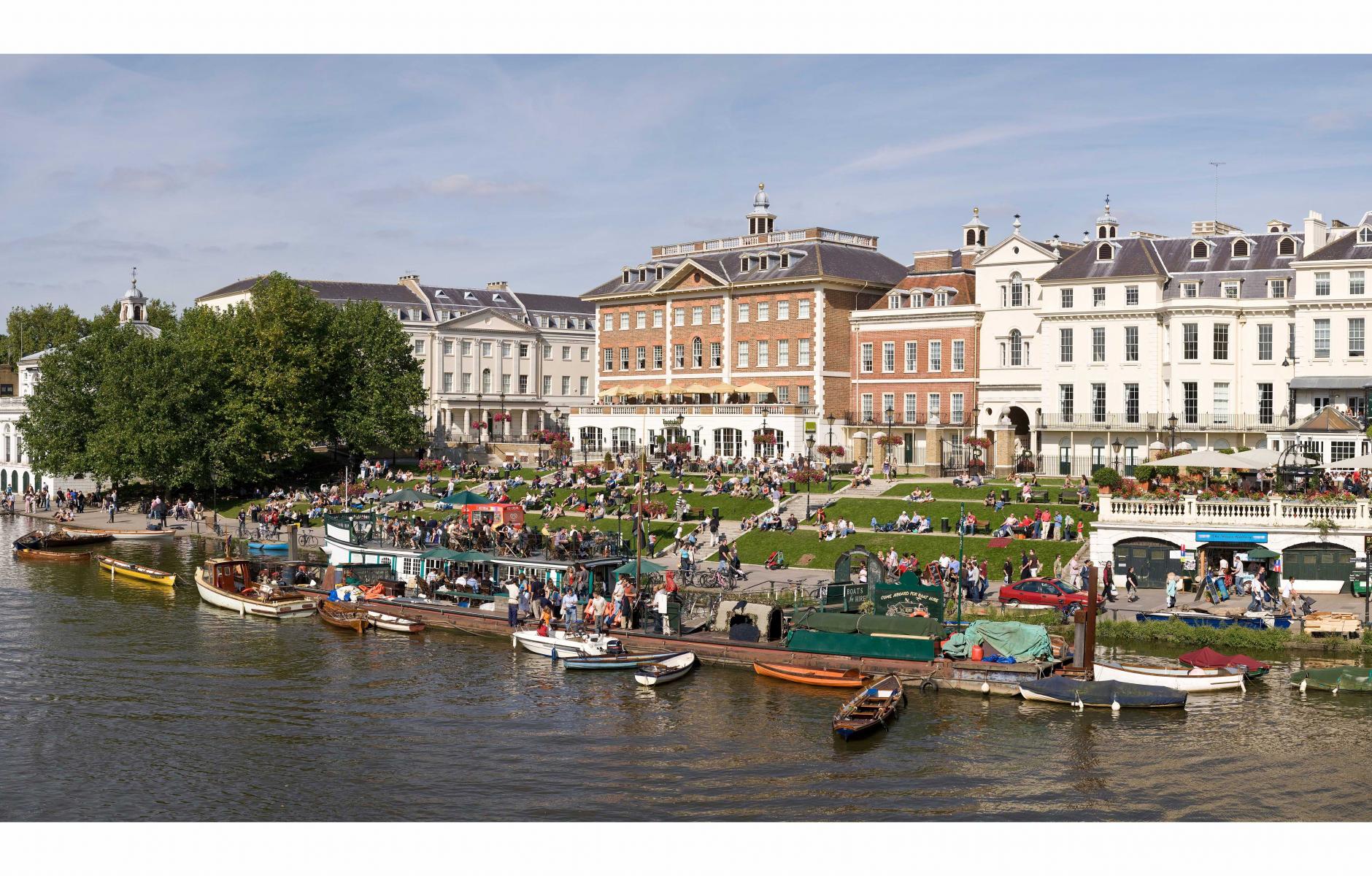 A human-centered architecture for our time

In The Humanists Versus the Reactionary Avant Garde, Charles Siegel illuminates the question of what progressive, contemporary architecture truly means.
ROBERT STEUTEVILLE   &nbspAPR. 7, 2016

The Humanists Versus the Reactionary Avant Garde was sitting on a shelf in my office, awaiting review, for several weeks. I was busy, and in a chance conversation I told CNU co-founder Andres Duany that I didn’t know when I would find time to read it. “You have time for this book,” Duany assured me.

The book’s title, and the cover image of the Gherken rising aggressively above traditional London buildings, gives the impression of just another polemic about style. In reality, author Charles Siegel clarifies the confusing world of modernism and post-modernism and connects them to New Urbanism in new ways—and he does this is a compact 162 pages. Woven through the text are small black-and-white photos that perfectly illustrate Siegel’s points.

I don’t agree with every point in the book, but Siegel is very persuasive. Whether you care about style or just want to make good places for people, the book offers useful insights—and not just about architecture. Siegel discusses the history and practice of New Urbanism at length, arguing that it addresses critical issues today relating to society and the built environment.

“Unlike the avant gardists, the New Urbanists are part of a powerful movement to reform society,” he says. That movement includes environmentalism, which favors New Urbanism and smart growth because it preserves open space and reduces energy consumption.

“The anti-freeway and anti-slum clearance movements of the 1960s and the New Urbanism that followed have been an integral part of the progressive politics of our time, and they have helped to shift progressives away from the technophilia of the 1950s and toward a more sensible view that we should use technology for human purposes.”

He places New Urbanism, modernism, and post-modernism into a historical context that explains the eclectic and confusing architecture of today. Although modernist planning and architecture were misguided in many ways, they expressed genuine ideals and promised a better life. Siegel demonstrates that the mantra “form follows function” was never honest: Modernists often used materials and forms that were not practical or efficient. The real aim was to express technological progress and a futuristic vision.

By the 1960s, that vision was nearing exhaustion because many of the promised benefits were not delivered. Jane Jacobs’ The Death and Life of Great American Cities explained what many people were already noticing—modernist planning was making cities worse. The critique on modernist planning was mostly negative at first—arguing against urban renewal and sprawl—until the New Urbanism offered a positive alternative beginning in the 1980s.

In architecture, a similar critique led to post-modernism (PoMo) in the 1970s, but that critique had two strands, Siegel notes. One held that modernism was cold and sterile and aligned with the corporate economy. That led to a “serious post-modernism” that took traditional forms seriously.

The most important post-modernist theorist of this stripe, according to Siegel, A Pattern Language author Christopher Alexander, focused on traditional patterns more than style—in this way, he is similar to new urbanists on the planning side.

The second critique, framed by Robert Venturi and Denise Scott-Brown, derided mid-century modernism as boring. This strand of post-modernism mocked the seriousness of functional modernism through ironic and grotesque use of traditional ornament.

Sometimes PoMo was both serious and ironic. Philip Johnson’s AT&T Building in New York City is ironic in its roofline, which resembles a Chippendale chair. “At the ground level, the building is a serious attempt to humanize the cityscape by providing the sort of interesting textures that were common in traditional buiildings.”

Ironic PoMo caught on with the architectural critics and the academy—so much so that the serious side has been virtually forgotten. The ironic focus led directly to today’s “starchitecture” of Frank Gehry, Daniel Libeskind, the late Zaha Hadid, and others. This “avant gardist” architecture is similar to modernism in its fascination with technology and modern art, minus the social agenda. “Its goal is to create sculptural icons that attract attention to themselves, rather than to create good places for people to be,” Siegel writes.

Siegel’s critique of the avant-gardists is trenchant, pointed, and sometimes funny. He mocks the need by starchitects to design new and flashy buildings, often at the expense of users and practicality. The renowned MIT linguist Noam Chomsky, who has an office in Gehry’s Stata Center, struggled with vertigo due to the tilted and angled walls, which he solved by filling the office with plants to hide its shape. Talk about “planting vines,” Frank Lloyd Wright’s prescription for architectural mistakes, usually applied to the outside of buildings. But Chomsky still can’t hang a blackboard. The Stata Center also required massive repairs, so The Boston Globe labeled it a “$300 million fixer-upper.”

I like the term “avant gardist,” which Siegel uses, he explains, because these architects are not genuinely avant-garde—they don’t address social issues and they depend on rich corporations and institutions for patronage.

“Today’s avant-gardists consider themselves progressive, but they are actually reactionary: They have forgotten the lessons of the 1960s and 1970s and gone back to the technophilia of mid-century modernism.” This is something new in the history of modern art, says Siegel: “a reactionary avant garde.”

Siegel’s line of criticism may touch a nerve with the design elite: If there is anything that starchitects and their champions will recoil from, it is being associated with reactionary politics and anti-progressivism.

Siegel sheds light on the animosity between new urbanists and the avant gardists. Planning and architecture were philosophically aligned from the 1930s through the 1970s, but now new urbanists are the most influential urban designers.

The second neo-traditional form is what Siegel calls the “ ‘break up the box style,’ which is probably the most common style of residential buildings today.” Now that Siegel puts a name to it, I realize that this style is everywhere. Architects are trying to imitate the scale and massing of traditional buildings without using traditional ornament. Siegel notes that this break-up-the-box style sometimes results in strange designs—which he attributes to lack of training on the part of architects on how to achieve the goal of traditional scale and massing.

In a section on how Classical architecture is relevant, Siegel recommends use of the “Classical box” for housing, a vernacular style that has been employed successfully in new urban projects like Doe Mill in Chico, California. Some new urbanists call this type of house a “four square,” and it is simple, elegant, efficient, and cheap to build. Local builders can be trained to use this style, which is suitable for single family as well as small apartment buildings and commercial buildings. Historic precedent can be found from coast to coast.

A chapter on evolutionary biology argues persuasively why form-based codes can make places with both variety and consistency, which people are hard-wired to find appealing.

Although Siegel doesn’t have all of the answers, The Humanists confronts a vital issue: How can architecture and design address the human needs of our time? In doing so Siegel has written a gem of a book for urbanists, designers, and anyone who cares about building good places. 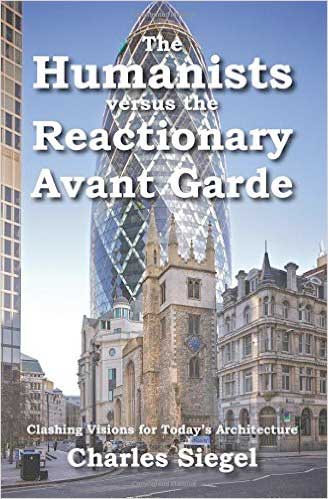