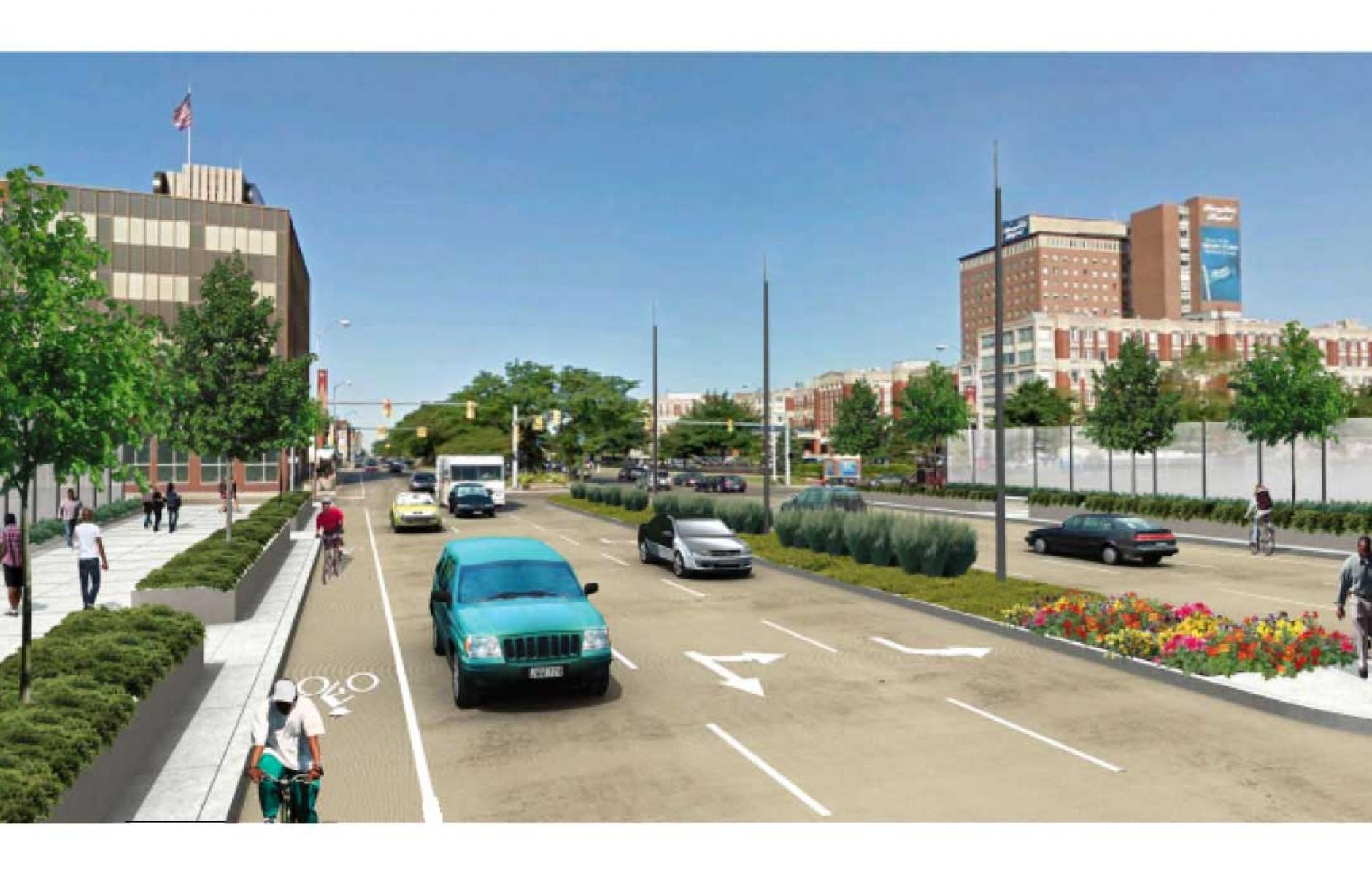 “The hospital can be a catalyst to create healthy communities in which walking, social engagement, and positive economic transformation are facilitated.”
ROBERT STEUTEVILLE   &nbspJUL. 20, 2016

Hospitals across the nation are talking about making neighborhoods around them better and encouraging active living—but none have adopted a more ambitious and comprehensive plan than Henry Ford Health System (HFHS) in Detroit, Michigan.

The organization’s headquarters and largest facility, the 800-bed Henry Ford Hospital, is located in an area of the city that has been losing population and plagued with vacant properties. The hospital is located across a freeway and just to the northwest of Midtown, a neighborhood in Detroit that has come back to life in the last decade with new investment, housing units, and a streetcar line.

Dr. John Popovich, board chairman of Midtown Detroit Inc.—which includes Wayne State University, Detroit Medical Center and HFHS—and CEO and president of HFHS, was inspired by Midtown’s success and the notion that it could be transported. “We see enormous opportunities for Henry Ford Hospital to engage in placemaking, street transformation, and neighborhood revitalization,” Popovich says. “The hospital can be a catalyst to create healthy communities in which walking, social engagement, and positive economic transformation are facilitated.”

The NW Goldberg neighborhood, home to HFHS, includes the Motown Museum, where Detroit’s famous Motown records operated from 1959 to 1972. This area hadn’t seen a house built in 30 years—even though it is next to a major employment center. Like many urban medical facilities, Henry Ford Hospital separates itself behind a fence from the surrounding area. The hospital’s 30-acre campus is expanding to a 25-acre site to the south, across the busy, automobile-oriented Grand Boulevard. That expansion opens opportunities to redesign the thoroughfare to enable people to cross it on foot and bicycle—making it more human-scale—and build a mixed-use neighborhood anchored by health services rather than another isolated medical campus.

“We’re trying to break down the old-fashioned superblock mentality—make the facility more walkable, make is safer,” says Kent Anderson, a planning consultant who has helped the hospital to chart a new course. “The plan represents a challenge to the usual institutional thinking that everything has to be internalized. We are trying to move many of the shops, services, and cafeterias associated with a large hospital to the street front.”

Anderson himself has been a cancer patient on and off for 12 years, and so he has been in an out of many medical centers. Some facilities relate to the outside world better than others, he says, but he has never seen one hospital that couldn’t do more to connect to the community. Physical connections to the community not only encourage ambulatory exercise, but also have psychological benefits as well, he says. “People who are in treatment should not be denied the possibility of a healthy living environment,” he says. Many patients and their families need to get outside and experience things, he explains. “The neighborhood becomes part of the experience—rather than the institutional environment is all you see and feel.”

In 2006, when HFHS began to plan its expansion, Detroit was emptying out. HFHS realized that if the institution were to stay in Detroit, it had a responsibility to revitalize the neighborhood and bring some of the population back. A strong host community is vital for attracting employees, as well.

HFHS is therefore thinking bigger than just making the expansion walkable and mixed-use—the institution also purchased more than 200 parcels in a 300-acre area surrounding the hospital expansion and is consolidating these sites for redevelopment. This effort has already resulted in the construction of a $30 million health distribution center serving HFHS and the Detroit Medical Center on a former industrial site about a half-mile south of Henry Ford Hospital. Furthermore, HFHS has taken on roles typically reserved for government—such as planning and implementing walkable streets. The City of Detroit has been in crises, declaring bankruptcy in 2013. The hospital has already implemented two complete streets projects and is working on a third. “The institution has taken on the role of defining and engineering the streets to create the bicycle paths and making them walkable,” says Anderson.

HFHS is also planning a major square on Grand Boulevard, which will be privately owned but designed as a public space that serves a function for the neighborhood. It will be a “front porch” to the hospital, fronted on one side by a new $110 million cancer treatment center that is scheduled to open in 2018. The square and a street makeover are designed to change the character of Grand Boulevard. Without these changes, the boulevard will continue to be a divider of the neighborhood.

The hospital has faced numerous challenges, including working with the city on street design and public spaces and dealing with its own institutional planners. The latter are industry consultants that help plan medical facilities expansions—and are distinct from urban designers like Anderson. The institutional planners were skeptical that HFHS should try to integrate with a neighborhood that is clearly going downhill. The leadership, especially Dr. Popovich, allowed the plan to move forward even in the face of experts who questioned the strategy. “He was key when being hit by institutional planners and everybody else who said that this direction is different, he stayed the course,” says Anderson.

An active role in community planning has become common for academic institutions, but is still unusual for hospitals. While other medical centers are involved in placemaking, streetscape improvements, public spaces, or mixed-use, Henry Ford is unique for “putting it all together in one big plan,” notes HFHS planner Tom Habitz.

Hospitals that embrace urban planning have much to gain but need to be prepared for intensive public engagement and sometimes controversy, says Popovich. “Given these activities constitute change, not all will be fully supportive or they may have concerns that need to be addressed by an ongoing process of discussion, listening, and working together.”