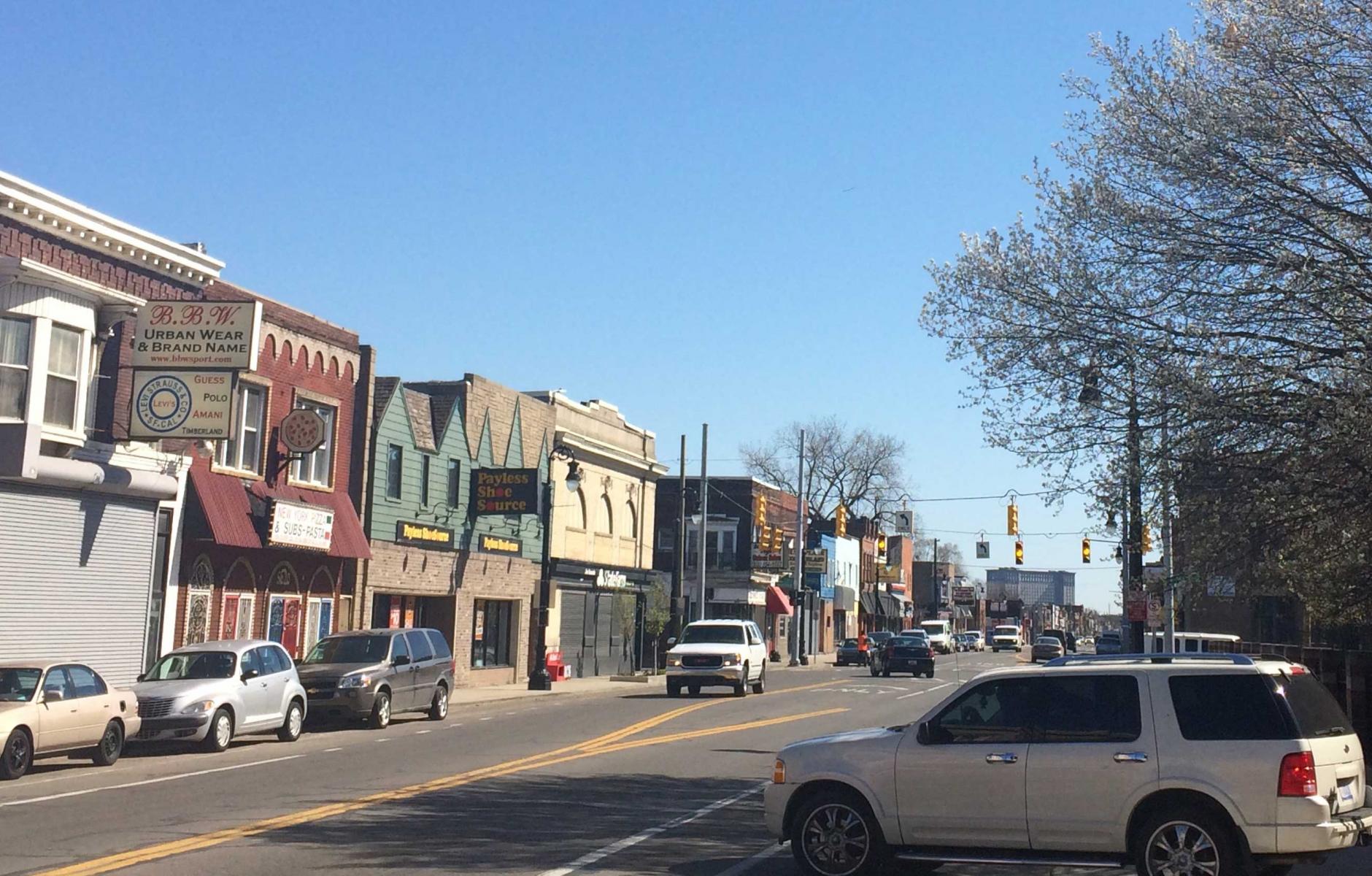 Many Vernor Highway main street buildings in Southwest Detroit are vacant on the upper floors, leaving room for people to reoccupy the center.
Health

A holistic neighborhood plan created with the help of citizens is designed to improve health.
ROBERT STEUTEVILLE   &nbspJUL. 28, 2016

Southwest Detroit has an industrial heritage and still serves as a transportation hub. The area suffers from heavy truck traffic and lacks adequate, usable green spaces.

The neighborhood has many abandoned buildings, such as a large, former city Department of Public Works warehouse on Vernor Highway, the main street. Although Southwest has not fallen to ruin like a number of Detroit neighborhoods, vacant lots are common.

The Southwest Detroit Business Asssociation (SDBA), which represents local entrepreneurs, teamed up with the Michigan State Housing Development Authority to sponsor a planning charrette in the spring of 2016 to focus on a healthier future for the neighborhood. Architect and urban designer Dhiru Thadani, an immigrant himself, piloted the event for CNU. Here's the report.

“The air quality is terrible due to truck traffic,” said one resident. “I keep my house incredibly clean, but because of the constant truck fumes it always smells terrible inside.”

Mitigating trucks is one priority of the plan. The team addressed this issue in a holistic vision to provide more green space, walkability, opportunities to socialize, and housing. In all, the team presented eight “action ideas” that reinforce one another and lead toward a healthier Southwest Detroit.

5. Use vacant city-controlled land for construction of a variety of new housing types.

6. Incorporate a range of civic spaces.

7. Transform an existing antenna tower into a neighborhood landmark.

8. Reposition the Detroit Public Works Building into a community center and maker space.

A drastic reduction in freight traffic can be achieved through three steps: Close one of the entrances to the Detroit Intermodal Freight Terminal—located in the neighborhood—and use another egress that keeps traffic from the center of the neighborhood; Restore a viaduct under the railroad tracks on Military Road, providing an alternate route for trucks; Divert traffic generated by the future Gordie Howe Bridge between Detroit and Windsor, Canada, so that existing and future truck traffic can avoid the neighborhood.

Those steps allow the intersection of Livernois and Vernor, at the heart of Southwest, to be reconfigured as a public square and community gathering spot. The 60,000-square-foot former DPW warehouse at this intersection could be repurposed as a community center and “maker space,” leveraging the practical construction knowledge of the largely immigrant population.

Vacant properties, which appear to be a liability, could be an asset to a neighborhood that needs small parks. The team set a goal of providing at least one park or playground within a 5-minute walk of every house.

“Parks have the power to transform the quality of life and stitch together the urban fabric of cities,” note the planners. New parks are designed with different programs to cater to varying age groups — from tot-lots to active play equipment, to basketball courts, to exercise equipment, to passive relaxation spaces for the elderly to congregate. An additional soccer field, a popular sport in Southwest, is proposed on an existing park.

For new public spaces to be useful—particularly for children and for the 50 percent of Detroit adults who don’t own cars—transportation choices are essential. Southwest benefits from a street grid, but many streets have been widened for fast-moving traffic. Streets can be retrofitted with bicycle lanes, crosswalks, and traffic calming measures. The narrowing of Livernois Avenue, in particular, is proposed to four lanes, from six. Livernois has too much capacity and is designed to accommodate heavy truck traffic, the planners found.

Too many vacant lots and buildings hamper walkability due to gaps in the urban fabric, leading to fewer pedestrians and “eyes on the street.” That, in turn, leads to reduced comfort and security for those outside of motor vehicles. How can the gaps be filled and more people come to Southwest in a city that is still losing population?

Fortunately, downtown and many adjacent neighborhoods have revitalized in the last 10 years. Southwest is adjacent to now-thriving Corktown, which is next to downtown. SDBA’s charrette brought in Zimmerman-Volk Associates (ZVA), a nationally known expert in urban housing markets. ZVA found an untapped market for 500 new housing units in Southwest in the next five years.

The plan calls for a range of “missing middle” housing types in new construction and renovation. One opportunity is to fill many vacant upper floors of main street commercial buildings on Vernor Highway (see photo at top of article). “Many of these buildings used to have residential uses above retail. It may be possible to bundle these upper floor residential units and apply for Low Income Housing Tax Credit (LIHTC) as incentives for the utilization of private equity in the development of affordable housing aimed at the low-income population within the neighborhood.” Restoring these buildings to mixed-use would improve diversity and economic strength to the heart of the neighborhood. Many of the vacant lots in Southwest are controlled by the city due to tax delinquency: They can be consolidated for more efficient redevelopment.

Southwest residents learned this during the planning session: A healthier neighborhood is key to a healthier community.