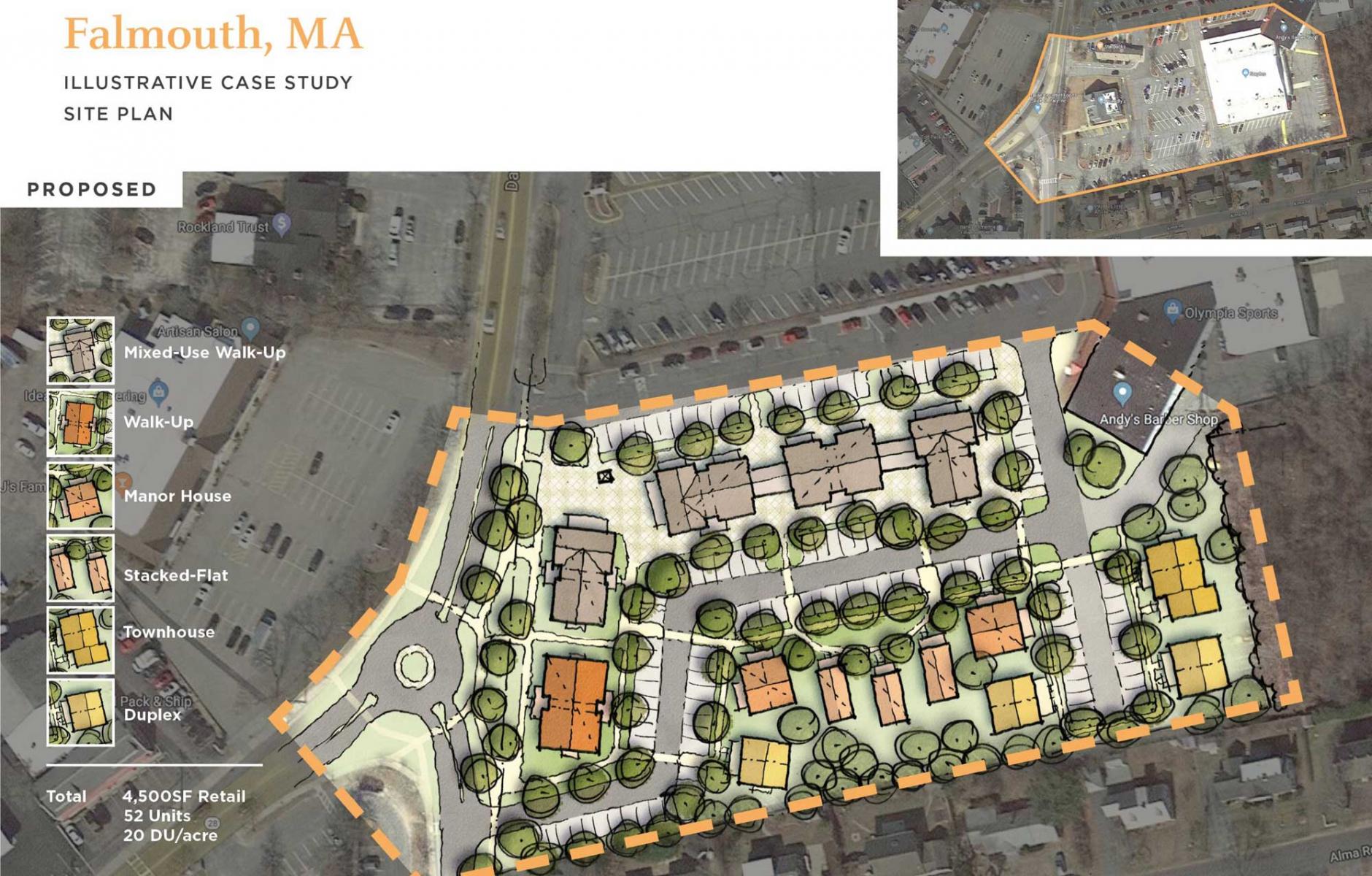 Cape Cod, the quintessential New England vacationland, has a growing affordable housing problem. The housing stock of the 70-mile-long peninsula is mostly single-family detached—82 percent—out of step with the aging population that swells from 228,000 to more than a half million in the summer.

While wages have risen slowly, housing prices have shot up since 2000, impacting the demographics of the year-round households. “Cape Cod has been steadily losing its younger generation, is unable to support much of its year-round workforce, and struggles to attract diverse talent due to its homogenous single-family housing stock,” according to architecture and planning firm Union Studio. “Young families are enticed away from Cape Cod by more affordable housing prices and as a result school enrollment is shrinking.”

The Providence, Rhode Island, based firm worked with the regional planning agency the Cape Code Commission to research and identify “missing middle” housing types. Cape residents are notoriously opposed to density—I saw this when I worked as a reporter there in the 1980s. And they are protective of the disappearing “rural character” and countryside. As large-lot new development uses a lot of land, these two tendencies are in conflict.

Toward that end, Union Studio combined several strategies, long-known to new urbanists, in an innovative way. The Visual Preference Survey, developed by Rutgers planner Anton Nelessen in the 1990s to show support for walkable development, was employed by Union Studio to gauge residents’ response to denser housing types.

Union Studio found historic missing middle types in the villages of Cape Cod—everything from accessory dwelling units (ADUs), to small apartment buildings. Photographs of these types, based on local vernacular architecture, were shown to residents of the towns from the denser Upper Cape, connected to the mainland, and the Lower and Outer Cape, which are more rural. There was a subtle difference: Residents of the more urban parts of the Cape were accepting of housing up to 2.5 stories high, while the more rural residents preferred development to top out at 2 stories.

Both of those sound fairly low density—and they may be compared to a larger metropolis—but Union Studio showed how they could achieve significant densities of 20 units per acre, far denser than typical development on the Cape since 1950.

“Entering a community and promoting change, especially increased density, is never an easy task. However, we found that the careful research and analysis of local precedent was crucial to our success. We proposed Missing Middle housing types that were historically present in each of the towns we worked with. This provided the opportunity to promote higher density and more housing choice in a format that the residents were already familiar with, as examples within the towns already exist. Residents felt more comfortable welcoming new development that would align with the existing historical character due to the proposed similarities in style and building type.”

Based on the research, the firm developed a framework for a form-based code to be adapted by Cape Cod towns.