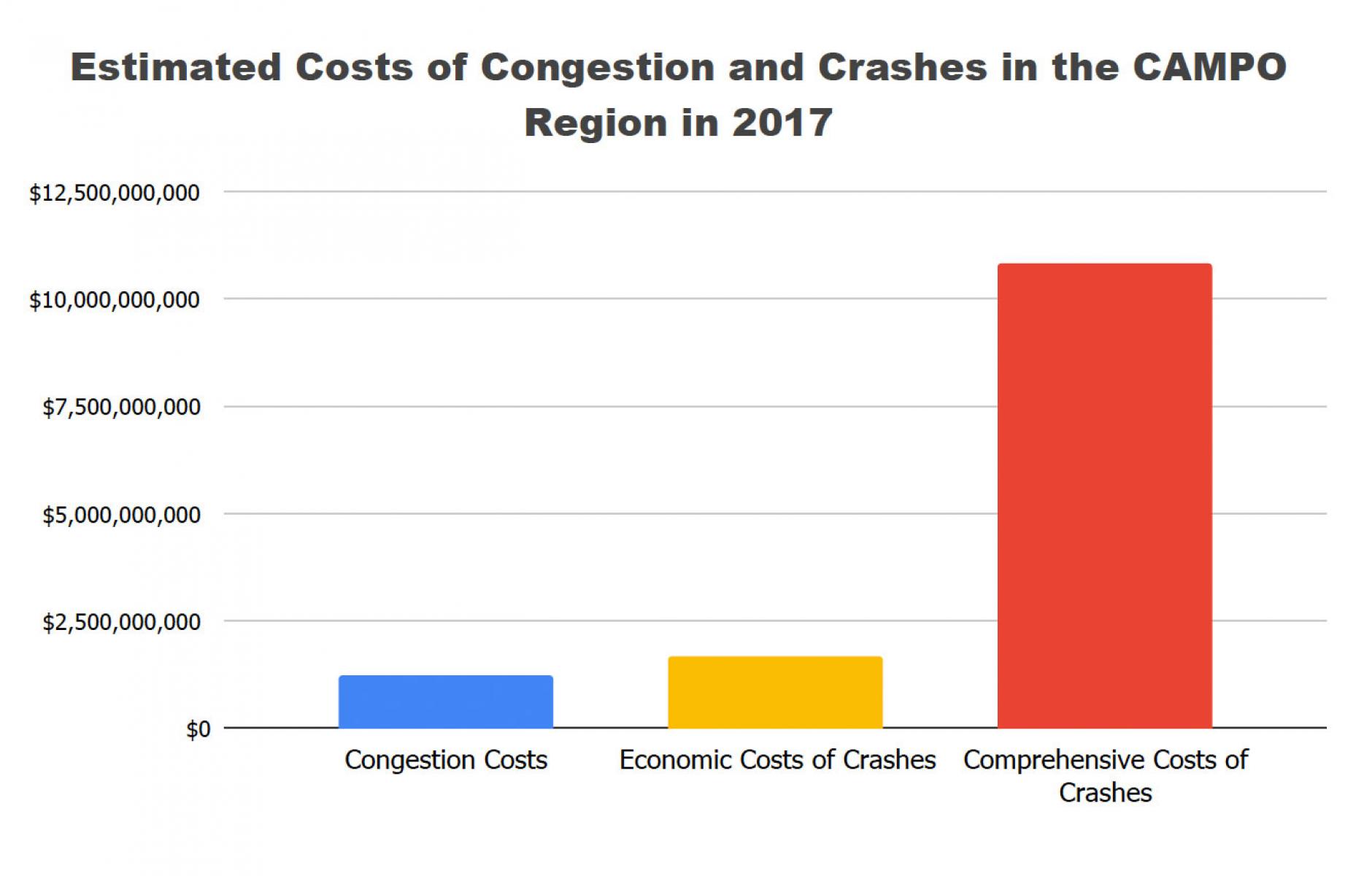 Source: Farm&City
Got A Minute

The cost of crashes is higher than congestion

Congestion costs drive highway expansion decisions, but these costs are dwarfed by the impact of automobile crashes. Comparing the two points to a better strategy than widening thoroughfares.
ROBERT STEUTEVILLE   &nbspAPR. 29, 2022

In 2019, the last full year before the Covid pandemic, the US lost $190 billion due to traffic congestion—mostly in urban areas—according to the Texas Transportation Institute’s annual Urban Mobility Report. The report provides an economic rationale for expanding highways and urban arterial thoroughfares.

The economic cost to the freight industry, about 40 percent of the total, seems real. But the cost assigned to commuters, the other 60 percent, is dubious on several counts. Commuters are not getting paid for the time they spend sitting in traffic on the way to work, and there is little reason to believe they’d be earning extra money if they captured some of those minutes back. The figure also assumes a theoretical world where, absent congestion, commuters would drive the same distance on free-flowing roads and not take extra trips and/or move further away from work. The concept of induced demand proves that, absent congestion, many commuters do drive further, using a similar amount of fuel and time spent behind the wheel.

Armed with the congestion rationale, departments of transportation and their highway expansions appear to be an unstoppable fact of life, according to Jay Blazek Crossley, executive director of of Farm&City, a land-use nonprofit in Austin, Texas. In the home state of TTI, Crossley has flipped the narrative on congestion, as he explained to attendees of CNU 30 in Oklahoma City.

That story Farm&City tells, backed up by data, is that automobile crashes cost a whole lot more than congestion (see image at top). Crashes are typically presented as a human (not economic) toll, and thus are reported in a way that is impossible to compare directly to congestion.

But Farm&City has figured out how to compare the two, using costs for automobile crashes produced by the National Safety Council. Lo and behold, the cost of crashes is an order of magnitude greater than congestion costs once they are tallied on a regional scale. Policies and projects that reduce congestion but contribute to crashes may wind up costing much more than they save (they probably don’t even reduce congestion for long, due to induced demand).

Farm&City has created a calculator to help local organizations to generate dollar figures for automobile crashes in local metro areas to help make the case against highway expansion projects. A video was posted that explains how to use this tool.

CAMPO (Capitol Area Metropolitan Planning Organization ) in the top graph refers to the Austin region, an area of nearly 2.3 million people. The graph shows the regional congestion costs in excess of $1 billion, compared to the economic and comprehensive costs of crashes shown in the center and right bars. The economic costs of crashes—including medical expenses, physical damage to automobiles, lost wages due to disabled workers, and administrative costs—are about a third higher than annual congestion costs for the region.

These economic costs look more real than the theoretical costs of sitting in traffic, but what about the Comprehensive Costs, which dwarf both the congestion costs and the economic costs of crashes? This category, as defined by the National Safety Council, covers the loss of quality of life from traffic accidents, which sounds mushy but is based on empirical studies of what people are willing to pay to avoid health and safety risks from crashes. The quality-of-life costs relate to the impact on individuals, their families, and communities. It’s a bit ghoulish, but the NSA calculates the Comprehensive Cost of each motor vehicle death at $11.1 million (a total of $430 billion, based on 2020 motor vehicle deaths in the US). The average Comprehensive Cost of a disabling injury is $1.2 million.

The total cost of crashes in the Austin region is about 10 times that of congestion costs. Farm&City calculated the costs for the entire State of Texas and got a similar ratio—an order of magnitude higher costs for crashes, relative to congestion. You can make these calculations yourself for your own region by downloading the calculator and watching the video, which shows how to find to fill it in.

The narrative of constantly needing to expand roadway capacity, justified by large congestion cost figures, is seriously undermined once those costs are compared to motor vehicle crashes.

Speeding up traffic is not the biggest area of concern that transportation planners and public officials should be focusing on, Crossley says. That would be the economic and quality-of-life costs of automobile crashes. Focusing on that would lead to investments in networks of streets that serve multiple purposes and give people choices in how to get around safely.