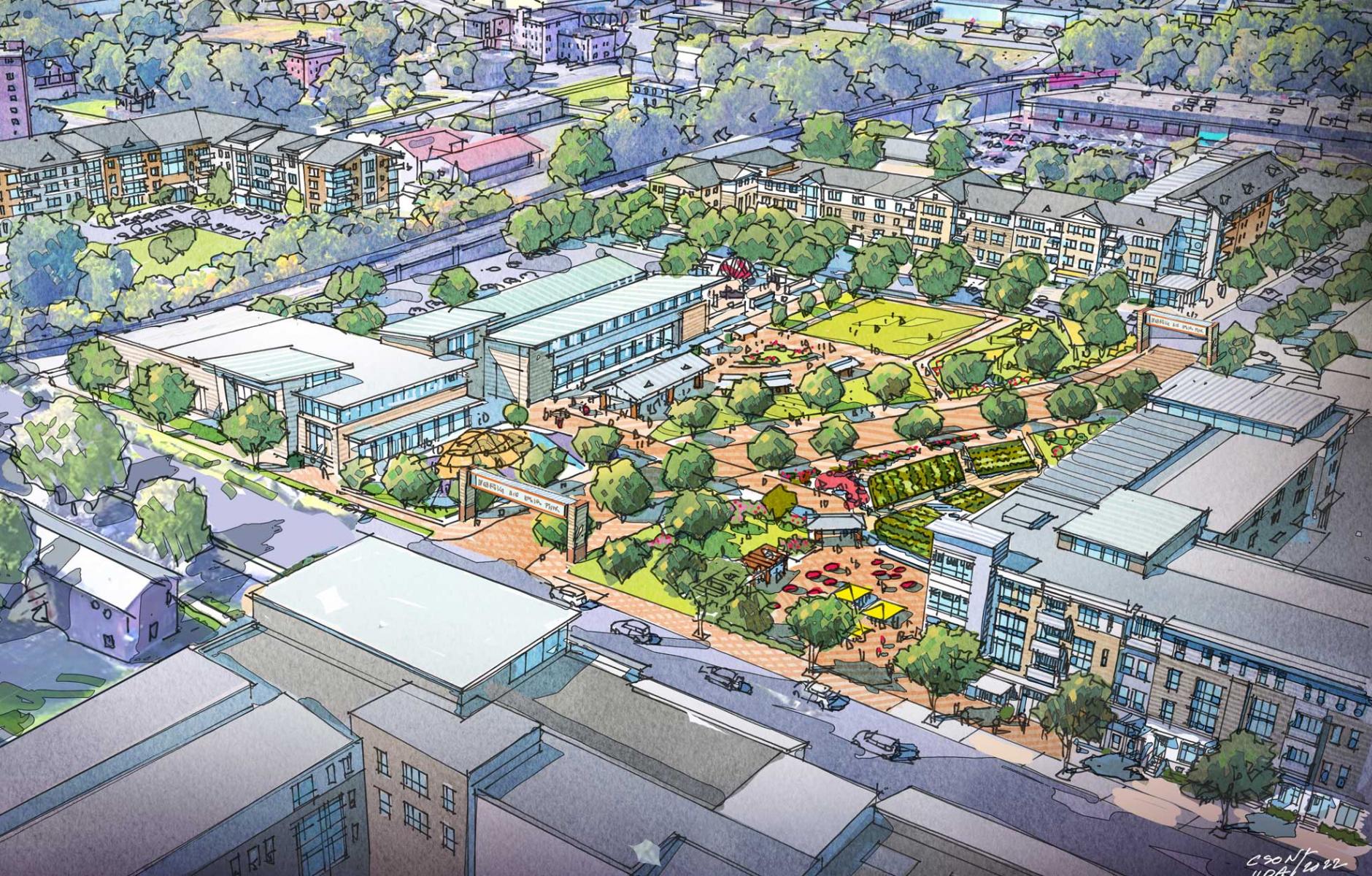 In Syracuse, New York, the relocation of I-81 creates opportunity for replacing public housing with a mixed-use, mixed-income neighborhood.
ROBERT STEUTEVILLE   &nbspJAN. 26, 2022

One of the oldest public housing projects in the US is being redeveloped in concert with the tearing down of an elevated freeway in Syracuse, New York. The transformation of the late 1930s Pioneer Homes is designed to restore a mixed-use, mixed-income neighborhood adjacent to the current Interstate 81.

The plan for Pioneer Homes, other public housing, and the surrounding neighborhood raises the stakes and opportunities for the freeway transformation. This area in Southwest Syracuse is the site of the former 15th Ward, a largely African-American neighborhood that was torn down for “urban renewal” and highway construction. I-81 is planned to be routed around the city on the current I-481, and the elevated in-city section will be replaced by a surface street, connecting this neighborhood to Syracuse University and a medical district.

The neighborhood plan, Connecting the New 15th Ward, is to be developed by McCormack, Baron, Salazar, (MBS) an affordable housing and urban redevelopment firm. Urban Design Associates (UDA) of Pittsburgh is leading the urban design and public engagement—a process that began in the spring of 2021. The Syracuse Housing Authority has set up in-person meetings for residents, but the designers have worked remotely, due to the pandemic.

The city has endorsed the plan, which is being submitted to US Housing and Urban Development as a $50 million Choice Neighborhoods grant (deadline is February 15). Normally, the housing authority would take the lead on a project like this. Because the overall effort is so important to the future of Syracuse, the City itself is initiating the application. The housing authority is a partner in the plan.

The $800 million project leverages local and state funding sources, and also includes wellness and education. The City is working with Purpose Built Communities of Atlanta, a nonprofit that promotes mixed-income housing, cradle-to-college education, and community wellness. Purpose Built Communities operates in 25 cities, and its model is combined with new urbanist design in Syracuse. The organization participated at CNU 27 in Louisville, and discussed with CNU how to combine their model with a stronger urban design focus. Purpose Built Communities set up a local nonprofit in Syracuse called Blueprint 15. Urban Strategies, a national nonprofit, is also a partner in health, workforce development, economic stability, education, and overall wellbeing.

The plan calls for the public housing to be torn down, due to its design and condition. Even if the units were renovated, they are small and their layout is deficient according to current standards, notes to Megan O’Hara, principle-in-charge at UDA. The uniform townhouse buildings, which now look like public housing, are planned to be replaced with more diverse building types that look like what it is intended to be—a neighborhood. Buildings would include a mix of public, affordable, and market-rate housing, and a range of housing types and scales from triplexes to small walk-up apartment buildings to multi-family and mixed-use.

Removal of the existing housing facilitates a restored street grid similar to the historic 15th Ward. “What we are trying to do is break up all of these superblocks and replace them with streets that are walkable and safer,” Robert Mike, president of the Pioneer Homes Tenant Association, told Syracuse.com.

The plan has a strong focus on parks and public spaces. The existing Wilson Park will be impacted by the I-81 teardown, and the community hopes that the NYS Department of Transportation will enhance the park following the construction. A new “linear park” is proposed to include community gardens, play areas, and other recreational facilities (see rendering at top of article). Fronting the park is a proposed health and wellness center, programmed by YMCA, and an early childhood learning center.

One of the desires of residents is greater security, says Mike. That can be promoted through design that encourages “eyes on the street” and street life, but also a more economically diverse area. More than half of Choice Neighborhoods have seen crime rates decline at twice the rate of the city as a whole. The program also has a track record of increased employment and household income. Across the proposed boulevard (now I-81) is Syracuse University and a medical center, both large employers, offering educational and health facilities.

An expanded plan encompasses a larger area, including disinvested blocks of single-family housing and industrial areas. The city operates a program to renovate housing in this area.

While some are skeptical that middle class households will choose to live in the area, Mike explains that “the housing authority took the philosophy that we wanted to invest in the neighborhood and invite people in.” The plan also calls for commercial spaces to allow residents to walk to purchase daily needs. Mixed-use commercial development is slated on East Adams Street, which is the boundary between the public housing and the downtown to the north.

The project has momentum from the state’s decision to tear down the highway and build a boulevard. The city has a good shot at the Choice Neighborhood grant, but the plan is to proceed (albeit more slowly), even if the grant is not approved by HUD.

The overarching goal is to rebuild social capital and restore the urban patterns that were disrupted through the highway and mid-20th Century planning.