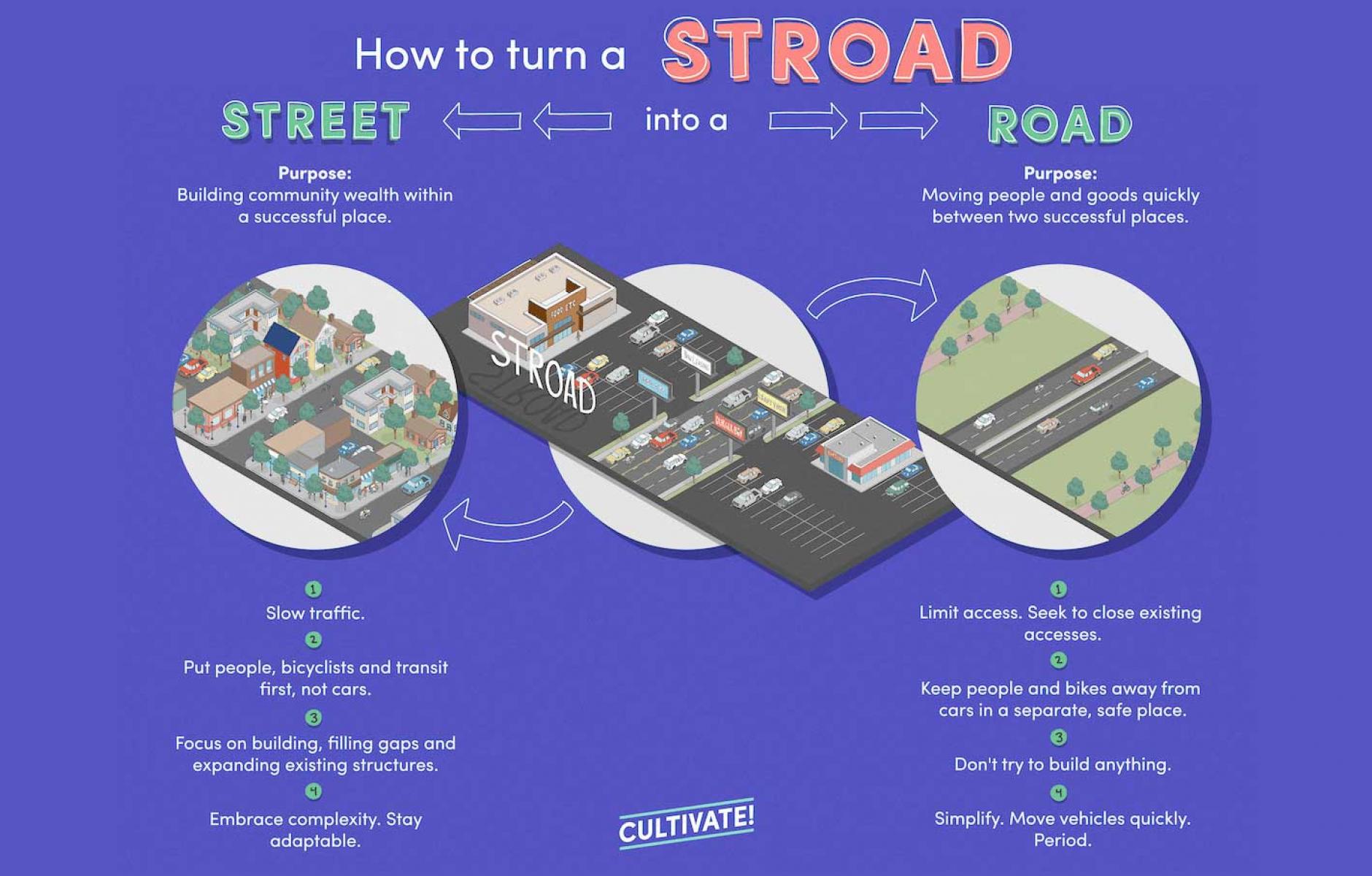 Turning a ‘stroad’ into a street

“Stroad” is a term coined by Strong Towns’ Chuck Marohn to describe the poorly designed commercial streets found in conventional suburban environments across America. These thoroughfares are part street, part road, hence the name stroad, and perform neither function very well. Redesigning such thoroughfares is critical to retrofitting suburbs and making them more sustainable.

This process is difficult, because it involves both buildings and public infrastructure—but it can be done incrementally over time. It’s less about capacity than design. Recently, Marohn addressed a question from a reader who suggested that it would be impossible to fix the conventional suburban arterial below, because the thoroughfare will always need two lanes in each direction and there is no room for slip lanes—like in a Parisian boulevard.

We don’t have traffic counts for this street, so we can’t verify the assumption about travel lanes. Nevertheless, what makes a stroad is not volume of traffic. As the image at the top of this article shows, the key task is to slow traffic and give highest priority to walking, bicycling and transit—not cars.

How do you do that? It may involve narrowing traffic lanes, reconfiguring those lanes, planting shade trees, and adding on-street parking and/or crosswalks. Maybe the center turn lane could be eliminated or shortened. The intersections could be made smaller through a variety of techniques, reducing crossing distances. Sidewalks could be widened and other changes made to the public realm. Modern roundabouts could be installed. There’s a whole toolbox of design choices that could be employed in more combinations than I could possibly list. The redesign may be accomplished with paint, or through more permanent means (in tactical terms, that may mean repainting in the short term, full reconstruction in the long term).

A transformation may or may not be a priority on this particular thoroughfare. But thousands of sections of stroad around the US could be redesigned.

Once the street is redesigned, the focus is on filling gaps in the urban fabric. Bring buildings closer to the street, and let buildings define the public realm. Whereas a stroad has little or no sense of enclosure, a street should feel like an outdoor room. Shifting the location of buildings will likely require a change of zoning to allow more compact development closer to the street.

This transformation is not going to take place overnight. And it is most likely to begin with the public infrastructure. Developers are less willing to bring buildings close to the street if the traffic on the street is moving at a speed that is uncomfortable to pedestrians. When traffic moves more slowly, buildings are more likely to begin to define the public realm—if that is legal through zoning.

As the graphic suggests, the stroad can also be converted to a road. That is possible through limiting access to the thoroughfare. It’s more likely, and usually makes more sense in the suburbs, to convert the stroad to a street. Such transformations are needed in order to create more compact, mixed-use places.