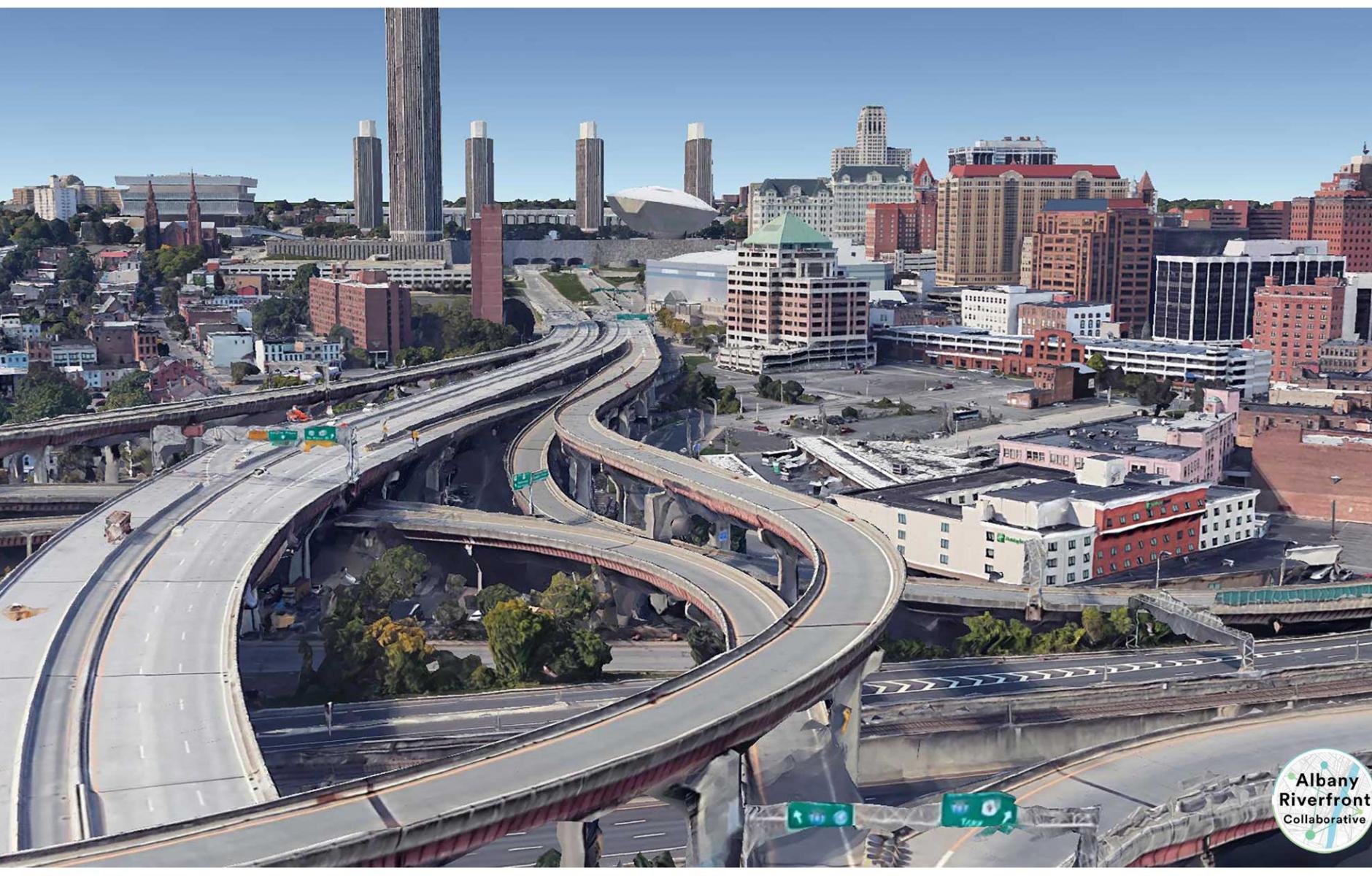 Envisioning Albany, without the waterfront-blocking freeway

It’s hard to imagine a highway that damages a city more, and serves a less noble purpose, than Interstate 787 in Albany, New York’s capital. This highway segment does not carry Interstate through traffic—it was built so state workers and legislators could quickly enter and exit the Empire State Plaza, a Brutalist office complex that landed like a spaceship and displaced 7,000 residents in the 1960s.

The Empire State Plaza obliterated a neighborhood, but the damage was less than that of the highway, which blocks the city’s entire waterfront and cleared 100 acres. The state workers were freed from having to experience the city, which was degraded by the enormous elevated overpasses, complete with a freeway arm (South Mall Arterial) that penetrates the heart of the city.

As a result, the population of this small city dropped by 28,000 in the 1960s and 1970s. Because the highway serves state workers, who have power over highways, long-term dreams of removal have so far gone nowhere, according to a recent Bloomberg CityLab report.

But now the political winds may be shifting. A growing number of cities, including several in Upstate New York, are removing redundant or unnecessary freeways that damaged the urban fabric. Rochester, which removed a section of the Inner Loop, spurred a great deal of downtown revitalization and is moving forward with more highway demolition. The recent federal infrastructure bill included $1 billion for freeway removal, including plentiful funds for studies.

Meanwhile, a new organization called the Albany Riverfront Collaborative launched an impressive I-787 removal campaign. Its website, which went live a few days ago, is persuasively designed and written, with compelling photos and renderings and a polished video on the history and opportunities of removing this freeway. Most impressive is the list of 34 contributors, including a state assemblywoman, representatives from the city, the downtown BID, the industrial development authority, the planning board chair, businesses, foundations, architects and planners, and others. This is a campaign that may have the political depth to get something done.

At one point in the video, a basic plan is outlined: “Albany Riverfront Collaborative is proposing a plan that will remove the overbuilt Exit 3 interchange. The South Mall Arterial and 787 would become boulevards that intersect with the city’s grid system. Pedestrians will be able to cross the boulevard at many points, providing uninterrupted access to the Hudson River. The train that runs between 787 will remain, and infrastructure will be built to make it safe to cross.”

I’m not sure who could look at these images and not be at least intrigued at what Albany could become without I-787, especially the addition of 4.2 miles of accessible riverfront, 6,500 trees, $302 million in fiscal benefits, 3,143 jobs, 6 million square feet of residential and commercial development, and all of that new green space.