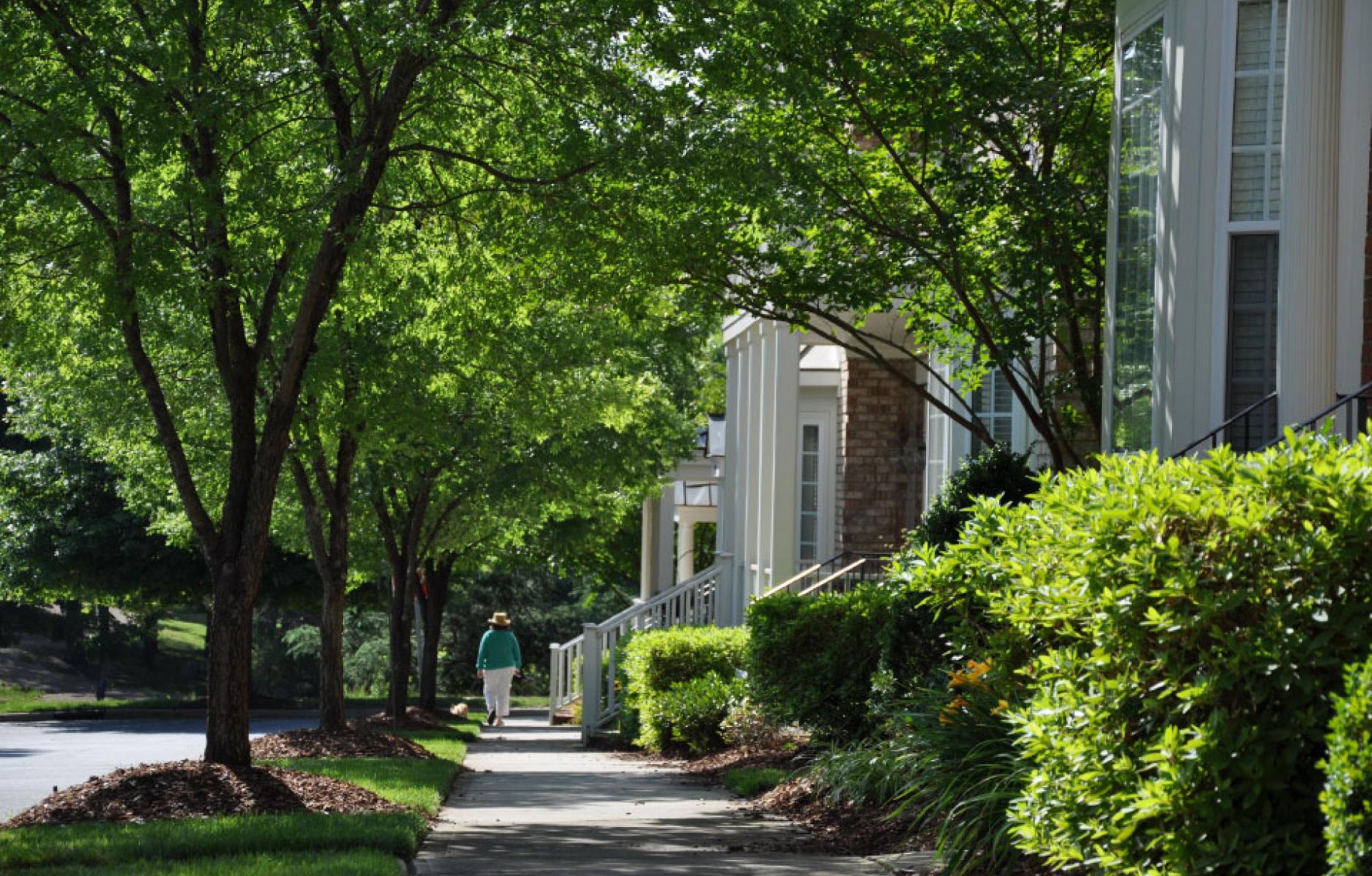 Street trees have many benefits, but their climate impact is becoming more important all the time.
ROBERT STEUTEVILLE   &nbspOCT. 19, 2021

Urban trees are among the most powerful tools that designers can use to help communities both mitigate and adapt to climate change. Trees are like outdoor air conditioners that operate as carbon sinks.

The cooling impact of a single healthy tree from evaporation and absorbing sunlight “is equivalent to ten room-size air conditioners operating 24 hours a day,” according to the US Department of Agriculture.

Planting urban trees “is an appealing, low-tech, time-tested practice that sequesters CO2 and reduces air pollution, soil erosion and stormwater runoff, not to mention providing oxygen, habitat for small animals, shade in the summer, and more,” writes Doug Kelbaugh in The Urban Fix (2019).

Street trees are cost-effective, too, because they also offer multiple health, safety, and economic benefits to cities and their inhabitants (here and here are other reports on this subject). Urban trees pay for themselves many times over. Jeff Specks writes in his classic Walkable City, “It’s best not to pick favorites in the walkability discussion—every individual point counts—but the humble American street tree might win my vote.”

The bad news is that the US is losing its urban tree canopy at a rate of 175,000 acres per year, according to a 2018 study in Urban Forestry & Urban Greening. That amounts to about 36 million trees per year.

“This is happening at a time when the country needs street trees to save energy by providing shade, to cool air as leaves evaporate water, reduce storm water runoff, reduce flooding, clean water prior to its return to aquifers, improve air quality by absorbing carbon dioxide and other pollutants, and, in general, make life on Earth more pleasant,” explains Jason King in his recent book, The Climate Planner. “The loss of street trees is happening for many reasons, including lowered code requirements, inadequate maintenance, and a well-meaning desire to give street trees more space to grow than the urban or even suburban realm allows.”

Sometimes the problem is made worse by bureaucratic rules. King reports that the City of Laredo, Texas, established a rule that no tree would be planted within four feet of the street, with the reasoning that the roots of trees might damage the pavement. Laredo is one of the hotter cities in the US and will desperately need shade in coming decades. Furthermore, studies have shown that the shade of street trees helps asphalt to last longer. The rule makes planting street trees difficult in Laredo, because that kind of room is rare between curb and sidewalk in that city (and most cities). Street trees could just wane over time as some die and new ones are not planted. Planners are seeking a code update to change that rule.

The US Department of Agriculture’s Right Tree Right Place campaign produces beautiful posters of local shade trees and restricts those same trees in just about every area other than the centers of backyards in fear that those trees might interfere with telephone lines and power lines, King writes.

Among the campaign’s casualties: Coral Gables, Florida, a city with a magnificent history of street tree stewardship, “was reduced to planting several hundred dinky foxtail palms along its otherwise grand and centrally located SW 57th Street because of a telephone line that happened to sporadically line parts of the roadway,” says King.

Urbanists should push back against such one-size-fits-all rules, and instead promote guidelines that are adaptable to context. Spend a little time noticing street trees in your city, or traveling by street view on an Internet browser. You will find tall, mature trees in cities with great tree canopies often growing within one foot of pavement. These trees may occasionally cause problems, but their benefits are tremendous and rising by the decade. In other neighborhoods, wide boulevard strips provide more arboreal room, but don't make the perfect the enemy of the good.

Many cities have goals and programs to plant tens of thousands of trees. Seattle plans to increase its tree canopy from 18 percent to 30 percent over the next 30 years. Washington DC has incorporated a city-wide tree canopy goal of 40 percent of the city’s land area. Chicago plans to plant 75,000 trees by 2026. “This is the largest urban forestry program the City of Chicago has ever undertaken. And it’s critically important,” said Robert Megquier, Executive Vice President of Openlands, one of the largest environmental organizations with a license to plant trees in Chicago.

Philadelphia is implementing an impressive and replicable program to promote trees, called Tree Philly. The plan calls for 30 percent tree canopy in every Philadelphia neighborhood. The neighborhood-by-neighborhood goal ensures that areas of the city with fewer trees—often disinvested, poorer neighborhoods—will get special attention. The program appointed “community ambassadors” to work with local residents, coordinating with the planning department.

More than 9,000 Philadelphians have volunteered to help place street and yard trees, and the program planted more than 21,000 trees to date on public and private land. In a funding model that other cities could emulate, the city recruited both corporate and nonprofit partners. TD Bank committed $1.125 million over three years. The Philadelphia Horticultural Society sponsors teams to plant trees twice a year. Philadelphia Parks & Recreation and Fairmount Park Conservancy are both involved.

Mid-sized and smaller cities may also increase their canopies. Montgomery, Alabama, began planting trees in their downtown according to local plans, King notes.

Street trees have long been a key tool to improve quality of life and real estate values. Now they have a new public purpose: To address climate change. Many strategies for climate change address either mitigation (global plans to reduce emissions) or adaptation (helping communities to be more resilient to impacts of climate change). Trees help cities to mitigate and adapt.

Maybe the best quality of trees is that anybody can plant one. Toward that end, King suggests that citizens bend the rules if necessary. “Plant one tree in the street and one in your backyard this weekend,” he says. “If the City says there is a rule against this, then pay the fine and politely ask the City to change the rule.”