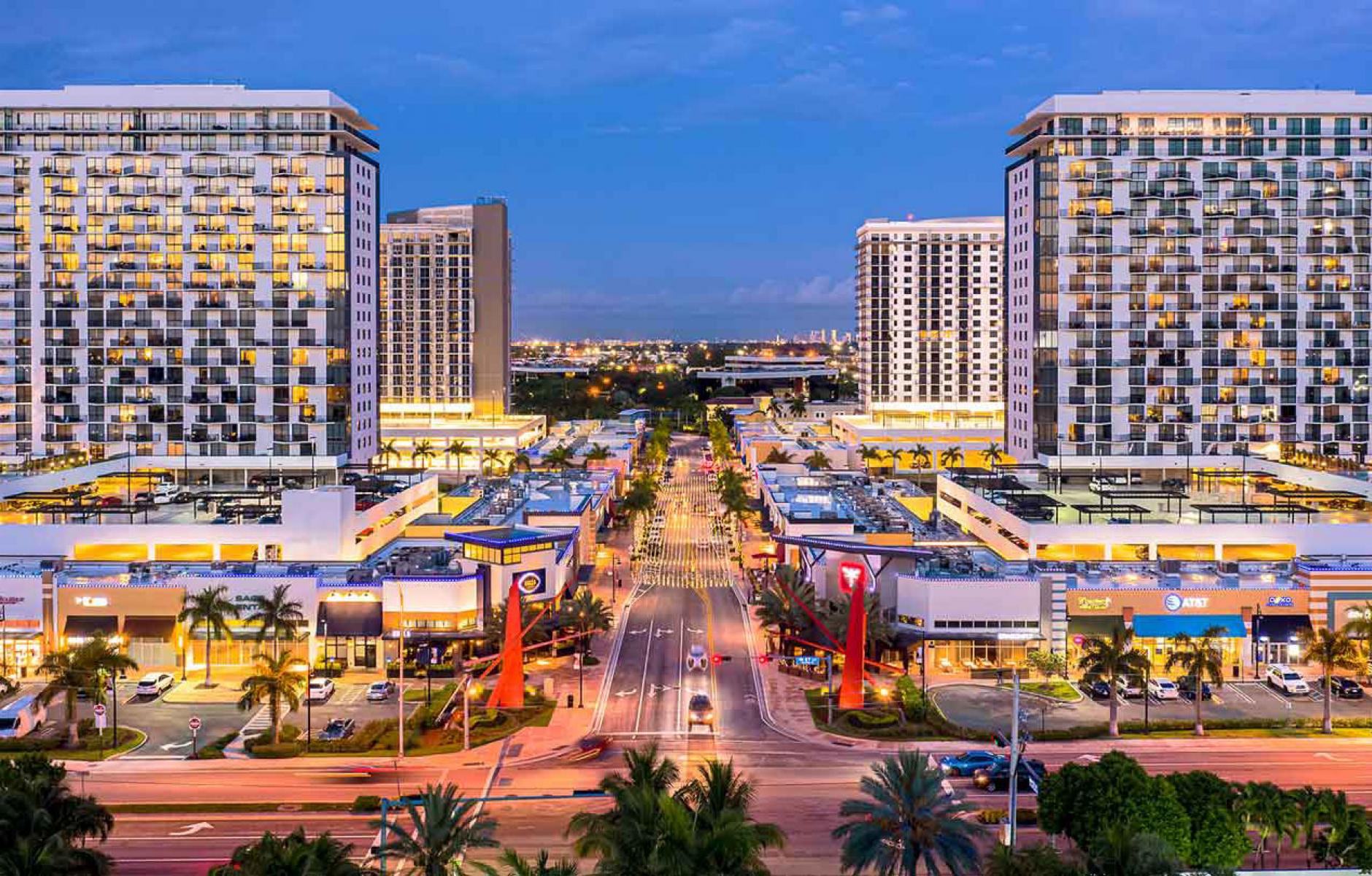 Office park redo is a model for mixed-use

Downtown Doral in Dade County, Florida, shows how a 1970s business park can be become a mixed-use downtown while retaining some of the old buildings and infrastructure. The project avoids a “blank slate” approach to transforming a single-use, automobile-oriented place, that would appear to be a challenging retrofit.

“This neighborhood represents the greenest way to build, by a retrofitting a previously-developed property,” according to DPZ CoDesign, the master planner. “The plan of Downtown Doral keeps part of the former office park and repurposes the rest, preserving the main roadways and underground utilities.”

Downtown Doral is 75 percent completed on a site that had 33 buildings and 1.5 million square feet of office space on 120 acres. The site had no sidewalks, parks, transit, or mixed-use, and the peak hour traffic was terrible. By the mid-2000s, the buildings no longer met code or appealed to the market. Since 2008, five buildings were refurbished—which helps to maintain a revenue stream—and the rest are being replaced with a new urban center center.

The project includes 2,480 residences, and more than 1 million square feet of commercial space in phase 1, plus an additional 2,000 living spaces, 800,000 square feet of office and 300,000 square feet of retail in phase 2. The development includes a a popular Charter School, Doral’s City Hall, and a future library. Developers calmed traffic and installed sidewalks, broke up superblocks with new streets, and built public spaces.

Doral, a community with 80 percent Hispanic population, the highest in the nation, now has a city center where none existed before. “This project represents the repurposing of a dying office complex into nothing less than the urban downtown for a sprawling suburban community 10 miles west of Miami,” notes DPZ.

Unlike many urban centers that target single young adults, developer Codina Partners is focused on attracting families by assembling key civic and commercial components: a good elementary school, a full-service supermarket, an urgent care center, a range of for-sale and rental housing choices, parks and open space, shops, and restaurants in a walkable environment.

Formed in 2003 from unincorporated Miami-Dade County, Doral never had a pedestrian-oriented core. The area consisted largely of subdivisions, shopping centers, a warehouse district, and office parks—linked by busy arterial roadways. The plan for the outdated office plan grew out of a 2005 charrette, and development of Downtown Doral began in 2008, at the start of the Great Recession. Public-private partnerships helped to keep the project going. These included the city hall and charter school.

“By 2012, a neighborhood of townhouses near the school took shape and shortly thereafter were joined by the first of four high-rise condo towers. Surrounding the towers, a detached, flexible layer of single-story retail framed the paseo greenway and the Main Street,” notes DPZ.

A large-format supermarket was built—breaking suburban retail practice by not fronting a major artery.

Key to success for Downtown Doral was keeping the plan simple, says DPZ. That approach includes a basic grid of streets and lean coding. The regulations emphasize key moves to make a pedestrian-friendly place—such as location of parking and mandatory liner buildings that hold the street edge.

Downtown Doral could be a model for other suburbs in the US. NAIOP, the national commercial real estate development association notes: “The substantial supply of aging office parks and growing millennial migration to the suburbs suggest that office park redevelopment will remain an effective strategy for the foreseeable future.”