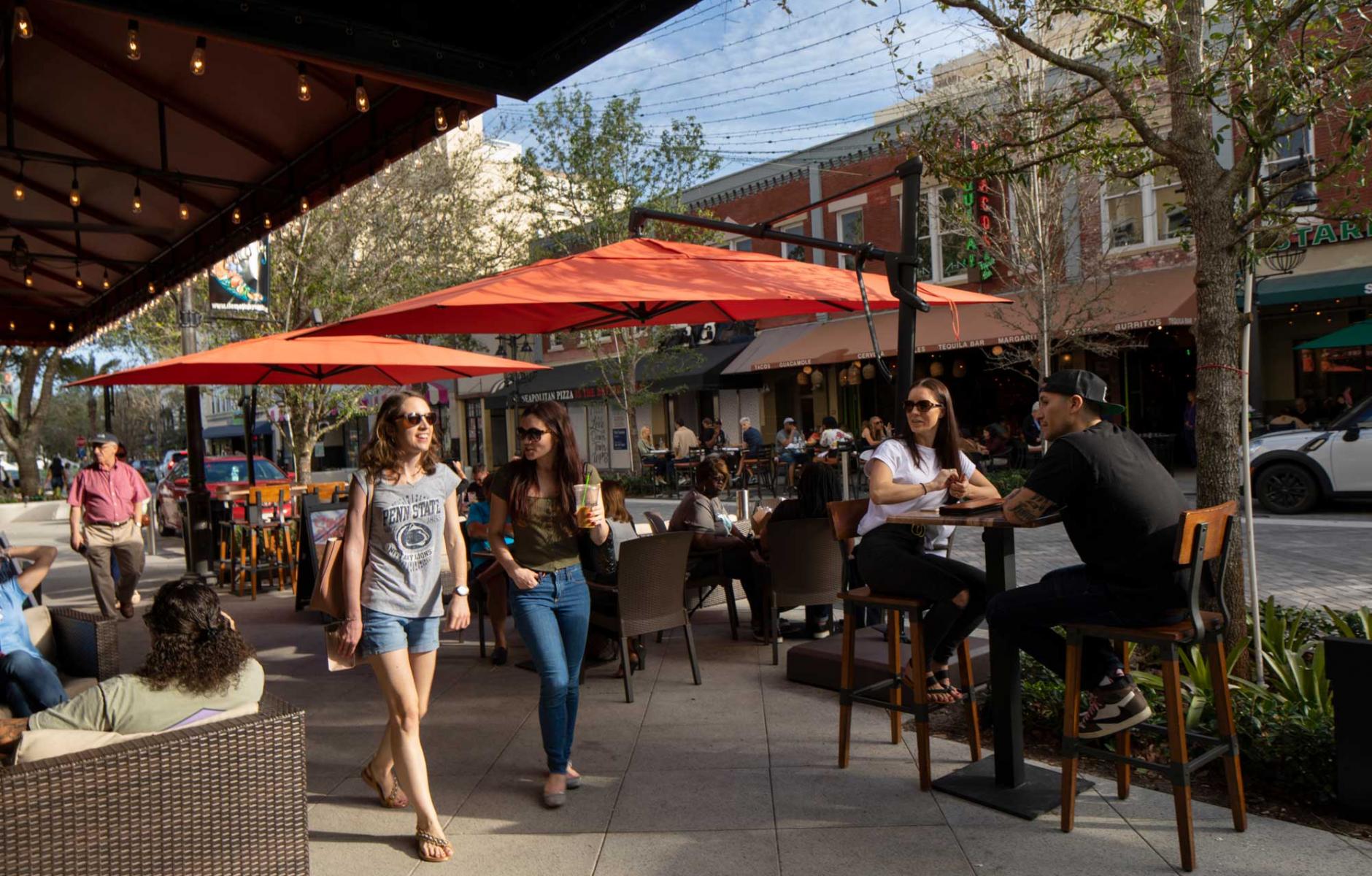 The rise of pedestrian-first streets

The woonerf is coming of age as a thoroughfare type, allowing streets to take center stage as public spaces.
ROBERT STEUTEVILLE   &nbspMAY. 26, 2021

Call them “woonerfs,” or “shared space,” these are skinny streets where motor vehicles may be allowed—but play second-fiddle to human-powered transportation. These streets often have no vertical curbs and are designed so that drivers feel comfortable only going very slow—5 or 10 mph.

“Blurring the boundary between street and sidewalk, woonerfs combine innovative paving, landscaping and other urban designs to allow for the integration of multiple functions in a single street, so that pedestrians, cyclists and children playing share the road with slow-moving cars,” according to a 2004 Salon article—still a good definition.

As the quote shows, such streets have been around for a while, but recently they have become a more widely accepted transportation planning tool. For a long time, these streets were largely the dreams of urban planners—at least outside of the Netherlands and a few other European countries. In the last year or two more of them getting built around the US and beyond.

The redesign of Clematis Street in Downtown West Palm Beach, Florida, provides a good example (see photo at top). Until recently, this was a fairly typical main street. “Past upgrades and thoughtful management helped spur a revival of Clematis Street starting in the early 1990s,” according to designers Dover, Kohl & Partners. “As the street and its role in the city evolved, however, it became clear that more improvements were needed. Despite the completion of a new passenger rail station steps away from Clematis in 2018, the street’s outdated design, narrow sidewalks, and lack of shade had been dampening the success of retail, restaurant, and commercial tenants.”

Dover, Kohl worked with the city to take the downtown to a new level with a shared-space design. The 5-block-long transformation is home to a diverse array of civic buildings, restaurants, apartments, offices, shops, and bars connecting downtown to the waterfront. Completed in 2020, the transformation served a key role during the Covid-19 pandemic, because the city was able to close off the entire street, creating space for outdoor dining and activities. The city can do the same during special events in normal times. Even without closing the street, Clematis is far more pedestrian friendly, allowing for more outdoor activity.

Another recent example is Kirkpatrick Park (see photo above), a public housing development designed around a central woonerf. This pedestrian-oriented street offers safe play and gathering space overlooked by front porches, stoops, and balconies. The woonerf gives Kirkpatrick Park a unique identity. Although cars navigate and park on the street, they travel slowly and the space is designed for people on foot and bicycle. The narrow entrance and ramp brings the woonerf up to sidewalk level, clearly differentiating it from the surrounding street network.

A large new urban development in Guatemala city, Cayalá, has pioneered the local use of shared space in thoroughfares. Techniques like eliminating sidewalk curbs, for same-level spaces, create a culture of respect and good behavior among drivers and pedestrians. Shared space has been so successful that there has been little-to-no need for speed limits signs, the design team reports.“Cayalá is nothing but shared space,” notes Geoff Dyer, an urban designer who chaired the 2021 CNU Charter Awards. “It’s typical Leon Krier.” Several projects with woonerfs won awards, including Kirkpatrick Park and Montgomery Park Master Plan, an adaptive reuse development in Portland, Oregon. Montgomery Park will guide the redevelopment of iconic industrial buildings on a 17-acre site, and is designed around a new shared-space street. Pedestrians will be given primacy in the curbless thoroughfare.

Dyer dubbed a development called Cul-de-Sac in Tempe, Arizona, “woonerf heaven.” Cul-de-sac actually removes cars from nearly the entire new neighborhood, and the streets are reserved for both human-powered transportation and small electric vehicles. The removal of cars allows for a porous, fine-grain urban pattern with a network of narrow, shaded, pedestrian-only paseos, intimate courtyards, and a central plaza activated by restaurants, a small grocery, a co-working space, and a coffee shop. See the network of paseos below. They are designed as streets, with “eyes on the street,” just not for conventional motor vehicles.

As these examples illustrate, there is no one design for a woonerf, shared-space, or pedestrian-first street. They are typically narrow, often curbless, use a variety of paving materials, sometimes quirky with varying width. Landscape features, street furniture, and/or on-street parking is close to traffic, forcing drivers to pay attention and drive slowly. The offer a great deal of freedom to designers to create striking and appealing public spaces. The streets themselves are designed as important public spaces.