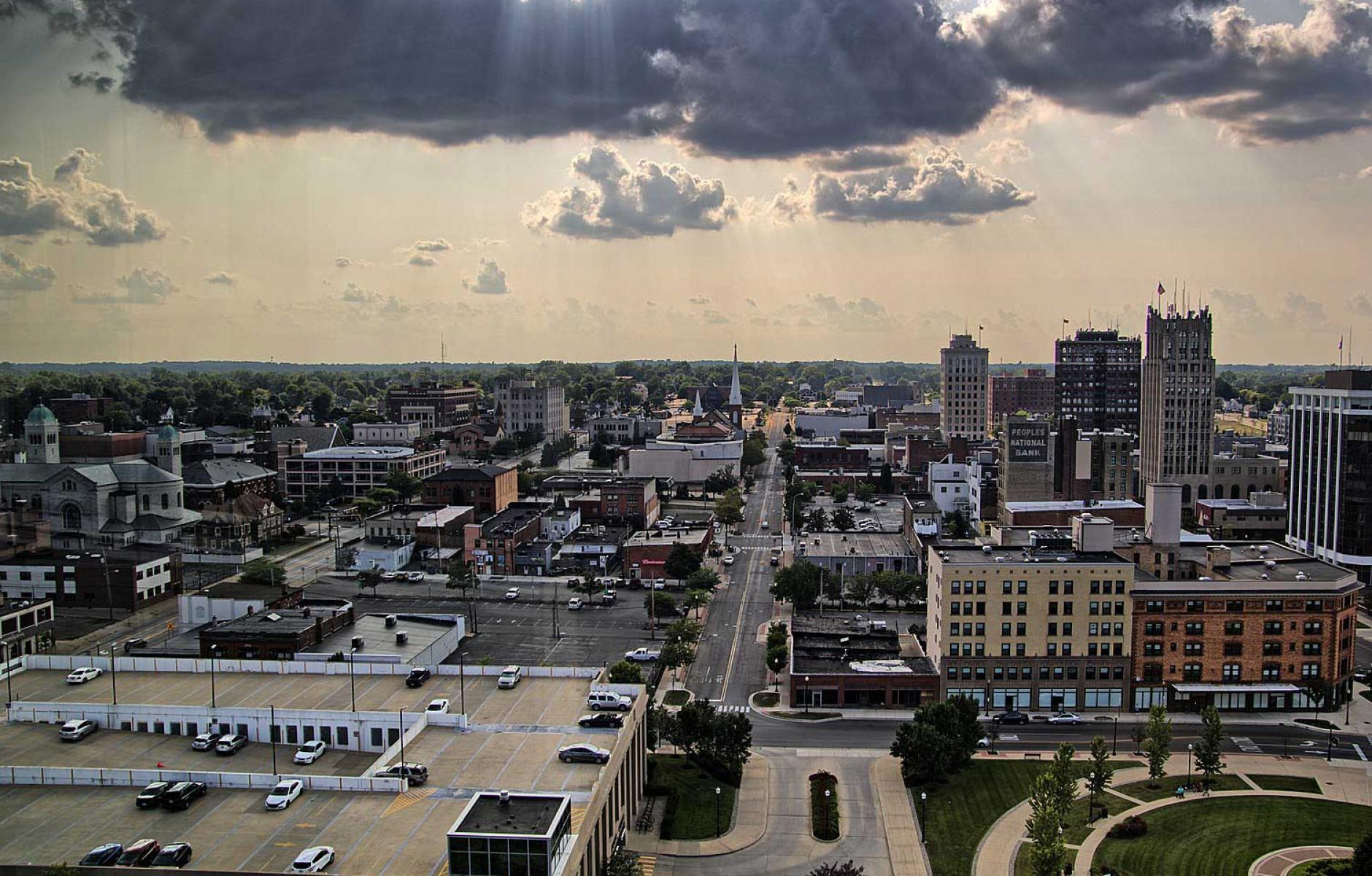 The Project for Code Reform looks at Michigan municipalities to find the key changes to land-use regulations on the local level.
ROBERT STEUTEVILLE   &nbspAPR. 13, 2021

CNU Project for Code Reform faculty recently met with six Michigan cities and towns, ranging in population from 2,500 to 42,000, for training workshops. The team is made up of experts in finding the straightest path to solving a municipality’s problems through targeted land-use regulatory reforms.

The municipalities include Midland (population 42,000), Jackson (34,000), Mason (8,000), Frankenmuth (5,000), St. Ignace (2,500), and Meridian (42,000), representing many geographic parts of the state, including the Upper Peninsula. They had one thing in common: Land-use regulations are failing, to one degree or another, to meet planning visions and growth needs.

The regulations often deliver the kind of development that residents do not want, but prevent places that are most loved from being built again. They pose unnecessary barriers to economic growth. They restrict kinds of housing that are needed—often “missing middle” types at a mid-level density between single-family detached homes and apartment complexes. Parking and stormwater regulations are misaligned with community goals.

Many of the municipalities—especially Meridian, Mason, and Frankenmuth—are troubled by commercial strip development that lacks sense of place or walkability. In some cases, residential is not allowed to be built in a commercial zone—and that is a relatively simple fix. Permitting residential by right in commercial zones may jumpstart reinvestment and diversify a single-use area. This change represents an expansion of property rights, which should elicit support of property owners. Some of the problems stem from practices that set buildings back behind parking lots. Three steps detailed in a recent Michigan zoning guide by CNU are critical:

“If you did those three things it wouldn’t be perfect architecture, but it would go a long way toward where you want to be,” Henderson says.

A build-to zone is important, especially on a corner lot. When a building hugs the corner, a street edge begins to form on both sides of the street.

Suburban municipalities often fear density. Lambert suggested calculating density for the district, rather than the lot, to allow targeted residential without overwhelming the area. When small changes are made that are proven beneficial, officials have confidence to make more changes.

St. Ignace, a small resort town on the Upper Peninsula, needs more housing. A large number of what used to be primary homes have been lost to second homes and short-term rentals. St. Ignace needs lean, small-scale interventions. Suggestions were made to allow accessory dwelling units (ADUs) and other missing middle types on individual lots. Single-family houses on large lots can easily accommodate ADUs without any outward change in streets and blocks. Also, houses bigger than a certain square footage could be permitted to become duplexes. That doubles the density of an individual lot while retaining the current built form. Four-plexes may also be built with designs that are indistinguishable from single-family housing.

When allowing ADUs, the regulations should be as simple as possible. The fire code handles separations: There is no need to duplicate regulations in the zoning. The city could set a maximum size of ADUs of 650-800 square feet, no more than two bedrooms, or as a percentage of the main house.

Jackson, a city located about 30 miles west of Ann Arbor, sets minimum off-street parking requirements that sometimes prevent the reuse and revitalization of historic main street buildings and lots. The city standards call for five spaces per thousand square feet of retail (more than Walmart provides, as one faculty member pointed out). Requirements for restaurants are high. The goal is to spur development of nodes along Michigan Avenue, the city’s main street, which radiates northeast from downtown. Capacity for nearby street parking is underutilized. On-street parking should be counted toward whatever parking requirements are imposed, the team recommends. If buildings are constructed prior to 1950, the city could stipulate that they are not subject to more parking upon change of use. Or, set one parking requirement for commercial, and help businesses find capacity, so that a change of use in a historic building does not trigger additional spaces. Or, don’t require businesses under a certain size to provide parking. The city could add diagonal parking on some side streets (this doubles capacity).

Mismatch with what people love

Mason, a city near Lansing in the south-central part of the state, has a historic courthouse area that everybody loves. Buildings in that district tend to not conform to current regulations, and yet zoning promotes commercial strip development on Cedar Street, about a mile away.

The city wants to preserve its small-town charm. “Mason’s historic area is so clear and coherent,” notes Henderson. “But the corridors [like Cedar] are typical, they could be anywhere in North America.” The historic neighborhoods need protecting, but the commercial strip could benefit from relaxing some standards to allow for compact, mixed-use development. The public discussion could be framed in the following way: “Our rules don’t allow the part of the city we like to be built anymore, so this is what we need to change.”

The team explored barriers to urban development in the City of Midland—such as stormwater rules designed for suburban areas but applied to redevelopment sites. A distinction should be made between a retrofit and greenfield development. When a site is already close to 100 percent impervious surface (including the building and parking lot), no development will increase stormwater from the site. A change of use should not trigger a stormwater permit.

Requiring that new buildings must be two stories in height—often imposed to promote street enclosure—may pose a barrier to development.

Also, parking requirements may hinder missing middle housing. “If you can’t get the parking on the lot, then you are dictating the number of units. It doesn’t matter how flexible you are on types of units,” notes Christina Anderson. The team suggested that Midland change from requiring 1 parking space per bedroom to 1 per unit (if they are kept parking requirements). If a single mother with two children lives in a three-bedroom unit, she would be required to have three parking spaces—and that’s excessive. Midland doesn’t allow overnight street parking—which increases the off-street parking that is needed. It was suggested that the city test a change in this policy in a specific geographic area, and closely monitor the results.

Connectivity of streets, a critical step to walkability, is missing in the commercial strip parts of many municipalities. That issue can be addressed with maximum block lengths. There’s nowhere to put a sidewalk if streets are not required every so many feet. The street connectivity should be built before utilities, and sidewalks, are installed.

Frankenmuth has some significant parcels that could be developed into a walkable neighborhood, but without streets, the parcels are disconnected from the main road.

A dirt road behind Frankenmuth’s Kroger supermarket could be made into a public right-of-way and improved—providing access to land behind. Other potential locations for through-streets would begin to create a connected network of streets. Providing for cross-access between parking lots helps in consolidating driveway entranceways and allows drivers to navigate the area without congesting the main road. “When you have no interconnected streets, it’s a heavy lift to do anything with incremental code reform,” says Mary Madden.

Jackson wants to connect nodes on Michigan Avenue, the city’s main street, and make the street more walkable, notes Adam East, senior planner for the city. The area does have a grid of streets, but the thoroughfare is marred by surface parking lots and other underutilized lots. There are two nodes, within a mile, northeast of downtown.

The avenue has walkable structure, but the street is too wide. If a parcel abuts Michigan Avenue, it should be treated as primary frontage in the code, so the business puts an entrance on Michigan Avenue. It was suggested that the city consider an “A” and “B” street strategy. That enables high standards for walkability on “A” streets. Michigan Avenue is the street that should have the highest standards.

Henry Ford Allegiance Health, a hospital, is located on Michigan Avenue, about seven or eight blocks from downtown. Large parking lots around the hospital affect walkability. The city has designated the surrounding area a medical district, and it could be the site of residential development to serve hospital employees. The city could encourage missing middle housing through its code. The hospital is always looking to have more parking, but open to shared parking.

Some municipalities are working on form-based codes (FBCs) to apply to small geographic areas. In Meridian, a FBC under consideration is centered on Grand River Avenue, a state highway with drive-throughs, fast food, and other automobile-oriented uses. This area is ripe for redevelopment, notes Amber Clark, neighborhoods and economic development director for the township. The municipality is looking to create a main street.

The base standards of FBC don’t need to be heavy, notes Matt Lambert. There’s no need for architectural design standards, for example. The suggestion was made to apply the FBC to an even smaller area, the area around a thoroughfare that is not a state highway—where it would be easier to pull buildings to street.

Frankenmuth has two areas, more than 50 acres combined, that amount to the largest developable areas in the city. The parcels already have water and sewer. The zoning ordinance calls for conventional suburban development. A FBC in this area could ensure compact, mixed-use development.

The needs of these municipalities vary greatly in their conditions and needs. The potential to reform codes to create more sustainable, livable development is high, but the changes must be carefully tailored to the needs of the community. Other municipal participants: