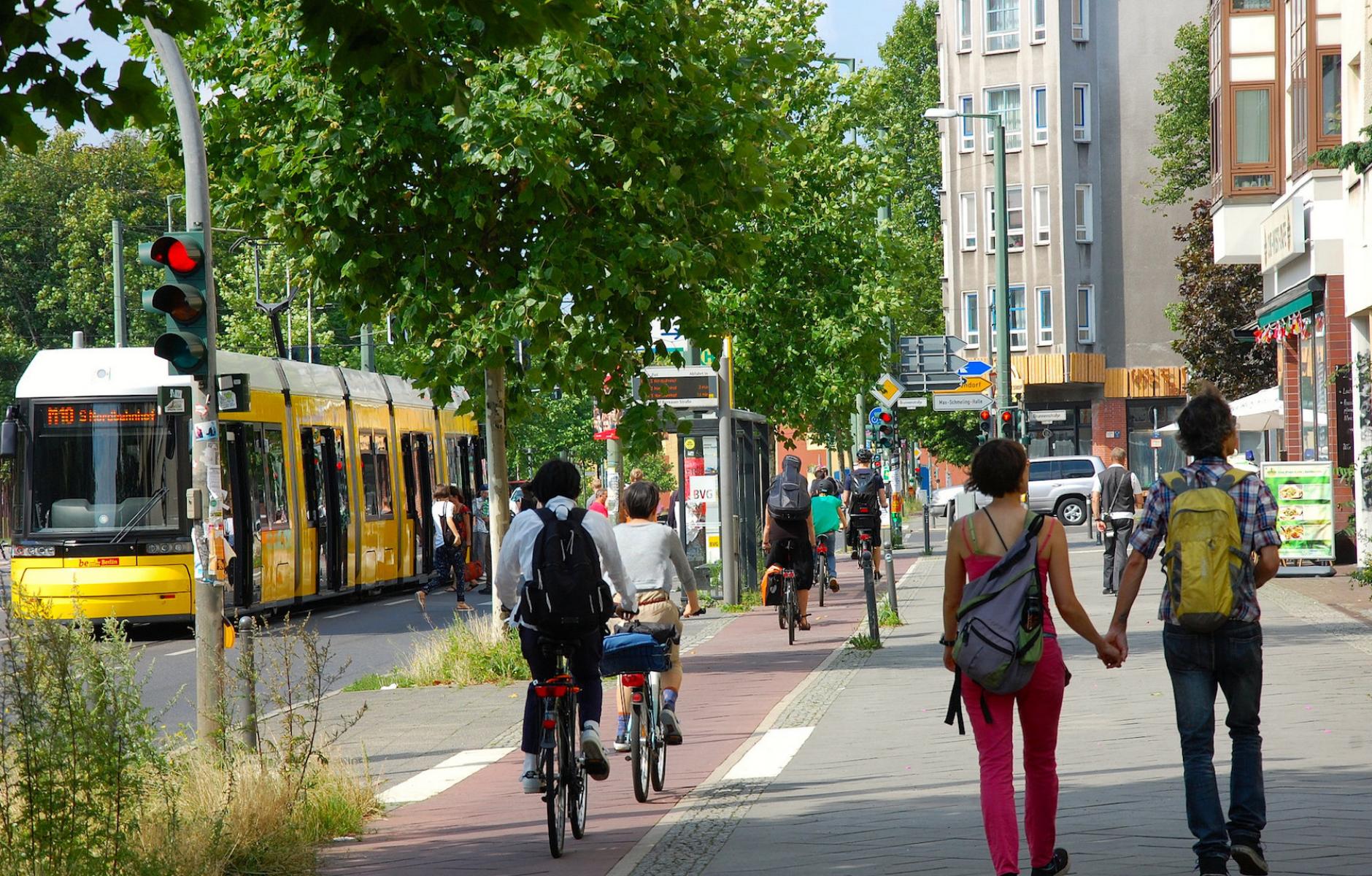 Living in a walkable community correlates to a significantly stronger reported quality of life—and that metric rose during the COVID 19 pandemic, according to a biennial poll on housing and transportation by the National Association of Realtors (NAR).

Less favorably for urbanists, two generations with children at home—Millennials and GenX—now want a bigger house and a larger yard. For Millennials, “This is a flip from February, when the majority preferred a smaller yard in a walkable community,” notes NAR. The findings may support a movement toward the suburbs that has been reported in many major cities since the summer of 2020.

The Community and Transportation Preferences Survey offers a unique perspective on housing and lifestyle attitudes in the US, and how these outlooks changed during the pandemic. The NAR, America’s largest trade organization with 1.4 million members, conducted the poll in February 2020 and then held off on releasing findings as the nation shut down in March. The organization was able to repeat the poll in late July/early August, which allowed for a before-and-during COVID analysis. The poll is based on 2,000 weighted online respondents.

Dissatisfaction with quality of life decreased only slightly during the pandemic. Overall, 80 percent of Americans are satisfied with the quality of life in their community as of July—down from 82 percent in February and 2017. Out of all of the five generations surveyed, Gen X and Baby Boomers report a slight rise in quality-of-life satisfaction. This was offset by Millennials and people 75 years of age and older, who report a 4-percentage-point drop. Gen Z, the youngest respondents who are up to about 20 years of age, report a 10-percentage-point drop in the quality-of-life metric. This generation has been cooped up, often kept out of in-person classrooms and unable to hang out with friends. 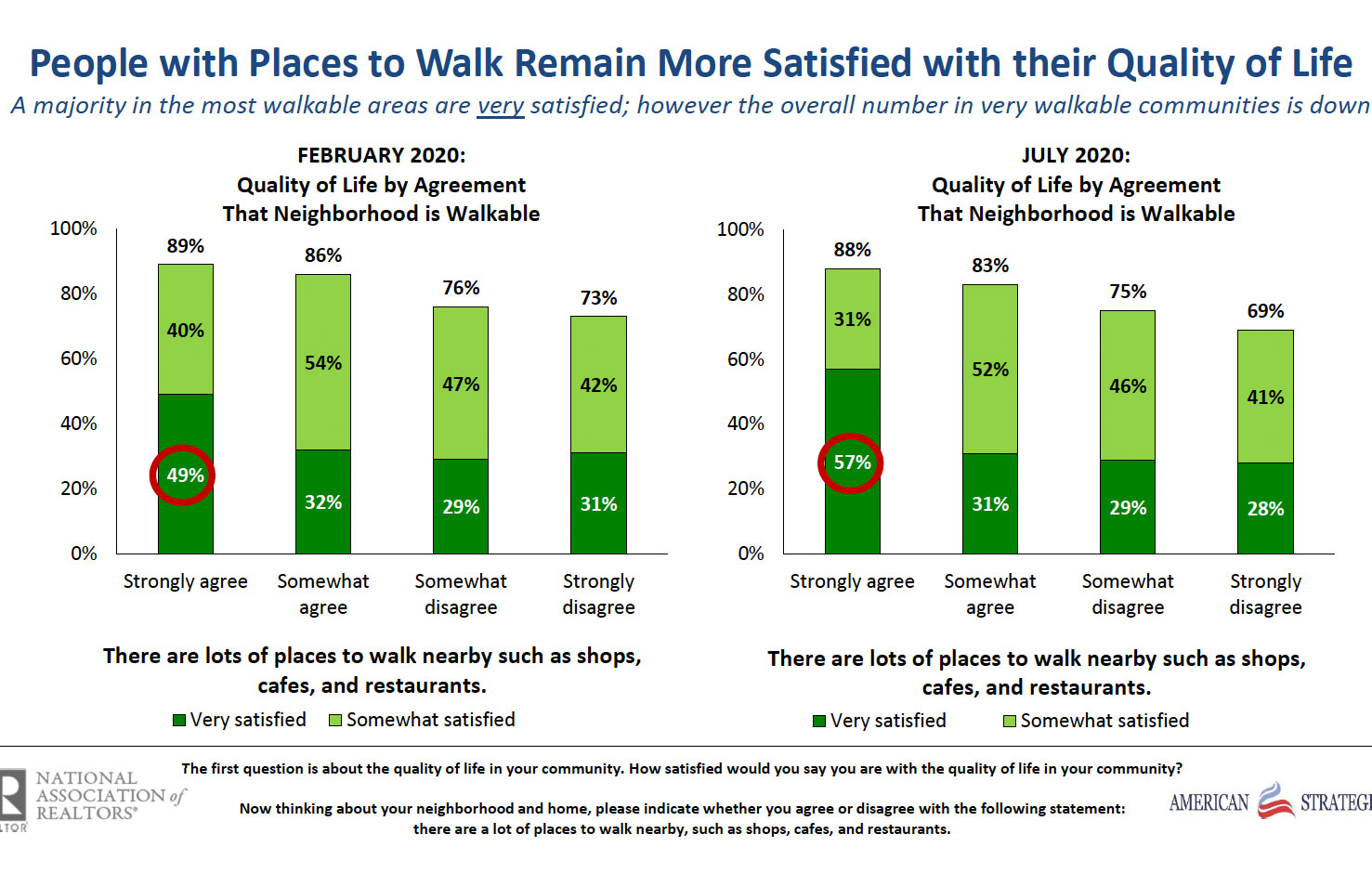 Many Americans really appreciate living in a walkable community during the pandemic. Of those who strongly agree that their community is walkable, 57 percent are very satisfied with their quality of life, and 31 percent are somewhat satisfied. That 57 percent not only rose by 16 percent from February to July, but also is far higher than the community satisfaction among those who disagree, or less strongly agree, that they live in a walkable community.

As NAR puts it, “People with places to walk remain more satisfied with their quality of life. A majority in the most walkable areas are very satisfied; however, the overall number [of people] in very walkable communities is down.” How to account for the latter finding? The poll points to the impacts of young people moving back with their parents, many of whom live in the suburbs. Only 59 percent of those age 18-34 report that they live in a community with a lot of destinations to walk to—down from 70 percent in February. These young adults will surely move out of their parents’ homes, and yet the stronger desire for a bigger house and lot may mean that some relocate to the suburbs.

The poll also found that respondents downgraded the importance of both highway access and location near transit. That’s not surprising; more people have been staying at home for most of the last year. From February to July, the poll shows a three-percentage-point drop in the number of people who say they like taking mass transit—a question that included both trains and buses (to 38 percent from 41 percent). Mass transit gained an unhealthy reputation from a contagion perspective. This shift was most pronounced among Gen Z and Millennials. The big question, from the point of view of the beleaguered mass transit industry, is how long these attitudes will last.

From the urbanist standpoint, the poll results are mixed. There positive indicators are as strong as the negative—maybe stronger. Three generations, from Gen X  to Boomers and those over 75, report a strong increase in their positive attitudes towards riding a bicycle. That bodes well for both health and active transportation. Furthermore, larger numbers of Gen Xers report that being within an easy walk to services is a very important factor in deciding where to live (five percentage point rise).

“Although COVID has dramatically changed people’s lives, this study shows that a substantial demand for walkability persists for Americans of all ages,” notes NAR President Vincent Malta.