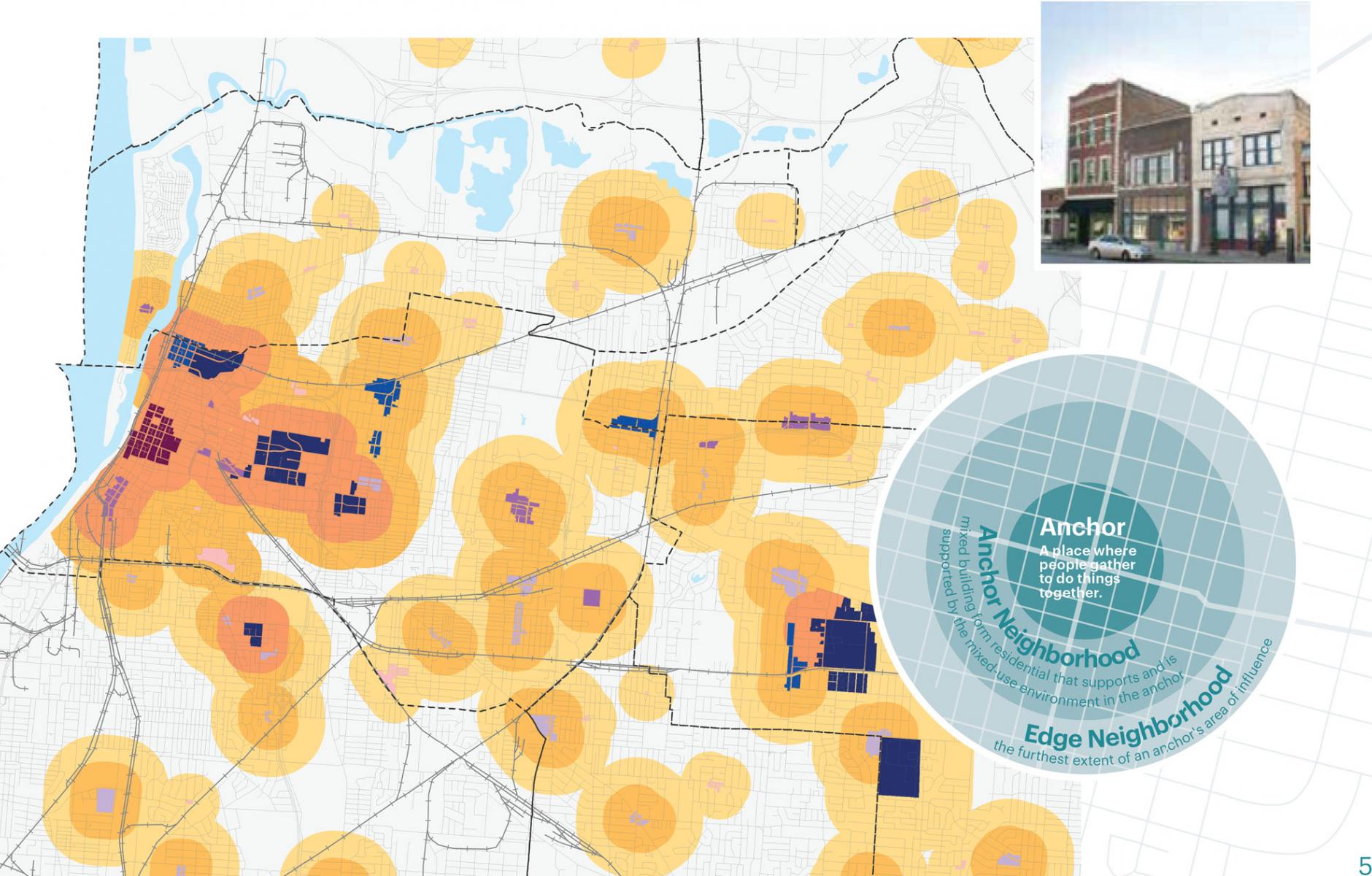 Memphis 3.0 establishes neighborhood centers where mixed-use development may occur incrementally, at different speeds, according to the context.
ROBERT STEUTEVILLE   &nbspJUL. 21, 2020

The Memphis 3.0 Comprehensive Plan was adopted in 2019 for 324 square miles and 650,000 residents, using mixed-use place types and walkable neighborhood centers to accommodate growth in a range of economic activities.

Prior to the plan, Memphis drifted along for four decades approving growth on a case-by-case basis, while the city sprawled and population stagnated, according to Opticos Design, key consultants on the new plan—working with the city and other urbanist firms. The old plan supported outdated models of growth that hollowed out the core.

The city faced a lack of available greenfield sites for development, a growing demand for urban living, and neighborhoods that are impacted by development proposals. Still other neighborhoods have seen little investment for many decades. Those challenges inspired a new model of growth that used community character as a basis for land use, focused on pedestrian-oriented environments (“anchors”), and a balance of desired physical form and anticipated investment in defining an anchor’s “degree of change.”

The Memphis 3.0 planning process began in 2016. Numerous public workshops and engagement events were held to develop Memphis-specific place types, a new land-use map, and policy recommendations. Community anchors, spread throughout Memphis, will accommodate new population and become more walkable simultaneously, in order to make the city more appealing and raise quality of life for residents. Memphis 3.0 is an infill plan, directing growth “up, not out,” and thus reversing the pattern of sprawl that has existed for more than a half century.

The anchors are located based on existing walkable patterns, but they also serve as aspirational visions for newer, automobile-oriented parts of the city. The land-use strategy directs meaningful change to the cores of communities that have experienced disinvestment. Many of these anchors have infrastructure that will support human-scale neighborhoods.

Corridors of natural areas also shaped the future vision. “The unique network of greenways in Memphis, which provide crosstown connections for people walking and riding bikes, also informed the land use plan and will connect neighborhoods and open space to strengthened and expanded mixed-use anchors,” according to the authors.

The anchors are categorized by their current context and pace of likely change. “Anchors are defined in terms of community character and three specific degrees of change over time: accelerate, for areas that can absorb growth more rapidly; sustain, for areas that have reached maturity in character; and nurture, for broad areas that have experienced disinvestment and need investment stabilization, support of community assets, and affordable housing,” Opticos notes.

The plan adopts a vocabulary for incremental change, especially in the “sustain” and “nurture” areas that will see slower growth. “Smaller change,” such as street trees, or turning a vacant lot into a community garden, could deliver early wins for communities and set the table for “bigger change,” such as new buildings or public spaces.

As a river city, Memphis grew up as a transportation and industrial hub. Logistics and manufacturing are still important to the economy and will be going forward. By providing a fine-grained spectrum of industrial uses and introducing a palette of street types, the plan offers a way to accommodate industry while allowing for walkability and human-powered transportation.

“Institutions such as colleges and medical centers also provide major employment opportunities, but are often isolated in auto-oriented commercial districts,” according to the authors. “The new land use plan envisions these institutions as anchors for walkable, urban mixed-use centers that support nearby neighborhoods and provide economic synergy to support complimentary economic activity and residential uses in a walkable environment.” One key area is the Memphis Medical District, a 2.6-square-mile area with eight anchor institutions, just to the east of downtown.

Memphis 3.0 is giving people and organizations a vision to work toward while building the capacity for partnerships to implement change.