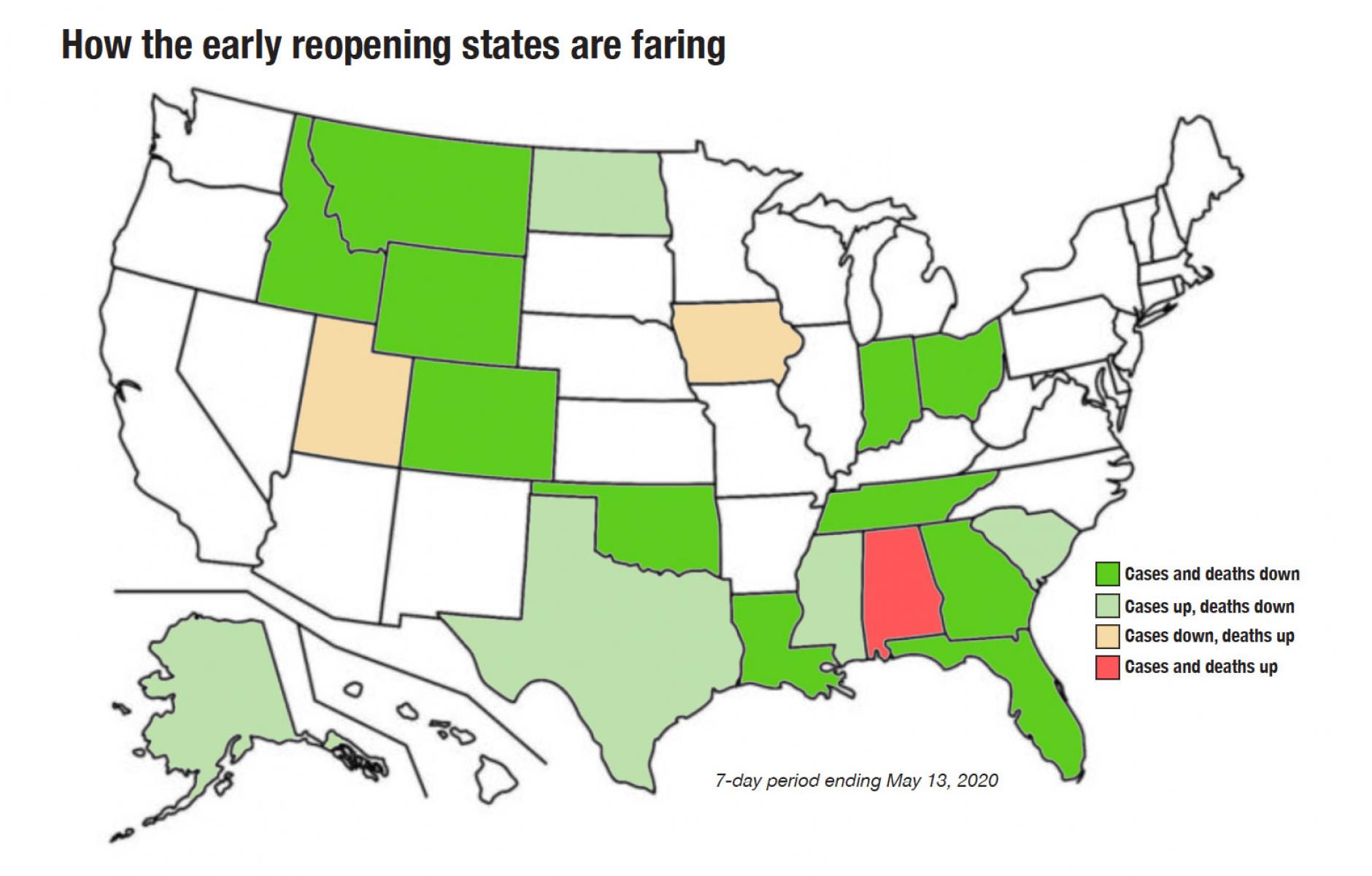 Good news on the pandemic: State of Coronavirus in America

Cases are down in the face of a big increase in testing. Mortality is also declining. These trends hold in the states that reopened early—as well as in the nation as a whole.
ROBERT STEUTEVILLE   &nbspMAY. 15, 2020

This past week has brought excellent news to report in the sixth State of Coronavirus in America (SoCA). Newly identified COVID-19 cases are down nationwide by 16 percent in the 7-day period ending May 13, in the face of another big jump in testing. Mortality is down even more—18 percent—in the recent week. The data source is Worldometer, which gets its figures from CDC.

Cities and towns are in a holding pattern pending a clear sign that the immediate crisis has subsided. We won’t begin to understand the impact on communities until that has happened—the SoCA reports are intended to provide a glimpse of when that day may arrive.

This report shows that mitigation efforts are gaining the upper hand, and we may be on our way to something a bit closer to normalcy. That doesn’t mean that communities can lower their guard. Extreme vigilance is necessary until we get a vaccine—as the virus can surge again before that time if we are not careful.

The key to vigilance is testing, which rose by 21 percent in the recent 7-day period, to an average of 323,000 tests per day nationwide. That’s more than double the daily tests that were conducted in mid-April, and more than triple the daily tests of the beginning of April. These tests should be identifying more cases—milder ones that were overlooked in late March/early April—which makes the recent decline in cases more meaningful.

Testing is surprisingly well spread out across the nation. Alaska, with few cases, has conducted nearly as many tests as Washington DC, with about the same population. North Dakota has run about the same number of tests per capita as New York State, and more than New Jersey. As of today, all states will be above 20 tests per thousand population. Two weeks ago, more than 30 states were below that threshold. The US as a whole surpassed 10 million tests on Tuesday.

This week I analyze a group of 19 states that began to reopen early—by May 1—comparing that group against states that reopened their economies later, or have yet to do so. These 19 states entered phase one of an incremental economic reopening by the beginning of the month, so we should begin to see the results. Many people were concerned that the reopenings would result in a new surge in cases and deaths. It was widely reported in early May that US Homeland Security projected a massive rise (nearly tenfold) in daily cases by June 1, along with a less drastic but still substantial rise in mortality. I am happy to report today that the trends are moving in the opposite direction—even in the states that reopened early.

These 19 states have a total population of 125 million, about 38 percent of US citizens. In the week ending May 13, these states saw mortalities drop by 16 percent and cases fall by 9 percent. That is somewhat less of a decline than the states including DC that reopened later (or have yet to do so), where collectively cases and deaths both fell by 19 percent.

The group of 19 were starting with much lower numbers than the other states. The early-to-open group have sustained a total of 108 deaths per million people, while the remaining 31 states plus DC have suffered 316 deaths per million—nearly three times as many. The states reopening earlier have a much flatter curve and could expect a more gradual downslope.

Even an examination of individual states that reopened does not generate much cause for alarm.

Eleven of the 19 states have seen reductions in both deaths and cases in the recent week. Another seven of the states report mixed results (cases up, deaths down, or vice versa). In four of those states, deaths are down and cases rose slightly. Additionally, the numbers are so low in North Dakota in Utah—that the mixed results are not alarming at this point. Iowa, which saw a 23 percent rise in deaths and 19 percent drop in cases week to week, raises some concern. That state has experienced significant problems stemming from meat packing plants.

Of the 19 states, only Alabama saw a rise in both cases and deaths. This is concerning, although even with the increase Alabama has been relatively lightly impacted by COVID-19 compared to other states. It’s deaths per capita amount to a little more than a third of the national average.

One of the biggest concerns two to three weeks ago centered on states allowing barbershops and salons to reopen, with employees wearing masks. This happened in late April in Georgia, Colorado, Oklahoma, and Alaska. These states were widely criticized and a surge of cases was anticipated. This hasn’t happened, as all four states are trending down in both cases and mortality. The same can be said for Florida, which was criticized for reopening beaches. Now, experts are telling us that it is safest to be outdoors because studies show that the spread almost always occurs in enclosed spaces (and UV radiation kills the virus).

The best news from the 19 states may be in Louisiana, which was one of the major centers of COVID-19 in the US. Louisiana still reports high numbers of cases and deaths, but its situation has improved substantially. Deaths are down by a third and cases dropped 17 percent week to week. Indiana, another state with significant problems, has also seen cases and mortality numbers fall.

Trends are generally even better in the states reopening later—especially the Northeast and Michigan, two of the centers of the pandemic. Cases and deaths dropped in New York, New Jersey, Connecticut, Rhode Island, Massachusetts, and Pennsylvania. In New York, deaths dropped by more than 40 percent week to week. These states continue to have far too many COVID-19 cases and deaths, but the trends are moving in the right direction. In Michigan, deaths dropped by 20 percent and cases by 28 percent.

Yet many problem areas remain—a situation that demands vigilance as most states are now moving toward first-phase reopening. Even New York State is reopening specific businesses and activities in some parts of the state today. Deaths are still rising in Illinois, which was one of the earliest states to issue stay-at-home orders. Cases are declining, but the state is still well above the national average. Deaths and cases are rising in North Carolina—albeit from relatively low per capita levels. Cases rose substantially week to week in South Dakota, even as deaths dropped and have remained among the lowest in the nation. South Dakota sustained a massive meat-packing-plant related outbreak in Sioux Falls, starting in late March. The lion’s share of the state’s problem is in that region.

By its sheer size, nearly 40 million people, California is a critical state that continues to plateau in coronavirus cases and deaths. Relative to the hard-hit states, California’s per capita numbers have never reached high levels—but these are not dropping either. The state’s problem is centered on the Southern California coast.

Coronavirus is an evolving story and the situation is changing week to week. Prior to the last week in March, nobody anticipated the massive problem that arose in meat-packing plants. That issue created significant numbers of cases in rural parts of many Midwestern states. This problem appears to be on the way to containment and the grocery store shelves are still stocked with beef, pork, and chicken. But we may not be able to anticipate the next problem—which is why the nation’s implementation of testing is so important. Likewise, policy mistakes were made relating to long-term care facilities. But these mistakes are being corrected and systems are now in place to protect these vulnerable populations—and soon we will find out whether those systems are adequate.

Thanks for reading, and I will continue to keep track of the numbers daily.