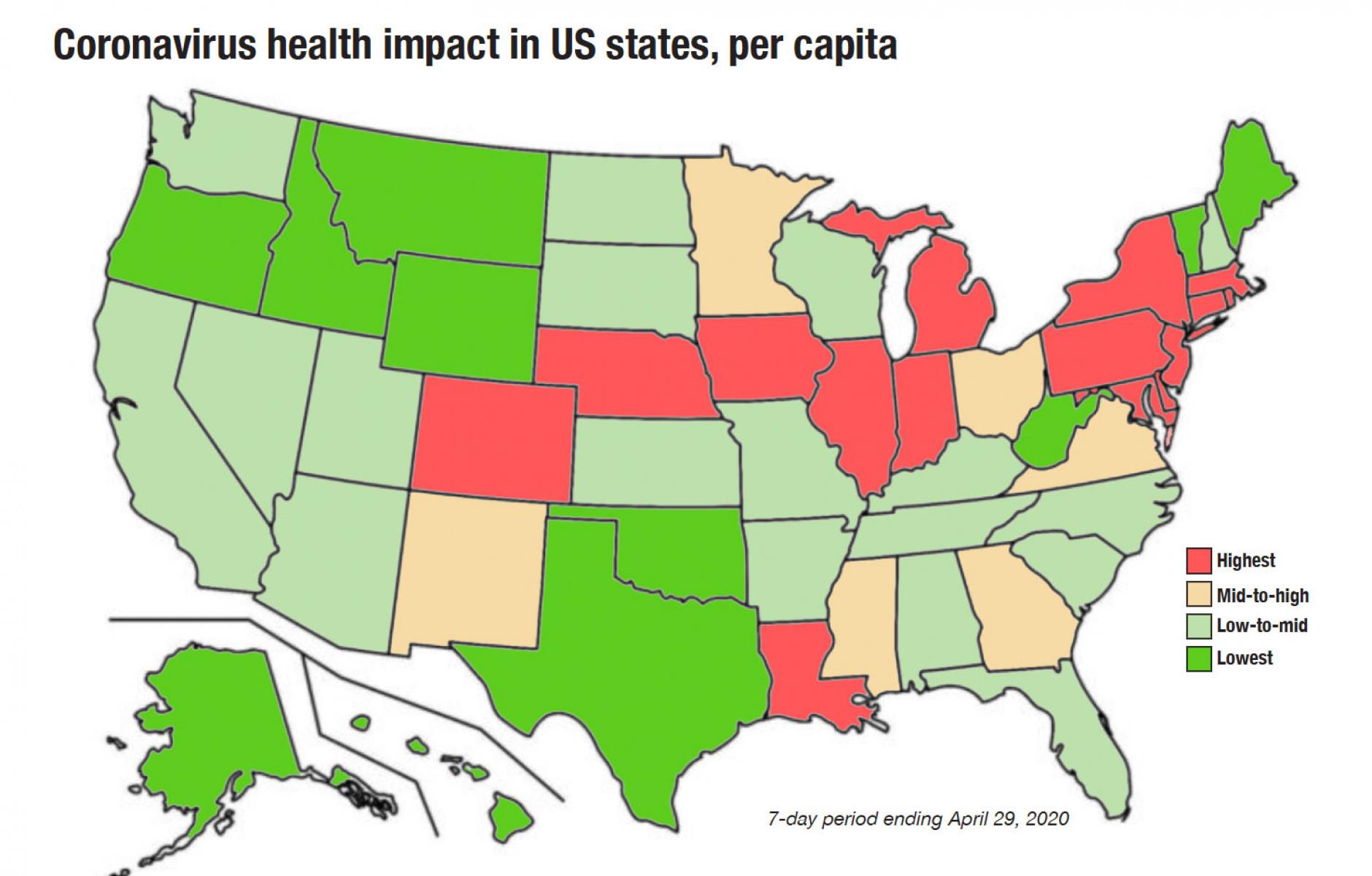 In the fifth State of Coronavirus in America report, the most encouraging trends are a dramatic rise in testing and declining mortality. But as cases rise in many states, the nation is far from out of the woods.
ROBERT STEUTEVILLE   &nbspMAY. 1, 2020

As nearly 20 states moved into phase 1 of reopening their economies, testing for coronavirus soared across America, up 71 percent nationwide week over week. Meanwhile, mortalities trended down while the number of confirmed cases in the recent seven-day period rose 3 percent.

As testing ramped up (more details below), many states in the Midwest and West saw a sharp rise in confirmed cases, which put them into a higher impact category on the map. The most noticeable change is the new large swath of red across Colorado, Nebraska, and Iowa, and that change is mostly related to many more cases identified from April 23-29. Cases more than doubled in Nebraska and rose substantially in Iowa (77 percent) and Colorado (49 percent).

In Iowa and Nebraska, the new cases are related mostly to outbreaks in meat packing plants. Colorado has a few such outbreaks as well.

Can these outbreaks be contained? The data from South Dakota indicates that is possible. More than a month after nation’s most notorious meat-packing-related outbreak began at Smithfield Foods in Sioux Falls, the state’s mortality rate remains among the lowest in the US, and new cases declined by 25 percent week over week. South Dakota changed to green, from light orange, on the map. The Smithfield plant is reopening under new guidelines designed to reduce the spread of the disease.

While the crisis varies from state to state, the good news is that about half of the states retain relatively low per capita mortality rates, and the situation in the nation's epicenter has eased considerably. Mortality in New York State declined by 28 percent week over week, and it also declined in New Jersey, Connecticut, Michigan, and Pennsylvania. Cases are down by 27 percent in Louisiana. At the same time, cases and deaths rose in other states like Indiana and Massachusetts. The nation is not out of the woods yet, and the story is unfolding state by state, and week by week. The following tables show mortality and cases for states in the recent seven-day period. 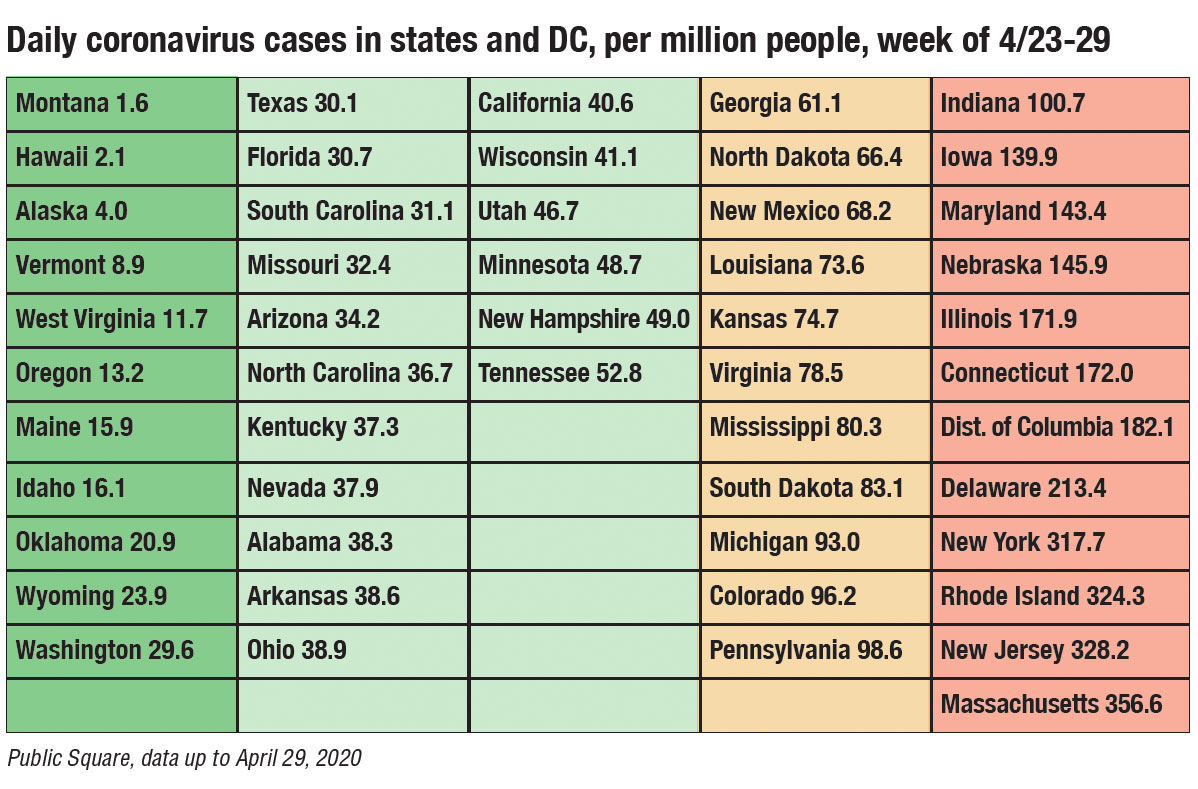 States that are reopening some businesses have mostly been relatively lightly impacted by the virus, such as Texas, which is beginning phase 1 reopening May 1. And yet Colorado, Iowa, Louisiana, and Indiana are starting to reopen despite continued high rates of cases and/or deaths. Georgia was criticized for allowing personal care salons to reopen last Friday with workers wearing masks. The situation in Georgia improved in the last week, with mortality down 7 percent and cases down 22 percent, but the impact of the reopening, if any, may be apparent next week. Other states, such as Colorado, Oklahoma, and Alaska, are also allowing barbershops and hair salons to reopen.

Testing for coronavirus is key to reopening the economy safely. Nearly 260,000 tests were conducted a day nationwide from April 23-29, up from 151,000 daily in the prior week. Testing has been surprisingly consistent nationwide—even in many states where the coronavirus has taken a relatively light toll. As of Wednesday, all states were above 10 tests per 1,000 residents with the exception of Arizona (9.9) and Kansas (9.7). Many states with the most testing have been those with the relatively low mortality and cases, including North Dakota (33.9 per thousand), Utah (33.6), and New Mexico (33.1). Most of the states have tested between 10 and 20 per thousand. See table below. 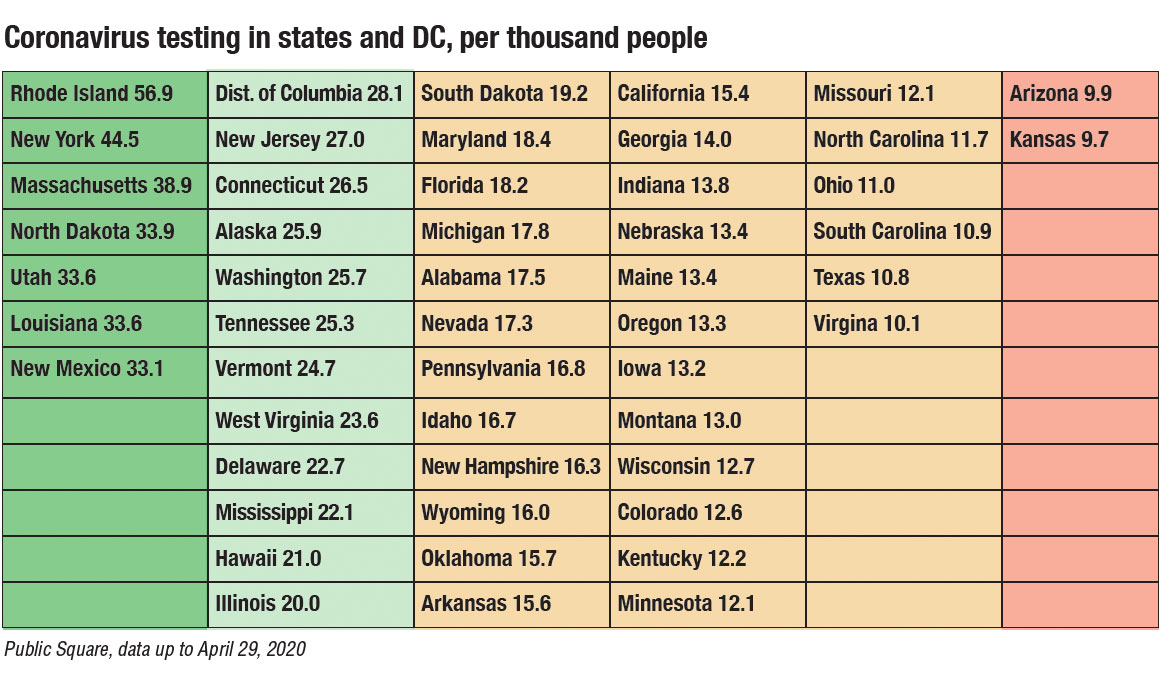 Geographically large states have a particular challenge reaching spread-out populations, but many are meeting that challenge. Alaska, for example, and the District of Columbia are very close in population, while the former is 9,300 times as big. And yet Alaska has managed to test nearly as many people (19,119 for Alaska compared to 19,229 for DC). The virus has hit DC much harder, as the District’s mortality rate is 20 times that of Alaska. Alaska found only 20 new cases of COVID-19 over the recent 7-day period.

Not surprisingly, New York has conducted more tests than any other state (872,481), and is second behind Rhode Island in per capita testing. Many parts of New York have been lightly impacted, while the entire Ocean State is dealing with significant levels of infection. Testing levels are not just related to need. Some states are fortunate in that they have more testing by the private sector. Some testing is also conducted by public-private partnerships. In my local community, we were fortunate to have a drive-through testing facility set up in mid-March by such a partnership, leading to high levels of testing that have helped to contain the virus.

Overall, the State of Coronavirus in America is decidedly mixed. The most encouraging changes are a drop in overall mortality of 6 percent and the dramatic increase in testing. The slight rise nationwide in cases—sharp in some states—is still worrying. Can states and local jurisdictions successfully use the data from the tests to trace people who have been exposed, test them, and isolate everybody who has the virus? And can this be done even as economies begin to reopen? Next week will be crucial for the nation.