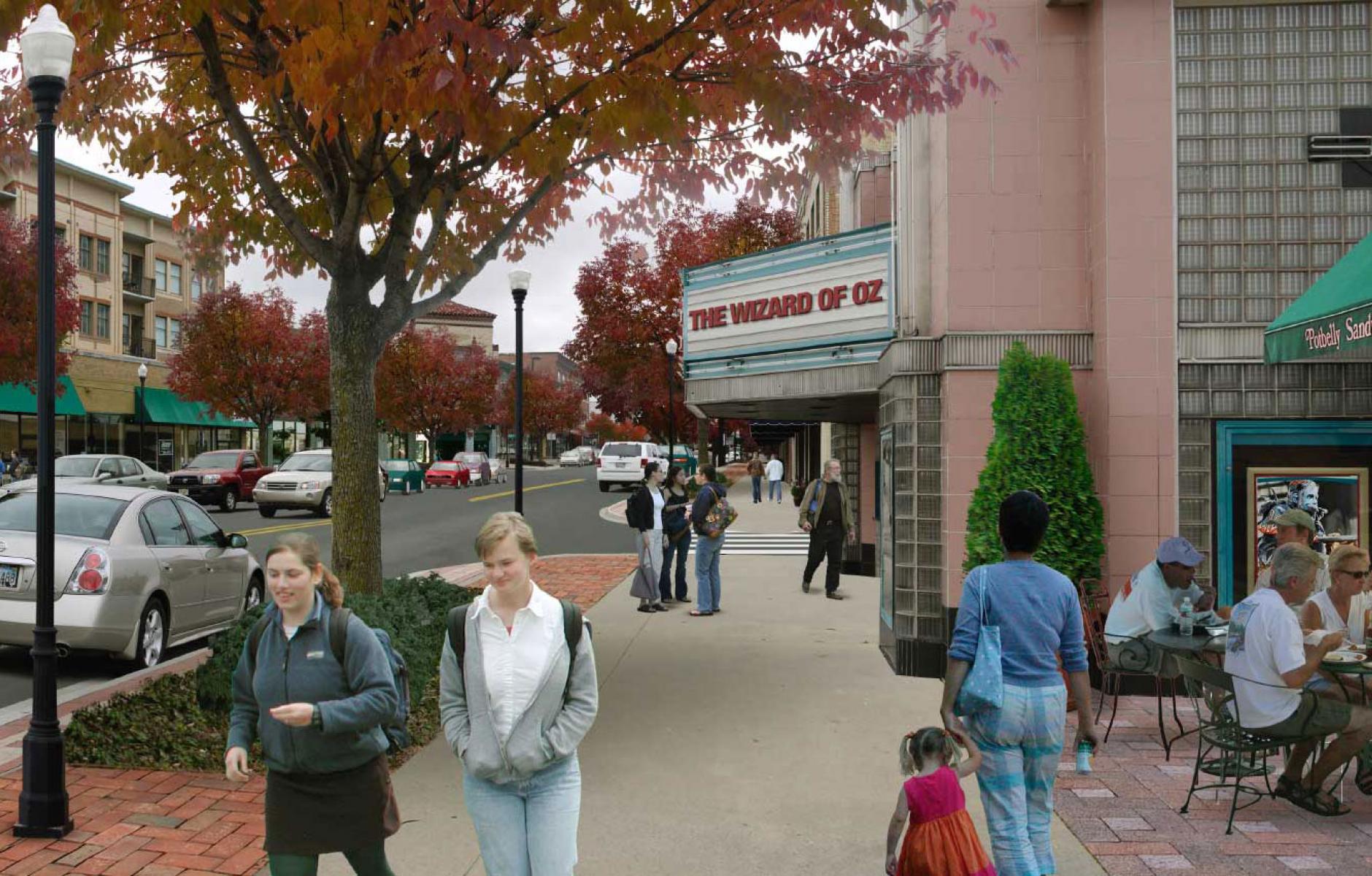 Ultimately, this crisis will highlight how much we need to come together in the real world, and cities are a big part of that.
ROBERT STEUTEVILLE   &nbspMAR. 23, 2020

Over the last two weeks there’s been a lot of speculation that cities are more dangerous places during the coronavirus pandemic—and some have concluded that cities will change and suburbs will become more popular to make communities safer in the years to come. New York State Gov. Andrew Cuomo said “the virus spreads in density” and has referred to density as the problem many times.

This discussion has been fueled by the “social distancing” method used to fight the coronavirus, and the guideline—in some cases made law—that we must stay at least six feet from another person in public.

Cities are dense places designed to bring people together. The six-foot rule is impossible to maintain, in a city, all the time. Even while avoiding public transit, people must walk past each other on the sidewalk. Putting two and two together, cities are more dangerous places in a pandemic and the very purpose of cities runs counter to safety at a time like this.

This impression is boosted by maps showing that urbanized states have the most confirmed cases. Not so fast; these discussions are premature. The facts to date don’t support the idea that cities and density correlate to danger. The maps are misleading, partly because they show total cases without regard to population. (See map below.) 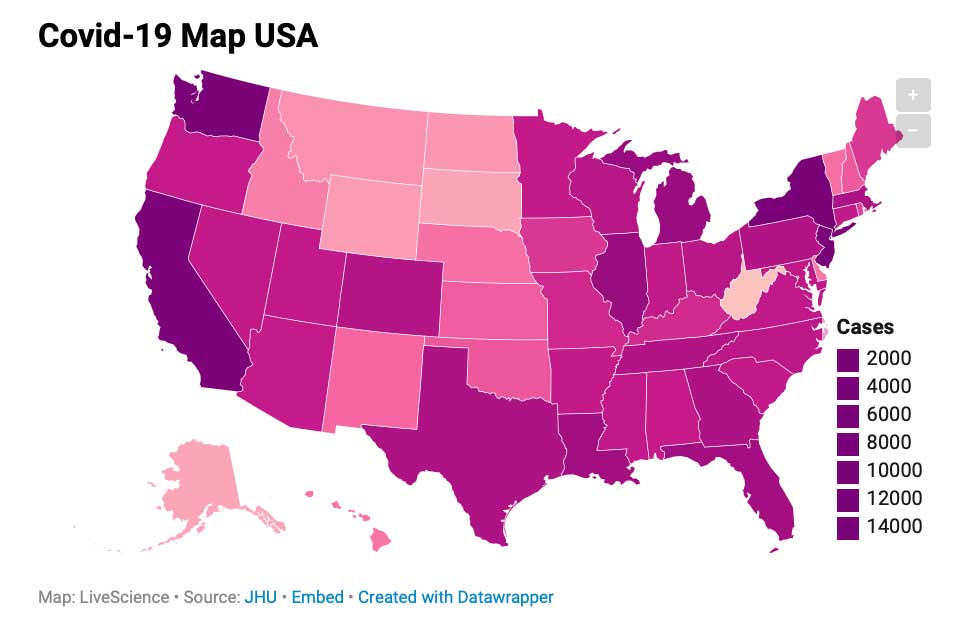 For example, the most populous state is California, with 39.5 million people. It shows up dark purple on the map. Wyoming is the least populous state, with 577,000 people. It is light pink. It appears that California is a much more dangerous place to be right now, and that impression is reinforced by the statewide lockdown that has been imposed by the governor. But hold on: As of Sunday, California had one confirmed case per 25,960 people. Wyoming had one confirmed case per 24,072 people. (Update: as of 7:30 a.m. ET Friday morning, California had one case per 12,332 people and Wyoming had one case per 10,886 people, source livescience.com).

As far as we know today, a resident of Wyoming is more likely to have coronavirus than a resident of California. That’s despite California being a far more urban state, with the large majority of its residents living in major metropolitan areas, relatively close to millions of other people. Wyoming, by contrast, is nearly all rural with no metro areas of more than 100,000 people. California also had several weeks head-start on Wyoming, as the ill-fated Princess Cruise docked February 21 and thousands of passengers got on and off. Wyoming’s first case was identified March 11.

Does this mean that Wyoming is more dangerous now than California? Of course not. We don’t know enough at this time to draw any conclusions. Looking at individual cities, and their suburbs, though, provides many more facts that would lead us to doubt the narrative that density is the problem.

Philadelphia is one of the densest cities in the nation, with 11,797 people per square mile and many of its most desirable neighborhoods top 40,000 people per square mile. Most of the city was planned and built at a walkable proximity well before modern zoning and the rise of automobile dominated transportation. Philadelphia notoriously suffered during the 1918-1919 Spanish flu pandemic—as city officials allowed a massive WW I victory parade to take place attracting 200,000 onlookers in the middle of the outbreak. (It's easy to look back and ask, “what were they thinking?” And yet we should also remember that the viral cause of the Spanish flu was not confirmed until the 1930s).

Residents of Philadelphia live in housing that is largely the same as it was 100 years ago. Rowhouses are predominant in many, if not most, neighborhoods. The kitchens, plumbing, and electrical systems have all been greatly modernized in the last century, but the basic form of the house is the same. There is little evidence that these rowhouse neighborhoods are any more dangerous, today, in a coronavirus outbreak, than low-density, leafy, suburban communities.

Ninety miles to the northeast, in New York State where I live, we have a far bigger problem. New York is coronavirus central in the US, but even there many facts run counter to the density-equals-danger narrative. New York City, which is in a class by itself in terms of density in the US, has one case per 1,035 people. Low-density, suburban Westchester County to the north—a place that is similar in many respects to Montgomery in Pennsylvania—has one case per 730 residents, tops in the nation. (Update: as of 7:30 a.m. ET Friday morning, NYC had one case per 414 people and Westchester had one case per 206 people, source livescience.com). Even within the city, the correlation does not hold: All five boroughs have similar rates of infection, with Staten Island the highest, even though Manhattan is by far the densest—it is 8.6 times as dense as Staten Island.

These comparisons are cherry-picked, but that’s the point. Everything is cherry-picked in this ever-changing situation. This may all change tomorrow, and then back again next week. The definitive scientific studies are a long way off.

Major cities do have one risk factor to a much greater degree than rural places, and that is international travel. New York City probably has more international travel than any other place in America and it has JFK Airport—the point of departure for many international flights. That fact will not change—where else would we build an international airport?—although we will learn a great deal about how to make travel safer in times such as these.

Crowding is another matter

There is no clear evidence that density, per se, is the problem. Crowding is distinct from density. Density is the number of housing units, or people living, per unit of land. Crowding is a whole lot of people gathered together in a space. During the Spanish flu pandemic, considerable crowding took place in communities of all sizes across the US. Families were larger and they lived in smaller houses. Schools packed far more pupils in a room. Saloons, assembly halls, churches, transit systems—all were crowded at that time. During the infamous Philadelphia parade, people shouted and cheered by the thousands, elbow to elbow, for hours. In this coronavirus crisis we have effectively eliminated the crowding problem. There is no evidence, that I know of, that passing somebody on a sidewalk—or a supermarket aisle—is a significant factor in spreading the disease.

We also need to look at human health from a broad perspective. Life is inter-connected, and it is no use adopting policies that theoretically reduce risk in one area yet actually increase risk in other areas. Zoning codes approved starting 100 years ago—mostly unrelated to the Spanish flu—have contributed to tens of thousands of automobile deaths and millions of injuries, year after year. Wyoming had 111 automobile fatalities in 2019, a rate that is six times that of California’s older, densest cities. And, don’t forget the approximately 75 nonfatal traffic injuries for every death, according to data from the Centers for Disease Control and Prevention. California is 42 times the density of Wyoming. Any argument to reduce density as a result of the coronavirus would be wise to take other risks and unintended consequences into consideration.

I worry about brick-and-mortar retail stores, so vital to street life and communities. Some shops—grocery stores, pharmacies, and department stores, for example—are doing very well in this pandemic. Many others may die and not open again. I wonder what is going to happen to the malls that have been closed—many were on the edge of profitability and/or solvency to begin with. We are in new territory and we don’t know the impact this crisis will have on Main Street, downtown, and suburban storefronts.

The purveyors of virtual reality are big winners. The nation as a whole is learning how to hold lessons and meetings online—a crash course that would have taken years without the coronavirus. No doubt we will be using this technology more going forward—and it has specific, efficient, and effective uses in education, health care, business, and other areas of life. That said, virtual reality cannot come close to replacing the depth of experience and understanding one gets from an in-person event. As soon as they possibly can, people will flock to in-person events again with an eagerness and exuberance that will surprise us all. If anything, this pandemic will make us appreciate face-to-face contact even more than we did in the past.

For the time being, cities have lost most of their advantages. There is little to do in New York, the city that supposedly never sleeps. Nature—and the virtual world—are suddenly the only games in town. This is unsustainable for long.

We need to all take a deep breath, get through this difficult time, and wait for perspective. Some perspective may take months or even years to come. Cities are long-term projects, and, as others have pointed out, they have survived uncounted plagues—many of which have been far worse than the current one. Let’s resist the urge to come to long-term conclusions in the midst of a short-term crisis.