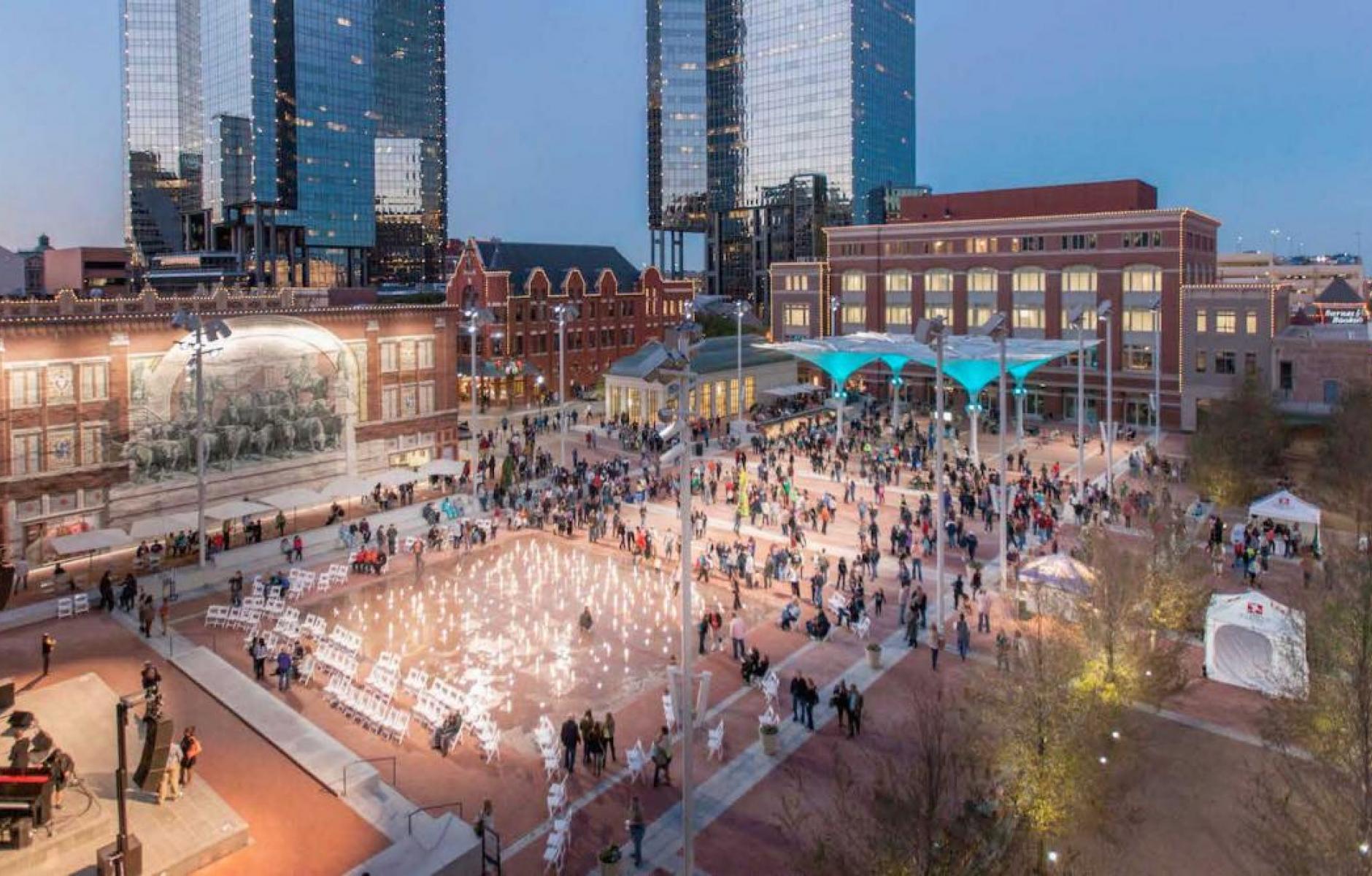 Sundance Square in Fort Worth, the crown of its new urban revitalization of downtown.
Research

New Urbanism planning principles have been incorporated into comprehensive plans all across Texas, and this has begun to have real impacts on people and places.
ROBERT STEUTEVILLE   &nbspDEC. 6, 2019

I get a lot of emails from an academic website. I’m not an academic, but occasionally they alert me to interesting papers. A five-year-old thesis paper, by a masters public administration student at Texas State University, is worth exploring today for what the paper says about New Urbanism—and for what has happened since it was written.

Has New Urbanism taken over City Planning? A Description of the Use of the Principles of New Urbanism in Comprehensive Plans, was completed in 2014 by David Serrins, now with the Texas Commission on Environmental Quality, according to his LinkedIn page.

Serrins looks at every Texas city with a population of at least 200,000 to see how extensively new urbanist principles are embedded in comprehensive plans. At the time, only 12 of the 13 cities had a comprehensive plan (Houston had never adopted one—more on that later).

Serrins’s paper offers a good and clear summary of the New Urbanism. He identifies compact urban form, community character development, and transportation as the three “foundational” themes of the movement and breaks these down into principles that are on-target and fairly comprehensive.

In addition to the six cities that included all of the principles, two more included substantially all of the principles. “For these eight cities—Dallas, Austin, Fort Worth, El Paso, Plano, and Irving, Garland, and San Antonio, New Urbanism is a driving force in planning,” the author reports. Entire sections of the comprehensive plans in several of these cities read as though they were taken directly from NU literature, he writes. Plan El Paso goes as far as to include the Charter of the New Urbanism in one of its appendices.

Since 2014, all five of these cities have adopted comprehensive plans, including Houston. While I did not use the extensive methodology that Serrins describes in his paper, my conclusion is that every one of these new plans is shot through with the principles of New Urbanism—making Texas 13 for 13.

Texas is fairly laisse faire about planning—cities are not required to even have a comprehensive plan, for example. Therefore, the adoption of new urban principles as foundational ideas in urban planning is entirely voluntary and significant. Serrins attributes the widespread adoption of New Urbanism to planning education. “With a full generation of planning graduates indoctrinated with principles of that define New Urbanism and staffing local planning departments, city plans are replete with these eleven principles.”

And yet popularity among planners alone is not enough to explain the New Urbanism taking over city planning in Texas. Citizens, developers, land owners, design practitioners, and public officials also needed to embrace these principles—otherwise they would not have been willingly adopted in comprehensive plans by local authorities.

Another issue is to what extent any of this has been implemented. Comprehensive plans, by themselves, don’t do much. They must be backed up by changes in zoning and infrastructure investments that reflect the new thinking. To the extent that I have knowledge of actions taken by large Texas cities, those actions seem to back up the paper’s analysis. El Paso, Laredo, Dallas, Fort Worth, Garland, and Austin have all implemented New Urbanism projects, policies, and processes. El Paso and Laredo, for example, have both won Charter Awards for their comprehensive plans—which have been accompanied by form-based codes and infrastructure investments. Fort Worth has rebuilt its downtown according to new urban principles, a project that also received a Charter Award.

Judging by the Charter Awards, Texas cities have been progressive in adopting new urban principles and applying them to infrastructure and development—yet I don’t think Texas is an outlier. An analysis of comprehensive plans across the US would likely reveal a substantial movement towards new urban principles in the last quarter century since the CNU was founded. In the case of Texas, and Serrins does not think the change is a coincidence, and neither do I.

This idea of imbedding new urban principles in comprehensive plans has been little remarked upon over the years. It takes years for plans to be adopted, and then years for the impacts to be realized. And yet comprehensive plans do have far-reaching consequences over time. This is New Urbanism’s quiet achievement—and one of its most important.